Ok Its warming up! I hoep to see a bunch of cooks!

First prize
2 Bottles of each of Smoke on Wheels new Marinade...Two of the Bottles are signed by Kim and ANdy!
Second Place 15 dollar gift card to Big Poppa Smokers!
Third prize two packs of firewire skewers!

Like BP said the weather is warming up, I know a lot of you have been itching for some grill time so here is the perfect chance to get your fix in and maybe score some loot, you can't beat the entry fee either!

Anything goes, I like the creative stuff that nobody really thinks about on a pellet cooker but the standards are great too!

Have fun, cook the way you want and good luck to all!

Oriental-inspired pulled beef
This was something that just kind of popped into my head. I am going for the "peanut beef" kinda flavor, but mixing in some smoke flavors as well. This is definitely a keeper in my book.
Chuck Roast

On to the MAK - Pellet boss programmed for 5 hours on SMOKE then 215 until whenever.

Overnight - Then boated with a bottle of Teriyaki

Bent, how did it taste? i been wanting to use peanut butter on stuff? did the rub get to the meat through the peanut butter? it looks good.

It was good, You can taste the five-spice, smoke, and the peanut butter in the background, with the teriyaki in the foreground. I might dilute the teriyaki with some beef broth next time. I couldn't keep the Mrs out of it.

another yummy dinner for me and mrs.

Been wanting to do something with Tri Tips for a few weeks now...

First the Tri Tips were seasoned up and back in the fridge overnight.

The next day (Friday) I started preparing the meal. First up was BP's Steakhouse Mushroom Sauce. Onto the smoker at 350.

What's wrong with the previous pic? Walking back to the house I was reviewing the shot on the camera and something wasn't right....duh, where's the seasoning? Back to the smoker for a quick shot of spices and magic pepper dust!

Added some BP style baked potatoes to keep the the 'shrooms company.

After about an hour (stirred twice) the sauce was done and replaced on the smoker with BP style asparagus (detecting a trend here?) The heat was raised to 400.

Once these were done, the heat was dropped to 250 and the Trip's were put on, heading for an IT of 140. (The potatoes and 'gus were FTC'ed)

The Tri Tips were pulled, rested and seared.

I carefully sliced the meat, across the grain, saving one piece 'steak style'. All plated up:

After the shot, I sliced this piece up as well and re-topped with sauce, it then ocurred to me that would have been the better plated shot! (but I was too hungry to go get the camera again.)

Mea Culpa...Due to technical difficulties too boring to recount, I overshot my intended IT of 140...while this was fine with everyone else, I would have preferred med-rare. The amazing thing was how tender and juicy the meat was, Tri Tips are Awesome!

So what to do for dinner Saturday? Leftovers! Naan bread, tri tip, basil, asparagus, mozzarella, tomato's, and garlic EVOO

Everybody got to pick their own style for toppings and then their own finishes, I went with Hot Squeeze and magic dust (cayenne/habanero mix). These were awesome! My wife Nancy had this idea and a few more to try....but that will have to wait for next time, not enough leftovers!

Rip How good are those mushrooms? Also tri tip is not great med rare if you ask me....pink is good you may have overshot that by only about 2 or three degrees...well withing my standards!

Big Poppa said:
Rip How good are those mushrooms?
Click to expand...


They were great! While waiting for the Trips to be done the mushrooms absorbed a lot of the liquid so next time I think I'll mix in a little of the juice from the Tri Tips (and there was plenty!) before topping the meat. I wish there had been some left for the Naan bread the next day!

Wow!! Everything looks excellent!! I've not had the chance to do much smoking in the last week or two.. hope to catch up.

welp, sunday night dinner and no kids. so quiet. just me & mrs and "the good, bad & ugly" movie. love clint eastwood and john wayne.
a little rib action in order. gangs all here.

after 3 hours on, time to foil and sauce them.

after 1 more hour on foiled. then unfoiled them and back on for one more hour.

ready to be cut up.

.
another adventure in the great rib experiment.
p.s. i like them better foiled with honey, butter and brown sugar. and i believe 3eyz is my rub of choice for my ribs. so far.
Last edited: Feb 20, 2011

Rip, that leftover Tri-tip on the Naan bread is the star of your show.

I went with a Hawaiian/Pineapple theme this evening.

I took two pounds of fresh ground pork & mixed up some breakfast sausage. I flattened it, added a layer of cream cheese, a layer of cooked ham, then a layer of chopped pineapple. Rolled all up along with a low sodium bacon weave. 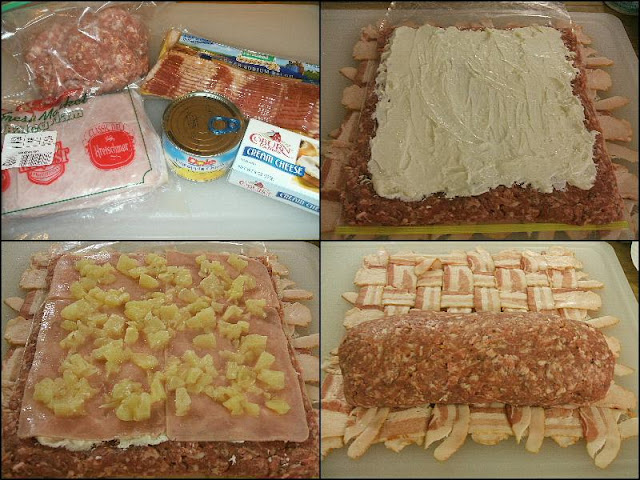 We made a batch of pineapple slaw a few weeks ago (Big Poppa inspired) and really liked it, so I thought I'd try taking it in a different direction by adding smoked pineapple. I was not disappointed - this was really good!

I started by loading up a Fire Wire skewer with some pineapple chunks and puttng it on the grill to smoke alongside the Fattie.

While that smoked, I made the slaw. Dressing used a cup of homemade mayo, a bit of mustard, sugar, cider vinegar, pineapple juice and a splash of soy sauce. I added the smoked pineapple just before serving.

The fattie was sliced. 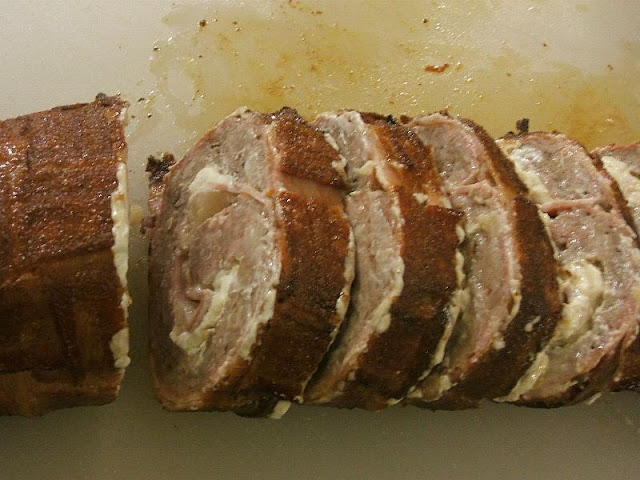 The bread choice was obvious; King's Hawaiian Rolls (toasted), then served with the Smoked Pineapple Slaw & some potato salad. 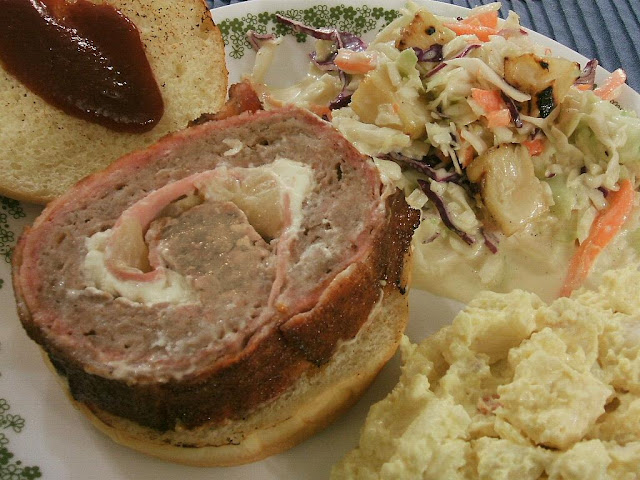 looks good TentH. nice. wish i could have some.

Great tent when I grill the pineapples I dice them afterwards for a less dominant taste....give that a try...looks absolutely fabulous!

Where I come from, chili has beans, the title is in deference to other regions.

Started with 2lbs of hamburger and an onion. Placed on a Frogmat and sprinkled with seasonings, then on to the smoker for about 25 minutes on smoke (~160-165). Any longer and the meat starts to dry out.

Meanwhile I started the chili base on the stove; tomatoes (crushed), garlic, cayenne, dark red kidney beans, chili powder, ground black pepper, and a cup of beef bouillon...a little this and that, seems to be different every time!

Once the hamburger was ready I dumped it and the onions on a cutting board and chopped it all up. Then it was added to base and simmered for hours.

While the chili (with beans!) was simmering, I whipped up a side dish of Jalapeno Quiche.

As you can see here, it's also ok to just stir it all up and dump it in!

Makes a great appetizer too!

While everyone is eating, dessert was out bubbling on the smoker...

Classic peach cobbler with some twists...honey and cinnamon were added...and fresh blueberries were tossed in as well. On to the smoker at 375 for ~50-60 minutes.

A little ice cream and oh man was this tasty! Believe me, the entire batch was gone by bedtime.

Wow, everything looks good, I want some of Rips cobbler!

I have nothing this week, I did not cook on the grill at all. I hope someone else enters to get the 6th.