Lets go for the golden egg this week....lets knock it out of the park....How about if we set the standard for the best cooks on the planet? HOw about global warming and world peace....ok Im getting carried away but hows this for an idea?

everyone else that posts their cooks gets $5.00 store credit....Thats right Im paying everyone to post.

Also I love Carter Rip and Deb but somebody gun after them.....make them reach next week! hahahahahah
H

Pics coming... Dinner with Mista on deck!
I

Im in.... Looking forward to seeing some good cooks.

I'm doing ribs and looking to get freaky with some chicken.
I

Look forward to seeing the goods Sparky.... You have been hanging out with the pro's lets see what you picked up. Like I said I have short ribs that are not very short and a hand picked 7lb brisket both from the same animal. A bunch of fresh wild leeks, not sure just what is in store for them yet but they will be in the mix.

I gotta a big butt wanting in on the game!

I ran them for about 45 minutes on smoke, then set the MAK to High and put on the grillgrates
I took them to about 130F IT
Sorry no action shot

We're committed to going to Mom's for Easter, so no pellet cooking for me on Sunday.
Last edited: Apr 22, 2011

Ribeye Whole Boneless Roast with all the Trimmings

Our friends brought me a 12.5 lb Beef Ribeye Whole Boneless Roast to play with! Have never done one so looking forward to the experience and what better way than to have one dropped in your lap

Portioned the Ribeye into 3 meals. Two roasts and some steaks. Seasoned one roast with Garlic EVOO and some Fagundes Prime Rib & Roast Seasoning. Vacuum packed them, put one roast and steaks in the freezer for future use and refrigerated the seasoned roast for 2 days.

Removed from fridge 45 minutes prior to cook. Preheated the MAK to 240º using Pure 100 Oak pellets. 2 hours later, rubbed some baking potatoes with Garlic EVOO and Fagundes Seasoning. Placed the spuds in an Infrared Roaster for 90 minutes on high.

Pulled the Ribeye roast at an IT of 135º and rested under a foil tent for 30 minutes.

Meanwhile, steamed some fresh green beans and sauted some mushrooms and onions.

Sliced and ready to eat. The money $shot ... A slice of Ribeye roast, baked potato, Sauted mushrooms/onions, and steamed fresh green beans ... Man, that meat was to die for!! Why go to a restaurant when we can eat like this at home ... Course, the friends that brought us the Ribeye Roast joined us for the feast

So a 4 day weekend gives me time to do some prep.
Last night I sectioned out my beef ribs, I thought about cutting them in half but the one end was really thick so I left them whole they are about 10" ribs. Used PM and 3EYZ wrapped and refrigerated.

Next was the big brisket, did the same thing used PM and my own rub. Wrapped and refrigerated and will inject it tonight.

Sunday will be an early morning, start the grill 4am and then off to scout turkeys for a father son hunt that I am guiding Monday am.

A little dinner for the crew.

GLAD it friday, ya ho.... welp, daughter when to costco. came home and said "dad, fire up your old friend". okie dokie.

on went dinner w/ some oak pellets thrown on.

captain, the crew wants their daily rations of ale. FT's all around matey.....

on thursday, my wife asked me what i am going to do for easter. i said, eat well. she told me that i should do a act of kindness for ppl. ok, well i cook ribs pretty good. so, my act of kindness is cooking ribs for the ppl that touch my life on a monthly basis. i made ribs for my doctor (working at hospital), shawn (my barber), luke (my sushi roller), harly (my tattoo artist), jag (my butcher), dan (the guy who gives me good deals on veges at the farmers market) and one for my wife. away we go.

i got to start getting this stuff in kilos.

wrapped 2 racks w/ foil and good stuff. started basting the rest of the racks at the 2 hour mark and every 1/2 hour after that.

is there not a more beautiful thing than a MAK full of ribs. NOPE.

boys all lined up. my wifes ribs were given to her for lunch. left rack ala natural, 2nd cherry pepper jelly, 3rd mak whiskey sauce, 4th thru 6th home made sparky sauce.

wrapped up and ready for delivery. easter ribs for ppl who take care of me.

I'm working easter sunday so today we did a pork butt and made pulled pork sandwiches. I fired up the MAK with hickory around 11 am and rolled the smoke for two hours before bumping the temp to 255°.

I saved the juices from the pan, seperated the oil from the essence, discarded the oil and put the liquid goodness back into the meat

Good show everyone. Hey Sparky whats the count so far this weekend? I count 7 racks in the last post, all look taste.

2 racks friday, 7 racks yesterday and ___ today. but who's counting. well, espresso is getting cold and i got some smokey, smokey going on in the backyard. cya all later.

Per Rips recommendation I just had to enter this weeks contest. I dubbed our second cook our "Good Friday Pork Extravaganza!" Having to work the weekend and not being able to wait until next week to have my second cook we decided to make pulled pork sandwiches and have company over. So here we go....

Thursday we ran to Costco and picked up a 14lb pork shoulder. I cut both pieces in half to give us 4 equal chunks and seasoned it all with EVOO and Yardbird.

Now this was new for me. Up at 6am to start what was going to be an all day smoke! And yes, the forecast of my weather station was correct. Just like my first smoke the weather was awful and it rained and rained and rained. That night we had some wicked thunderstorms roll through, the northern end of that line that spawned tornadoes damaging St. Louis airport.

Onto the Lil Tex at 225 with Hickory About half way through....

At 4pm with an IT of 195 I foiled, toweled and place in a cooler until 6pm. I used this time to make Nepas Baked beans recipe. Now, if you've never had baked beans like this you have no idea what you're missing out. Man oh man were they incredible!! Thank you Nepas!!!!

Here is what the pork looked like just before I let the hounds loose...

It was awesome! Man are we loving our smoker, as are our friends! I offered the pork with 4 sauces, two of which were homemade using recipes from amazingribs.com I made his KC Classic Recipe as well as the Carolina Mop Sauce. The other two sauces were Sweet Baby Rays and Cookies. Hands down the homemade sauces were preferred by everyone.

The pork itself was some of the best I've ever had. (I might just be jaded though) It was juicy and flavorful. The bark was crisp and dark. Incredibly flavorful as well!! I didn't make the same mistake with our first ribs. It wasn't salty in the slightest. Everyone was quite impressed I might add!

What a great way to cook!

Even though some of these were seen in my other post, I wanted to officially enter the fray!

Easter get together with family, 7lb pork shoulder and 5lb brisket flat.

Shoulder coated with Mustard, rubbed with a variation of Meatheads Memphis Dust. Last night we had ribeyes with Montreal seasoning that my wife and I thought were delicious so I used it on the brisket, first a coating of EVOO. First overnight cook on the MAK, fired it up at 9:30p, ambient temperature 76 degrees.

Awoke at 1:30a to pouring rain, had to re-position the MAK as the grill was half covered, wasn't expecting rain! However, the MAK was holding temperature at 200 as I had programmed. When I awoke, brisket was already at 172, however my pork was lagging behind in the stall around 158 degrees. Crutched the pork at 170, the Brisket at 180, and they both came to prefered temp almost at the same time. Proceeded to FTC.

While awaiting the brisket/pork to rest, hot smoked some italian sausage.

After 90 minutes in the cooler, pulled the pork out, pulled it. Then brought out the Brisket sliced it and by that time the sausage was ready. Brisket was one of the best I've produced, good smoke flavor and moist. I'm still having issues getting my pork to have more smoke flavor, but it was great nonetheless.

I have complete faith in my MAK now, I look foward to further overnight cooks!
Last edited: Apr 24, 2011

Ok, lets see if I can post these pics..

On the Weber with a packet of cherry pellets, Vidalia onions, zucchini, red and yellow peppers and several cloves of garlic. Oh, and some fresh kielbasa catching some smoke too.

Plated the tenderloin with red Quinoa mixed with the smoke-grilled veggies and a spring green salad topped with a slice of smoke grilled pineapple.

This past week was my Mom's B-Day so today was a combo Birthday/Easter dinner.

I picked up a whole pork loin and trimmed it up into a crown rack. Rubbed with Sage, Salt, Fresh cracked Pepper, Rosemary & Nutmeg. Put it on to smoke for a while using Apple Pellets for smoke flavor. 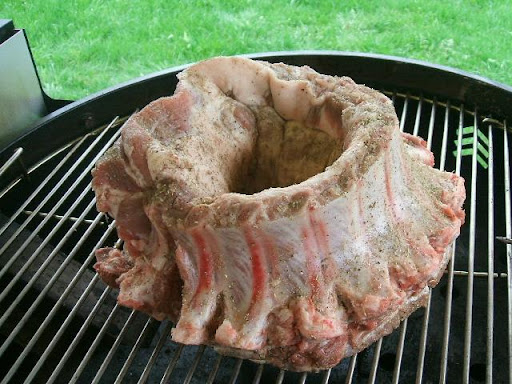 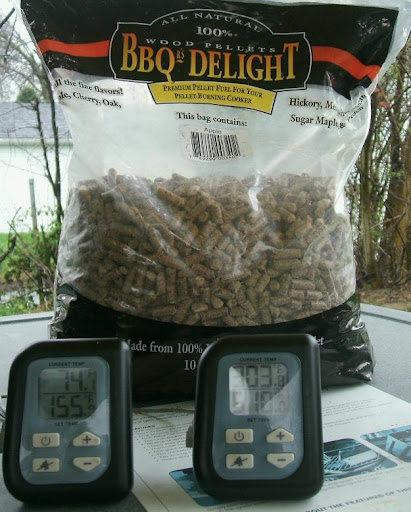 Cut up some apples & onions, sprinkled on the same herbs as the pork then added some beer, brown sugar & cider vinegar and into the smoker to braise for an hour or so with the roast.

When the roast's I.T. temp hit 156° I turned the heat off and let it ride. FTC'd and off to Mom's house for dinner.

It made a beautiful presentation. 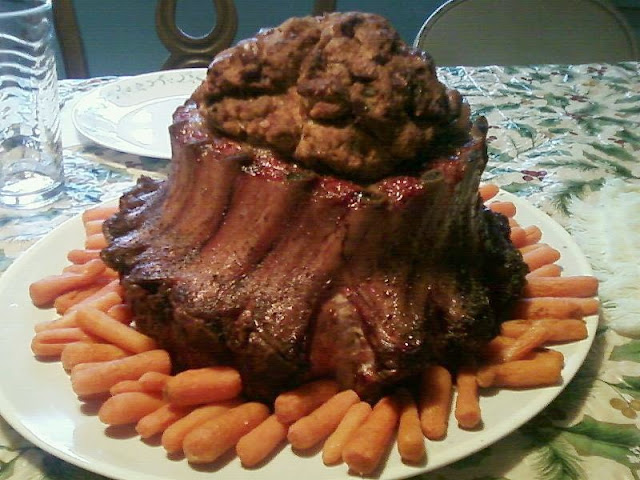 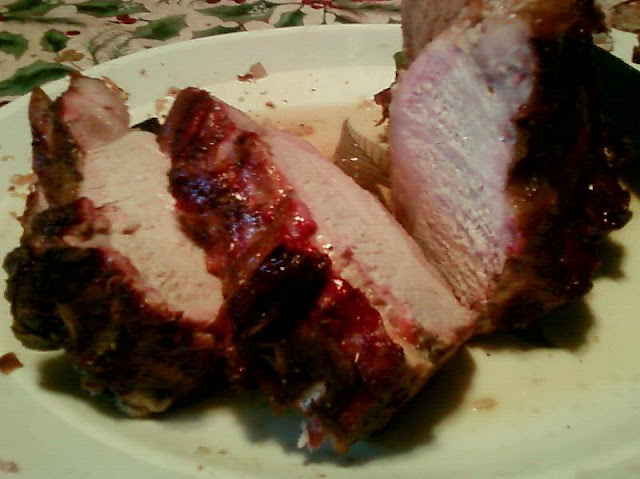 Served with some braised apples & onions on top and plated with the stuffing, Sour Cream & Chive Mashed Potatoes & Roasted Carrots. 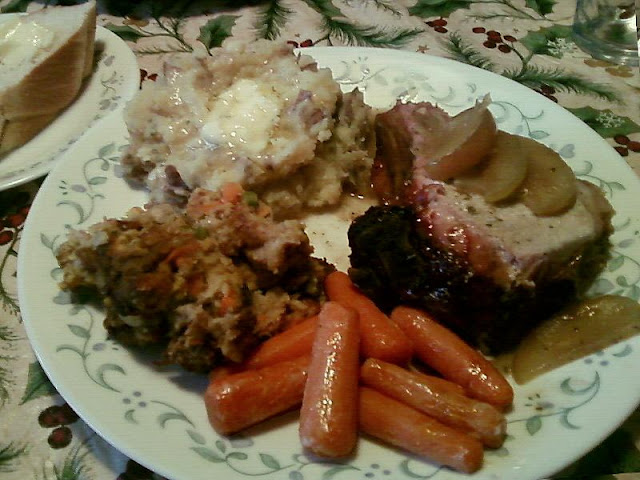 It was tender, juicy & well worth the extra prep time!