Im late but there is a contest this week

Swamped at the world food championships cooking with the Jack Daniels winning Pig Skin BBQ sorry for the delay!
Just couldnt get to the computer yesterday

$5 Credit to everybody else that enters
W

What to do with left over pulled pork why not a Pizza.
The players, pull pork,pizza dough,jalapeons,tomatoes,BBQ Sauce, cilantro,cheese

Let the dough rest for twenty

Roll it out on the pizza stone

Got to have more cheese

Ready for the smoker

Continued
Off the smoker and resting

Plated man it was so good

That has to be one of the nicest looking Pizza's I've ever seen. Being new at making pizza I almost feel as though I should buy a pizza/dough press to get that perfectly round pizza. I just can't seem to master the dough shaping process.

Porterhouse for 100 miles of cycling

I am going to ride 100 miles Saturday, from Dolphins Stadium south to Miami and the up the coast to West Palm Beach

Start with a couple of Porterhouse steaks, rubbed with JG Raspberry Chipotle
on the MAK 2 Star on HIGH with BD Mesquite and grill grates

I only have to ride 70 miles tomorrow.

Let it sit for a hour or so.

Oh ya the flour has some good stuff

Into the fridge to set up

Fried up and into a warm oven.

Now the Sammie. Some Cuban bread. The Dijon sauce in both sides

Got the lodge griddle heating in the mak

Onto the mak with a brick to press

Lets plate it up. Cuban Sammie with Onion Rings and Potato Salad.

I have been meaning to make this, I have never had it before so I looked at a bunch of recipes and came up with this.....

chopped up the bacon ends and into the MAK griddle (I love this thing) to get crispy and render the fat, gave it a little time and then added the chicken to catch a little smoke

after the bacon crisped up I removed it, added a little oil and chicken went in to brown

chicken came out and the pepper & onions went in, then the garlic

while all that was happening ..... the rest of the ingredients went into the dutch oven, added the pepper/onion/garlic, some rice and topped with the chicken

I was going to finish it off in the MAK but it didn't want to hold temp well (against my better judgement tried some new pellets, fail, shouldn't mess with what works well) so I finished off on the stove......

almost everybody in the pot

Legs went into the vacuum tumbler with Carolina Treet and a cup of water...

Went for 20 minutes of tumbling...

Meanwhile I took out some frozen ravioli stuffed with chestnuts, prosciutto, and apple. Each one wrapped with bacon and coated with Big Poppa's Happy Ending rub...

After tumbling the legs went on to the PTG on "smoke" for 20 minutes...

And so did the ravioli...

20 minutes later I pulled the ravioli off the PTG and turned it to high to grill the chicken...

Then brushed the ravioli and into the oven broiler for 10 minutes. After 10 minutes I pulled them out and brushed some more butter on them...

Back to the chicken. I continued to grill on high and turned every few minutes...

Yesterday I cooked for some friends: 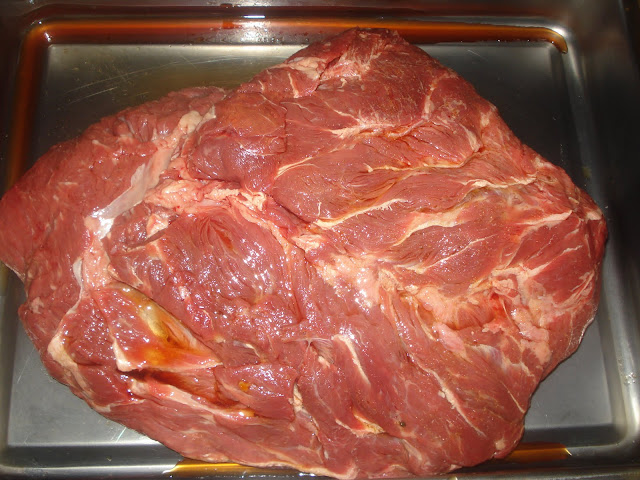 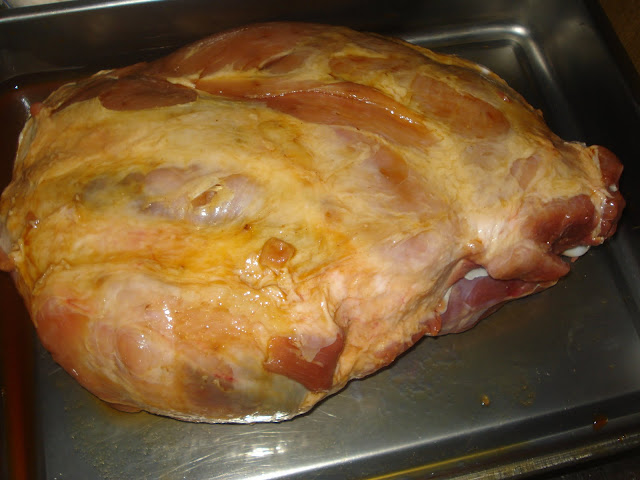 Smoked with cherry and hickory pellets at 250F. 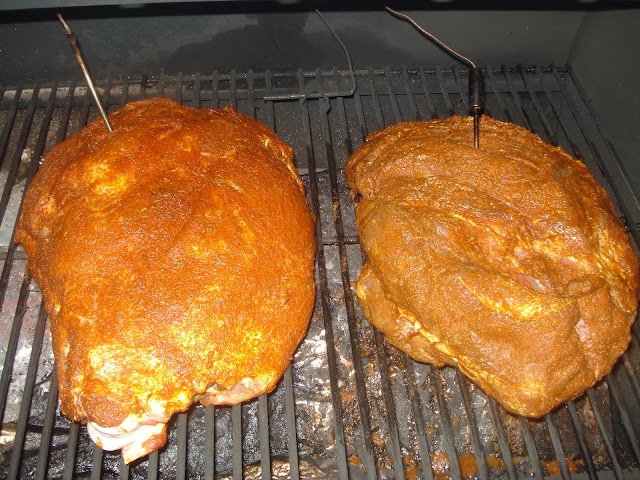 After 11 hours I foiled the butt. 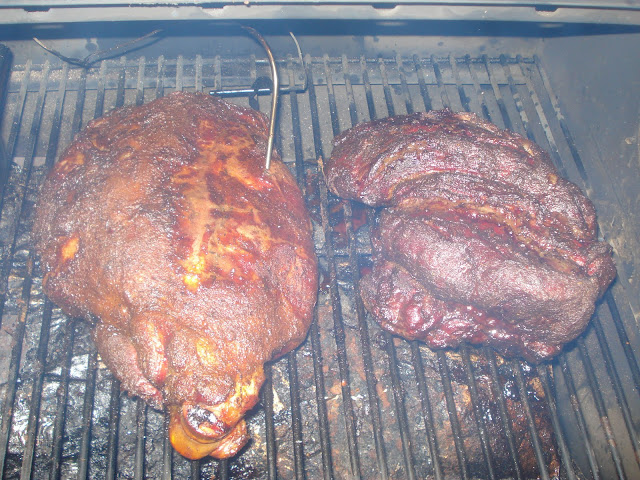 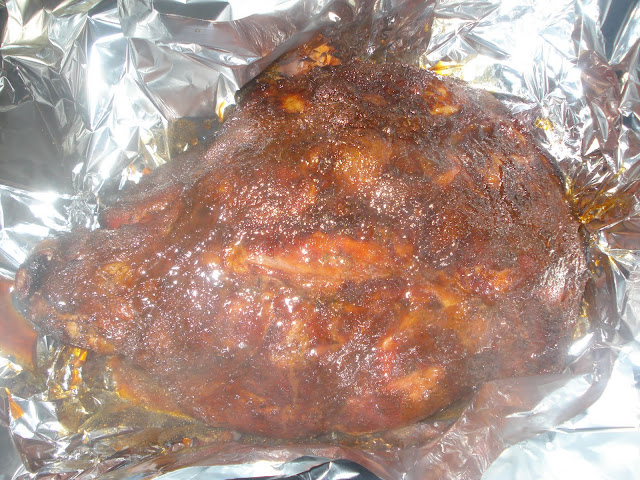 After 12 hours the beef was put in an aluminium pan with onions, bell pepper, garlic, mushrooms, a bit beef stock and red wine, then covered with foil, too. 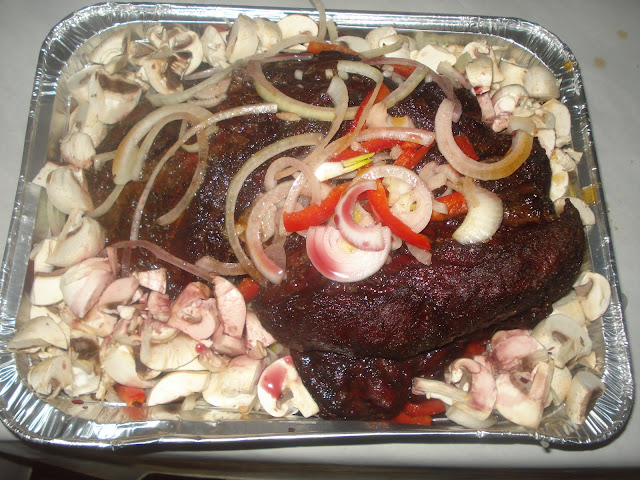 The beef was pulled in the sauce of the pan. For the butt I offered a South Carolina mustard sauce, a Piedmont-style sauce and an Eastern North Carolina vinegar sauce.

The chuck roast before pulling: 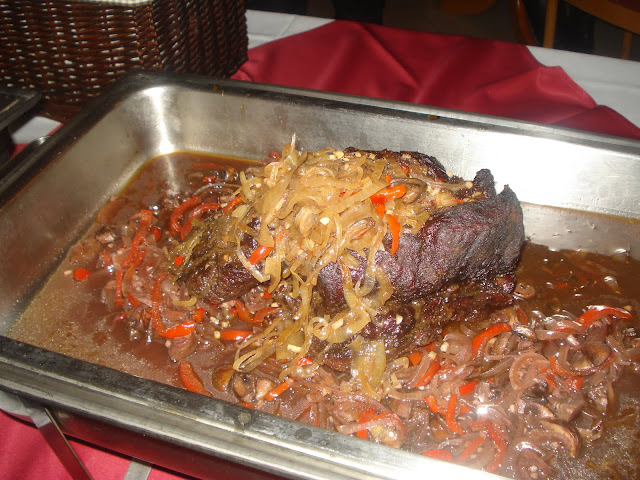 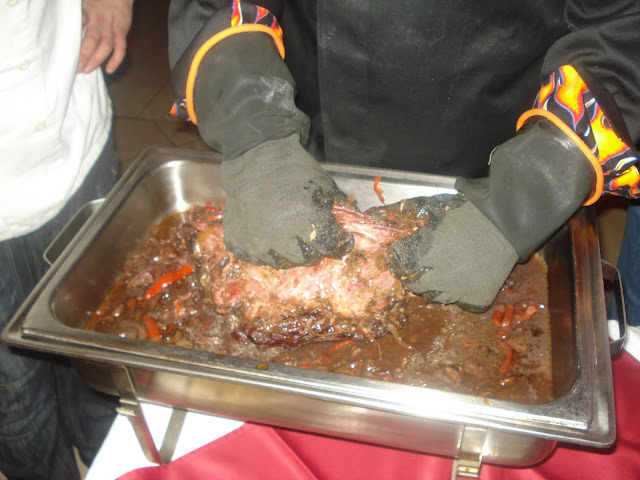 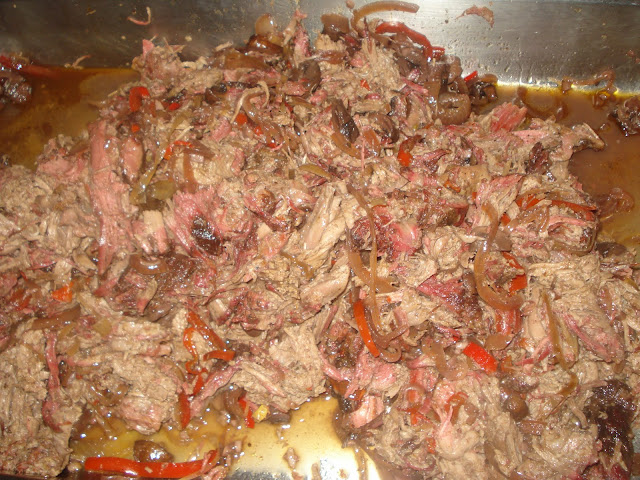 ...and here's the pulled pork: 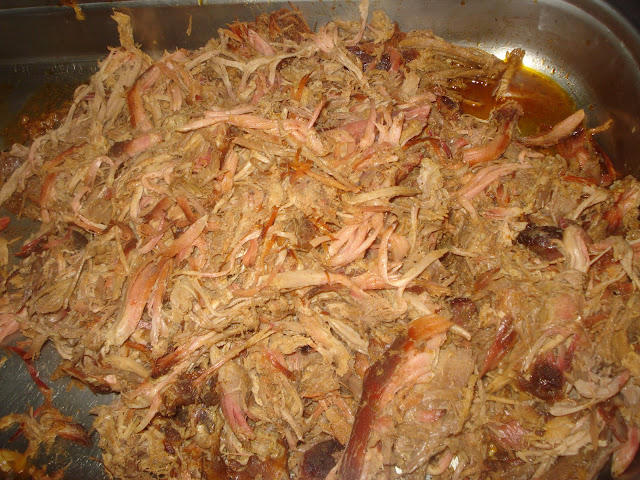 some cream cheese on the counter to soften.... then mixed up some pretzel dough ...... while that was rising made some smoky beer cheese (Cliff's recipe http://www.pelletsmoking.com/pellet...day-beef-sticks-smoky-beer-cheese-spread-766/ )

(shhh, don't tell anybody about that lower fat stuff in there)

shredded 1/2 of each of the cheddars, put them, the cream cheese, the beer and the rest of the ingredients into the food processor and blended all up....... into the fridge to rest

got the MAK heating.....
rolled the dough into 10 strips, attempted some pretzel shapes, dipped into a baking soda, warm water, egg white solution (I'm too chicken to play with lye), then a little happy ending over 1/2

I tossed some chicken wings with some Money then into the grill they went. A few minutes later the pretzels went in
Almost done

everyone finished up at the same time, tossed the wings with some Mike's Hot Honey & lime

SO it's been awhile since I have had the chance to cook life has been crazy busy. Decided I wanted some smoked beef.. so I got me this.

Started up #855 and as soon as I turned her on I heard a whine from the auger... Uh Oh. Its been 3 weeks since I used her and the pellets in the Auger caught some moisture and jammed her up. At first I panicked but a quick youtube search and there was Mak Daddy giving me detailed instructions on how to pull the auger and fix it up. one word of advice is when putting the fan back in place make sure its facing the right way!! ( Dont ask me how I learned this ) So time was short cooking. so Crock pot cheat.
Onions, red wine, Cumin and Nutmeg.. as well as some Money rub

Got the slicer out

Simmered the sliced beef for 2 hours in the crock pot.. plated up with salted potatoes, garlic toast and some greens.

My first brisket... Never been a big fan of it but my wife is from Texas so I am going to have to learn I guess

Trimmed ready for rub and then the MAK
View attachment 1744

After about four hours I cut the point away from the flat and made burnt ends.
View attachment 1746


Ok the burnt ends were out standing... The sliced flat... Aka shoe leather... Not so good so back to the drawing board on that

Into the MAK they go

Thanks for looking!
D

Picked up a 4 pound piece of flat on sale and thought I would give brisket another try. My previous attempts at this have been shall we say...AWFUL! Tough and dry would have been a compliment for my earlier briskets. For this one I used a basic injection and rub.

Injected, rubbed and ready to go on the stoven at 250 with hickory pellets.

I had to let it do to 210 degrees before it probed tender. Here it is after resting 30 minutes.

All in all it turned out very good. Tender and not dryed out. The front piece is with a quick dredge in the foil juices. The back pieces are with some homemade sauce. Both ways were good.

Looks delicious, congrats on your success!
As you continue making briskets they get even better...

SoDakSmokerGolfer - do you use lye for your pretzel rolls? can you answer in my pretzel thread in the gallery?

everyone ...... don't be afraid to copy and post your contest cooks in the gallery thread, it gives a chance for people to comment on your cook

As always it was a close race and I have been debating for a couple of hours now kept coming back and drooling!!

3rd place - Deb with the Wings & Pretzels... I have been craving hot wings for a couple of weeks and those looked amazing!

2nd place - SmokinSteiny with the Spatchcock Chicken and baked potato...the color on your chicken was perfect and you can never go wrong with a baked potato!!

1st place - wneill20 with the Pulled Pork Pizza... everything about it looked great! You inspired me to give pizza on the grill another go. The pizza was cooked to perfection and you like your pizza like I do - loaded with meat and veggies!!

Thanks everyone for entering and thanks BP for the prizes!
W

WOW, what a surprise. Thanks for judging Tatonka great cooks everyone and as always thanks BP for letting us play. The bad part about winning is now i have to set out next weekend