unless you get your entry in late!

Tent is the judge...he is a veteran he can handle a ton of entries so bring it on!

It's a new week and I'm looking forward to lots of great entries! If you're cooking anyway, why not enter it and win some Big Poppa Bucks?

If you're new or have any questions about entering, you can review the http://www.pelletsmoking.com/pelletsmoking-com-weekly-cooking-contests-23/weekly-contest-rules-2241/.

I pulled out an old favorite basting sauce recipe that was given to me years ago. I decided to skin the chicken to see if I could get more basting sauce flavor and some wicked smoke flavor with hickory pellets.

Getting happy with some very nice smoke.

Here is a peek as I started the mopping process.

And here they are resting as I built my salad.

I plated the chicken with a grilled Romaine salad.

A very delightful cook but I have to admit that I really missed the skin on the chicken. The basting sauce definitely added a very nice flavor and aroma to the chicken but the hickory flavor was amazing.

pulled stuff out of the frig and this is what i came up w/.

what's that sparky up to now?

found some fresh catfish (didn't like it), fresh scallops and crab cake stuffed in a crab shell and clam shell and some green stuff my wife makes me eat.

is there nothing sparky can't do w/ his maks. i think not.

Oh wow Sparky, that's making me wish I could cook sea food around here. (Can't cook any well I'm still home because of my mom's allergies)

So what I've made today are elk and deer medallions with a red wine reduction sauce.


Started off with a tenderloin of elk and deer.

And set up a drip can... that did nothing the entire time, more on that later.

Once I got the meat down on the grill I also put down a foil pouch that I made with a few air holes that contained some oak pellets.

Unfortunately I realized I probably should have put them in with the coals since they were not going to ignite from that far away.
Fortunately I fixed it by taking a torch to it.

After the meat got a good chance to cook I put some sliced zucchini on the grill.

Well, as I said before the can I put down to catch the juice from the venison did not do a great job, and I was starting to think of something other than a wine reduction to go on the meat, I realized as I was cutting the meat that there was a good amount of juice coming out, so I poured some into the pan and worked with that.
In my panic I forgot to take any pictures, but I do know I used half a cup of pniot, lemon juice, salt, pepper, maybe a quarter cup of water, scallion, and what ever meat juice I could scrounge up to make my sauce.

I think these Top Shelf butts will be just Peachy!

Found a 5 gallon bucket of BD Peach pellets in the garage. 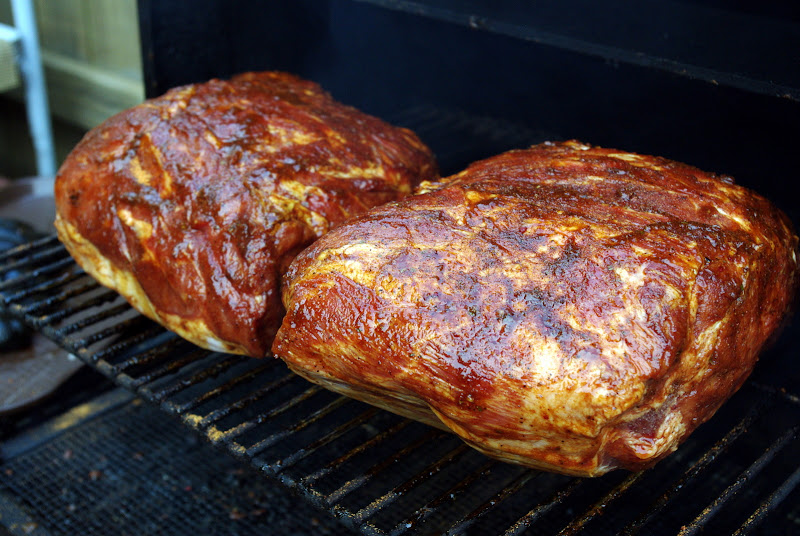 The players.. (these are going up to my Mom & Dad's for an 50th + 25th anniversary party - gotta cut down on the pepper/cayenne) 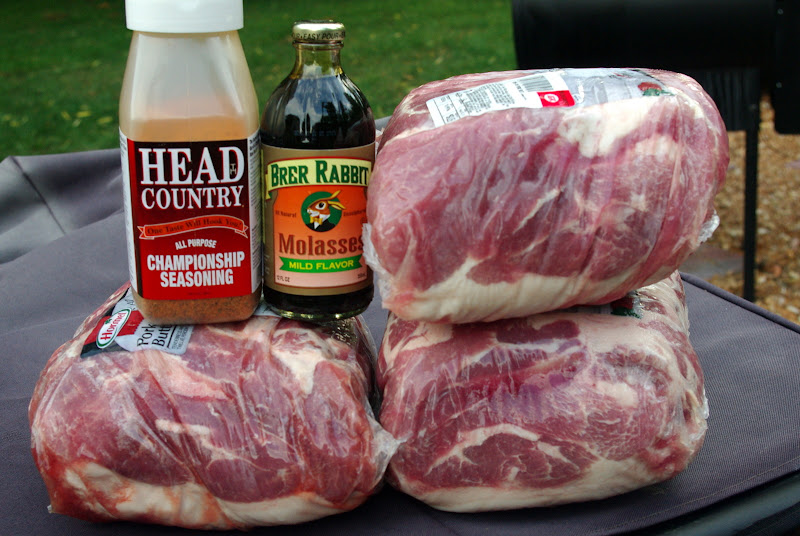 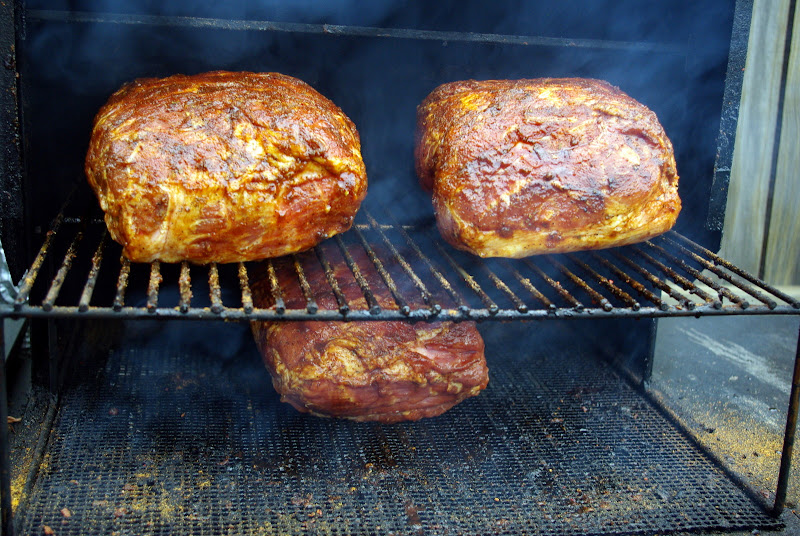 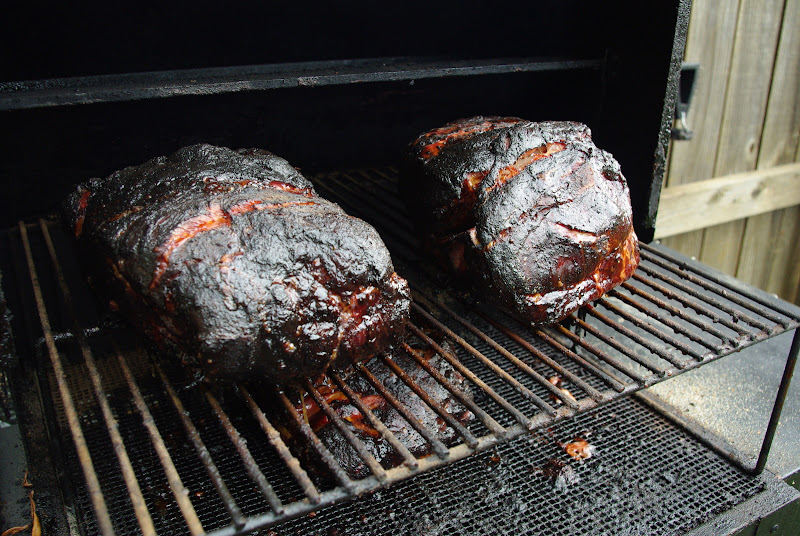 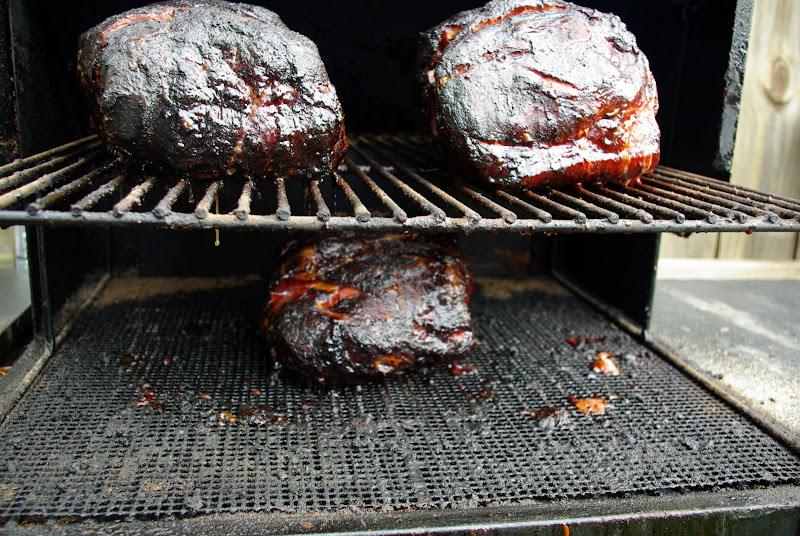 
Almost time to grab a couple of my Nebraskan Cambros out of the attic.. 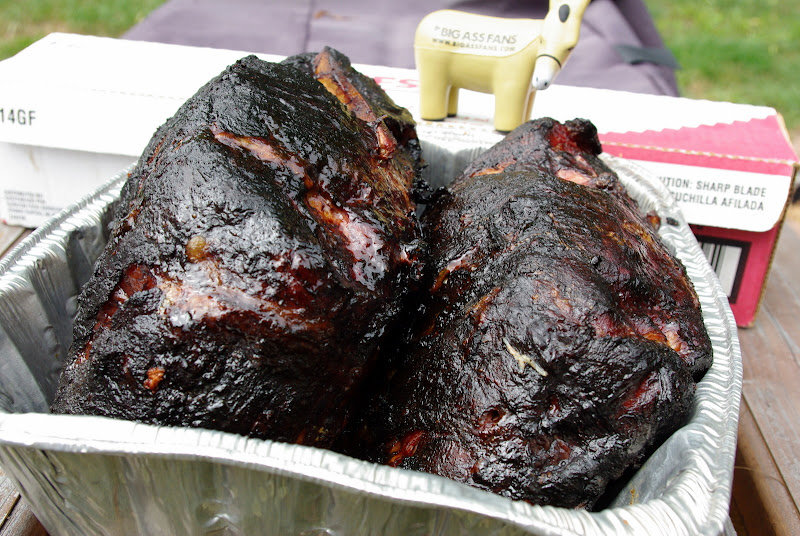 I'll pull them all in a few hours. 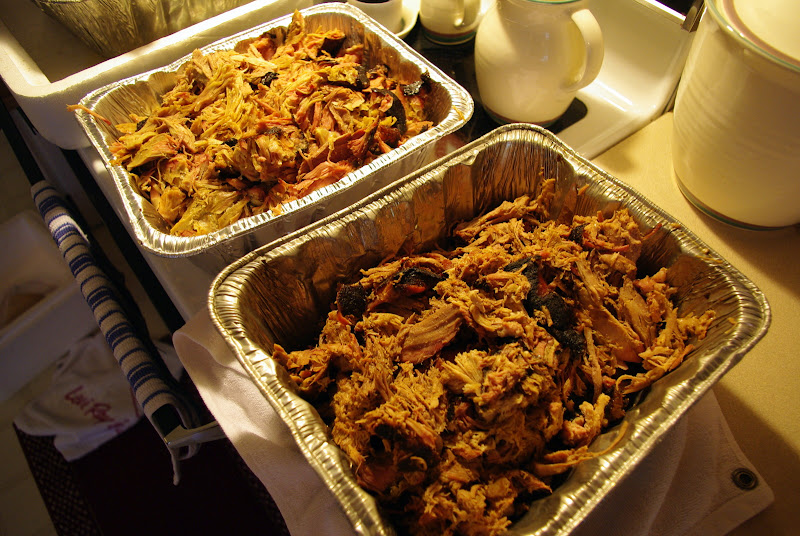 And parked in the freezer.. With a cache of Girl Scout Cookies from who knows when. 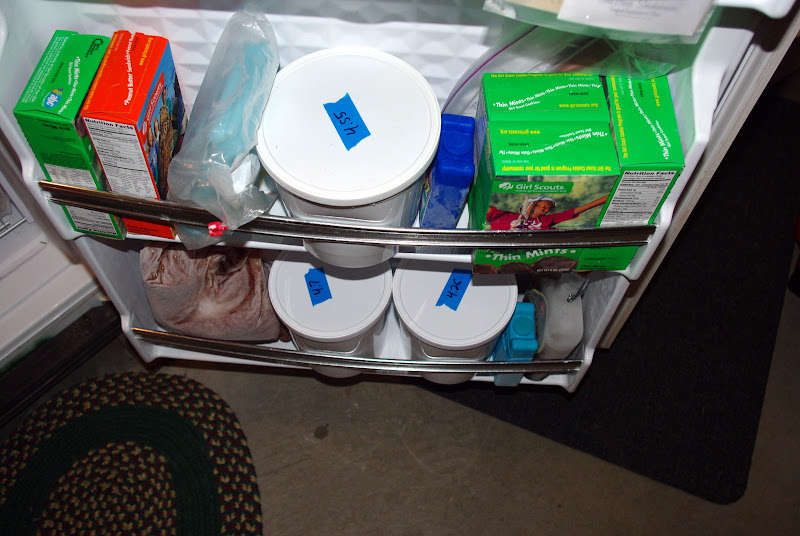 Just a hodgepodge of ingredients.

2 pounds ground turkey (one 85-15 and one 93-7)
1 package of fresh mushrooms - sliced
1 jar of roasted red peppers - sliced/chopped
2 eggs (I use one small container of egg beaters)
1/4 cup of Ott's Buffalo Wing Sauce (will use more next time)
Couple shakes of Starnes
Partial handful of bread crumbs
Heavy shakes of Goya Adobo, Cavendish Greek, Hasty Bake Greek, Mrs Dash and anything else that caught my eye..

It's a bit of a wet mix, but the mushrooms soak up the moisture while it smokes. 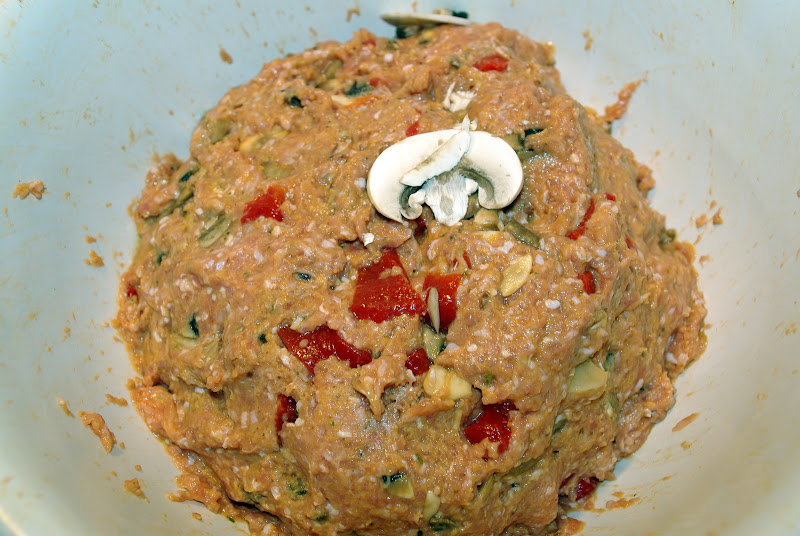 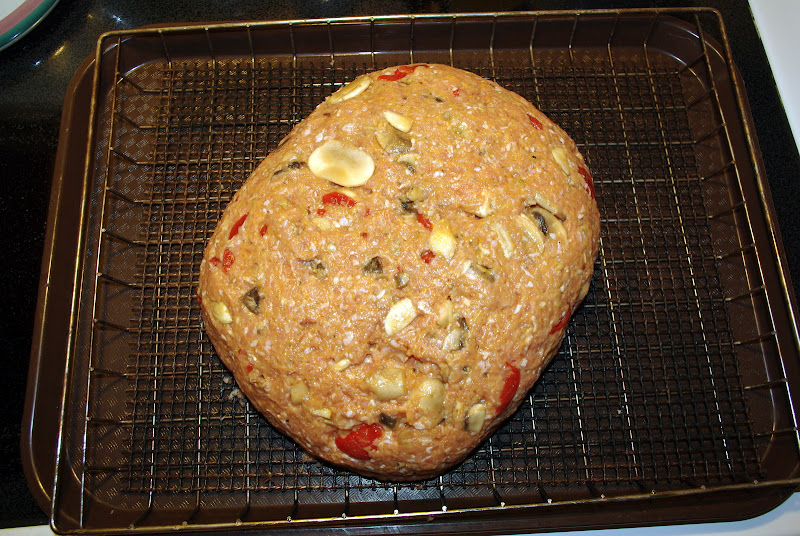 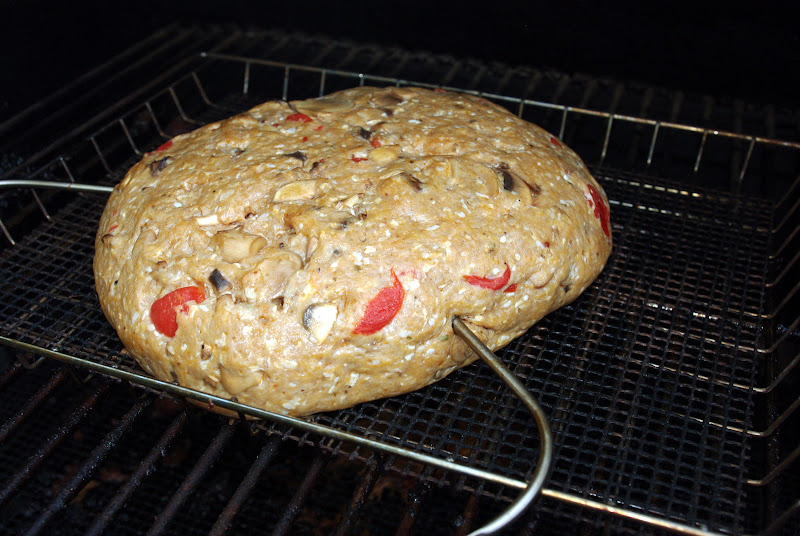 A couple hours (and one flameout and minor grease fire) later. Pulled at 158° and parked it under an inverted foil pan for a while. 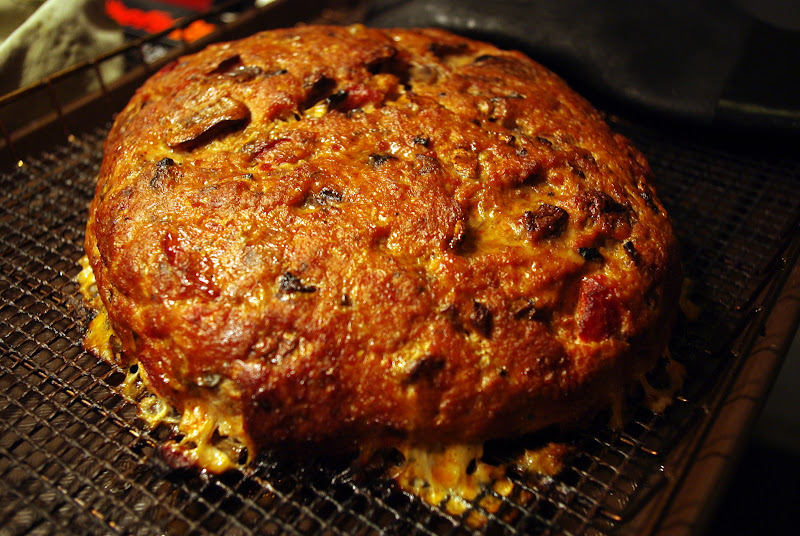 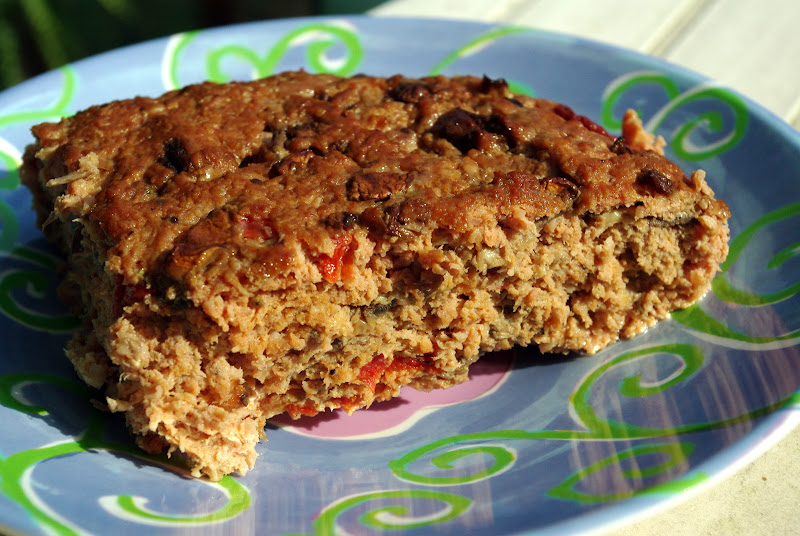 I might toss in some chopped olives next time. The wing sauce gave it a nice zip.

that looks great. throw some over easy eggs on top of that and a meal fit for a king. nice job pat.

I marinated some pork chops in a Jerk marinade from Jamaica.

The two in the back left are for the children.

It has great jerk spice depth and plenty of heat.

Plated with Onion rings, tater tots, a salad and a shock top.

Do I have time to put it in when I get home tonight from work? Around 7:00pm West coast time.

While the Rib Roast was smoking in the MAK I scrubbed some Potatoes, dried them, rubbed them with some Annie's Roasted Garlic EVOO and dusted them with Fagundes Seasoning. Nothing beats Baked Potatoes in the Char-Broil The Big Easy Infrared Smoker, Roaster and Grill (SRG).

A man's gotta have his tools ... Using the MAK 2 for the Rib Roast while the baked potatoes are being cooked in the SRG. Sure keeps the house from heating up during these dog days of summer. Infrared Baked Potatoes are so much tastier than oven baked ones.

After 2 hours of Oak smoke I bumped the SETPOINT temperature to 230ºF until the Rib Roast IT reached 145ºF. Let the Chuck Cross Rib Roast rest under a foil tent for 20 minutes before slicing thinly.

The money $shot ... A few slices of Oak Smoked Chuck Cross Rib Roast, Infrared Baked Potato, and a side of mixed vegetables ... You gotta have your veggies ... Bon Appétit

The reason I love this place... Ultimeat!

I had our neighbors coming over that love to eat anything from the grill and since I love to try to make new things, I decided to make a bunch of different things to try.. a lot of them are inspired from the people that post here all the time.

I started out by getting 7lbs pork shoulder which yielded about 4.5lbs of ground pork.. time to make sausage! I split it in half and make Cliff's kielbasa recipe and the other half was a spicy charice sausage that I found on another forum.
First up: Spicy homemade sausage wrapped jalapeno poppers.

Next I used the kielbasa to make stuffed cabbage (thanks again Cliff). The only thing I changed was using LL w/pepper on the top.

Chicken legs: Marinated 2 different ways the night before. 8 had sambal and Indonesian Ketsup (This is a killer combo of sweet and heat if you can find it!) The other 4 had an experiamental Piri-Piri sauce that I found: And a Landshark for the hot weather!

All in the smoker for 45mins on Smoke... and into the pool for a dip, us this time!
A full MAK is a happy one!:

Look at the smoke!

Most of the meat on the table: A moose meatloaf that was bacon wrapped also made its way to the smoker but I did not get any pics until it was all off:

This was one of the more fun cooks I have done and most of these things I never would have thought of if I did not spend too much time checking in on all of you!
I am still not brave enough to make a dessert yet.... maybe this week

I thought I would start out with an appetizer this week. I've been wanting to do more and more seafood on the General so ... I took a dozen large bay scallops and prepped them lightly with Old Bay, then wrapped them so the surface directed toward the heat was protecting the scallop.

These turned out to be very tasty (image #3). A nice balance of smoke, ham, and scallop flavor accentuated by the Old Bay. I debated whether to make up a dipping sauce and decided to keep it simple.

For the main course, I took an eggplant and cleaned it up, then brushed it lightly with olive oil. Earlier in the day, I already had the General cranking with the GrillGrates in place so once my lunch was finished I dropped the eggplant into place and set the PelletBoss to smoke mode. After an hour I removed them (image #1).

Once the eggplant shells were prepped and stuffed, back onto the MAK (image #2) in smoke mode for 45 minute, then finish at 350 for 30 minutes.

The stuffed shells crisped while finishing and had a great aroma from the lamb and feta. I served this along with steamed broccoli, balsamic cream, and savory garnish (image #3). This was very tasty and a nice change from the norm.

See my post in the gallery for more a few more details, but here are the most important parts:

Rubbed up, CYM glue, Memphis Rib Rub on the left and Hot and Spicy Cajun Rub on the Right:

On the Traeger, P3 and smoke:

Since it's my first time, I'll try something new. Chop up some jalapenos and stir together with some Red Hot Wing Sauce:

Sauced (I wanted to try with and without sauce, so only half of each rack):

Pulled after 25 minutes for sauce to set:

Needed to throw together a quick meal...things have been a little crazy around the ranch lately....

Gotta have dessert...How about Bacon Pralines? Cook a 1lb of bacon on the MAK, then chop. Melt butter with brown sugar, coat pecans, and roast on the MAK for 10 min at 350. (The roasted pecan smell is awesome!)

Sparky says you can never cook ribs too often.

Started with three racks of BBacks, EVOO, Plowboys Yardbird, BPS Little Louies, chili powder, dusting of cayenne/habenero powder. After a couple of hours at 225, this guys are ready for some FL.

Two of the racks get this: undercoat of Texas Rib Candy, brown sugar, butter

The other rack goes meat side down in Franks Red Hot, butter, and cayenne sauce. Here this rack has come out of the foil and is ready for a finish of the aforementioned sauce.

After FL, this rack gets a finish of BBQ sauce

Per Chris Lilly, these will be going at the end of the buffet line!

Poking around in the garden, nice surprise!

Garden fresh tomatos and basil, some EVOO, a little avacado....mine is on the right!

Sammie filled me up...had a few, the rest will be a snack later.

It was a good weekend of pellet smoking!