Ok here we goo after a stellar week and even some newbies!

everybody else that enters gets 5 bucks credit from BPS

Have smoked Pork Butts to 195º - 205ºF for Pulled Pork and will continue to do so But decided this time to take the Pork Butt off at 175ºF and serve it up for dinner as a Sliced Smoked Pork Roast.

Took a 5-lb Pork Butt and inserted Roasted Garlic in slits cut into the Butt. Slathered the Pork Butt with Carolina Treet Original Cooking Barbecue Sauce, some Jan's Dry Rub, and John Henry's Texas Pig Rub. Tightly wrapped the slathered and seasoned Butt in plastic wrap before throwing it into the fridge overnight.

Removed the Pork Butt an hour prior to starting the smoke. Pre-heated the MAK 2 Star General Pellet Grill with American Broadleaf Pure 100 Hickory Pellets. Setpoint to SMOKE and Hickory smoked for 2 hours.

While the Pork Butt was in FTC I worked on the side dishes of Steamed Potatoes and Stir Fried Cabbage, Onions, and Mushrooms. Ambient temperature at this point was 98ºF and I didn't want to heat up the house so I used my Sport Grill.

The Pork Butt turned out great with a beautiful bark, touch of a smoke ring, and you can see the roasted garlic that were inserted. The Butt was very moist and our guests were speechless when they initially tested a morsel

The money $shot ... Some Sliced Hickory Smoked Pork Butt with a side of Steamed Potatoes and stir fried Cabbage, Onions, and Mushrooms. Man Oh Man, that bark was scrumptious ... Bon Appétit!!

You can't beat leftovers ... This morning I warmed up some of that Smoked Pork Butt with some scrabbled eggs and fried taters with red onions ... Good Eats!!

We eat very little fat and I needed a pot pie topping that was low fat. I decided on a savory French toast. Cubes of homemade beer bread mixed with eggs, broth and seasonings.

I used pork from a shoulder previously smoked on my DB.

The pulled pork has my sweet, tart and spicy sauce for added flavor and is added to the stew mixture at the very end of it's cook.

Then the hot stew goes into a Pam sprayed crock, heated in a 350° oven for about 30 minutes until bubbling, and then the topping is added to the pot pie toward the end of it's stay in the oven, long enough to get very crispy and slightly browned. The bottom of this top only crust remains moist so there is a transition in texture and mouth feel from the moist to the crispy top.

This was one of the best and tastiest foods I have ever cooked with the smoked pulled pork adding much more flavor than when I previously have made this with smoked turkey.

Unfortunately, very tired after a long day of weed eating, I dropped one of the casseroles TWICE on the counter, just making a mess with spilled gravy although the food remained in the crock. And then I dropped one of my light box lamps putting it away in the cabinet, smashing the special bulb so I have just order a couple more.

Just one of those days.

Here are the finished pot pies.

And my dinner plate.

This makes me want to eat again, and I just finished dinner. Thanks for the photos of your meal.

Had a busy day hanging out with the wife and kiddos so when dinner time came around wanted to do something simple and easy so we went for the Yakitori Chicken.

Started with this for the marinade-

Gave it all a 25 minute tumble

Skewered up and ready for the grill

Off the grill and ready to go

This was delicious and quick dinner, the Yakitori marinade gave the chicken great flavor and coupled with the fresh pasta it was a home run!

Kevin was a having a few people over for his birthday, I asked him what he wanted for food and he said ribs......

started the morning out by throwing some baked beans in

made a chicken dip with some leftover smoked chicken breast, instead of buffalo wing sauce I used the pepperplant garlic hot sauce, added some chopped up bacon, starnes bbq sauce on top - the kids loved this

got the ribs going - rubbed with plowboys yardbird, had to breakout the rib rack

some of the kids out by the grill

the beans after about 8 hours

when the ribs came out a birthday pie went in

Art was up for the smokeout a few weeks ago and brought me some ground Elk.

In my smoker proofer with BM Apple.


Used my water stuffer this morning for the Elk Slimmys and 20mm smoked collagen casings.

BBL, Not done yet

Was the wife out of the house when you used your water stuffer in the house?

I had a hankering for a rack of ribs, but the Family wanted something else. No problem!

Slathered it with Peanut butter

When I got home from church:

The flavor of the pulled beef was excellent. The peanut butter flavor kinda dissipates, but the teriaki and the five spice is definitely there.

The Kona coffee spice rub was a gift, I will definitely be using that on ribs again. Not a sweet rub (but then I'm not into overly sweet ribs) but it has a great depth of flavor and does not taste like a cup of coffee.
S

Simply Steak
I took one small rib eye and rubbed it with BP’s Double Secret and ground black pepper with garlic EVOO as the glue.

On the Weber with a handful of black walnut pellets.

Yummy! And rare! Just the way I like it.

Pool party for the relatives.

The Jalapeno shells were smoked to make them soft, then stuffed with pulled pork and topped with smoked Habenero Cheddar cheese. These were gone in a hurry!

The 7-Way Bypass potatoes were pretty much straight up, (with a little cheese application guidance from my 19 year old daughter).

Next up was six racks of Baby Backs done three ways: Two finished with BBQ sauce, two with Mango Habenero Rib Candy, and two with homemade hot wing sauce (the kids won't let me make ribs without doing some this way).

On to the MAK @225 for a couple of hours with hickory pellets.

All were then foiled for an hour at 275, two with the usual brown sugar, butter, and honey, meat side down. Two with a dusting of homegrown cayenne/habenero mix, meat side up. And the last two meat side down in my homemade hot wing sauce.

Here on top is the other BBQ one. On the bottom is one of the Hot Wing ones, finished with one coat of Hot Wing sauce at the start of a 30+ minute finish.

Sometimes you just don't have time to cook a fancy meal, but you still want to eat healthy...this is one of my easy peasy meals:

Tilapia filets, EVOO, Plowboys Jerk rub. Asparagus, EVOO, BPS Dbl Secret, shake in a baggie. MAK at 400, about 20-30 minutes on the Tilapia (depending on filet thickness), 15-25 on the Asparagus (also thickness dependent).

Usually make a salad too, no time for that today.

Smoke setting in MAK for 30 min then bumped it up to 325 for about 30min. Put them on a good potato dinner roll. They were great and everyone loved them. I got a couple "I would never eat ground turkey, but these were awesome"

They brought some fresh caught clams and we made clams casino on the MAK as the second snack.. also really good with a touch of smoke!

This is "A Tale of Two Fatties"

The Cheddarwurst Fatty was such a big hit it was requested again this weekend along with another new idea I've had brewing.

I figured the classic beef & seafood combo might be pretty tasty in a fattie, so why not try it?

The wife sauteed up some salad shrimp into some Scampi while I flatted out 2 lbs ground chuck, hit it with some Little Louie's and a layer of softened cream cheese. I then added the shrimp scampi, & rolled it up inside a bacon weave. 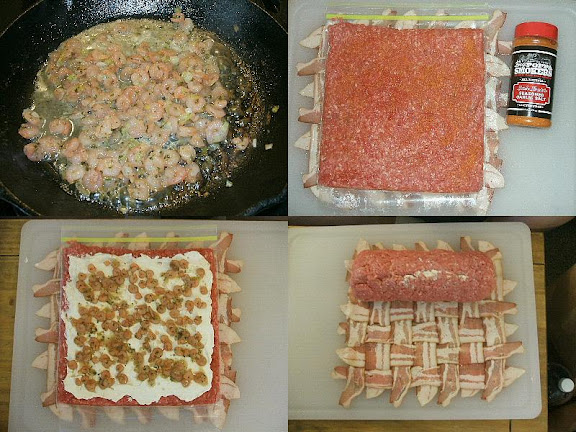 I made up a packet of Sugar Maple pellets and put it in the grill along with the Surf & Turf Fattie & a Cheddarwurst Fattie (Kielbasa & Cheddar- no bacon).

We also made up a batch of Roasted Red Pepper & Bacon Corn Bread and put that on the grill along with the fatties when they had roughly 30 minutes left to go. 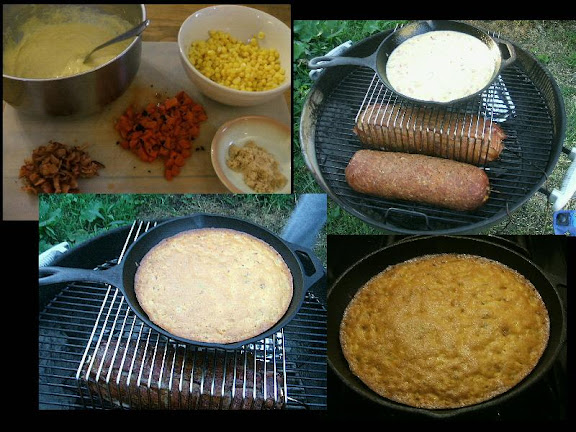 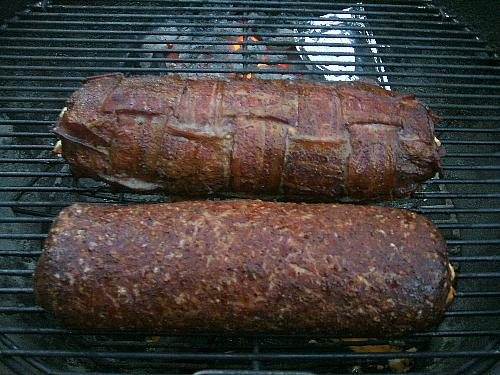 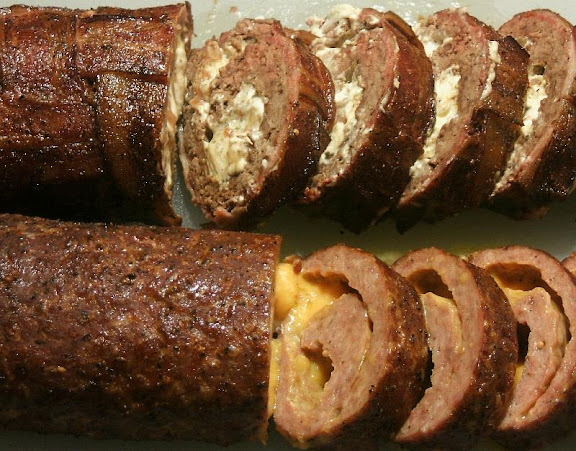 The Cornbread done and delicious! 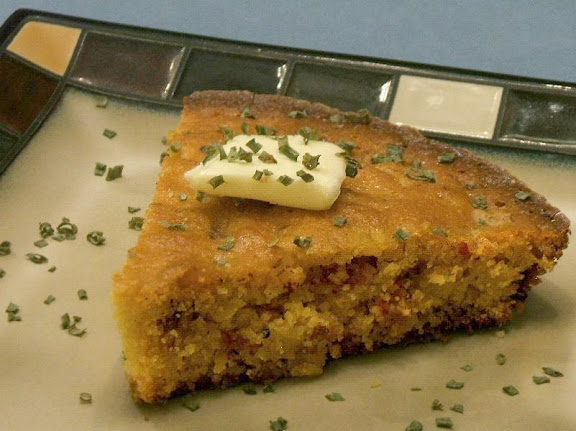 The Surft & Turf fattie served up on some toasted buns. They were FANTASTIC! 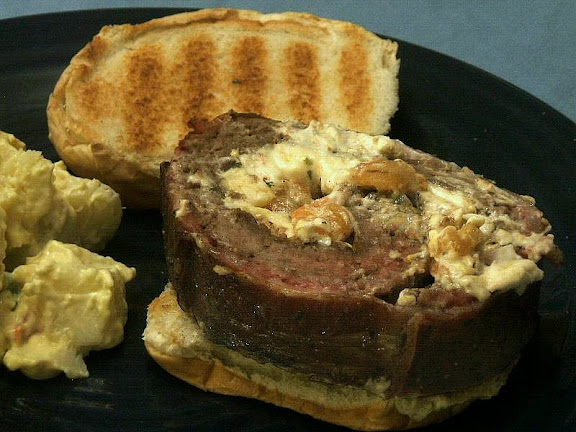 i shouldn't have to tell ya what i am eating. ya'll should know.

using my 2 favorite rubs on my ribs.

look how meaty those are. nice..... it pays to be nice to the butcher.

some FL (foil love). trying something new this go around.

the cajun ones i just sprayed w/ apple juice. they look good though.

out of the FL. look how pretty. that LL w/P is a great rub for ribs.

ribs done. i must say. i am getting better at this rib thing.

Sparky,
You must be a major player in your butcher's retirement plan. No wonder he loves you. Treat him to a FT every now and then. He's worth it.