This past Fall, while my mom was recovering from her heart surgery, she mentioned that she'd like to have some bacon, but most bacon is just too dang salty for her.

Well, you know me! I got to thinking of ways to make a good-tasting, low-salt bacon that she could enjoy and stay within her sodium restrictions. After playing around with a couple of batches, what I came up with was a low-salt chopped & formed version of my Cider-Mill bacon, using ground pork.


Stir the salt, curing salt, and sugars into the apple cider until dissolved. 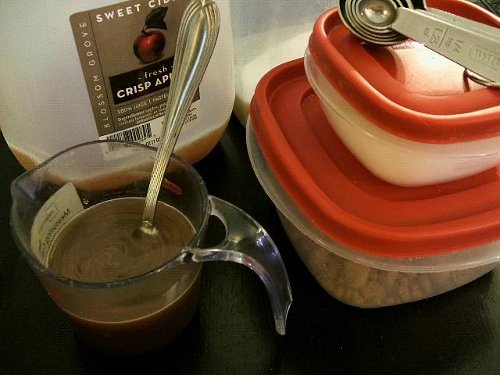 Then pour the cider-brine mixture over the ground pork and mix thoroughly until uniform in color (no pink spots). Like any other cured sausage, the meat will take on a slightly grayish tint from the Sodium Nitrite oxidizing. This is normal. Continue mixing until you see no pink spots, then you know it's mixed thoroughly.

The meat was formed into loaf approximately 10" x 10" square and about 1 1/2" thick, on a mesh cooking mat, and a probe inserted to monitor the internal temperature. First it was cold smoked for about 3 hours using my A-Maze-N Pellet Tube smoker. I chose an Apple/Hickory blend. Apple gives a deep smoke, and Hickory has a warm, salty, bacony smell and flavor which was perfect for this low-salt bacon!

After letting it cool, it was wrapped and refrigerated for 48 hours, to let the smoke permeate, before slicing.
After 48 hours, it was sliced medium-thin (about 18 - 20 slices per lb), and packaged. 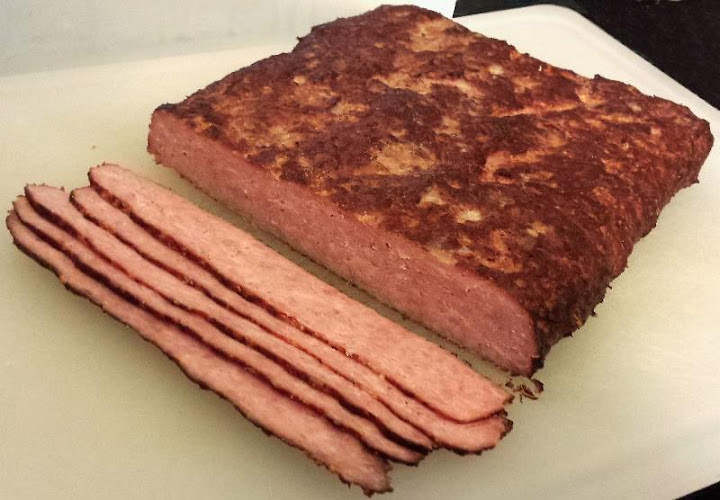 Here's a test batch fried up. Not bad at all! It sure smelled like regular bacon - nice and smokey! 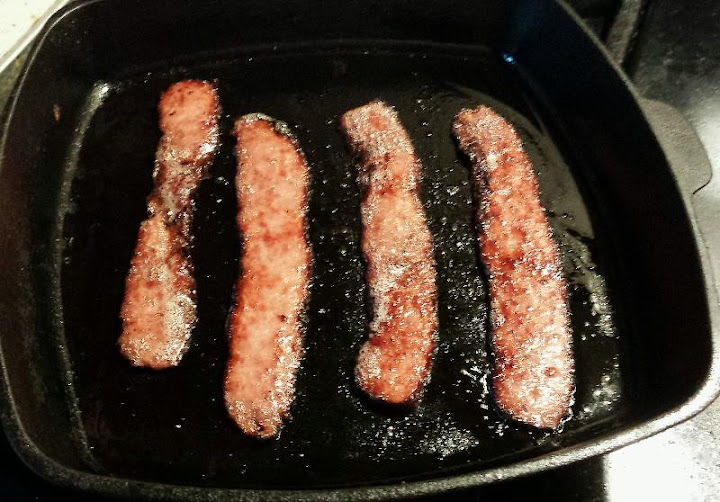 It was very quick to make. The fast cure time means NO WAITING; you can put it on the smoker right after mixing it.

The texture is not the same as regular bacon; it's similar to Turkey Bacon (which is also chopped & formed). On sandwiches it was harder to tell a difference. It made excellent BLT's!

You have the option of adjusting amount of salt, as noted in the recipe above, to get a regular sodium level.

Overall: A really good option for those needing to watch their salt intake! At 20 slices per lb, this will give a sodium count of about 70 mg sodium per slice - about half that of normal bacon. My family thought it actually tasted pretty dang good, especially being half the salt of regular bacon, and best of all, my mom liked it!

Great idea Cliff! My hat is off to you. It reminded me of a ground meat jerky recipe that I used to make. The ground meat mixture was pressed into a 9"X9" pan to form the loaf. It gave it a uniform thickness for even smoking and drying. For those of us not as talented with our hands in loaf making, I'm wondering if one could use the same 9X9 technique to form the loaf and then turn it out on to the smoker surface.