Never Fear the contest is here!

Im sitting in Laughlin Nevada across from the great Meat Man and his family...big contest...we have a turkey on a drum with oak pellets

So I want you kids to bring it....I am giving an extra 5 bucks if I see snow in the pic....this is in addition to the dough if you win

$5 for everyone else that enters

First the king crab. Into the pot for about 15 minutes at a low simmer.

All done let’s shell the meat.

FYI 3lbs of king crab get you about 17 oz of meat.

Onto the crepe filling. The players

Mix it up and cool

Now the crepe batter. The players.

Mix it up let rest.

Let’s make the topping for the crepes. Some parmesan cheese,parsley,butter and fresh bread crumbs.

Let’s season the steak and bring to room temp.

Cook and combine till thick

Fill the crepes with the crab mixture. Put crepes in a buttered dish. Pour béchamel over crepes and then top with bread crumb topping.

Waiting on the crepes to heat thru. Let’s plate.

Cookin' for the Scouters

I am volunteering as a staff member for our local Scout councils Wood Badge program.

We made a little lunch for our all-day meeting today.

The next morning: (the lower one is already in FTC)

Off to my meeting, cooler in tow. The Wood Badge course director is the Dean here, its where the meeting was

things got a little crazy around serving time, but I managed to snap a few pics with my phone:

The briskets were very well received. I was a little concerned because I had not had meat from RD before, but it was great! and almost $2.00 less per lb than Sams club.
Last edited: Nov 10, 2012

Start with a couple of boneless Costco butts...

Slathered in Molasses then a liberal coating of Big Poppa's Jallelujah Bacon Jalapeno Rub was applied...

Onto the Memphis last night at 8 P.M. at setpoint of 220F and the A-MAZE-N tube smoker loaded with Maple pellets...

That molasses makes for a great bark!

These Nutrisystem coolers are great!

Memphis hopper was filled with 12lbs of pellets and this is what was left after 16 hours...

The temps did dip into the low 30s last night and it is currently 54F. The Memphis did fantstic with pellet usage

Time for a sammie...

Set up Traeger at 225, cut shoulder in half and used the bone in side. Let it go for 4 hours and foil wrapped for two.View attachment 1758

Roasted chiles on a pan, then boiled .
After reaching a boil put in the blender to purée. Added to big pot with about 4 qts of water, one large can of strained hominy, and hand crushed bay leaves and oregano, brought to a book, then simmered, lid on.View attachment 1759
Last edited: Nov 10, 2012

Chopped pork with a sharp knife, added to the pot and let simmer to blend in some flavor.View attachment 1760

Part three: one more pic at my spot

Started with a couple hens...

Now on a side note the vacuum tumbler I just bought is a cheap one that uses a hand operated pump for creating vacuum in the canister. So I made up a little adapter using parts I found in the garage to make an adapter for my Foodsaver accessory port to use. Works like a charm...

So back to the cook. Add the hens to the vacuum canister....

Then a thorough rinse and pat dry...

Then some oil on the skin, smoked salt and Rosemary...

The PID worked flawlessly! I adjusted the timing to create some higher temp swings for more cherry smoke. The hens were great. This little cooker is gonna be great for camping

Getting a start on Thanksgiving prep

turkey wings , onions, carrots, celery, garlic , some herbs in on smoke then up to 300 to get all roasty

split a couple of pumpkins - to be cooked down, mashed, into the freezer for ~ a week - to become a pie or cheesecake or something- I know what I want to do now but subject to change

a pork roast for dinner, apples sliced up, tossed with some cider and brown sugar to become applesauce, some italian sausage

loaded up the MAK - our snow is pretty much gone, there is some down on the right in the woods - we have had a beautiful weekend - tomorrow is kayaking weather (it was today too but I took the dog for a hike instead)

turkey & apples out, cranberries in

simmered for a few hours

now strained, will be defatted tomorrow and into the freezer til the day before T-day

the cranberries came out great, I think they will make an appearance too

We were preparing for a winter storm here and I decided to get the majority of the cooking out of the way at the beginning of the weekend.

Started with 2 pork butts and rubbed with mustard and seasoned with Simply Marvelous Pecan Rub. Wrapped and into the fridge for a couple of hours. 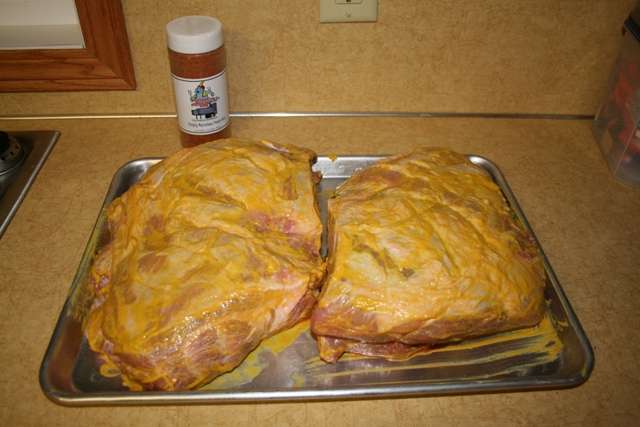 Onto the Yoder at 225° and the AMNPS loaded up with maple pellets (this was in the hopper as well). 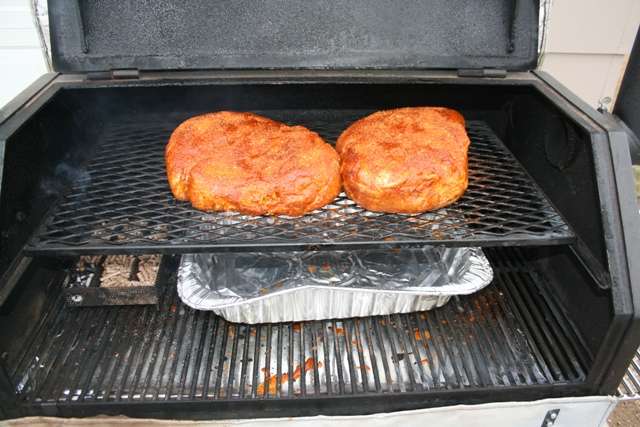 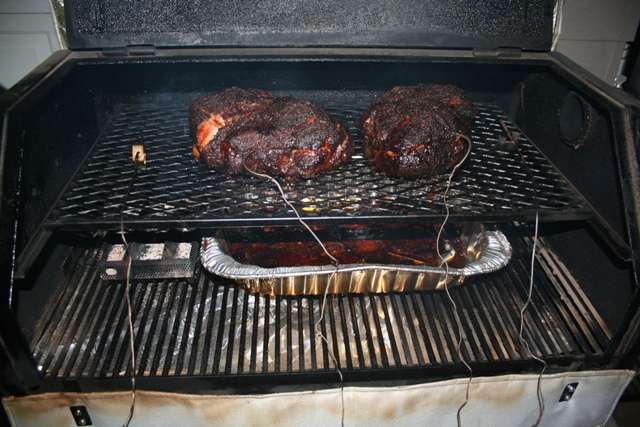 You can see the pellet smoker lasted over 11 hours. 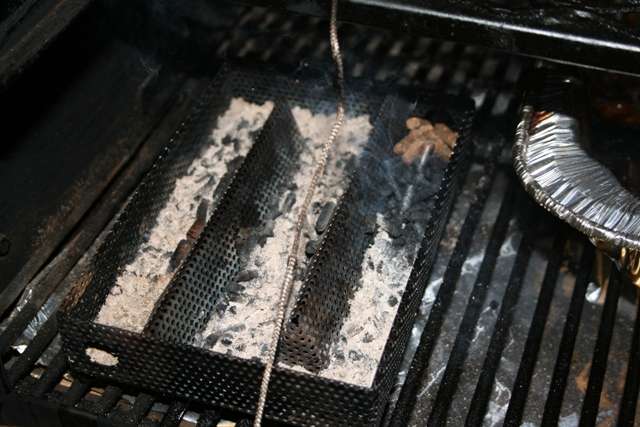 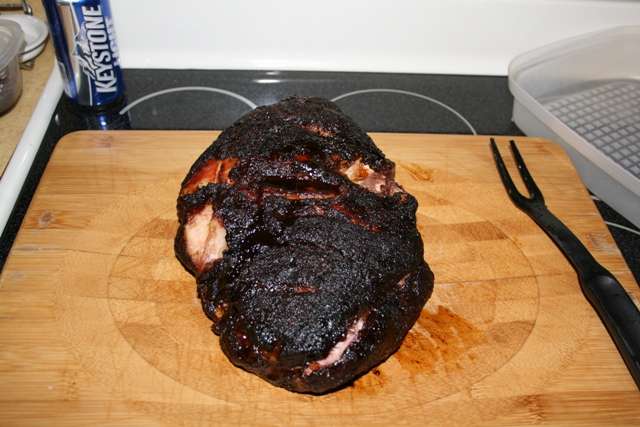 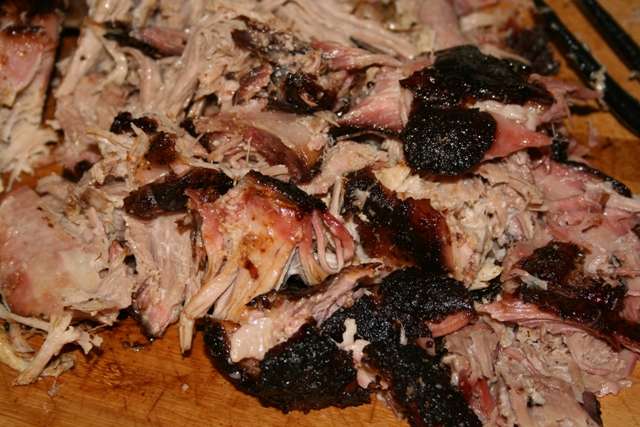 Day 1 - we had pulled pork sandwiches that were devoured by everyone young to old! Didn't get pictures as everyone was hungry.

Tonight was Pizza! BBQ sauce/pizza sauce mix as the base sauce, pulled pork, onions, slawsa, and some diced jalapenos along with some cheese as the toppings. 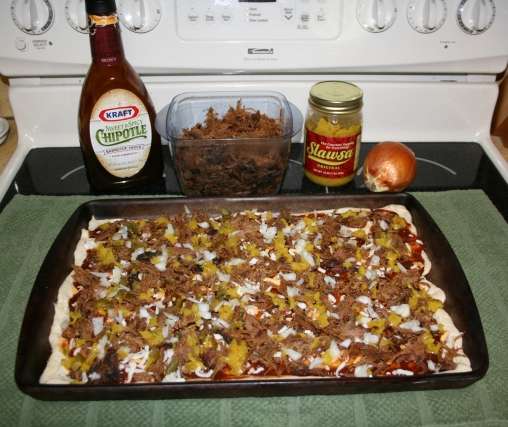 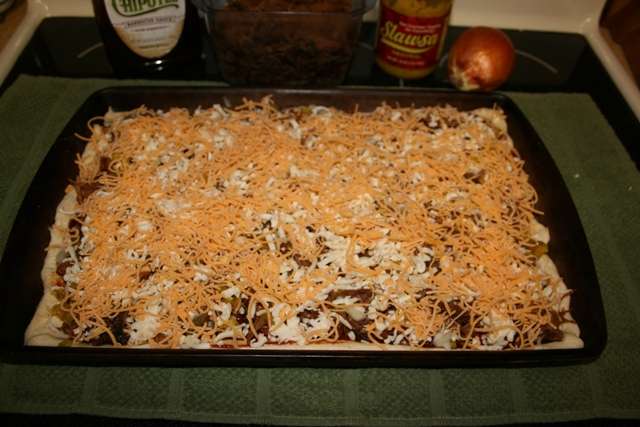 This is where you normally would see me say something like..... "Onto the Yoder to smoke" ....well with the winter storm that has been 3 days and blowing this pizza went into the oven instead.

This was the look outside, and not to mention that driveway has been shoveled twice this weekend already!! (Not looking for the extra $5 here - was just showing why it wasn't finished in the Yoder, LOL!!) 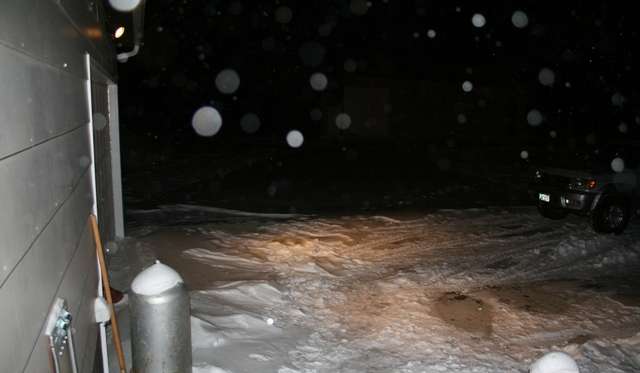 Out of the oven and it was great!! Love pulled pork on pizza, we do wish it was off the Yoder but I was tired of fighting mother nature all weekend! 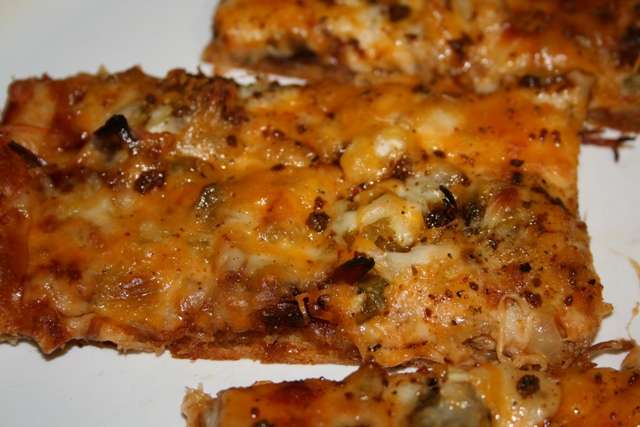 I live in the San Francisco bay area so looked outside but no snow. We only get snow once every 7-10 years and it pretty much melts once it hits the ground so sorry BP, no snow in my pics.
Mrs scooter and I always like to have a turkey dinner a few weeks before Thanksgiving. Sort of a prep for the big day. Went to Costco today and the turkeys are in, Foster Farms for $.99/lb. They also have organic for $2.99/lb.
Bought a 12lb'r (non organic) and decided to do a cooker face off, MAK vs BPS drum.

Note: I cut out the backbone and placed it with the neck onto the MAK before cooking the bird. When the backbone and neck were cooked I placed them into a pot with water and celery then boiled it down to a yummy turkey stock. Made a roux and added the turkey stock. After the bird halves were done and resting in the dripping pan I added some water to the drippings and loosened them up then strained it and added the dripping stock to the gravy. Sensational!

I split the bird right down the middle and seasoned each half exactly the same with garlic olive oil, Jalapeno Seasoned Salt, Desert Gold and Plowboys Yardbird (on the skin).

One half on the MAK with BM hickory pellets

Done and resting, MAK on the left, drum on the right

Appearance of the MAK skin

Appearance of the BPS drum skin

Appearance of the MAK skin

Appearance of the BPS drum skin

Plated with mashed taters and gravy, peas and cranberry sauce. MAK turkey on the left, drum on the right. Now for the results of taste and texture. Both my daughters thought the MAK produced the best tasting bird while Mrs scooter and I preferred the BPS drum turkey. The Jalapeno Season Salt with Desert Gold was a great combo on the bird! Looks like I'll be splitting my birds from now on to please the entire family! It's great to have multiple cooker options on the back deck.

I saw a recipe in the Rytek Kutas book for "Honey Loaf," which is a all pork variation on the "Old Fashioned Dutch Loaf" I made about a month ago. I thought, "Oh yeah now that sounds promising."


But first, a little bacon teaser...

We're almost out of bacon again, so here's 9 pounds of my "Cider Mill" cured bacon (and a ham shank bone) getting some apple smoke with the A-Maze-N Tube smoker, then hot smoked on the MAK.

Now here's the real teaser: I have 6 pounds of pork belly & ham Shank being cured for a German bacon called Schinkenspeck. More about that later this week.

Now, onto the Honey Loaf. 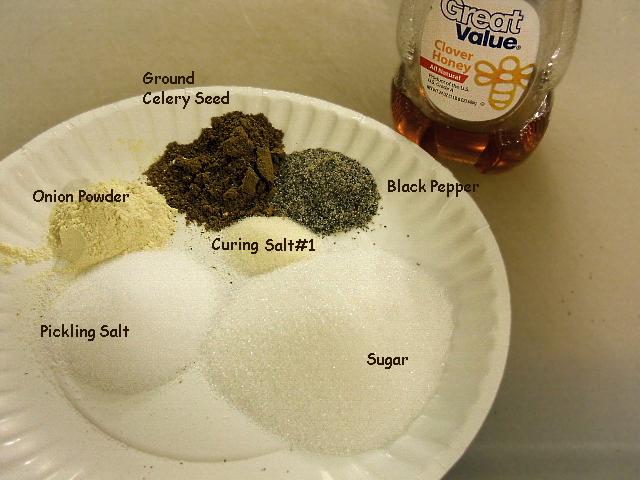 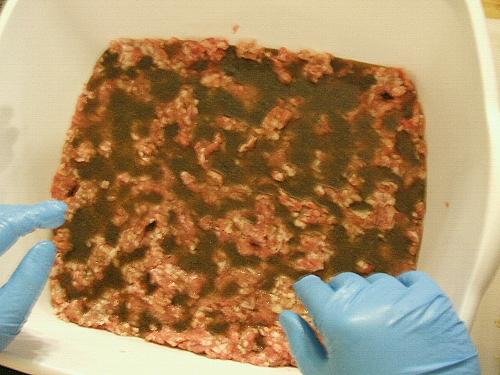 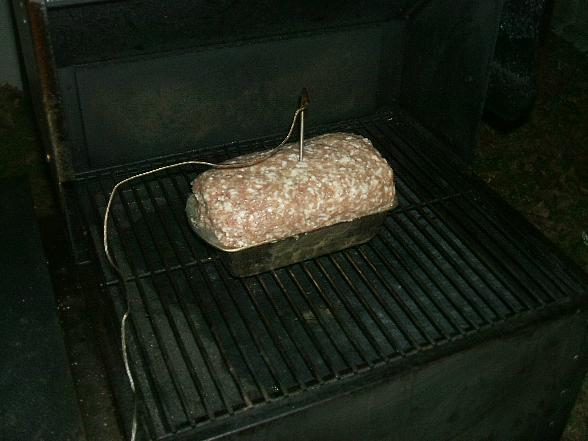 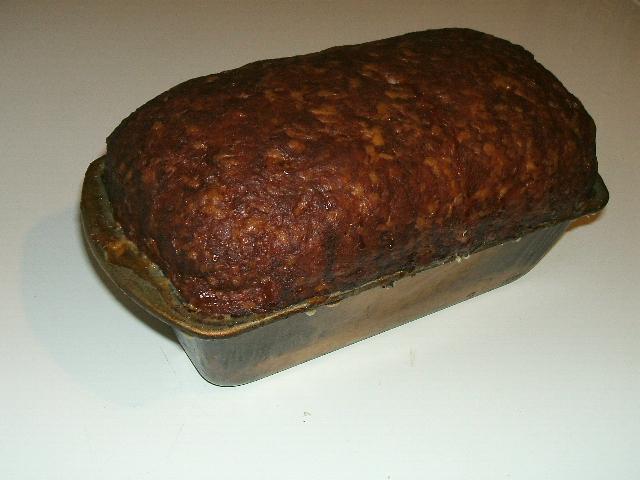 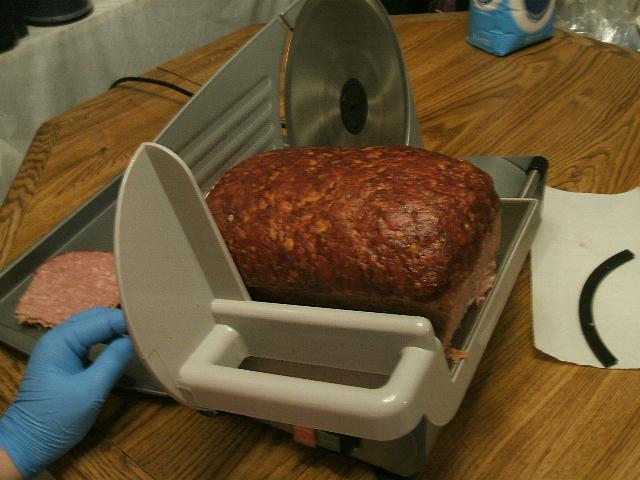 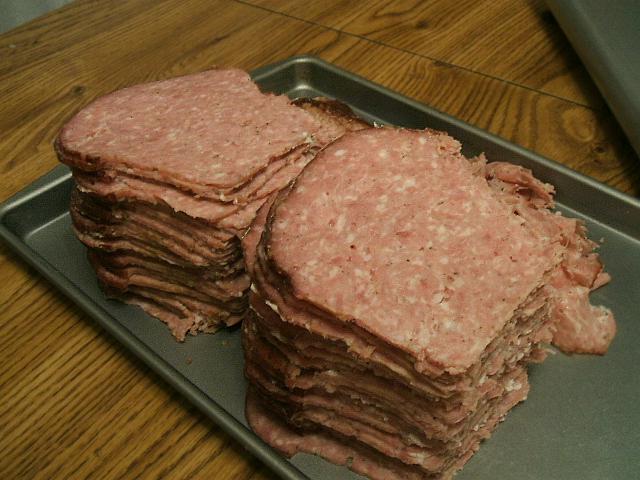 This stuff is DELICIOUS! The honey flavor comes though nicely with the mild savory seasonings. A few slices on some wheat bread with a little spicy mustard & pickle sure made a great sandwich! 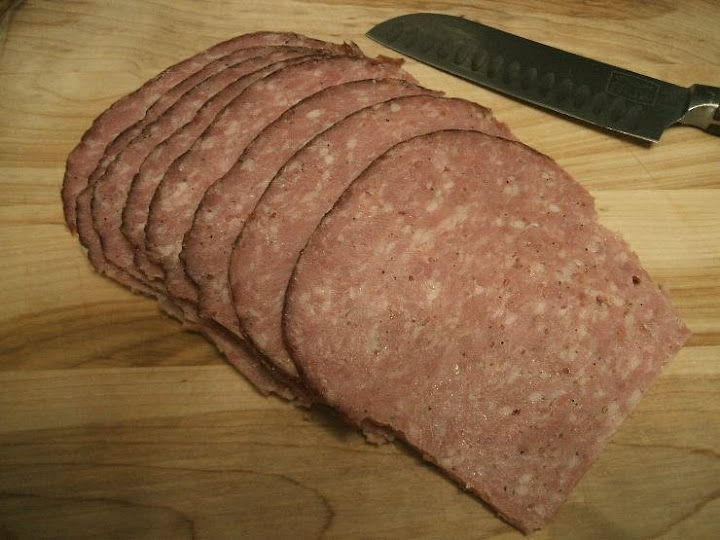 Note to self: Next time I'll cut back on the sugar a bit.
W

There were some good cooks this weekend which dosent make it any easier and here are the players.

3rd Muebe ,Those hens looked perfect nice and golden brown.
2nd Midnighter, Posole on the smoker I would love a bowl of that.
1st RickB, Surf and Turf you had me licking the screen from the beginning. The king crab crapes look to die for.
Thanks everyone else and as always BP

Congrats everyone and thanks BP!!

Congrats to Muebe and Midnighter on thier wins. Thanks Wniell for the 1st place. All the cooks looked great. Looks like there are going to be some great turkey day meals around the tables here. Thanks again to BP for the weekly contest and the great forum here. Looking forward to this weeks contest. Been a little quiet around here lately. Next weekend will give everyone a chance to warmup for thanksgiving so let's see what ya got! Have a great week everyone!