No Excuse not to enter the contest this week! Lurkers sign up ....

$5 credit to all other entries!

On to the MAK set on smoke

Time to plate everything

This was my first time making sausage. I thought it turned out really good. Enjoy!
D

Greek Easter this weekend and my wife is Greek so I had to do a leg of lamb. Only had Boneless legs, I would prefer to to have a bone in leg.
The paste is a mix of garlic, butter and herbs with some salt and pepper.
I cooked the roast at about 325. I didn't get to smoke it at a lower temp first due to time restrictions on the day.

Cinco de Mayo today. I love me some Mexican food.

View attachment 2163
Bone in butt. I cut it up and hit it with a little jalapeño seasoned salt and little Louie's.

View attachment 2164
Onto to MAK for some smoke for an hour or so.

View attachment 2166
Next step. Some water onion orange and bay leaf. Simmers until the water is gone and resting in its rendered fat.

Gonna have to continue this..

View attachment 2168
While you can simply eat as is at this point I like to continue crisping some of the meat a bit more. Can also do in the same pot

View attachment 2171
I had to do some quality testing. It passed.

View attachment 2173
Next in the pan.

View attachment 2174
That's some bacon from my homemade MAK bacon.

View attachment 2177
Some veggies. Gonna oven roast and pan toast these. I forgot to snap a post roast pic. Made some salsa with these.

Guacamole in the house
View attachment 2186

Next up is the dinner plate

View attachment 2189
Cotija cheese on carnitas pork tacos is the best. Too bad I couldn't find any. Feta makes a good stand in though.

Forgot to add the splash of tequila to the drunken beans in my haste to eat all this!!

Just some simple drum sticks. First in the Marinade express with some Stubb's Chicken Marinade. Then onto the MAK at 400 until done . Which is about a hour.

First in the Marinade express with Smoke on Wheels BBQ Marinade. then on the drum at 245 for a hour. Take the pork steaks and in a foil pan with beer and bbq sauce. Used Big Moe's BBQ Sauce. Adjust the drum to 300. Cover the foil pan with foil and cook for another hour. Usually a little BBQ sauce is added at the end, not this time. Wasn't able to enter last week because I had to go to SoCal to get my new cooking partner, Colbie!

Haven't cleaned the MAK in a while, so spent some time this weekend doing a thorough cleaning. Then got her started up and smoking:

Started with some potatoes, Annies Garlic EVOO, and some salt:

Put them on the MAK:

Sliced some zucchini and seasoned with Annies Garlic EVOO and BPS Desert Gold:

For the pork chops here are most of the players... I was going to stuff with just the pepper jack cheese but Marty was seasoning up the WSM with a round of bacon so I crumbled a couple pieces of that to use as well. 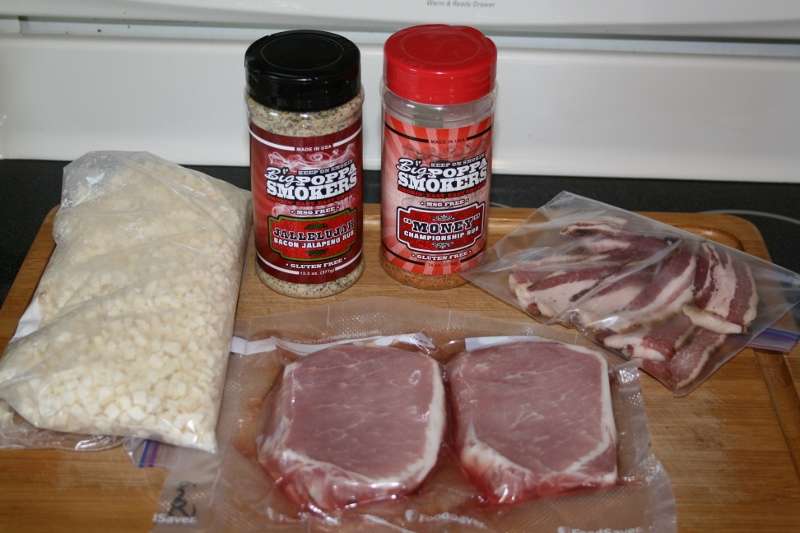 Took the pork chop and cut a slit in the side to create a pocket. Added some pepper jack cheese, some crumbled cooked bacon, and then more cheese. Seasoned both sides with a light coat of BPS Jalapeno Bacon, and then the BPS Money. Then wrapped some of our homemade bacon around them to keep the stuffing in. Used some silicone grilling bands to hold the bacon around the pork chop. Onto the Yoder to smoke for 45 mins at 150°. There was MHC (blended pellet of Maple, Hickory, and Cherry) in both the hopper and the tube smoker. 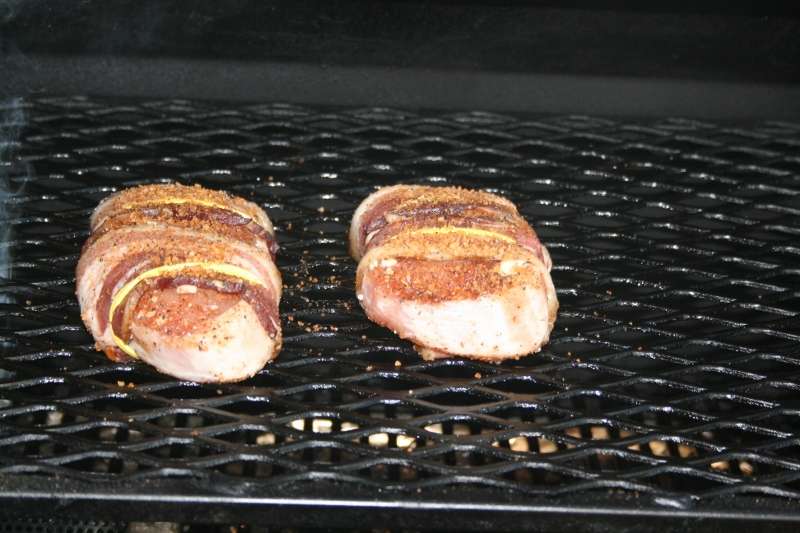 Potatoes/Veggies were a cheat from the frozen section - added some butter, minced garlic and BPS Desert Gold to the pan and then onto the grill to cook with the pork chops. 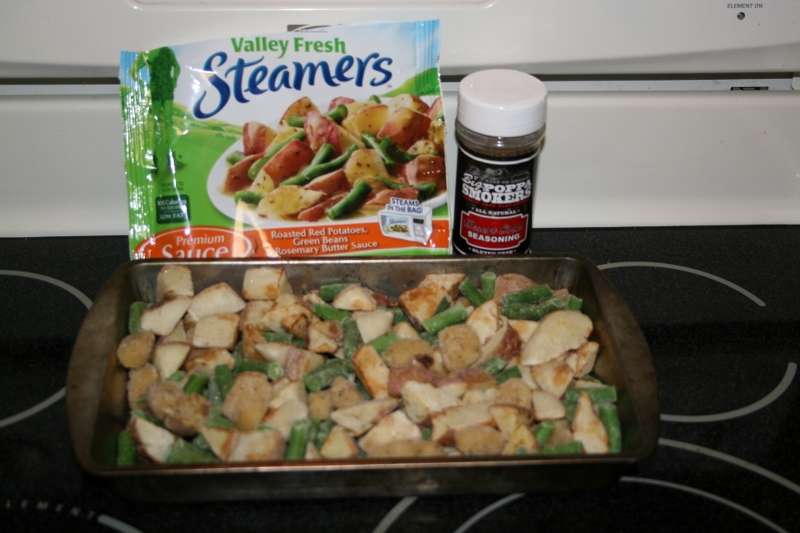 Plated pic - all done on the grill including the dinner roll. That was a cheat too from the frozen section! 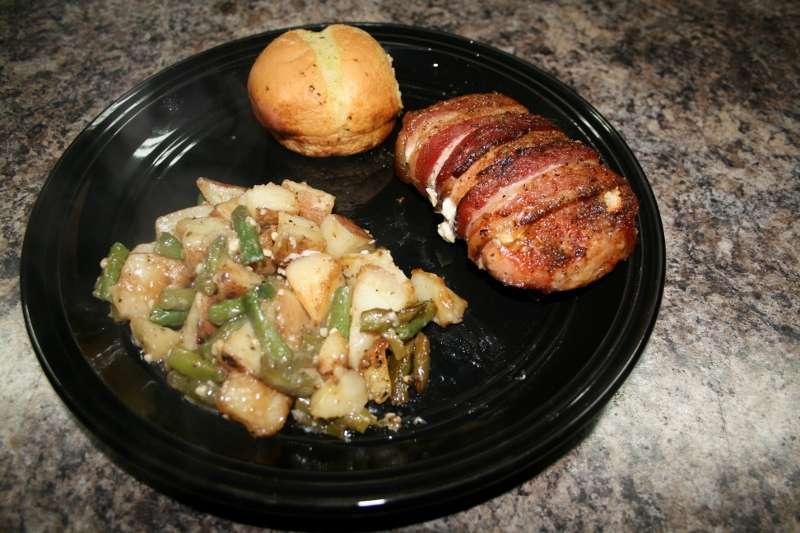 Sliced! See I did actually stuff those even though I didn't get a picture. 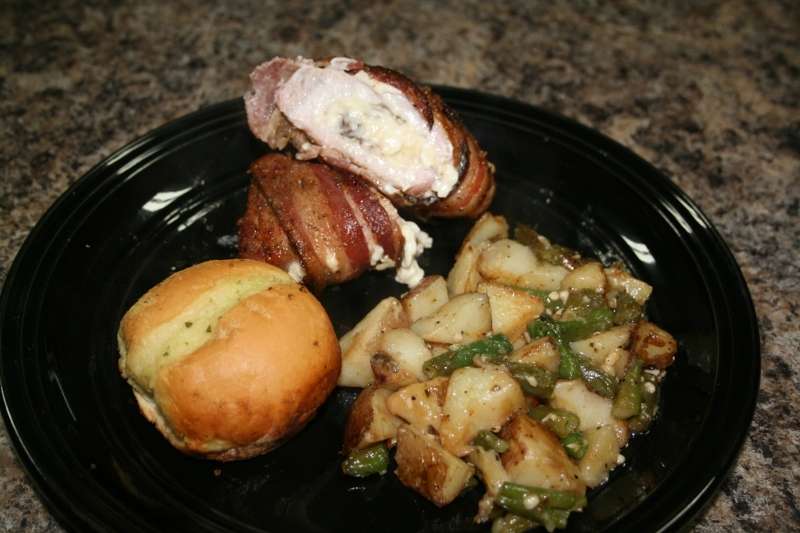 I wouldn't leave you without a close up shot! 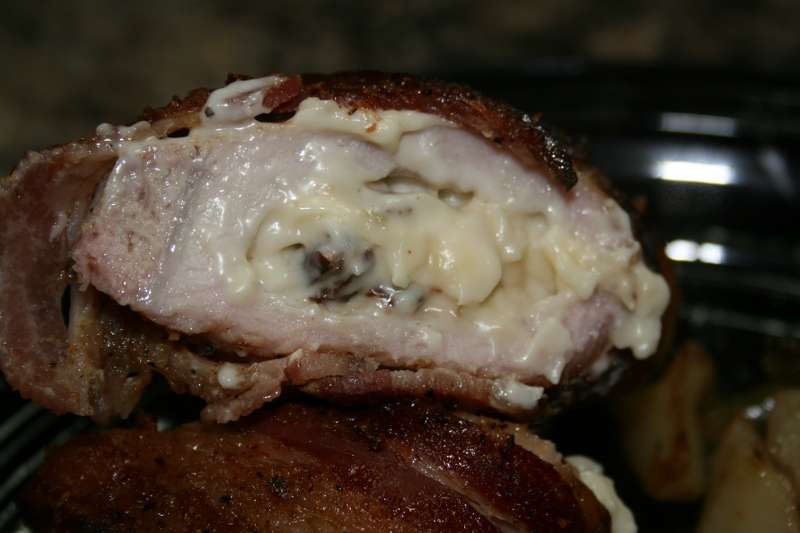 Loved everything about this chop and will be doing them again, the taste was amazing!!

Put on the BPS drum with pecan wood and hickory pellets. We're going to do a reverse sear on these. Cook low at around 250 until the chops are around 150IT then over super hot coals for a few minutes to carmelize the outside.

Flip the chops on the drum

Chops are almost done so time to get the asparagus on the MAK. Seasoned with EVOO, Desert Gold and Jalapeno seasoned salt. Same seasonings go on the roasted potatoes

Chops are done so pull them off and let them rest while the charcoal get super hot for the reverse sear.

Plate it up! Drizzle some of the sauce over the chop... ooohh lala!!

I cleaned the wife's baby back bone also. So good. Seriously, make these chops, you won't regret it.

Combine all ingredients and place in a plastic bag with the chops for 6 hours.
Smoke at 250 until 150 IT. Sear with super high heat for a few minutes until they get carmelized a bit. Rest for about 10 mins and serve.

Put the sugar and mustard in the top of a double boiler and mix with a whisk. When all combined, whisk in the egg yolks and vinegar. Cook over simmering water, stirring constantly, until the sauce thickens to be able to coat the back of a spoon, maybe 5-10 minutes tops. Remove from the heat and allow the mixture to cool. When cool, fold in the creme fraiche (or sour cream or whipping cream).
Last edited: May 5, 2013

He only put 5 or 6 per post! It wont make any difference why don't we just ask everyone to keep them at a reasonable limit and keep them in one post. Lets say 15 pics per post one post per entrie. This would make it a lot easier to follow and to judge.
Last edited: May 6, 2013

Ok I count seven entries so I declare this a contest. And the players are.

Leg of Lamb and Veggies

Some really nice cooks this week. We need to get some more entries though. It's summer time so let's all get cooking! So let's get to it. But before I do may I make one comment. There should be some balloon text above Colbies head that says "I drove all the way from LA to get smoked on a MAK? Just Damn!"

Tatonka3a2. Very nice chops Tanya and no we never doubted you stuffed those! Nice Job!

Nothing short about that meal! Those chops did'nt even need the sear. Can't find one thing wrong. Well maybe one...I was'nt at the table!
Perfect Dude!!!

Thanks for everyones participation and as always thanks to BP for the playground and goodies!
Last edited: May 6, 2013

I believe the attachment manager limits attachments to 5 per post.