I've baked several of these cakes in a regular oven, but cooking one on the grill was definitely inspired by this forum: TTNuge's Dutch Oven thread, CaterQ's Peach Pioneer Cobbler, Big Poppa's mention of smoked and caramelized pineapple, HoDeDo and others' smoked nuts. Then... Sparky mentioned smoked Cherries for margaritas (which really got my mouth watering).

I got to thinking... Caramelized pineapple, smoked cherries & nuts, rustic cake... Aha! I had a recipe that could utilize all those and it called for being baked in a cast Iron skillet which was perfect for the grill!

Here's my adaptation of a Pineapple Up-Side-Down Cake. This cake is made in three stages: The topping, The batter base & the beaten egg whites which are then folded into the batter making it very fluffy and light almost like a sponge cake.

In a large 9" or 10" skillet melt the butter and spread the brown sugar into an even layer. Arrange the pineapple rings, cherries and Pecan halves like shown. 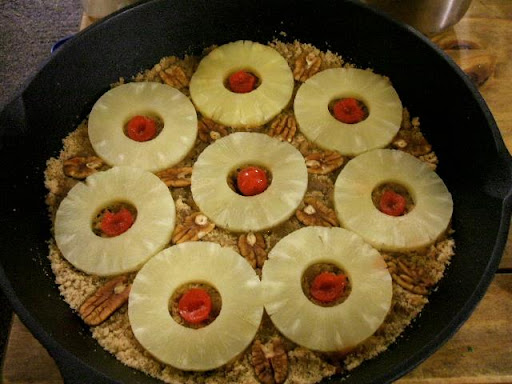 In a mixing bowl, beat the Egg yolks until smooth & pale yellow. Add the dry ingredients & Pineapple Juice & mix into a stiff batter. Set aside.

Beat the egg whites until stiff peaks form. Set aside.

What could go better with the pecans on the topping than a light Pecan smoke? Put the skillet with the cake topping in a 325°-350° pit to smoke and caramelize for 5 - 10 minutes. While that's happening GENTLY fold the egg whites into the batter. Spread the cake batter over the smoked topping and bake for 45 min. - 1 hour until lightly brown and an inserted toothpick comes out clean.

Allow to cool then invert the cake onto a serving plate. 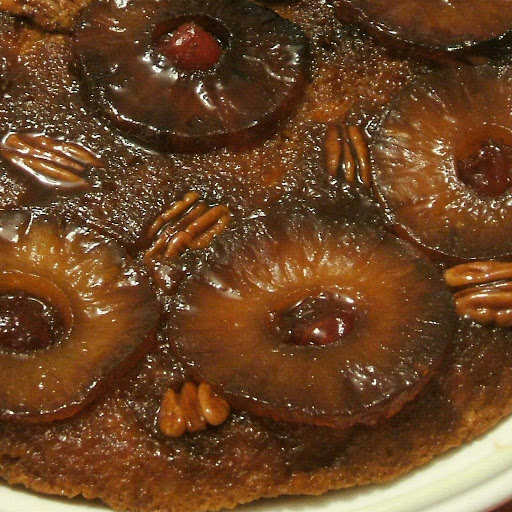 The Cake turned out fluffy & moist. The pineapple topping was caramelized & gooey with a slight smokiness that was out of this world. 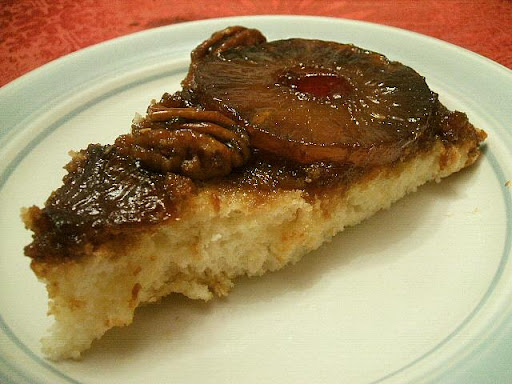 Pineapple upside-down cake baked in an regular oven is now ruined for me !

Thanks, I hope you enjoy!

That's my favorite desert right there! I can't wait to try that in my MAK when I get it.
Yours looks awesome!

I tried your recipe last week and the cake came out great. The wife doesn't like pecans so I left them out. Love the smoke flavor. Not too overpowering, just enought to keep things interesting. I will definitely be making this again. Thanks for posting the recipe !!