Sparky is the Judge! This weeks contest!

OK lets blow the doors off of this thing....

Sparky is the judge after some dazzling ribs. He is on the hot seat. Think different. Think outside the box. Go for it. Sparky will appreciate it. Trust me.

Some of you newbies or lurkers really need to join in...it really isnt judging food it is just selecting a cook or three that rings the judges bell. The new poster seems to have pretty good luck too

If there are fewer than 6 cooks it is a $10 Dollar Credit to Big Poppa Smokers
if there are 6 cooks entering it is
25 Dollar Store Credit
One Gallon of Big Bob Gibson Red Sauce....Great Chris Lilly sauce
6 Coozies

If there are 12 cooks entered then the top 3 cooks will get a pair of Big Poppa Super Probes that are made by Maverick and are replacement probes with a 712 degree heat limit!

bring it dudes and dudettes. i want outside the box. what do you love to cook. now do something with it that you would never do. don't make food that i want. make something that you love, but way out there.....
D

Ok here it is pretty basic stuff, with a wife that is a very picky eater, I have to cook for the both of us. I feel a pork butt coming up this next weekend! 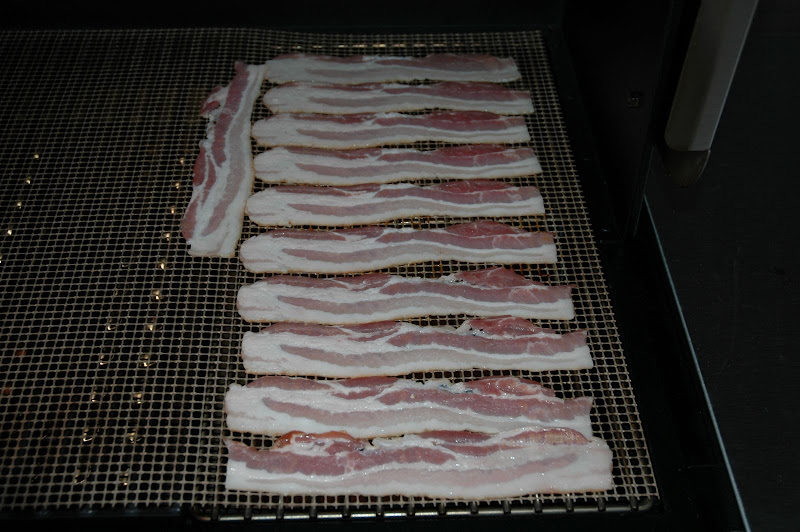 I will never do bacon in a pan again if I dont have to. 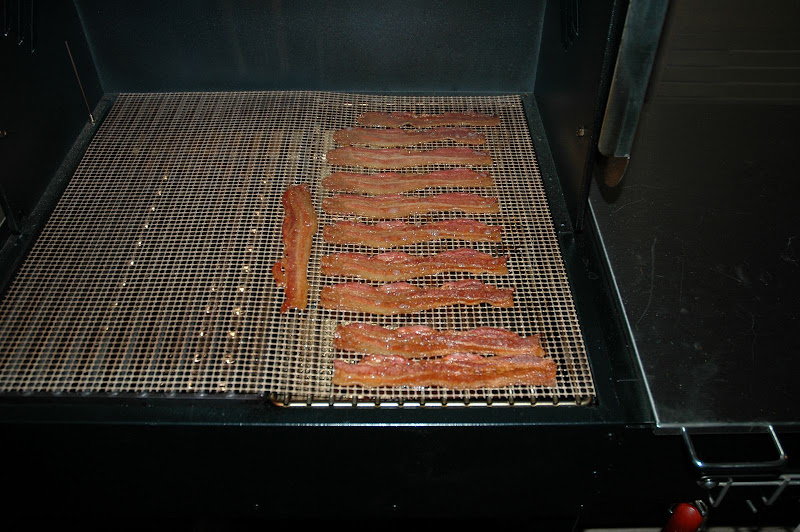 Tonight was an easy night, so we decided to do a Papa Murphy's pizza. I took the bacon that I had cooked and put it on my half of the pizza. 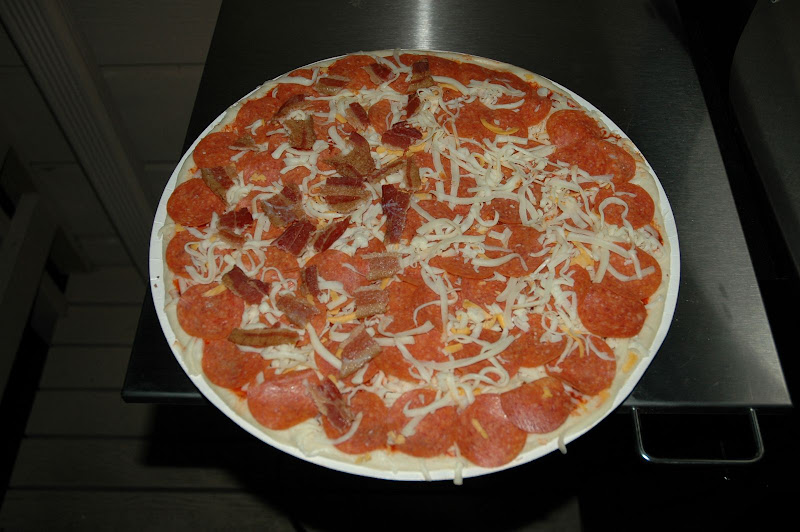 Boy oh Boy it was Tasty! The wife even commented tonigh how much she liked the pizza 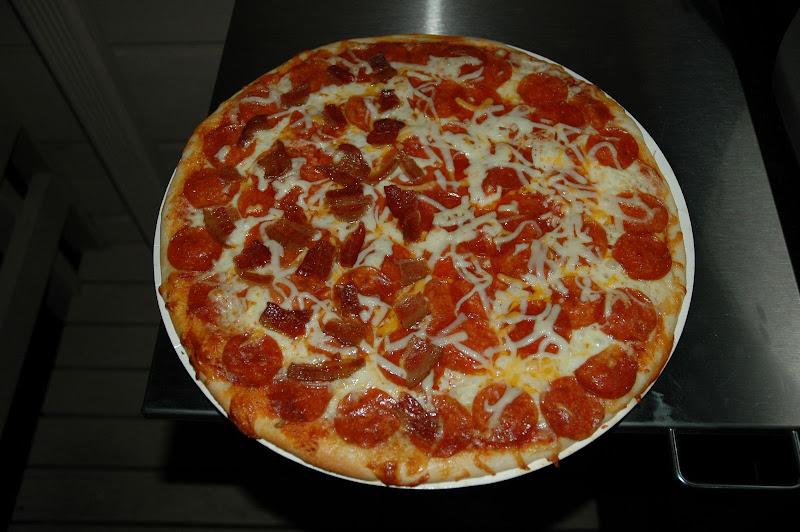 I have been doing lot of beef & pork lately, needed to get back to the healthier chicken & veggies.

Took a split chicken, cut it down further into parts & skinned it, sprinkled with oregano, marjoram, thyme, basil,rosemary, crushed red pepper, salt & pepper. In the pan - red & green pepper, onions, shallots, zucchini, carrots, some oil cured olives & sprinkled with the same herbs as the chicken. On the traeger at 225 for about an hour.

Into a larger pan - the chicken, veggies

Back into the Traeger at 275 until the chicken hit 165. The veggies weren't done enough so pulled the chicken out & veggies back in at 400 until done.

Served with Barilla Plus Thin Spaghetti

2lbs of the best Grey/ Bruce beef mixed with egg stove top stuffing some dried pepper from the garden and a little garlic powder.
Mix it and form it in the pan, top with steak sauce (will be the bottom once on the grill)
Run knife around the edges and empty onto a sheet of wax paper.
sprinkle with home made rub and refrigerate to let it firm up

Serve with wild rice/mushrooms and corn

Nice all of you!

Needed to cook some chicken breasts, so I decided to try smoked chicken Parmesan.

Pounded the breasts a bit, rubbed with garlic EVOO and then coated them in a seasoned breading. Next they were seared in a frying pan and then topped with tomato sauce, mozzarella, and Parmesan cheese.

Earlier I had smoked asparagus (garlic EVOO, lemon pepper based seasoning) on grill grates (about 20 mins at 425) and toasted cheese bread.

After having spaghetti two days ago, nobody wanted noodles, so no bed of spaghetti.

Everyone enjoyed it and there were no leftovers!
I

That looks good Rip. Thanks for the help

Snacks for the Plow Guys!

We have had an incredible amount of snow this year and have two messy days predicted for this week...... so I figured I would make a little care package for the plow guys that have spent an huge amount of time in their truck this winter (including an hour or so stuck in my driveway last week ending in a tow truck pulling them out of the snowbank)

So yesterday I did a few nuts - almonds & pistachios (the bradley smoker racks sure come in handy in the traeger, it makes it easy to pull stuff off and move it around) .....

I split the almonds into four batches - one with sweet heat chipolte sauce, one with Butcher Honey rub & a little canola oil, one with Soleius cajun rub & oil and the last with Pepper Plant Garlic. The pistachios were just salted pistachio. I smoked them all with oak

Yesterday I mixed up a 2 1/2 lb batch of bbq beef sticks. Today I smoked them with hickory

Package started (looking at this now the gift bag looks like it has snowflakes, it is not intentional, I am so NOT the Martha Stewart type)

I'll finish off the bag Monday night with some cookies or brownies since I expect we will be seeing them on Tuesday
Last edited: Jan 30, 2011

slather with CT then applied the rub, wrap in plastic wrap and rest in the fridge

Took an Apple, Peeled and diced, into a pot with some water, cook down for a while, run through a food mill and you have Applesauce
Added 1-2 Tablespoons of Blue cheese crumbles, stirring over medium heat until combined

Plated with a corn muffin and blue cheese crumbles on top

Started out with a quick dawn flight to get me fired up...(the 'smoke' is from a coal fired power plant)

Then home to get Lil Tex fired up....first up was Pecan pie

Buried in a Dutch oven with veggies

Then back on the smoker at 275 with a foil press, and the lid on until Mama says it's done.

Add some mashed potatoes, and bread...

Top off with ice cream and pie...

Sparky asked us to take something we love to cook and add a twist.

For a church luncheon today, one of the ladies and I planned matching dishes. She made Homemade Jack Daniels Baked Beans and I was to make Jack Daniels Pulled Pork to go with them.

Here's my twist; I called this Triple Jack Daniels Pulled Pork because I used JD whiskey three ways; JD Pellets, JD in the braising liquid and JD in the BBQ sauce.

I started in the wee hours of the morning with 5 smallish pork butts, slathered on a little mustard and homemade rub, then onto the pit to smoke with some Jack Daniels pellets.

Several hours and a decent bark later, the butts went into a hot roasting pan for transporting along with some braising liquid consisting of Brown Sugar, Cider Vinegar & some JD. 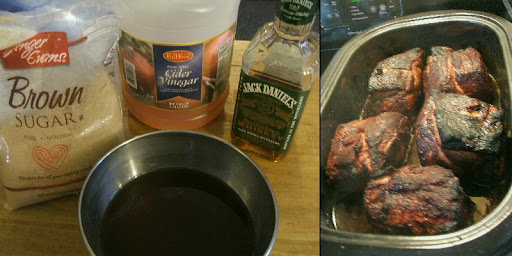 I also made up a batch homemade Jack Daniels BBQ sauce to go on the pork.

Just before eating I strapped on my BBQ gloves and pulled the pork adding some of the juices back in. The JD gave it a great flavor.

And now for the money shots... 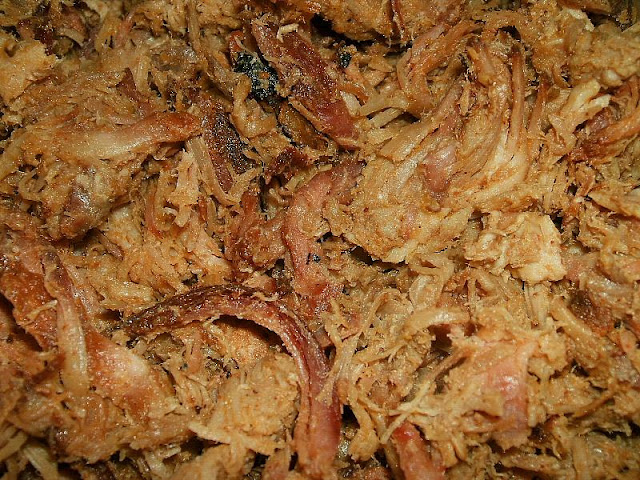 Here's a plated sandwich topped with some slaw and the Jack Daniels BBQ sauce served up with some of Priscilla's homemade Jack Daniels beans. Folks got a kick out of the JD Duo. They were a perfect match and both were crowd pleasers! 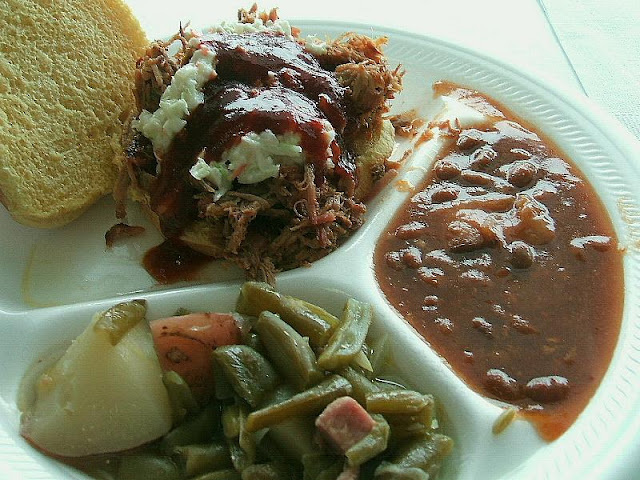 Wow. Sparky, I don't envy your job. I wouldn't want to be this week's judge with so many great entries.

i will let late entries post until 6 pm tonight which is when i will post the winners. food looks real good ppl. 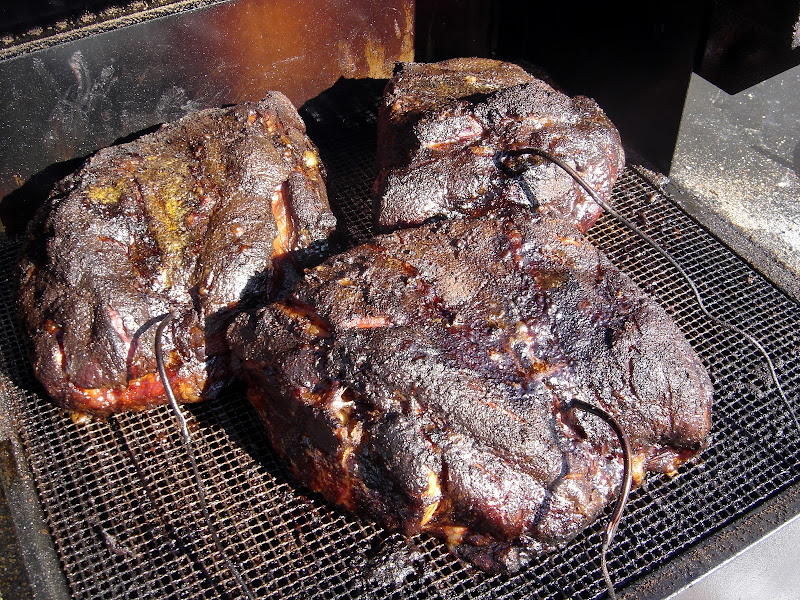 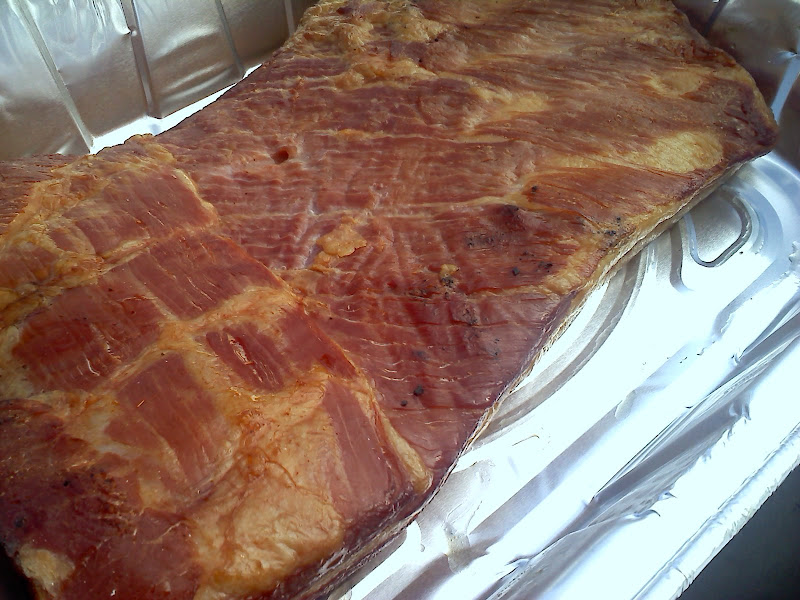 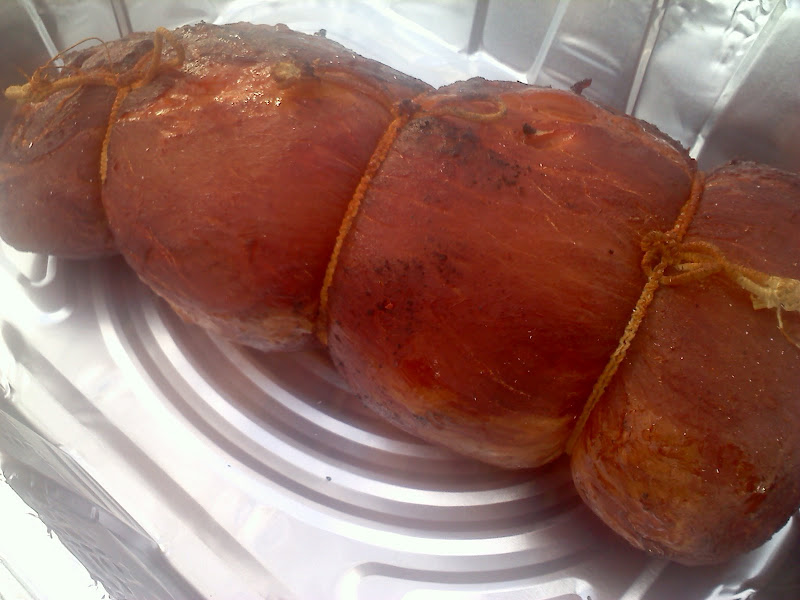 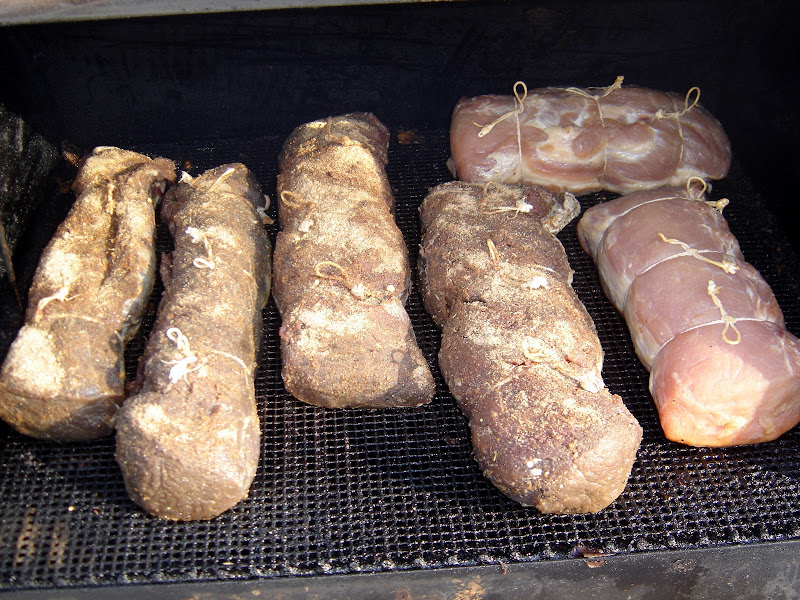 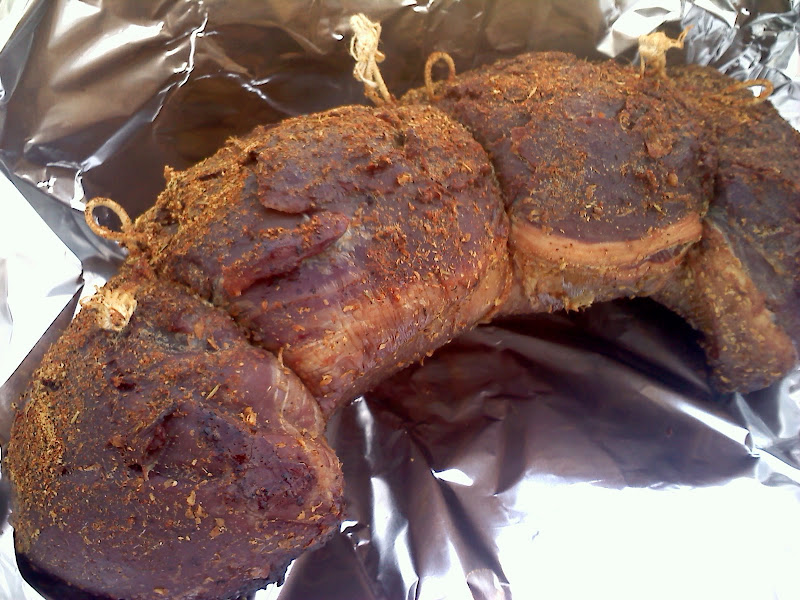 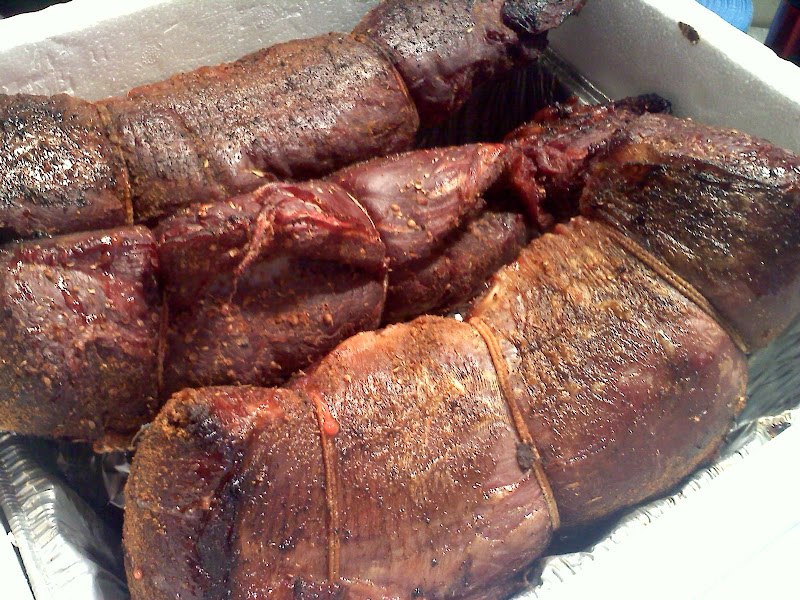