I had a Thomas Edison afternoon. I succeeded in finding a way not to make pulled pork.

A couple of weeks ago I used a Cook's Country recipe to prepare Kalua (Hawaiian) pork. It was prepared similarly to pulled pork but was cooked in an aluminum pan with a few holes poked in for smoke for a couple of hours, then completely covered for a few more hours. I wasn't a big fan of the rub; but the meat was tender, succulent, juicy, delicious. It fell apart like regular pulled pork. I thought at that time it might be worth trying a method like this for pulled pork.

Then this week I read Craig "Meathead" Goldwyn's article on methods to avoid the stall. It is a great article worth the read. The short version is you can avoid the long "stall" where the internal temp of the pork shoulder (or brisket) sits at 160* +/- for a few hours. The solution is to tightly wrap it in foil. Hey; that's what I found with the Kalua Pork. I was intrigued and thought I'd give it a shot. If I could cook a good pulled pork in just a few hours, I'd be very happy.

So, I went for it. My earlier results were so good I thought I'd skip the injection and brine, so I went straight for the rub. I put a basic pork rub on a 3.8 pound boneless pork shoulder Saturday night, wrapped it tightly in plastic wrap and let it rest in the refrigerator. 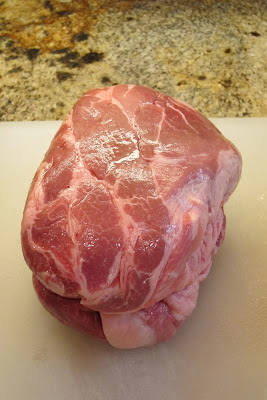 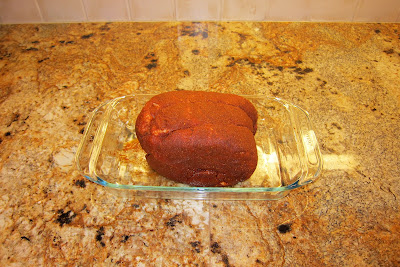 After a night taking in the rub.

One benefit of this method: shorter cook time means I can get to church in the morning. After church the shoulder goes on the grill as a normal cook 235* waiting for an IT of 150. 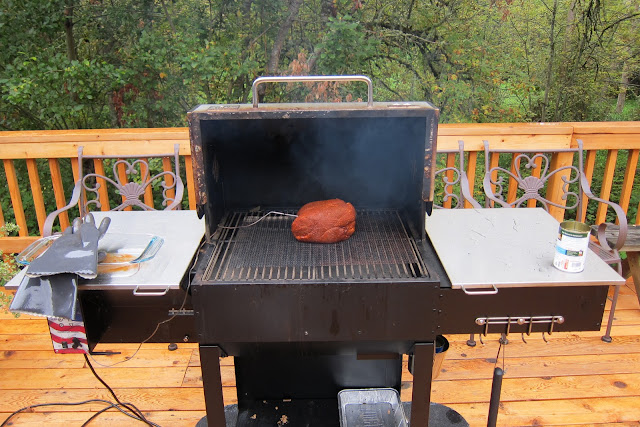 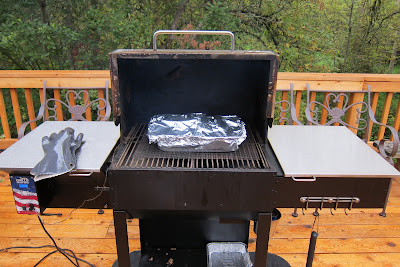 I was very surprised; it went from 145 to 190 in an hour. A figured it would go up more quickly than usual, but this was ridiculous. 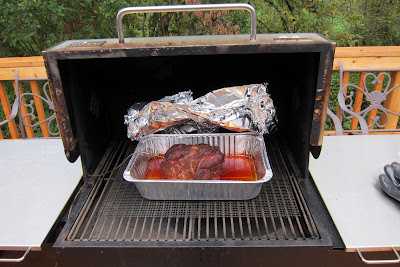 And I'm not a fan of the color of the juices.

After resting, I took on the task of pulling. 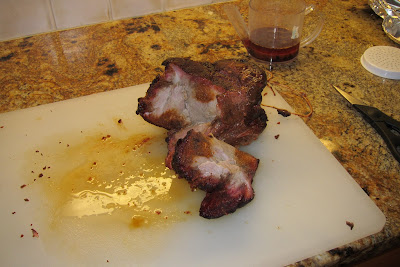 The butt was tougher than my grandma. But bear claws were a trusty ally. 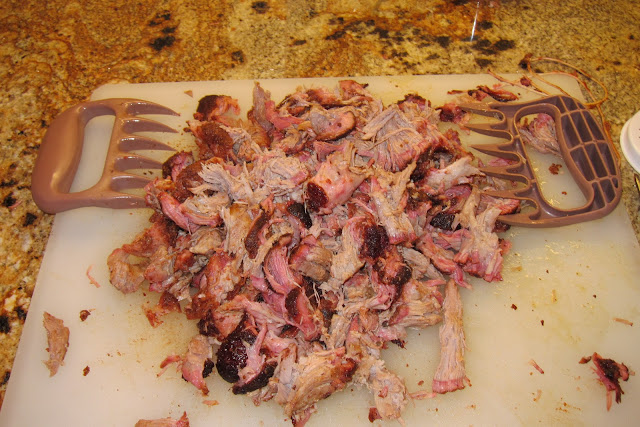 It may look good, but it sure didn't taste good.

Thank goodness for barbecue sauce. I used a little Bob Gibson's sauce and served up a sandwich with some slaw. 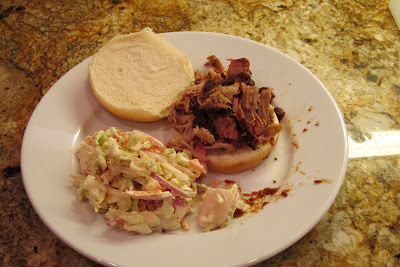 Part of the problem may have been the meat, I had 2nd thoughts about it when I picked it out Saturday; it had a lot of fluid in the package. The other problem may have been that it went from 145 to 190 so quickly. I think next time, I'll pay closer attention to the piece of meat I use and then smoke for only 2 hours then put in the foil.

There may be a lesson to be learned here; I'll spend a few days figuring out what it was.
Last edited: Oct 2, 2011
B

This is something tha we do a few times a year inside but thought we would try it on the MAK...Used the griddle to brown up some chicken pieces and followed by browning some apples...Deglazed the griddle with some hard cider and then wisked in some dijon mustard and placed the chicken and apples back in...

made some gruyere popovers wth milk, flour and eggs and topped with some fresh gruyere..

Served over some egg noodles with the remainder of the sauce that was thickend with a little heavy cream!!

Made some apple deserts with halved apples, butter, cinn, and brown sugar.... filled with butter mixture and wrapped in pie dough.... Cooked at 350 for about 40min then topped with ice cream and a carmel drizzle...

Dinner was delicious even though my Bills and Yankees both lost today!!!!

Rack of Lamb
Final cook for the weekend. Family doesn't care much for lamb, but I love it so I cooked it anyway.

When the potatoes were about done, raised the MAK to high to sear the rack of lamb:

Lamb was great! It was the end of a great weekend.
I

Does look good. Guess I have to pick the winners right?
S

Yep, Smoker Joe! You're in the hot seat and this week looks very challenging!
S

Wow this is hard but here it goes.


Thanks to everyone though it all looked great.

Wowzers I go away for a weekend and you kids cook this? You are all very very good!

Congrats to all the winners! Some amazing things and good inspiration.
B

Dang; I've been away too long.
Came back to site, found a thread for weekly contests and happily posted to the end of the most recent post. Ooops. That was last week's. The current contests are still in the Lounge.

Guess I need to pay closer attention to the details.

Everyone's results this week look fantastic. Good on ya!

Great looking entries this week for sure!

Congrats bflodan !! Nice looking meal there!
Way to go Deb! Those buffalo ribs look tasty for sure!
Thanks for judging smokerjoe! I know it's not easy 
Thanks BP for your hospitality!

Congrats to this week's winners! It was really a very creative week! And just in case you're wondering, yes. I have some of Deb''s leftovers! Buffalo ribs, lasagna and pie! Color me happy!

congrats to the winners. another cool week in food. i like it.

Thanks BP and Congrats to the winners!
I

Thanks BP and congrats to the winners, a great week for sure...
Get ready everyone next weekend is a big one...Better start planning early..