Lets set a record and break my bank!

Its cold & snowing like crazy here, but you can count me in; if nothing else just for the fun of it!

I might build a snowman to monitor the pit!

Told my husband last night that the EZ Up needs to go up for the weekend No snowmen here yet, it's supposed to pour but one might just get smoked

Come on you are pelletsmoking warriors!

I feel guilty it's supposed to be 65 this weekend, might need a sweatshirt! Looking forward to it, wife asks each week now "what are you cooking for the contest?" she's a winner every week!

Well I'm waiting for some awesome pics and stories. I'll be landing in Dallas this evening and hope I've got plenty to review.

The snow is bad around here but that wouldn't stop me from using my MAK. Unfortunately the herniated disk in my back has kept me in bed since Monday evening. Don't think I'll be doing any cooking even though it is getting a bit better since the steroid shot on Friday. I can almost sit up for a minute or two without pain now.

Good luck to everyone this week.

TTNuge, I'll be looking forward to more of your wife's awesome pics of your awesome food!

TTNuge - sorry that you won't be cooking today. Hope that your back is doing better very soon.

I will do my post later but all I can say is that my husband has been unbelievably good natured through this contest.

TTNuge Soory for the back troubles I suffer from that too

Ok, I'm game.. Nothing plated (most of this isn't for us anyway, but for the winners of a charity auction I donated the meat packages to), but definitely a full weekend.

13 pound packer brisket, rubbed with Zach's brisket rub and overnight in the Traeger. 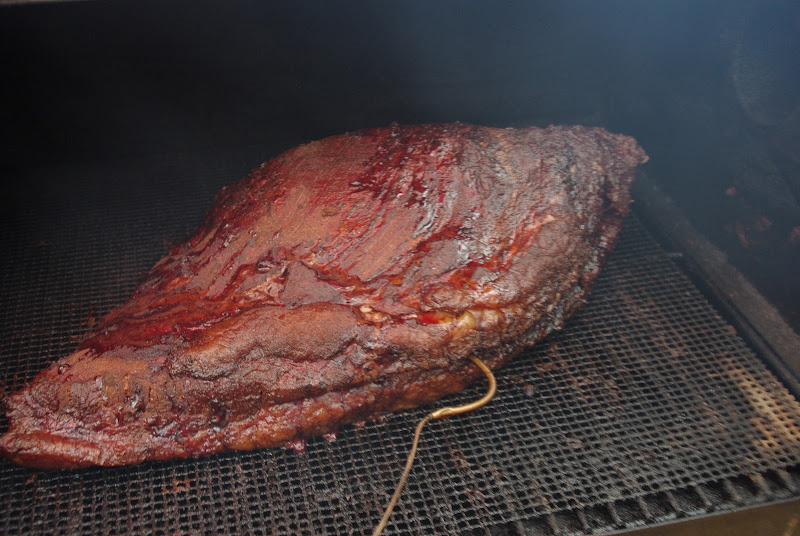 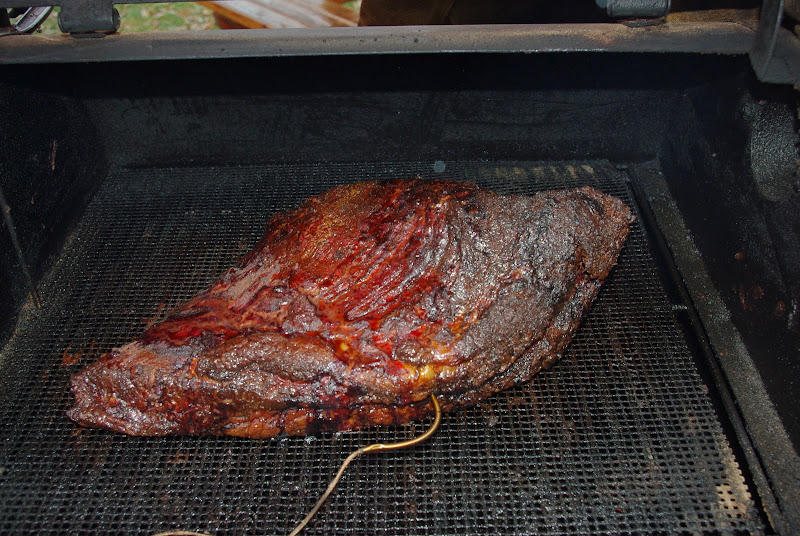 Cut into 3rds to vacseal. 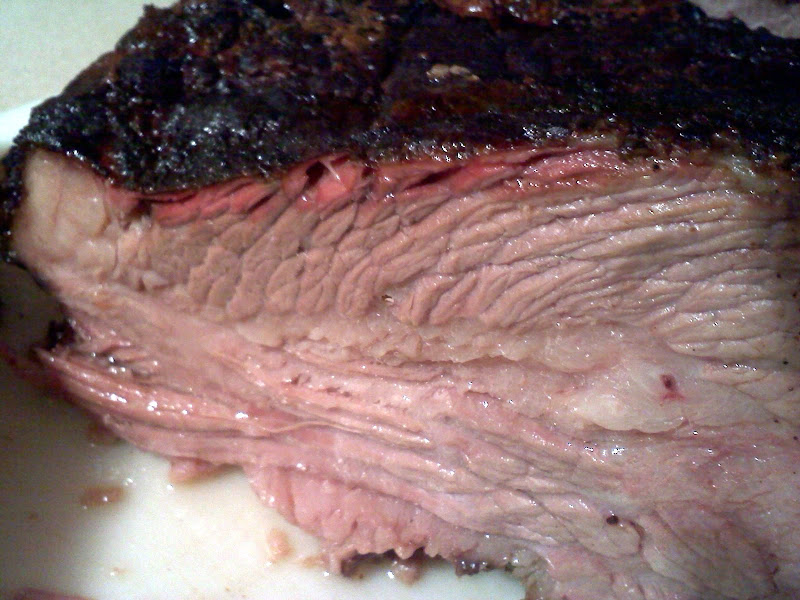 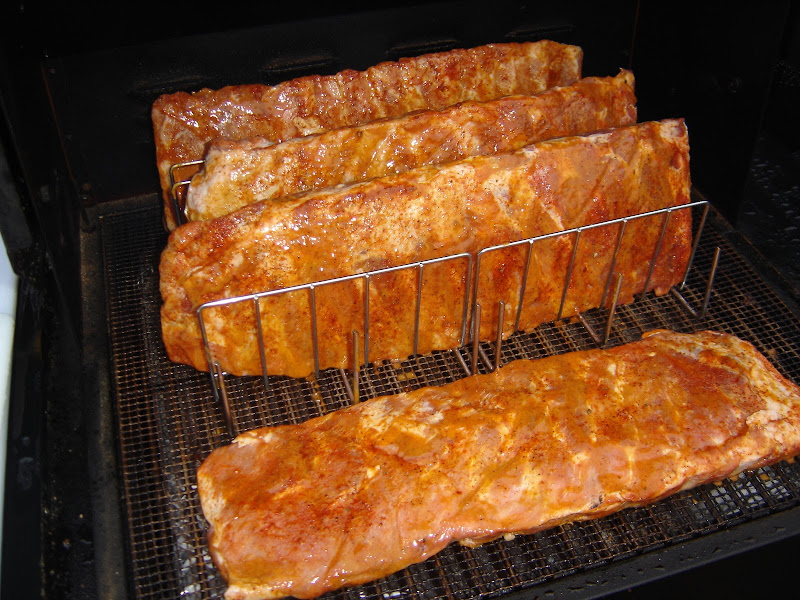 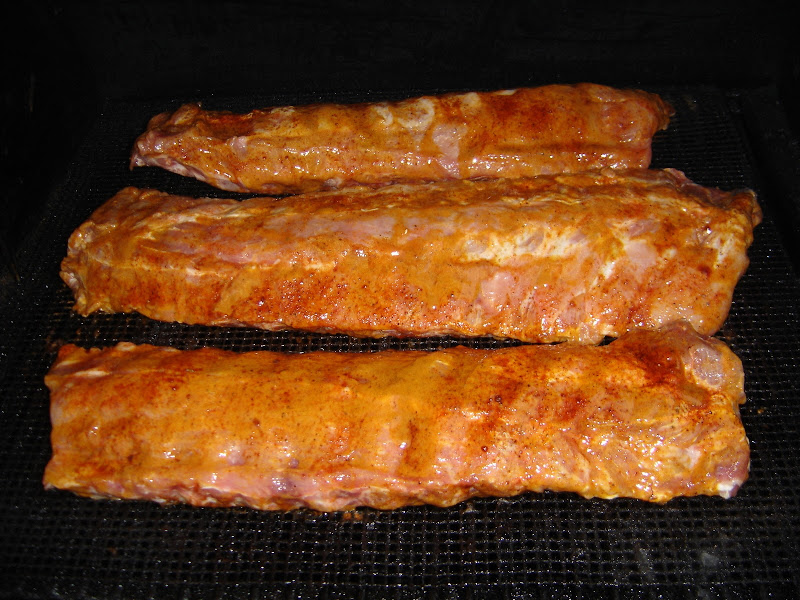 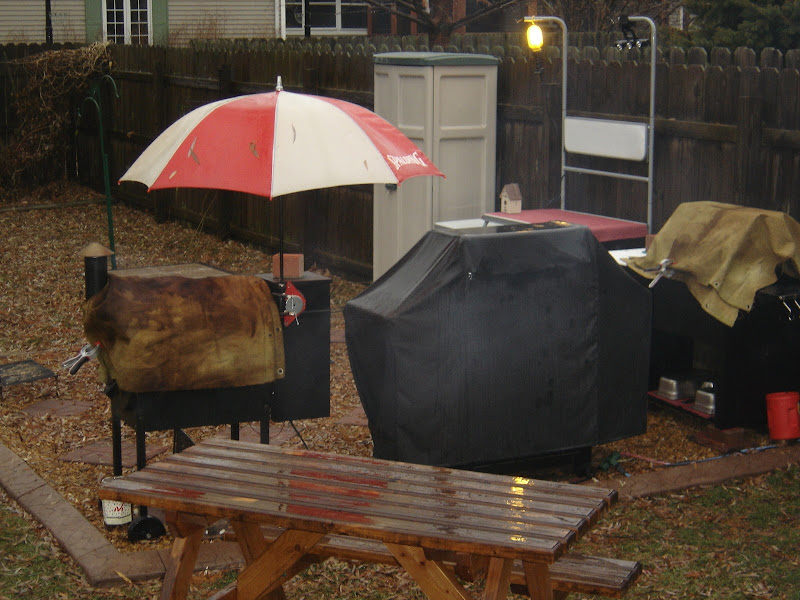 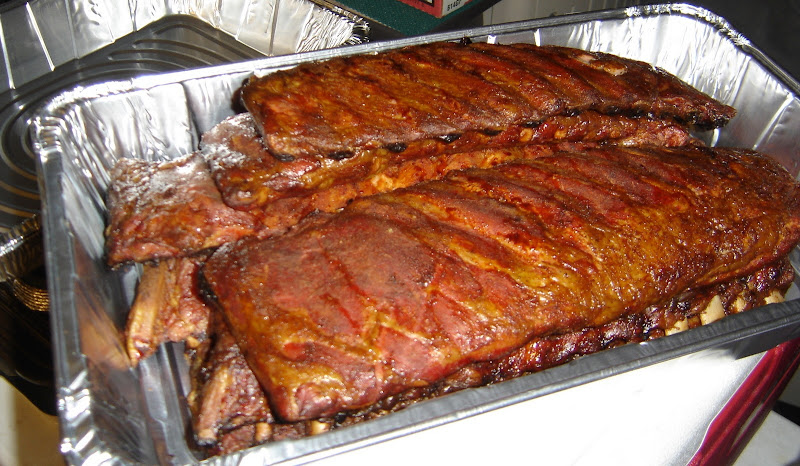 Those were for the auction winners. The rest is for us... (and friends) 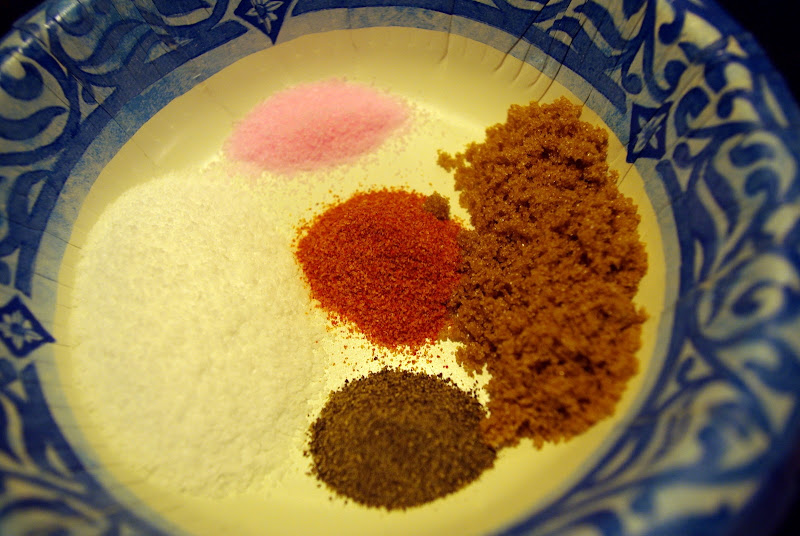 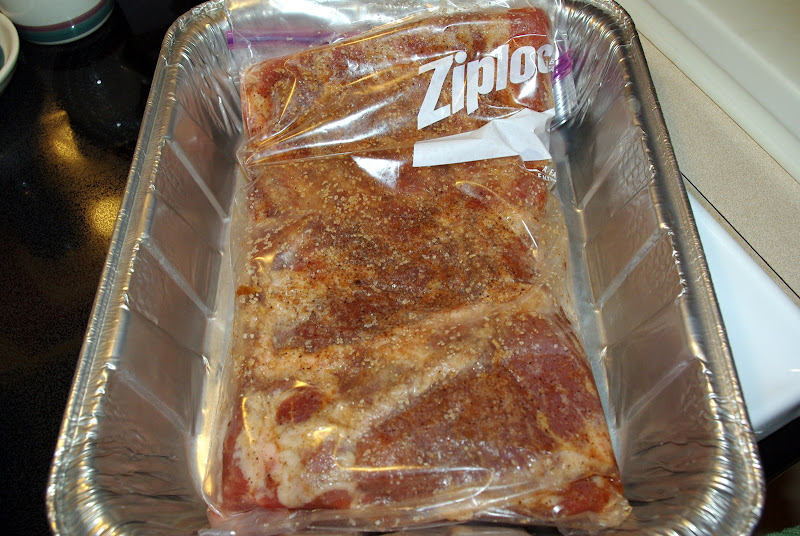 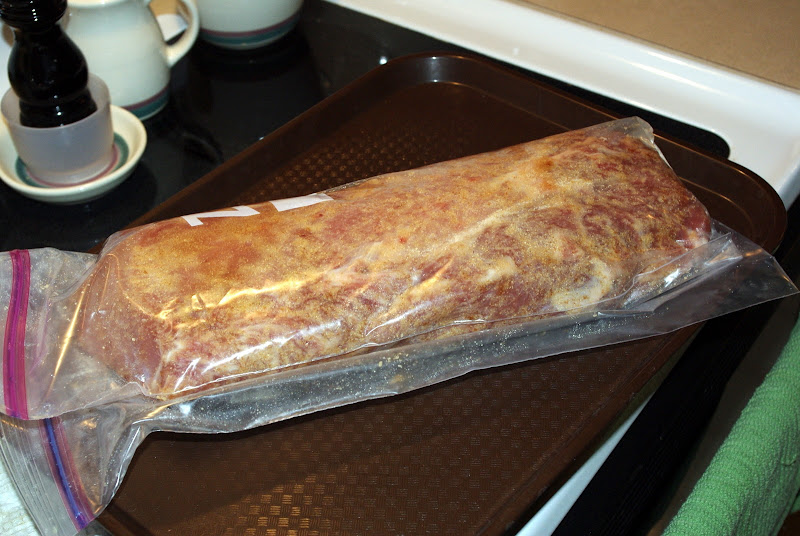 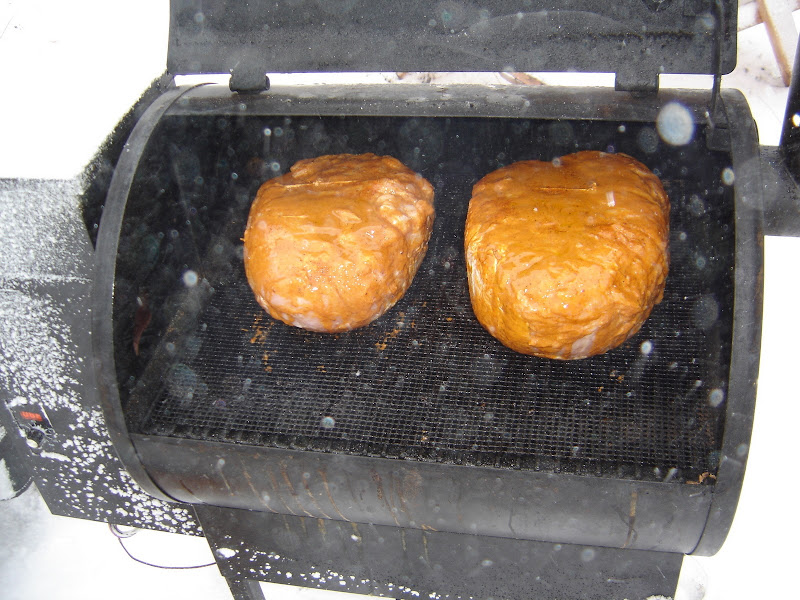 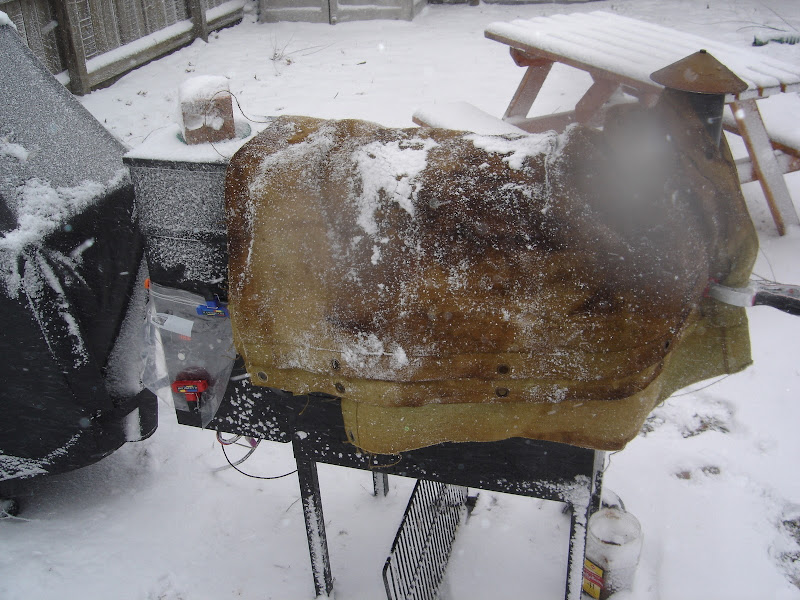 Quick run to the store. 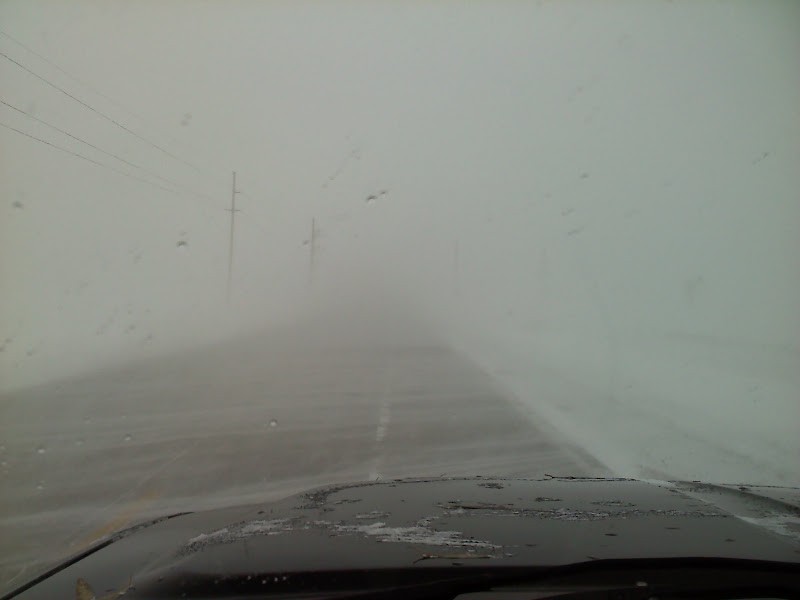 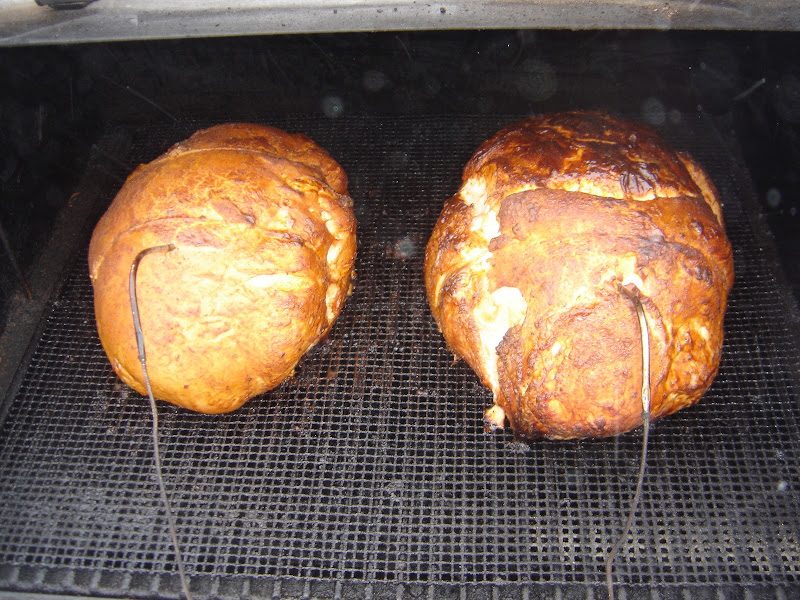 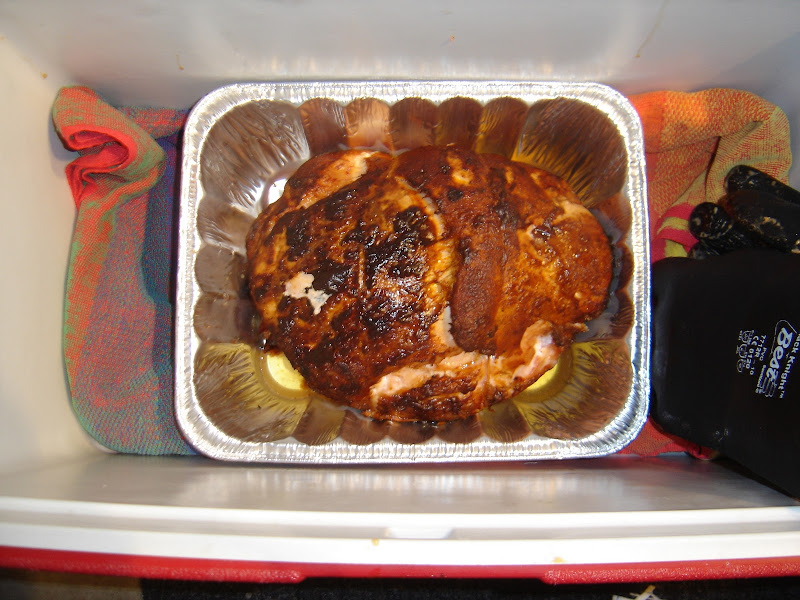 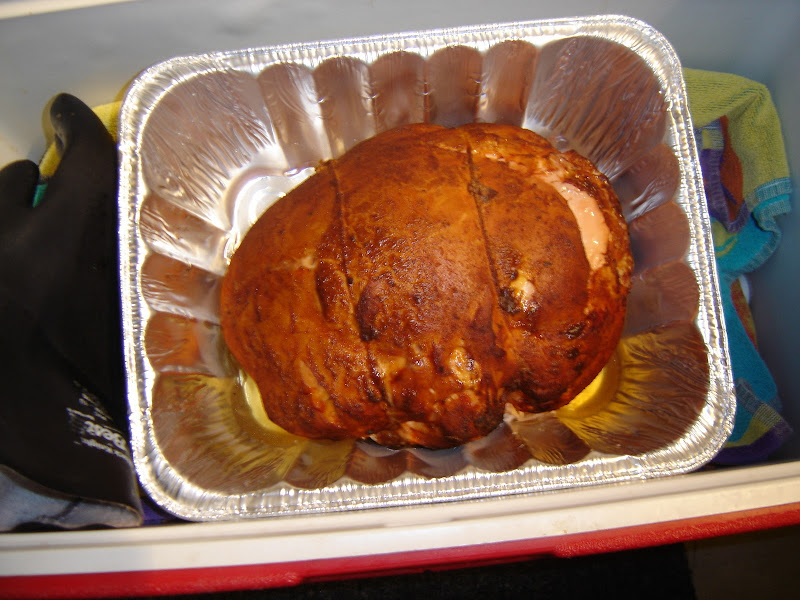 One more trip out to cover up the smoker. 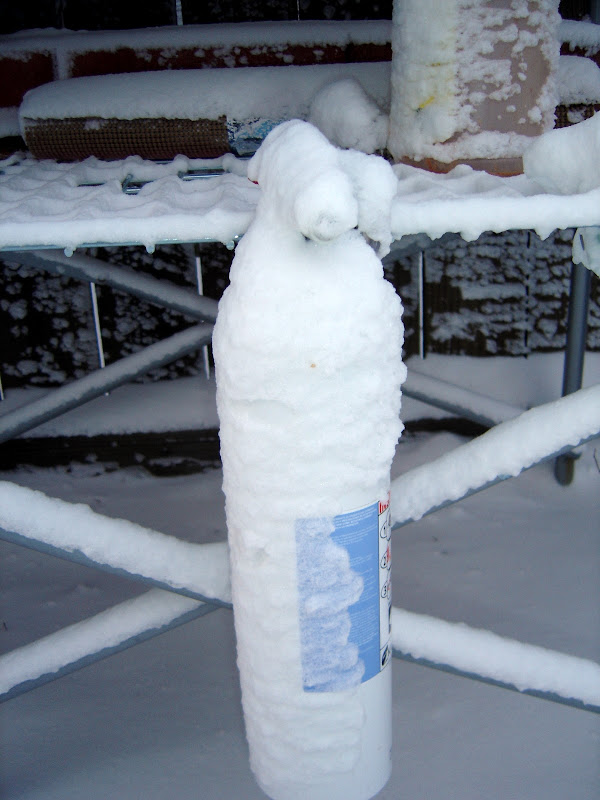 And we're done! Turkey roasts are foiled up and resting in the cooler (in the bathtub, as it was covered in snow) I'll cut them in half tonight and pop in the fridge. They'll go on the slicer tomorrow night.

Our weather wasn't quite like Squirt's - we had rain the entire time... if it had been snow we would have had a boatload...... prepared last night by putting up the EZ-Up..... might not have been the best idea of the year... but in the end it all worked out .........

started yesterday by making a quick mojo like marinade...... juice of 3 oranges & a lime, zest of each, 1/2 an onion, about 10 garlic cloves, some black pepper, a little ride around the food processor ......

on to the pork butt prep........ fought with the injector to inject some, made a bunch of slits in the pork butt and pushed it in by hand and the rest into a plastic bag with the butt for about 4 hours

out of the marinade, dried it off a little, into the Traeger on smoke for a couple hours, then up to 225 until this morning, up to 250 until it was done (threw a chuck roast in this morning also)

Made some Cuban bread.... Cuban Bread recipe | How to Make Traditional Pan Cubano I made a starter last night and then about the time the butt was coming off the grill I started the dough

after ~20 minutes in the Traeger

after the bread has cooled, time to get the sandwich started

I'm not a mustard fan so I made a little mojo inspired dressing - orange & lime juice, oil, garlic, mexican oregano and brushed it on the roll

I was going to finish the sandwich on the Traeger but after almost losing the ez up several times I was done outside.... it was strapped to the deck but it didn't quite care, I saw the legs a foot to two feet off the ground several times..... at one point my husband & I were standing outside holding it down, and he made a reference to the Wizard of Oz.......

we need to figure out a better system for securing


onto a grill weighted down with cast iron frying pan

That is by far the best pork butt that I have ever done........ I have never had an authentic cuban sandwich but these were great....

I know you wanted apps & dessert but it's two weeks before xmas and dinner on the table is a major accomplishment this weekend.... lots of food happened.... just most of it not on the pellet grill............ caramel popcorn, gingerbread popcorn (about 8 quarts of both)- both still need a little chocolate coating, 2 triple batches of cinnamon rolls - I still have one to deal with after I finish this post, roasted beef stock - this was started on the Traeger yesterday afternoon, and a 7 1/2 lb Snake River pork belly is curing for bacon......

a few pics of the stock being started, it's been strained and is cooling to be defatted

But not showing yet.

This is getting good but still no 6 entries I am trying to give stuff away!

This weeks plans got a little side tracked, was planning on doing beef wellington with a tenderloin for some friends but they had to cancel at the last minute. Rather than waste a whole tenderloin on the 2 of us the wife and I audibled and went for it with two filets

So here we go:

Got the MAK runnin might as well take advantage of the heat so I made some Persimmon Bread using pulp that was in the freezer, on the grill for and hour and fifteen

OK back to work, time to make the Duxelles. Start with chopping some Mushrooms in the food processor

Chop up some shallots

Everyone in the pool with some butter, salt, pepper, and thyme. Will cook this down until the mushrooms start to turn and then will hit with some more butter and dry Sherry.

Wrapped and hit with an egg wash, this is where I had a brain fart, after wrapping I should have flipped the whole thing. Instead we have bottom up.

Needed a side so we did Bacon wrapped green beans on the griil, loks like the beef is about ready

Wellingtons off the grill

Plated up with a salad and some of the green beans

This came out great, as I mentioned earlier I cooked these upside down via brain fart, while it did not affect flavor it affected appearance. I will definitely try this again

Whoops almost forgot there was warm Persimmon bread for dessert! Sliced it up and served with ice cream.