WAA LAAA Baby Sparky is the judge this week Come pick my pockets!

OK Sparky....Im upping the ante to get some really good cooks and I know how much you like judging So....cisco....Garth.....Thisw week is doubled!

Everyone else gets $10 store credit to Big Poppa Smokers just for entering!

Get the FT ready Spark!

Nice! Work has been a bear the last few weeks so I am looking forward to getting some cooking in this weekend!

I'll go ahead and start it off this week ... Will not predict a win like Sparky did last week but hopefully it will inspire many of you to post and make Sparky work for his $$

Salisbury Steak is one of the ultimate comfort food items of all time IMHO! Does it get any better than having your own little Meatloaf drenched in a succulent Brown Gravy and smothered with Mushrooms and Onions? I think not!!

Preheated the MAK 2 Star Pellet Grill with Hickory to 250ºF. Formed 7 Salisbury Steaks and a large meatball for the Pit Master. Would have used Oak pellets but ran out and you can never go wrong with Hickory! Waited a ½ hour for the Salisbury Steaks to firm up before inserting meat probes. Took 1½ hours at 250Fº to reach an Internal Temperature (IT) of 150ºF. When making a Meatloaf I take it to an IT of 160ºF but the Salisbury Steaks will be going back into the MAK for the finishing touches. Bumped the MAK temperature to 350ºF for the next phase.

Placed the Smoked Salisbury Steaks back in the MAK at 350ºF for 45 minutes.

Now honestly, can anyone resist diving in?

The money $shot ... A Hickory Smoked Salisbury Steak, Mashed Potatoes and Brown Gravy with Mushrooms and Onions, a side of Corn on the Cob, and some Orange Flesh Honeydew Melon washed down with a glass of Cabernet Sauvignon ... Life is good ... Bon Appétit

All marinated in a mixture of lime juice, tequila and spices (the Mrs did the marinating)

Shrimp was last due to short cooking time and allergy issues

I staged the chicken and beef in a foil boat in the MAK warming area while I cooked the shrimp.

The Mrs made some onions

I missed the shot of the chicken, but you get the idea.

The flavor was great, and having all three meats was a treat. There were few leftovers.

put a griddle in the grill, turned it up to 450 and let it heat up, sprayed the chicken with a little olive oil and then onto the griddle
this is after turning

when chicken was almost done I took out, put in pan with some spaghetti sauce, topped with a little more sauce, some mozzarella & some parmesan cheese - back in, a little bit later added some garlic sourdough bread

Kevin's dinner plated with some whole grain linguine... (he was hungry) but there's some left for you Sparky!!

My entry is a Filet Mignon with a home made lemon hollandaise sauce, baby red twice baked potatoes and grilled asparagus.

First off I started with the potatoes. I baked them until partially done then sliced them in half. Once cool enough to handle I holed out the center.

I mixed the scooped out potato with some shredded cheddar cheese,butter, salt and pepper. Next I just put that into the hole in the potato, put a little onion on top and it's ready to bake.

While those are baking I washed and trimmed some asparagus. This went on #390 as well.

Now it's time to get the hollandaise sauce going.

First I melted the butter and set it aside to cool to room temperature.

Next in a small sauce pan over medium - high heat I cooked the onion, 1/4 ts of the salt, cayenne and vinegar until the liquid evaporated and the onion was dry.

After that I removed the pan from the heat and added the water and stirred it in.

Into a food proccessor goes the onion mixture, three egg yolks and 1 TS of the lemon juice.

While the proccessor is running on low add the butter and run it until the mixture is smooth. You can season the sauce with the remaining 1/4 ts of salt and the lemon juice.

Now it's time for the asparagus to come off and the filets to go on!

The filets only got a little fresh ground pepper and ground sea salt.

The potatoes were nice and toasty and had to come off.
Whoa! Looks like a couple spears decided to jump into the fire! I didnt see it until the flash from the camera gave them away

To be continued again..

Ok it's now time for plating!

The filet was cooked to a nice medium rare to medium and I put a dollop of sour cream and some onion on the potatoes. The asparagus got a drizzle of the hollandaise sauce as well as the filet. I added the lemon slices as a garnish.

The potatoes had a nice crust to them, the asparagus had a bit of a bite to it not mushy at all.
The filet was melt in your mouth tender! It's a shame I cant afford to eat it every day

I hope you all enjoy looking at the pictures as much as I enjoyed cooking and eating this!

Warm the bread and layer on the hot chicken/bacon. Add tomato and mozz cheese and put under the broiler for about 90 seconds. Pull and top with basil and chopped avocado.

Spark we will keep the same cut off just announcenthe winners on Monday afternoon or evening thanks!


Kevin Arsenault said:
To me, ribs are possibly the greatest food in the world
Click to expand...

so being the nice mom that I am and the fact that it is the last full weekend that Kev is home before he goes back to school I had to buy ribs. We decided do them two different ways, each doing our own.

I was inspired by Squirts Char Siu chicken last week - I did a little googling and came across a char siu marinade recipe at amazingribs.com. I gathered together the ingredients (I was missing the five spice powder but had 4 of the five spices so went with that, missing star anise)

mixed it up, into a bag with one of the racks of ribs (cut in 1/2 to fit in the bag), into the fridge for about 6 hours

onto the pellet grill for a few hours, then onto some foil love time (Kevin's ribs are Sparky/TH inspired)

my FL shot , into the foil with some more of the char siu marinade and some honey

Sparky - take your pick or have some of both (Kevin did), there is one FT hiding in the beer fridge

A spatchcock chicken seemed like a good way to get back to eating some healthier food. I simply sprayed it with some Annie’s Garlic EVOO and mixed up some balsamic vinegar with Dijon mustard and fresh garlic and spooned it under the skin of the bird and then plopped on the Weber with a mix of apple and oak pellets in a foil packet.

I plated it with some red Quinoa salad mixed with diced shallots, cilantro and a bit of fresh lemon juice. And as the tomatoes are coming in fast an furiously, some sliced tomatoes.

I enjoyed it! Hope you did too.

Took the MAK on a little road trip this weekend...

Some members of the Bradley Smoker Forum got together for a Midwest 'smoke out' up in Cascade Iowa. (just down the road from Dyersville, where the Field of Dreams was filmed)

I offered to help cook, so I packed the MAK and headed North. 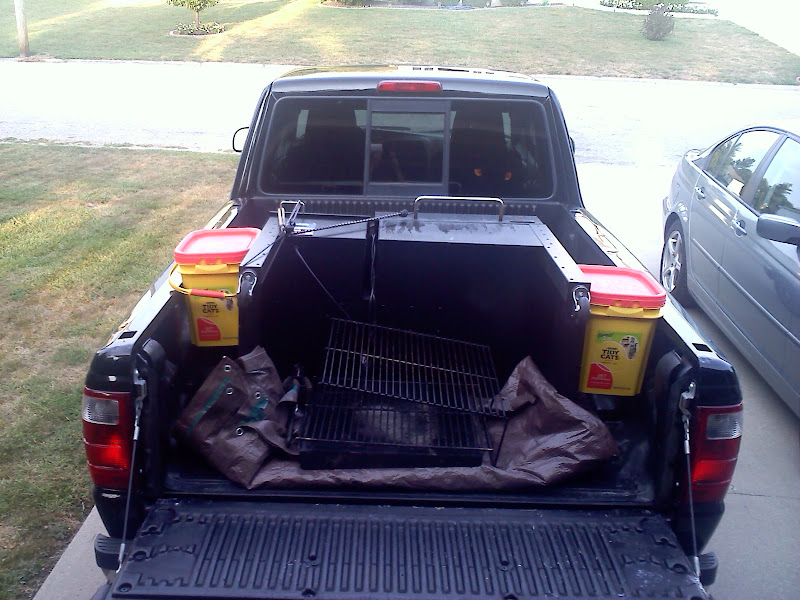 My MAK plus the host's (used to be Nepas') Traeger, fogging the neighborhood. 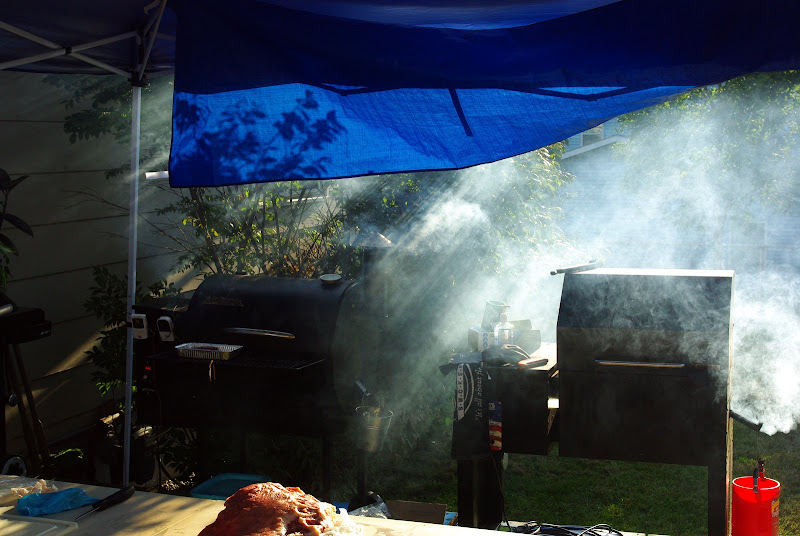 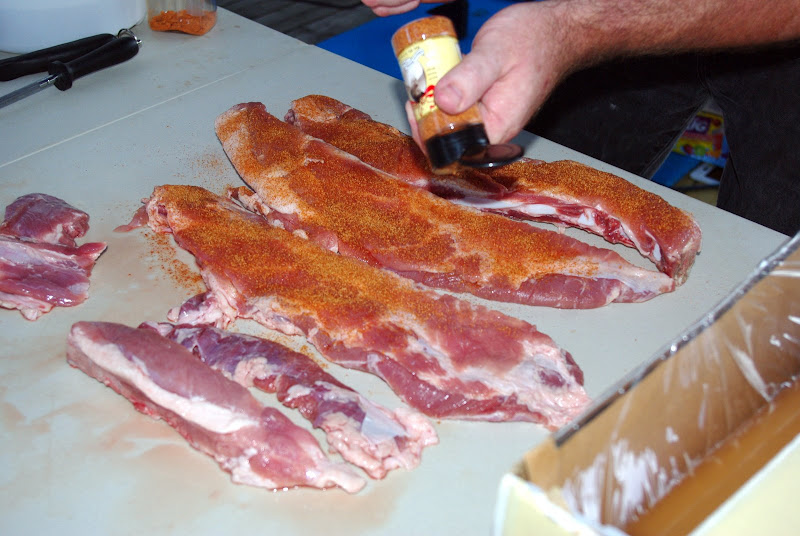 Into the MAK. Hot and fast. 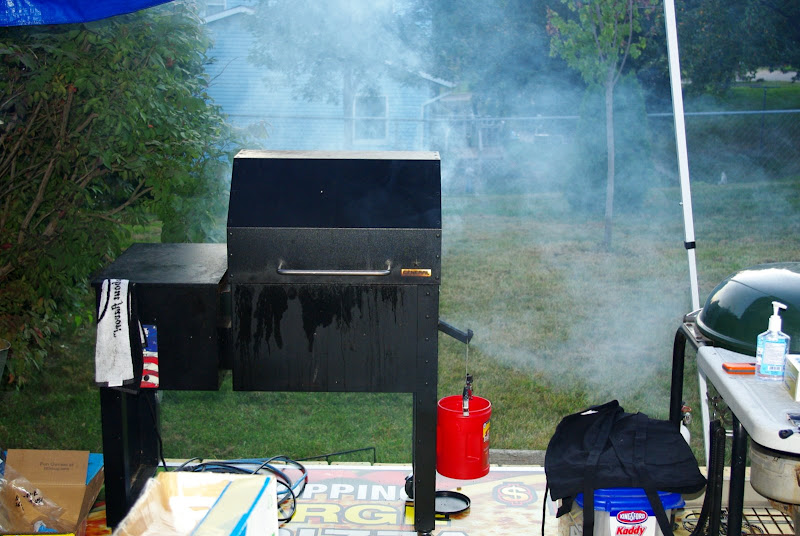 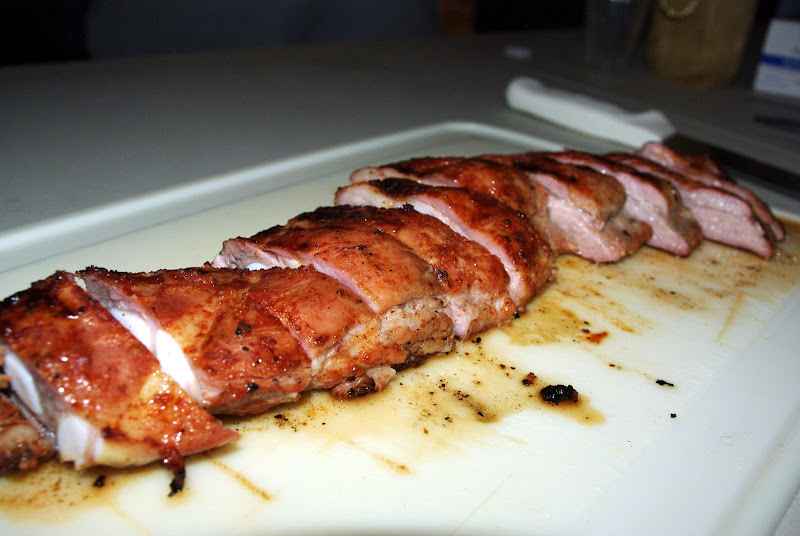 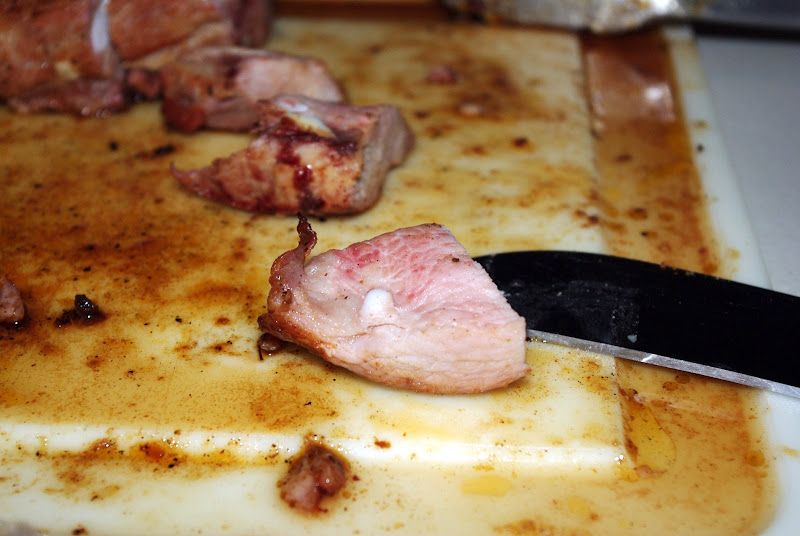 The next morning, time for some tri-tips.. 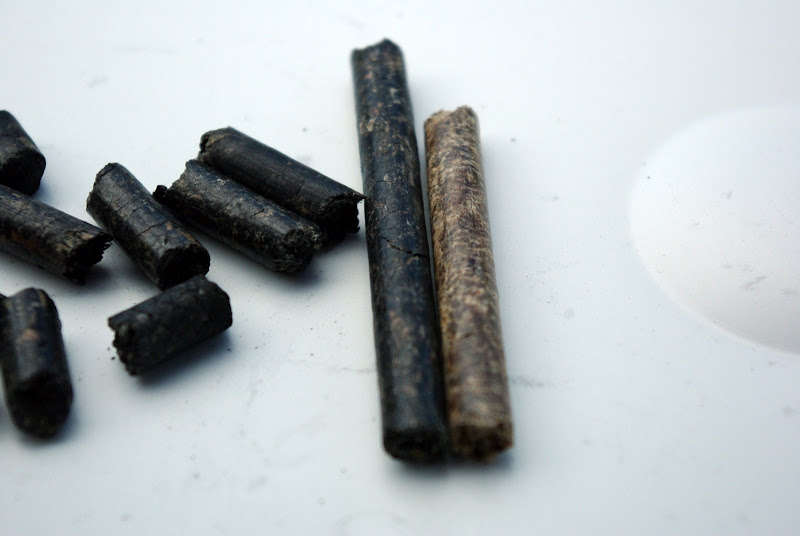 Trimmed up and ready for some Gunpowder rub. 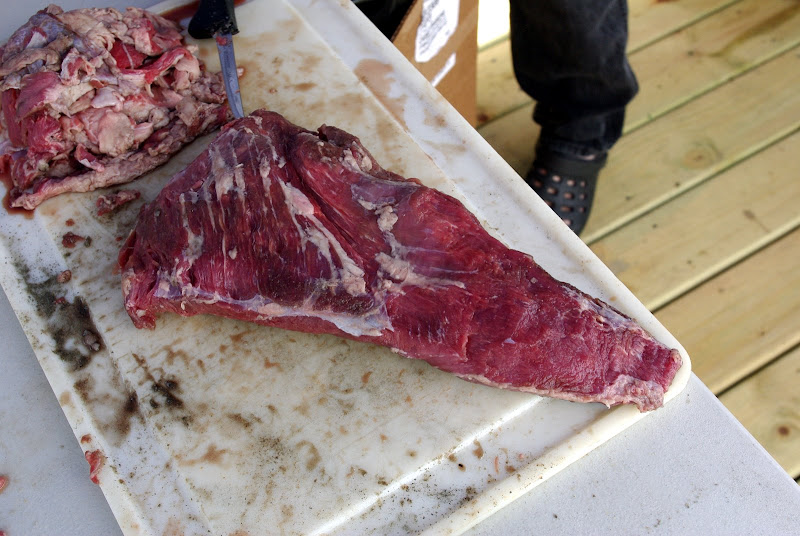 And stacked in the MAK. 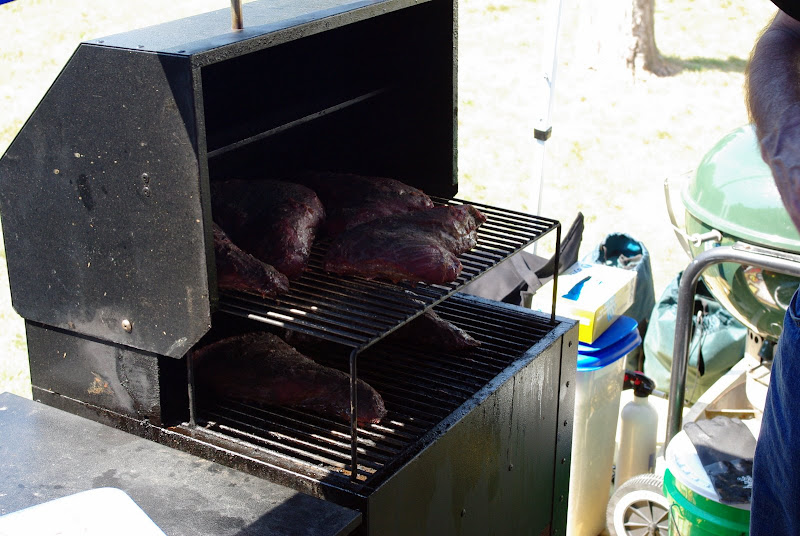 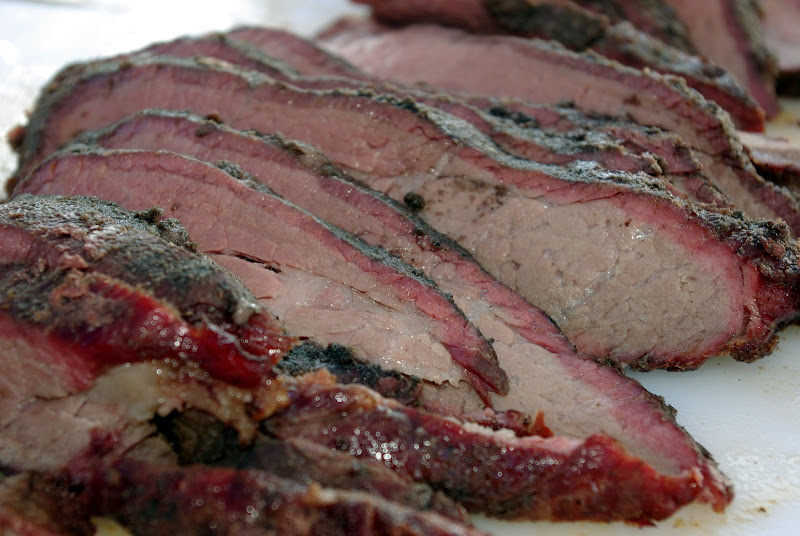 Took the MAK on a little road trip this weekend... (cont)

Meanwhile, short ribs on the Traeger. (and BACON!) 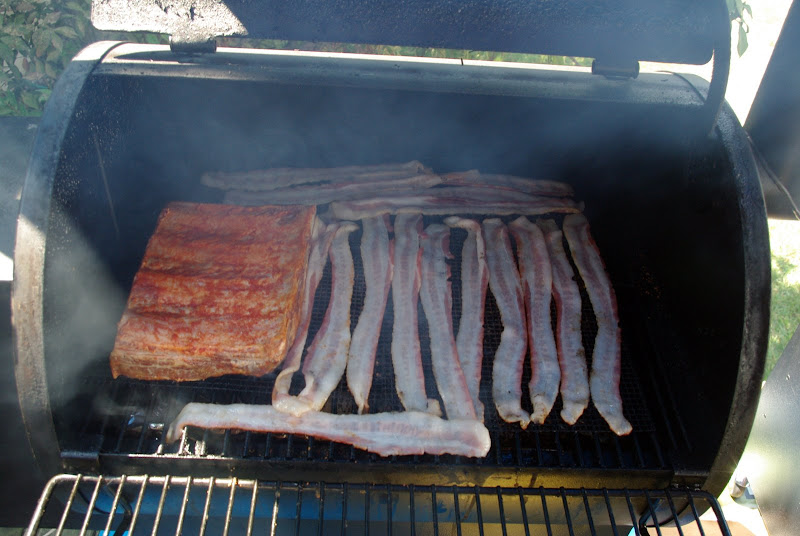 Couple hours of smoke and we boat them with some rib and brisket foil drippings, plus a bit of Amish BBQ sauce. 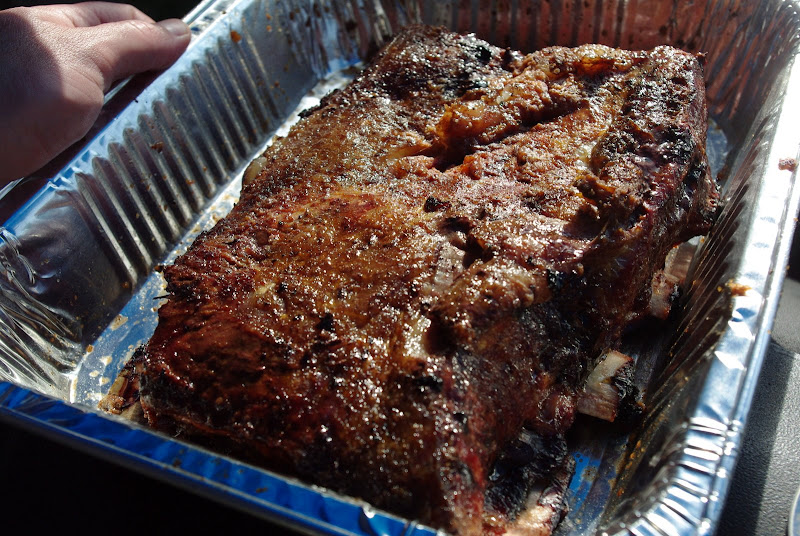 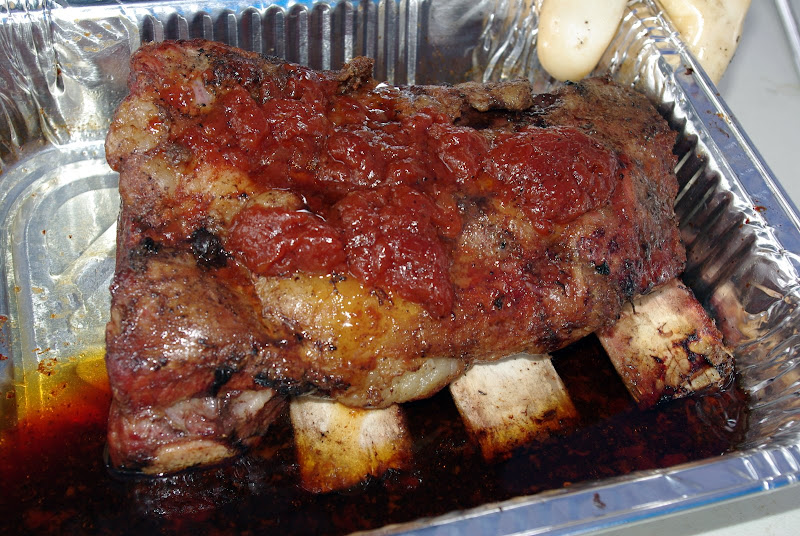 My bucket list was telling me I needed to experiment more with seafood so I thought why not? I stopped by the local fish market and picked up some supplies. I first saw they had some fresh sockeye salmon so that immediately went into my brain cart. Next, I thought what about something to accompany that nice filet … I know I’ll get some shrimp.

I cleaned up the shrimp and made a marinade using fresh parsley, lime juice, olive oil, fresh ground pepper and sea salt. Into the bath they go for a couple of hours. Next is the salmon prep. I decided to go for a sesame ginger marinade – yea it’s old school but always tasty. After washing the fish and deboning, into the sauce she goes.

Okay, I’ve got the proteins covered now what to do for carbs … Well the garden is just busting with fresh tomatoes at the moment and there’s continual sweet basil shooting skyward so I guess it’s time for a tomato-basil-garlic salad. Alright, got one cold dish and why not a sweet potato for a starch. I made up some cinnamon butter to top it off.

The whole meal was delicious. The fresh tomatoes and basil was a great reminder to enjoy summer while it’s here. The sweet potato and cinnamon is – well – always a good side. The sockeye was just outstanding cooked to IT of 165. And then there are the shrimp. Man those shrimp smelled simply phenomenal coming off the MAK. But that was just the teaser; I was really impressed by the flavor even after de-shelling the shrimp. Man this is fun!
You must log in or register to reply here.
Share:
Facebook Twitter Reddit Pinterest Tumblr WhatsApp Email Share Link
Top Bottom