11-4 Contest Make us proud Dazzle us for poppas cash!

$10 dollar bonus for ribs...in honor of Johnny Trigg....Sparky likey this

Is that ten dollars per rack?

$10 dollar bonus for ribs...in honor of Johnny Trigg....Sparky likey this
Click to expand...

I think Sparky should be disqualified! (;-)


Sent from my iPhone using Tapatalk
B

I guess Ill start it off with some Ribs!! Couldnt have been better timing!! Picked up a pack of Baby Backs from Sams also had an extra half rack in the freezer that I took out.. Mustard rub down on all 3 and 1/2 rubbed one with Little Louies SGS with pepper, one with Obie Cues Sweet and Heat and one with Soileaus Cajun.. The half rack was Little Louies and Obie Cues..

Threw some beans on and foiled the ribs after about 2hrs...Let em ride for about an hour..

Unfoiled for about 1 more hour then sauced with Blues Hog on one and Memphis Sauce on one... The other rack with the cajun rub and the half I Tried with no sauce..

Came out great as usual!!! Just would have wished the cajun had a little more kick to them, I may have went a little light on it.. Love doing ribs on the MAK!! Like everyone else, just looking for that great flavor profile...So many possibilities!!
J

Hey Bflodan, I am curious......why rub mustard on the ribs first? Does it leave a mustard taste? Do u use it on pork butts as well?

Thanks, Jim aka JimmyDings
J

Meatballs on the Mak

ok peoples, I have never done ribs and do not feel I am ready for that, so I tried something different.

Smoked Meatballs on the Mak 2 Star

Pulled a meatball receipe off the internet, as I've never made Meatballs before
Rolled em up to try and make 1 1/2 to 2" ballsView attachment 935

Smoked till "IT" reached 140View attachment 937

Cooked on low for an hour and served with Whole Grain spaghetti
THE MONEY SHOT!!!View attachment 939

The amazing thing about this meal was how the smoked meatballs changed the overall taste of the sauce......OMG, I've found a true favorite and my Wife, Dad and Kids raved about it

Best wishes all, Jim aka JimmyDings

ribs, I can do ribs

I decided to change them up from the normal ribs... the char siu ones I did a few months ago were good but I wanted to try them again with a few changes to the recipe...... last night I made the char siu marinade and put the ribs in. I also put some steak tips in a teriyaki marinade ....... and cooked some jasmine rice to use for fried rice

got the ribs on the grill , this is a little bit before foiling

I missed pictures of the egg roll & fried rice prep

then I started dessert -- cut up some pears, mixed with a splash of lemon, brown sugar, cinnamon and a few diced up cranberries. Placed a layer of semi-sweet chocolate chunks down on an egg roll wrapper, then the fruit on top and then rolled them up.

dinner all plated up

the ribs were cooked a little more than I would have liked, I had a hard time getting a good picture but they were awesome. They were not dry like the one above looks . The char siu flavor was great this time. Now I need to figure out what I did and document it

dessert - pear, cranberry, chocolate egg roll
for a throw together dessert this was awesome & the picture doesn't do it justice

yes i am. i am always worried when you cook. your very good at it.
B

JimmyDings said:
Hey Bflodan, I am curious......why rub mustard on the ribs first? Does it leave a mustard taste? Do u use it on pork butts as well?


More or less a glue for the rub to stick to... Mustard is very mild I think... You can taste it very little... Yes I have used it with pork butts!! I usually use Carolina Treet with both...Either is very good...
J

i don't really like the weave when you make a fattie so i did something a little different. i frame it w/ bacon then cut the bacon to fit going only 1 way. that way not to much bacon on it.

some of this and some of that.

onto a frogmat for some smoking time. 1 hour smoke then to 275º.

got some yumminess going on here.

cut up on top of a english muffin.

3 eggs and some blues hog on top.

da winner and i didn't even have to make ribs. thats right, i am that good. thank you, thank you.

(forgive the first 2 blurry shots, somebody turned off the auto-focus on my camera )

CAB tri-tip, after the hack job I did trimming it. 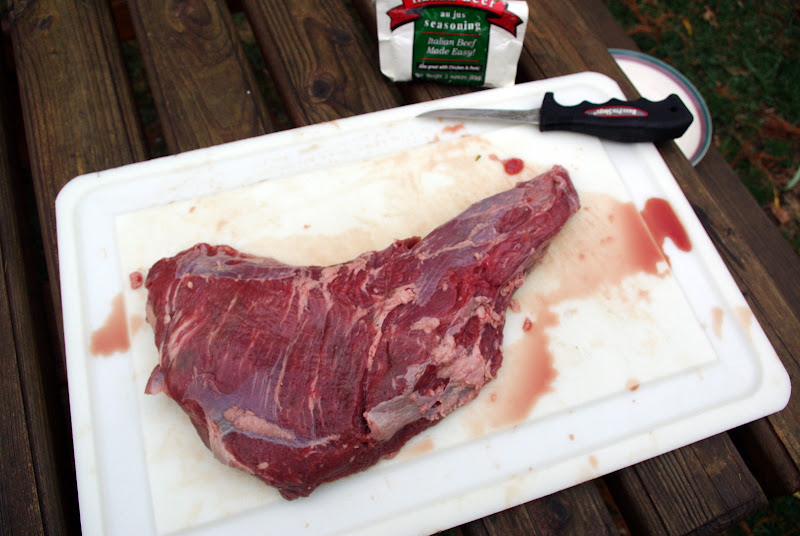 Rubbed down with some Wooster and Louie's Italian Beef seasoning. 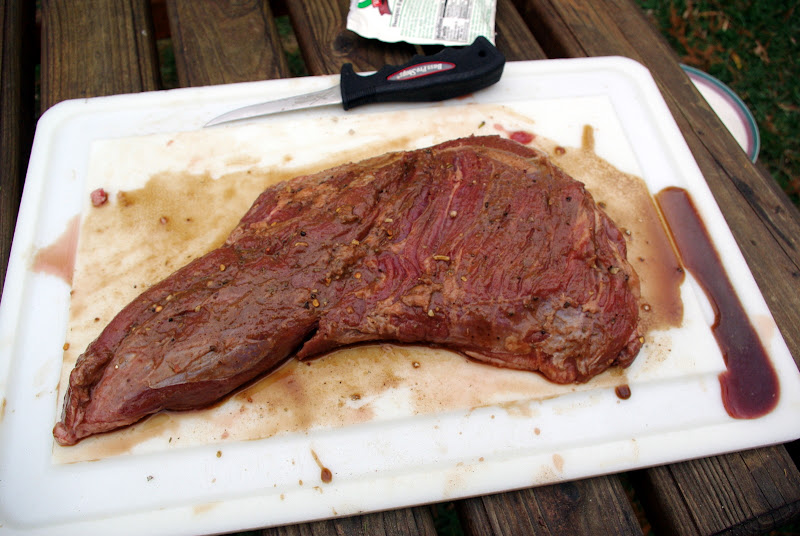 Onto the MAK over the direct/indirect flame zone. Running around 275° at the grate. 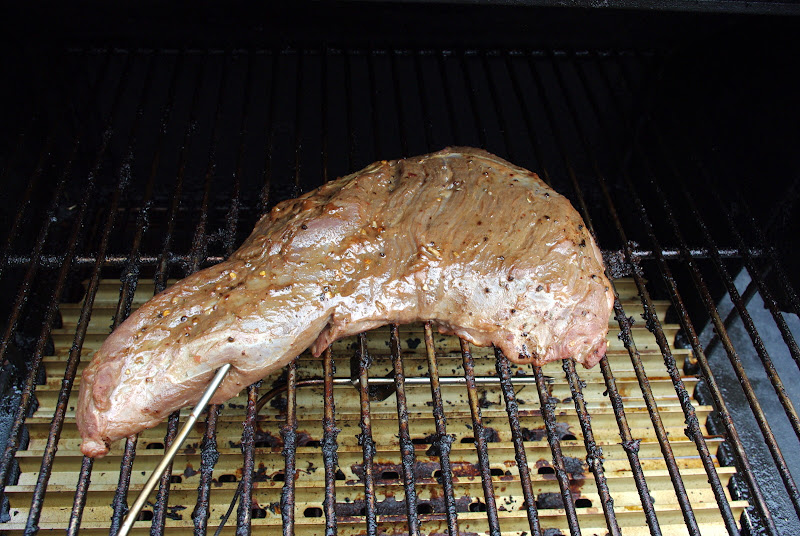 --
Getting some color, time to flip. 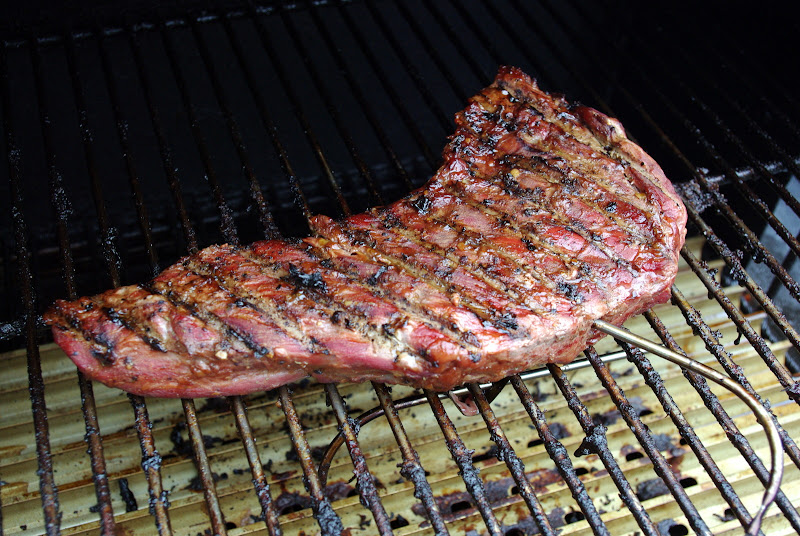 And about 25 minutes later (dang these cook fast), I get a 145° reading. I didn't want to stab it anymore, so we'll call it close enough. 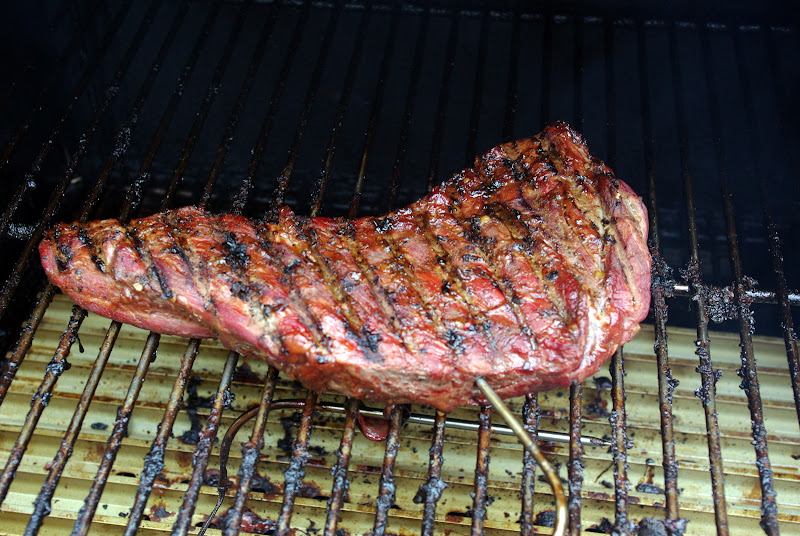 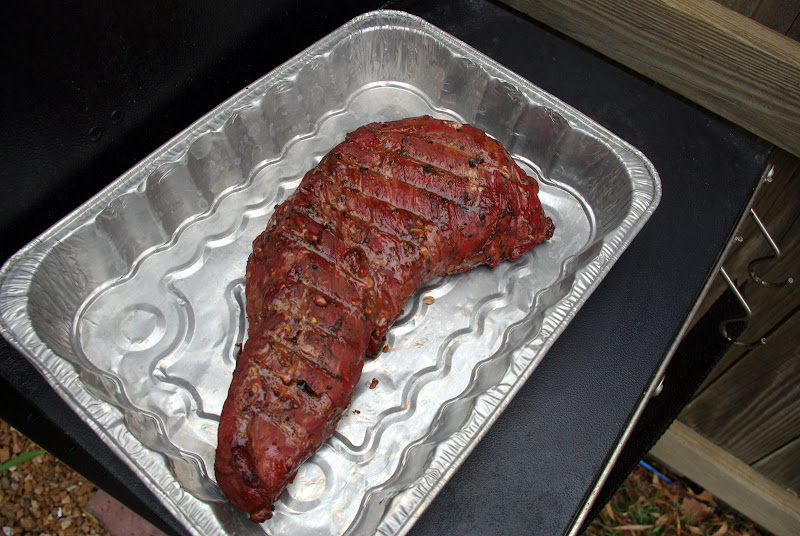 Wrapped tight in foil and resting in the microwave for a while. Then after some fridge time, a sharp knife and a cutting board, Part II continues.. Kinda hard not to tear into it now. Stupid time change.

After some microwave/fridge time, I sliced it up. (crappy phone pics) 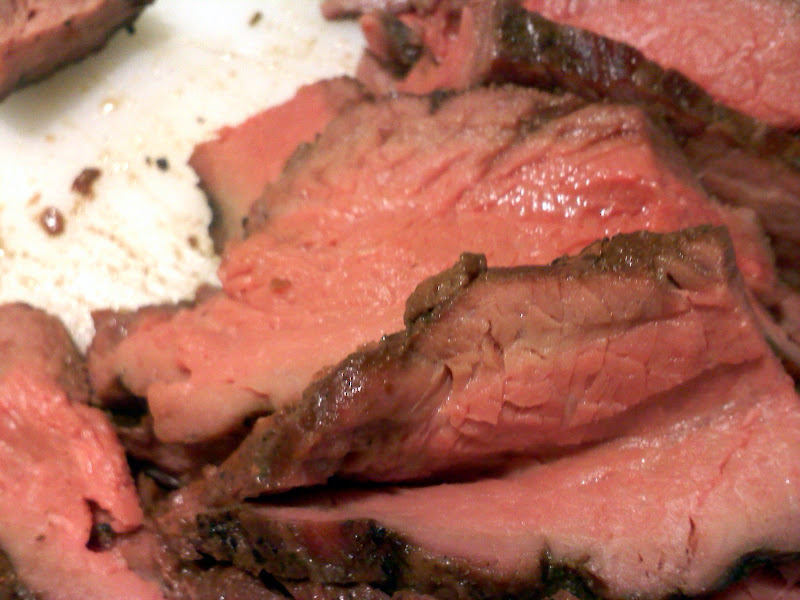 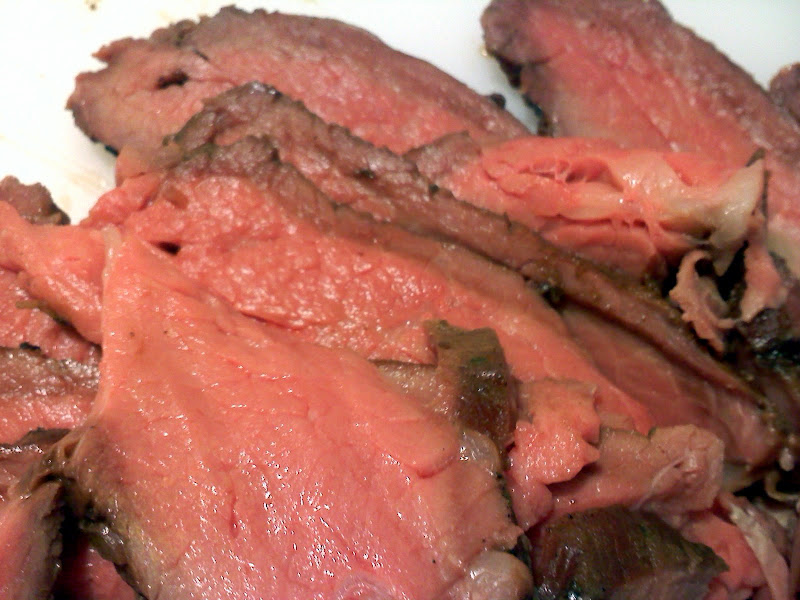 Line the slow cooker with Pepperoncinis. 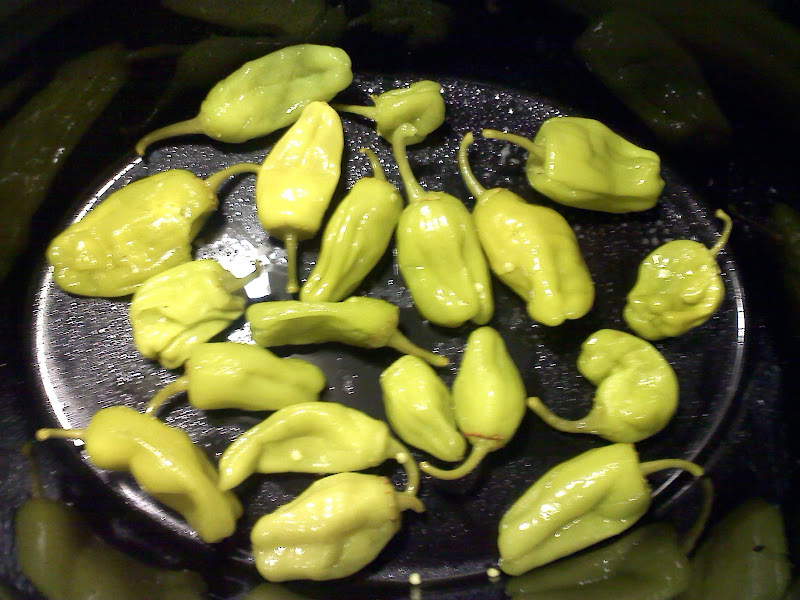 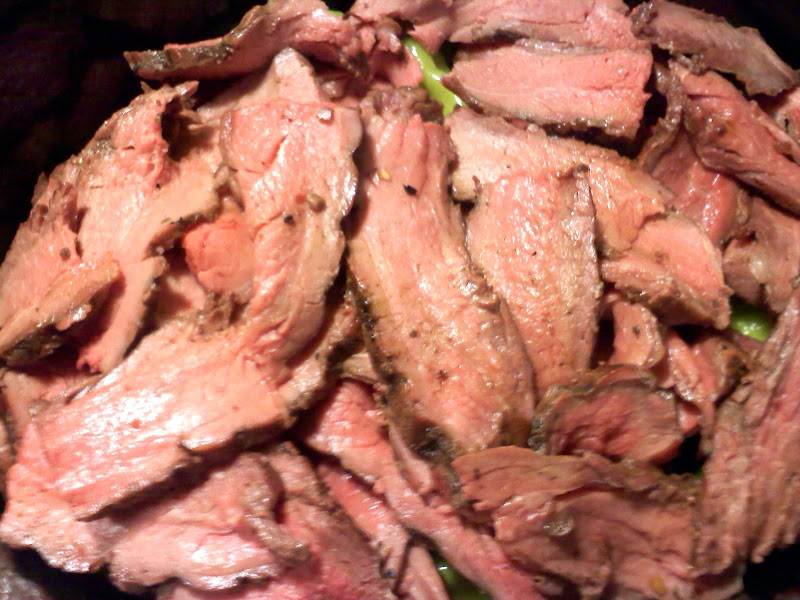 Mix the pepperoncini juice with some of this. 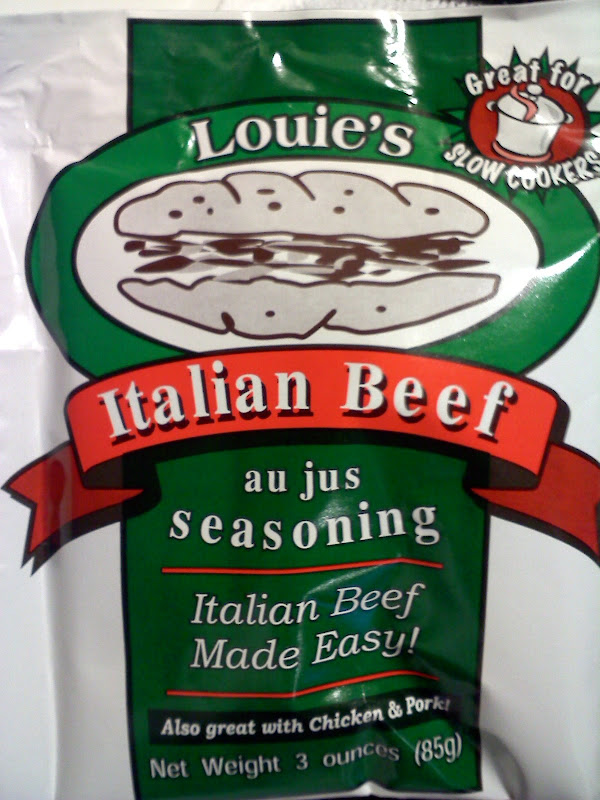 Kind of a funky green slurry. 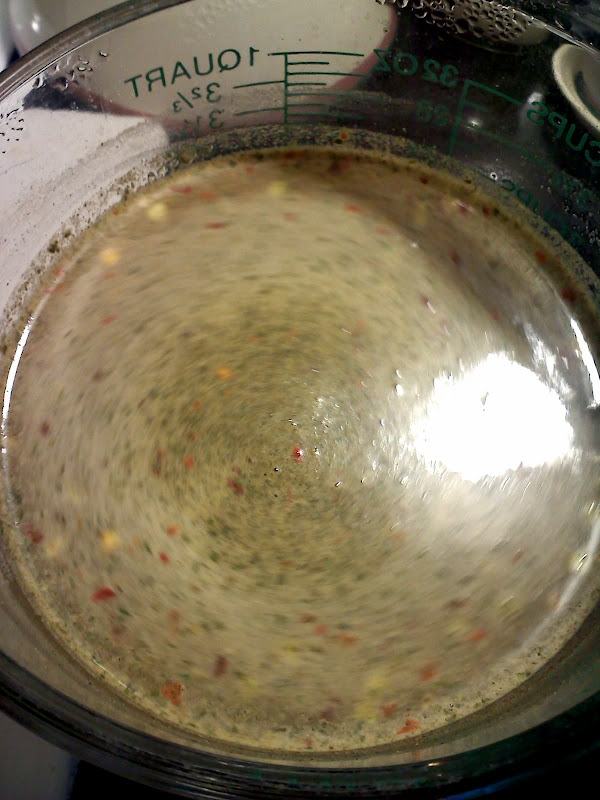 Partially cover the beef with the hot mix, and dump in the rest of the peppers. 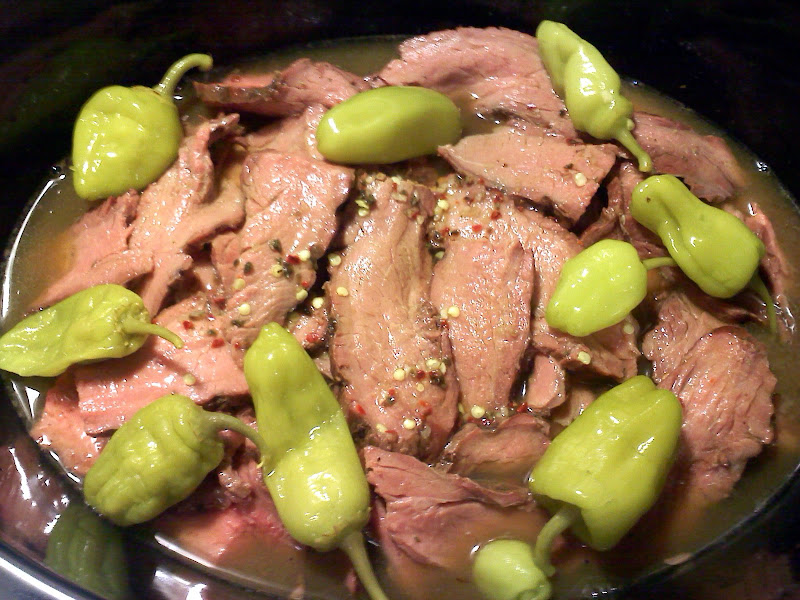 Got the real camera out. 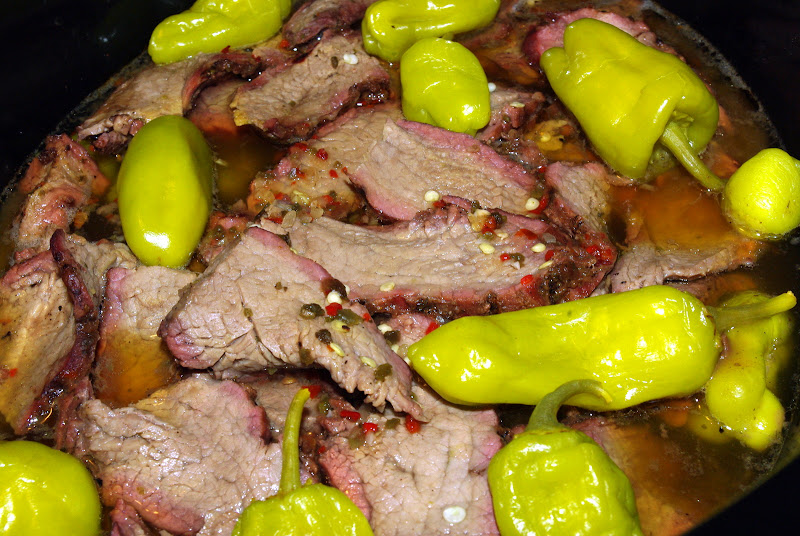 Topped with some of the Louie's Au Jus + pickled pepper juice + foil drippings for gravy. 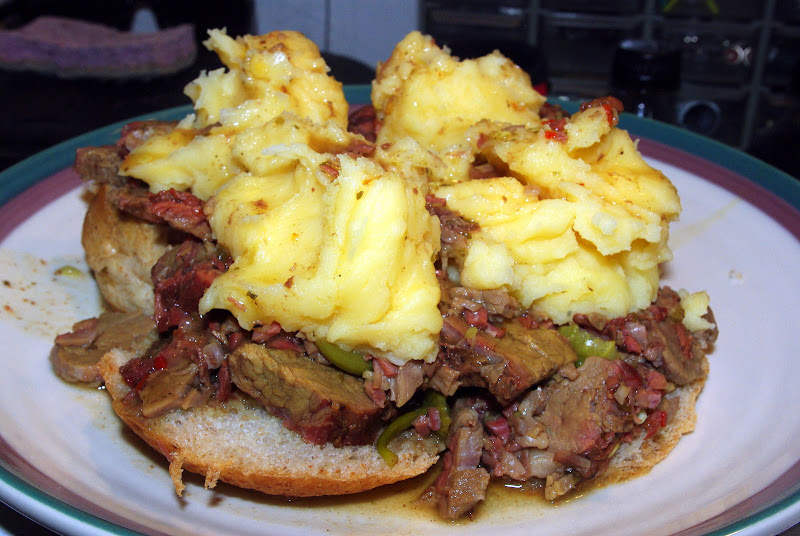 I appologize for the short descriptions ect but I'm short on time..

1st place goes to Deb!
Those char siu ribs and rice look perfect Deb! And that dessert..Pear, cranberry, chocolate roll..WOW I would never have come up with that! I want some!

Second place goes to Squirt!
Those tri-talion beef tip sliders..OH MY GOODNESS! That last picture had me at hello!
That louies is good stuff!

Third place goes to Sparky!
Sparky that 49'r fattie looked awesome! The eggs on top with the blues hog did it for me! I'll be making that one with one change to make it better..DA BEARS on top


Thanks BP for what you do!
Congrats winners!

congrats to deb and squirt. thanks chili for judging and bp for letting us play.

Thanks Chili! Another great week. More ideas to jot down and try later...

Great job everyone, congrats to all the winners!
B