Thanks to Nepas for allowing me to repost this here.

I get asked about this a lot.

CURES - Cures are used in meat products for color and flavor development as well as retarding the development of bacteria in the low temperature environment of smoked meats.

Salt and sugar both cure meat by osmosis. In addition to drawing the water from the food, they dehydrate and kill the bacteria that make food spoil. In general, though, use of the word "cure" refers to processing the meat with either sodium nitrite or sodium nitrate.

The primary and most important reason to use cures is to prevent BOTULISM POISONING (a serious food poisoning). It is very important that any kind of meat or sausage that will be cooked and smoked at low temperature be cured. To trigger botulism poisoning, the requirements are quite simple - lack of oxygen, the presence of moisture, and temperatures in range of 40-140° F. When smoking meats, the heat and smoke eliminates the oxygen. The meats have moisture and are traditionally smoked and cooked in the low ranges of 90 to 185° F. As you can see, these are ideal conditions for food poisoning if you don't use cures.

There are two types of commercially used cures.

Cure #1 (Curing Salt #1, Prague Powder #1, InstaCure #1, DQ Curing Salt #1)
Used to prevent meats from spoiling when being cooked or smoked at low temperatures. This cure is 1 part sodium nitrite (6.25%) and 15 parts salt (93.75%) and are combined and crystallized to assure even distribution. As the meat temperate rises during processing, the sodium nitrite changes to nitric oxide and starts to ‘gas out’ at about 130 degrees F. After the smoking /cooking process is complete only about 10-20% of the original nitrite remains. As the product is stored and later reheated for consumption, the decline of nitrite continues. 4 ounces of Cure #1 is used to cure 100 lbs of meat. A more typical measurement for home use is 1 level tsp per 5 lbs of meat.

When using a cure in a brine solution, follow a recipe.

It's important to understand that 1 tsp of Cure #1 per 5 lbs (or 4 oz. per 100 lbs) is the MAXIMUM allowed amount for comminuted (ground) meat in the U.S. by USDA regulations. This equals 156 Parts Per Million. Europe limits this to 150 PPM.

However, it's generally accepted (even by the USDA) that only about 40 - 50 ppm (for ground meats) is required for the nitrite to have a curing effect.

My point is this: Measure carefully and use the recommended amounts, or a little less, but never more! DO NOT use heaping teaspoons when measuring; use LEVEL or even scant teaspoons!

"Pink Salt" A bad practice I often see in forums and on the web is using the term "Pink Salt" in reference to cures or curing salts.

Instead, you should always specify exactly which type of cure is to be used. This is because both Cure #1 and Cure #2 can be tinted pink so they're not confused with regular salt.

To make it more confusing, there is also a Himalayan pink salt that has nothing to do with meat curing at all!
Last edited: Mar 15, 2014

When it comes to recipes and measuring salt, it's important to understand that salts are NOT created equal, nor do they weigh the same! That's why many die-hard sausage makers weigh their ingredients especially the salt.


Which Salt to use?

...it's a Kosher product with no additives! 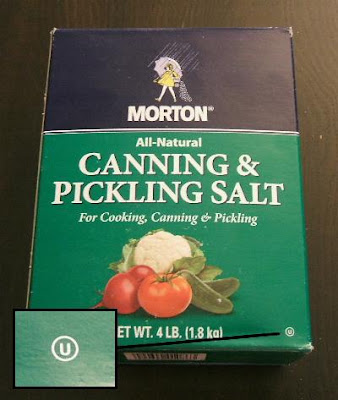 Great post...Marty you are correct...Actually in serious kitchens and baking it is by weight too...

Thanks for the helpful information.

For those without a scale, I have found when weighing salts, that for accurate measurements, look for a scale with 0.1 gram resolution. There is one available for under $20 that'll fit your shirt pocket that I recently purchased.

Very clear and informative post. I think I learn more on this forum than I do in the books that I buy. I think it is because the explanation of how to do things are in layman's terms were it's easy to understand. Some of the books I have bought are a little hard to understand. Thanks Cliff and Nepas for educating everyone on the techniques and steps of sausage making. I am definitely going to print these post out to use as a reference.

TrickyDick said:
For those without a scale, I have found when weighing salts, that for accurate measurements, look for a scale with 0.1 gram resolution.
Click to expand...

It's great for weighing meat and larger amounts of spices (which is fine for larger batches of sausage). But, for small quantities of spices, like you mentioned, the resolution needs to be down to 0.1 grams.

On to read the Kutas "bible" next. Gives some interesting information about botulism. First sign is blurred vision in less than a day.
Think I'm going to pick a fresh sausage recipe and tough it out on the KA mixer attachments this weekend if Mother's Day doesn't prevent me. I don't think I can pull off the, "I made these sausages especially for you on Mother's Day" ploy.

Looks real good Cliff.
Anytime you need some info or help just yell. One these days i will get another pellet grill.

You can count on it!
C

Sodium Nitrate is a powerful anti-microbal agent protecting not only against the botulism bacterium but also all other bacteria including e. coli and salmonella. I learned this during my research into making jerky, specifically the following link at the USDA - Jerky and Food Safety

Marinating meat doesn't make raw meat safe. "Marination alone did not result in significant reduction of the pathogen compared with whole beef slices that were not marinated," concluded the study.

In the jerky studies, some samples showed total bacterial destruction and other samples showed some bacterial survival — especially the jerky made with ground beef. Further experiments with lab-inoculated venison showed that pathogenic E. coli could survive drying times of up to 10 hours and temperatures of up to 145 °F.

A study by the Harrisons and Ruth Ann Rose, also with the University of Georgia, was published in the January 1998 Journal of Food Protection, Vol. 61, No. 1. The authors analyzed ground beef jerky made with a commercial beef jerky spice mixture with and without a curing mix containing salt and sodium nitrite.

They concluded, "For ground beef jerky prepared at home, safety concerns related to E. coli O157:H7 are minimized if the meat is precooked to 160 °F prior to drying."

What are the USDA Meat and Poultry Hotline's recommendations for making homemade jerky?
Research findings support what the Hotline has been recommending to callers. Additionally, safe handling and preparation methods must always be used, including:

Always wash hands thoroughly with soap and water before and after working with meat products.
Use clean equipment and utensils.
Keep meat and poultry refrigerated at 40 °F or slightly below; use or freeze ground beef and poultry within 2 days; whole red meats, within 3 to 5 days.
Defrost frozen meat in the refrigerator, not on the kitchen counter.
Marinate meat in the refrigerator. Don't save marinade to re-use. Marinades are used to tenderize and flavor the jerky before dehydrating it.
Steam or roast meat to 160 °F and poultry to 165 °F as measured with a food thermometer before dehydrating it.
Dry meats in a food dehydrator that has an adjustable temperature dial and will maintain a temperature of at least 130 to 140 °F throughout the drying process.
Click to expand...

The information here would equally apply to the general curing process, though of note relating specifically to refrigeration during curing is the fact that I've read that 38 degrees F is a better temp than 40 degrees. In any case, for general food safety your best results come from both using sodium nitrate and taking the meat up to 160.
Last edited: Jul 14, 2015

You are correct, Sodium Nitrite (different from nitrate) is a very powerful anti-microbial, BUT...

Sodium Nitrite, alone, has not really been shown to be consistently effective against, E.Coli or Salmonella. Even that article says, "...some samples showed total bacterial destruction and other samples showed some bacterial survival."

It is generally agreed upon that sodium nitrite is not considered effective for controlling gram-negative enteric pathogens such as Salmonella and Escherichia coli.

That's why the USDA (even in the above article) still recommends that ground meats, especially uncured ground meats, and poultry be cooked to 165°.


The reason CURED AND SMOKED meat/sausage are the exception, and can be considered fully cooked after it has reached internal temperatures ABOVE 150° (according to the USDA Meat Inspectors guidelines), is only PARTIALLY due to the Sodium Nitrite.

The idea is that:
1) The Sodium Nitrite takes care of the C. Botulinum,
2) The meats are hot-smoked at temperatures above 165°, which is hot enough to kill E. Coli and Salmonella in seconds,
3) Hot-Smoke temperatures take the meat's internal temperature above pasteurization temps (131°+) for a long enough period, that E. Coli and/or Salmonella are also destroyed.