Squirt is the Judge for this week! All entries win something!

Love it all and I want to cook like Deb.
B

This worked out great, was in a golf tourny today threw it on before I left and I was home before it needed to be pulled off!! Came out great, I did one before that was a bone in Butt and I thought that was a little better... Not sure if the bone had anything to do with that???

Cured an 8lb Pork Butt for the last 4 days in a brine solution..This is what it looked like when it came out..

Threw it on the Mak at 225 and then off to golf..The best wife ever took a couple of pics for me and then glazed it after about 4 hours or so with just a brown sugar and mustard glaze..

Pulled it at 157 and let it rest..Wrapped it up and brought it to the Folks house for dinner.

Sliced after about a half hr

A couple of Flank steaks

I ran it that way for about an hour, then moved them to the warming area and set the MAK to HIGH and put on the grill grates.

Seared each side for about 4 minutes, then rested.

Plated with pasta for the kids

Done up with some Little Louie's w/Pepper and some DSSR. Thrown on the grill on smoke for about 30 minutes to start with...

Cranked up to 350 until it was finished at 130*, then rested for about 10 minutes before slicing.

Tossed some asparagus in some EVOO along with Desert Gold and threw it on the grill for the last 10 minutes of the cook or so. Been out of town for a week and eating heavy so dinner was light last night. Hit the spot just right.

Plain and simple I love Ham... and yours sure looks good bflodan!
I

So here in Canada we are having a long weekend and I think there is a rule that you must drink beer and BBQ on a long weekend.
Solo this weekend the menu 2.6lb Tbone steak, Shrimp, Lobster, Stewed tomato's and beans, Potato's and onions in foil, and fresh market bread....
The Steak

The marinate is olive oil, pressed garlic, Lea&Perrins, Pete's Firehouse BBQ Rub. Mix all the ingredient in a boil.
Then I place the steak in a freezer bag and add the marinate, seal it up. I like to keep the steak in the mixture for the day.

Next is the shrimp in SOW BBQ marinate and soaking the skewers. Sorry no pics
So the the steak has been marinating for most of the day and the traeger has been cleaned so now its time to prep potato's, and beans.
Potato's in foil are simple and I am sure everyone does them, slice potato's thin, slice red onion thin, add Parmesan. Mix in boil and place on foil and add some butter then seal up.

Next 2 cans of and 1 can of stewed tomato's spicy style. Had to do them on the stove cause I ran out of room.

Well when you work this hard you have to take a break, so break it is....
Oysters with lemon and Tabasco of Franks and beer is like my most favorite sea food treat.

No rest, back to work the Traeger fired up and set to 225, the potato's on first to give then a head start and then the steak 1/2 hour later.
Just had to peek...

Flipped once and pulled at 140IT foiled and set aside while the SOW shrimp and lobster went on the Traeger.
Bumped temp up to 275

Finished in short order pulled and plated.
When I cut the steak I was a little disappointed, it seemed a little more done than I had expected. Hoping for a med rare but I think the time and foil brought it further than I expected, it looked like a lite med with nice color and tender to the cut. Plated up

This is the first steak I have done on the traeger, I will admit that I did not think that anything could beat the charcoal steak...
I stand corrected this was one of the best steaks I have ever had, the meat was tender and cut with a fork and lots of juice and flavor..
This was one of the best meals I have produced on the pellet grill and I have made some great ribs but this West Grey Tbone was the best.
Note for future pull sooner and don't let it set as long.
Last edited by a moderator: May 23, 2011

Due to popular demand (and a phone call from Big Poppa) here's the Stuffed Tomato recipe:

Cut the top 1/2 inch off your tomatoes, then carefully slice around the inside of the tomato with a small knife, and then using a spoon, dig out the insides but leaving 1/2" of tomato all the way around forming a little bowl. Discard the insides or use for another purpose. Turn your cored out tomatoes upside down onto a paper-towel covered plate and let drain.

To make the ratatouille, I put all the veggies in a gallon-sized Ziplock with some good quality salt (I like fluer de sel) and a couple of tablespoons olive oil. Now, smoke this mixture in one of those metal cooking baskets for ten to fifteen minutes. I had my smoker at 295 degrees for this. When the veggies begin to get soft, take off the heat and pour into a bowl. Spoon your balsamic vinegar over the top and mix with the mozzarella cheese. Now stuff your tomatoes and sprinkle Parmesan on top. I smoked them for about twenty minutes or so. I don't have a pic of the tomatoes as they were cooking and I've already posted these two, but here you go,

This morning I woke up wondering how a cast iron frying pan would fare in my smoker. A year ago I received it as a Christmas gift but never used it. Breakfast: After oiling and buttering the pan, I put it into the smoker to heat up. Then I cracked two eggs and let that cook until the egg whites started firming up. Now I added slices of Heirloom tomatoes (I grow these) and some fresh ground pepper and Little Louie's.

when the eggs were almost done, some grated sharp cheddar was added, together with a bit of cooked bacon and buttered sourdough toast. Cook for five more minutes. Why this dish tastes SO MUCH BETTER than cooking it in the kitchen I may never get but boy, does it. I wanted to eat it right out of the pan!

Big Poppa said:
Now we are going to find out if judging is harder than cooking 100 lbs of butts.
Click to expand...

Here goes. (you have no idea how hard it is to look at these pictures before I've had a proper breakfast..)

SisInLaw 'dives right in' and nails a prime rib while giving up her stuffed tomato secret.

ITFD#15 gastronomic holiday weekend feast. Steak, shrimp, lobster, potatoes, all off of the smoker an onto his plate. 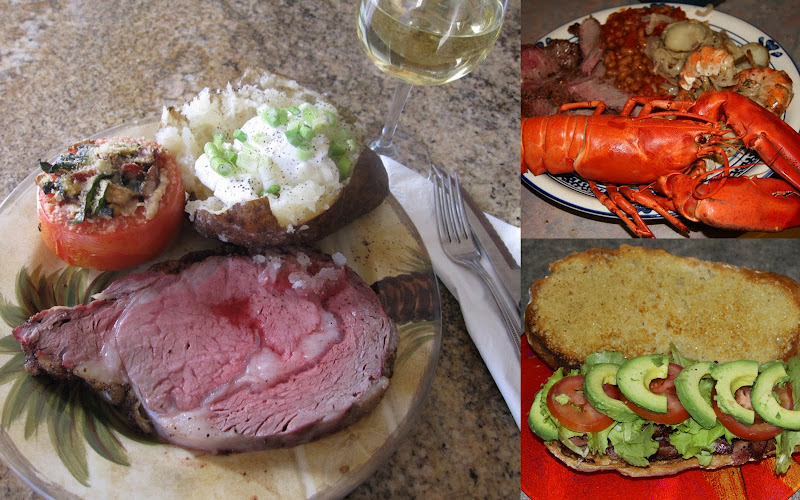 And on that note, now I need to go wait for the office cafeteria to open..

Congrats to the winners some very fine tasty looking food.
B

Congrats winners and everyone.

Congrats to Sis and ITFD! Thanks Squirt, looking at all those entries before breakfast...that's tough brother! Another week of great ideas, thanks for the sandbox BP!

Very happy for all the winners and all the entrants....I want some of Dans ham!

Sis you get to be the judge for this coming weekend...a holiday one.....Im going to raise the ante this weekend to really get some entries!

Squirt that tomato of sis really put it over the top I would guess...I know that I am always looking for new side dish and veggie ideas.

This is amazing. How did I win over the incredible feasts presented? Thanks thanks thanks! Me thinks a little bit of encouraging the noob is going on here, but I'll be gracious and say YAY!

SisInLaw, you said, "No way can I compete... ". Well you didn't. Instead you jumped on this thing and nailed it! That Stuffed tomato is a work of art.

It just goes to show, like Rip has said in the past, if you're cooking anyway, entering for a chance to win is just icing on the cake!


Congrats to all, and thanks BP for the contest!

Great cooks by everyone! Congrats to all the winners you guys earned it this week.

My son is not a huge tomato fan but is talking about making SIL's stuffed tomatoes.