THis weeks challenge for a whopping $10 gift certificate

Pete said:
Those are some great eats!

Deb, we can't get Fat Tire this far North East.

Before 2006, New Belgium distributed in only 15 states (Washington, Oregon, Idaho, Montana, Nevada, California, Arizona, New Mexico, North Carolina, Wyoming, Nebraska, Kansas, Texas, Arkansas, Missouri, Colorado). New Belgium expanded operations in 2002 to be able to distribute to California. In spring 2006, the brewery began to distribute some of their beers in other markets. Bottles of Fat Tire distributed in Chicago claim "Chicago Inaugural: The 1st Fat Tire Ale served (legally) in the second city." In June 2007 Fat Tire, Skinny Dip, 1554 and Mothership Wit became available in Illinois. By the summer of 2007, New Belgium expanded distribution again to include select areas of the Minneapolis-St. Paul Minnesota metro area and Iowa. As of July 2008, Fat Tire, 1554, Mothership Wit, and seasonal brews are also served in Tennessee. In March 2009, these beers also became available in North Carolina.[3]. In April 2009, in response to huge demand, Fat Tire became available in Indiana[4]. In May 2009 Fat Tire became available in Georgia, South Carolina, South Dakota and Wisconsin.
Click to expand...

I wish I had read that before I spent so much time in the liquor stores Oh well.... Thank Pete! I won't look any more

Please hold off judging until I get my pics in. It will be late after the game.

Sparky What we do is judge on Monday morning...give everyone a chance to get their stuff posted

I'll be posting soon too!

I too looked for Fat Tire around here, and boy did I get some strange looks! Based on Pete's post (thanks Pete), I guess there's none in Ohio.


Sparky, I know its a lot to ask, but can you somehow find it in yourself to drink one for me?

Well I'm on my 4th margarita. Steaks were out of this world. Very rich and filling.

This weekend was a busy one for me. I made 4 lbs.of 'Maple Glazed Apple Wood Smoked Bacon' & 5 1/2 lbs. mini-Kielbasas for a Sunday Brunch we had this morning at church.

I just recently learned to make Kielbasa & since I can't eat the "lil' Smokies" I wanted to try making my own mini Kielbasa sausages. I called them Basi-Babies.

Here are the Basi-Babies hot off the smoker & ready to Eat! 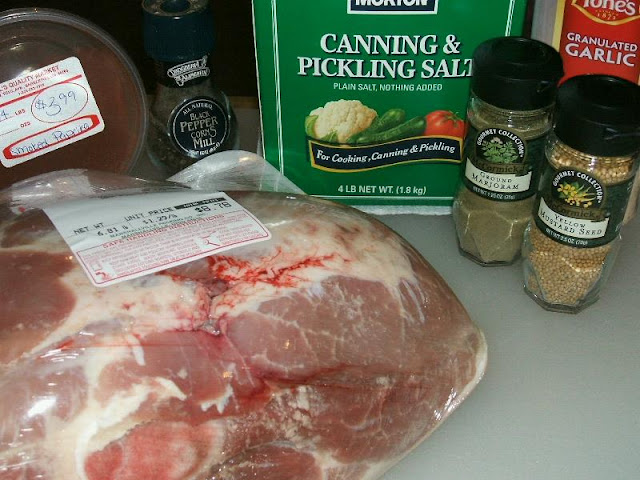 Sunday morning, 6:a.m.- Time to roll out of bed to go fire up the smoker.

This is an uncured sausage (no nitrite), so it was Hot-Smoked (NOT cold smoked) at about 250° for 1 hour 20 min using hickory for smoke. To keep them from steaming, before smoking them, I pricked two holes in each sausage using a small sterilized nail. 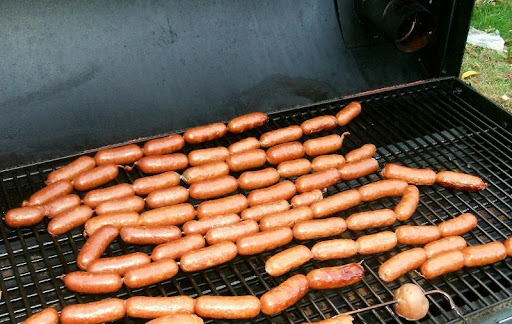 They had a nice pink color from the smoke ring that went all way through and the natural casings gave them a great 'snap'! 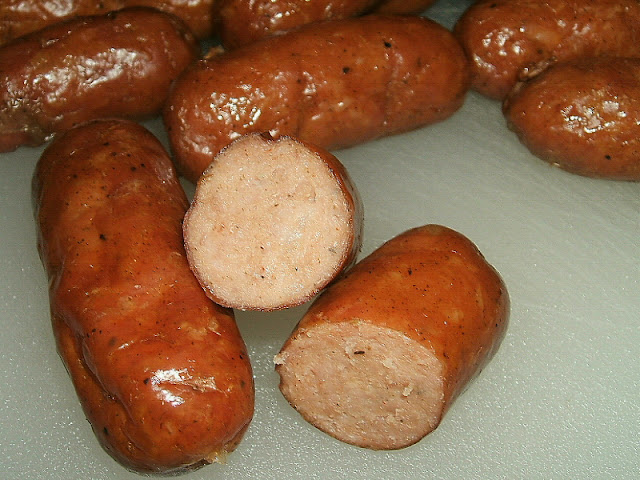 I was very happy with the results; Now I'll have to make for some ABT's!

Start out with some nice large cuts.

Then prepare the crab stuffing.

Next, I prepared the creamed bourbon peppercorn sauce.

Start with a pan of beef broth. Add lots of crushed peppercorns, a sliced mushrooms. Let simmer and reduce. Add a few shots of your favorite bourbon and simmer to reduce some more. I then added an onion-horseradish sauce, a little more bourbon and reduced again.

Had a pint of heavy cream, stir and simmer until creamy.

To form the pocket for the crab, just make a nice slit in the side and stuff the crab mixture inside.

Pour a laddle full of the cream sauce over the tenderloin prior to serving.

Tenderloin Stuffed with Crab and topped with a Creamed Bourbon Peppercorn Sauce.
Add a loaded baked potato and a nice tossed salad, a some crescent rolls and a few margaritas to wash it down with.

Now if the Rangers and Cowboys could only look this good.

TentHunter - what size casings did you use?

It was my Sister In-law's birthday, and she wanted drunk chicken. I did a turkey breast too.

Turkey was covered in mayo and Hasty Bake Greek.

Chickens got mayo and Plowboys Yardbird.

Here is a pic of the turkey breast and one of the chicken rockets.

Finished turkey, just before I took it off.

The chickens, ready to come off of the grill.

Great Job all of you. Mike you managed to get the same model?

The sheep casings I got were from a butcher shop & in unmarked pouches for their use, and I didn't think to ask the lady what size they were (duhhh). As far as I can tell they're in the 20 - 22 mm size.

After a bad experience with one of those smaller, cheaper "Home Packs" she talked me into getting a whole hank of what they use. Wow, what a huge difference in quality!

Big Poppa said:
Great Job. Mike you managed to get the same model?
Click to expand...

Hoping the model might sway the jury a little.

wow. all the food looked fantastic. great job by everyone. really like the stuffed steak, brisket and drunken chicken. but, the person who won went to alot of trouble trying to find fat tire and then cook a second meal since i said no butt. this weeks winner is DEB. my favorite meal in the whole world is steak and eggs and your steak was cooked perfect for me. nicely done deb. big poppa please give deb this weeks gift certificate for a great looking steak.