This weeks contest is Chili Head...bring it on and extra points for peppers!

We know Chili Head lives up to his name! He is the judge...Im sure that Jalapenos or Habanero will get more votes.....it's a holiday weekend so Im doubling it again! Don tet my wife Little Louie know...(unless you use the credit to buy her seasonings!)

all other baby poo bahs $10 store credit to BPS

Holiday weekend. I have to work on monday. (double time). need to get more FT.

Aight everyone show us some fantastic food!

I started by mixing up a little marinade of Balsamic vinegar, brown sugar, ground black pepper and garlic and put the flat iron and marinade in a plastic bag and into the fridge for about an hour while I untied the grill where it was secured from hurricane Irene and cleaned out the Weber.

After I pulled the meat from the marinade I smeared it with some Annie’s Garlic evoo and dusted it with BP’s Double Secret Steak Rub and put it on the Weber with some black walnut pellets. I pulled the steak at 140 and rested it.

Although the steak was a tad over done for my taste and cooked a little unevenly, it was tasty and tender. This was only the second time I’ve had a flat iron steak and I will definitely try it again.

I think the meat is the culprit....

When is the cut-off for this one? Sunday like usual or are we going until Monday since its a holiday weekend?

I usually do baby backs, my family prefers them over spare ribs. Spare ribs were on sale, so I decided to take a crack at the St Louis cut. My trimming skills need a little work, but practice still tastes great!

I mopped them a couple of times with rice wine vinegar.

After a few hours I gave them some Foil Love.

I decided to reduce the foil love drippings into a sauce:

I boiled it down until it was half the original volume, about 20 minutes.

I have noticed with the foil love you need to go a little heavier on the rub, it tends to wash off a little.

These were good. The Kona rub is definitely not sweet, but the brown sugar in the FL brought some subtle sweetness to the party.

The Cajun rub on the tips was an experiment that turned out great, I'll be using that as the rib rub next time.

Lots of smoking yesterday. We've got to do some cleanup at MIL's house today, and I'll probably work on Monday. 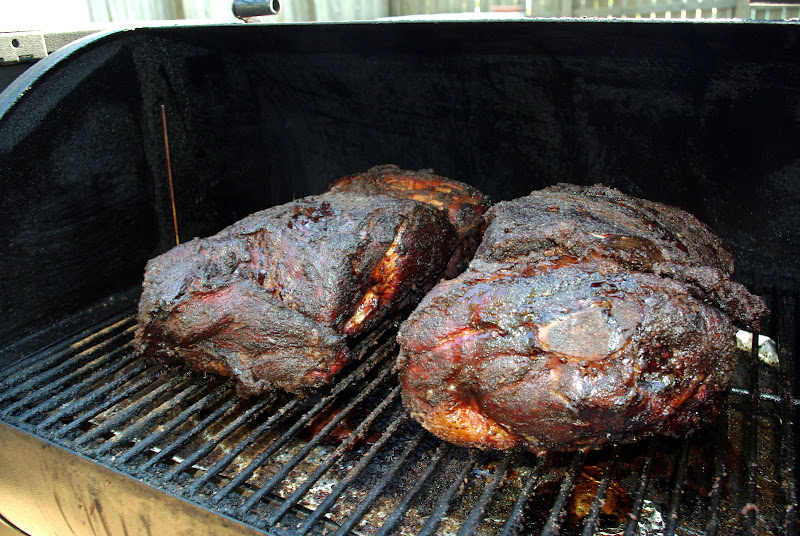 Meanwhile, I put together my new drip pan assembly for the MAK. 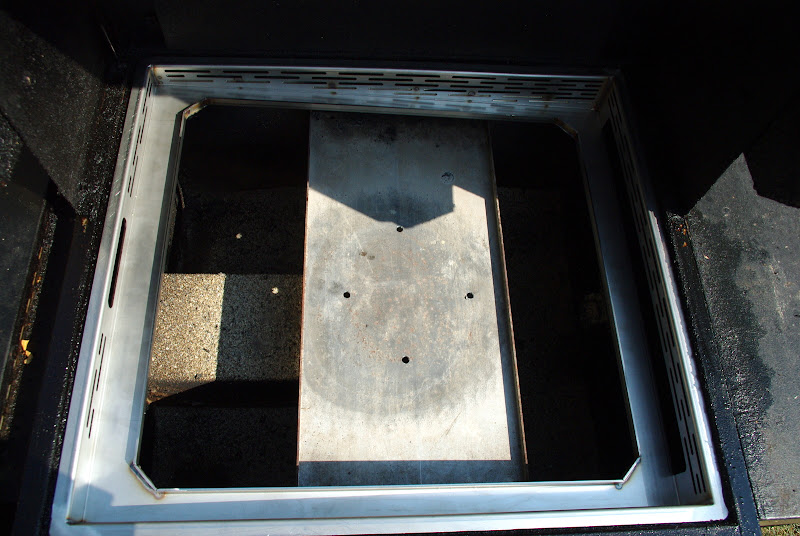 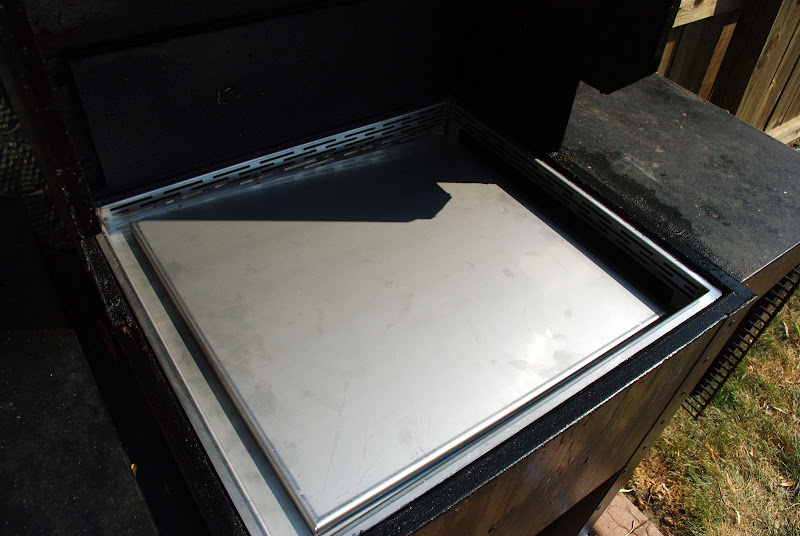 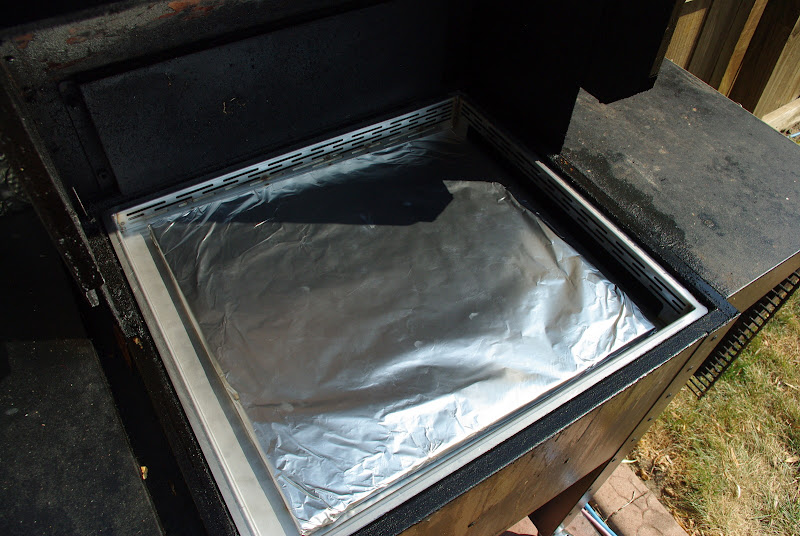 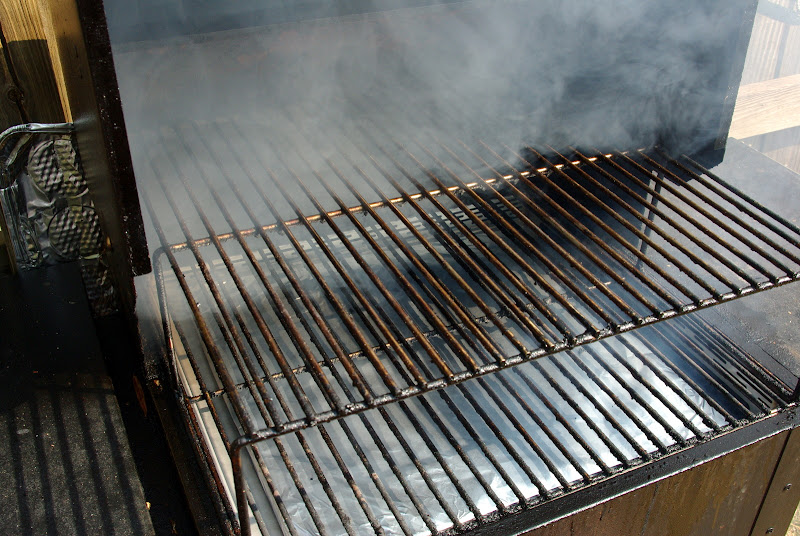 Spares were on sale this week, so I picked up 2 biggies. 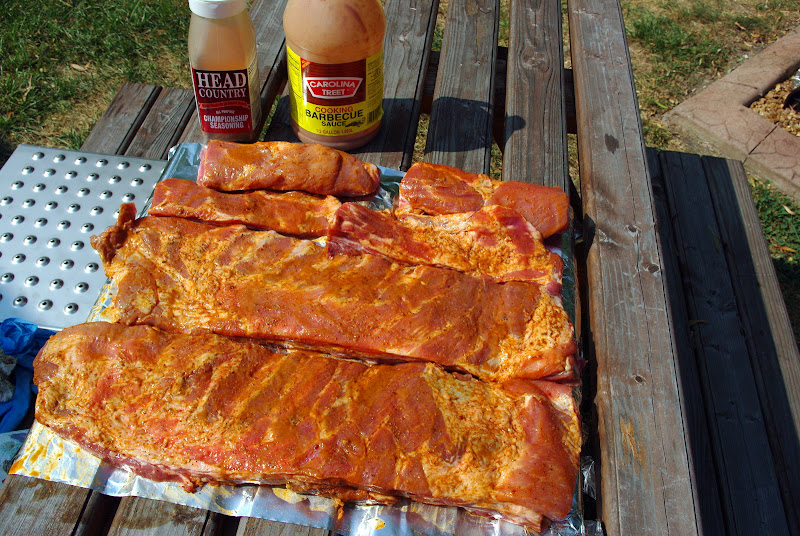 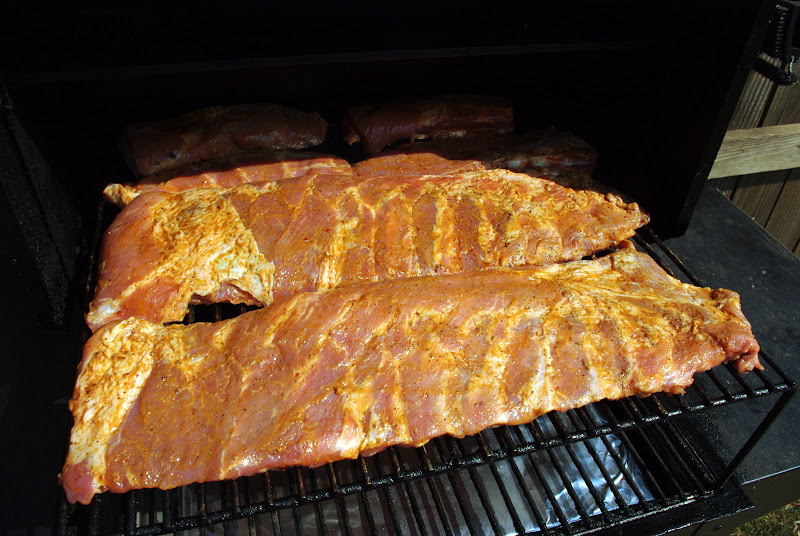 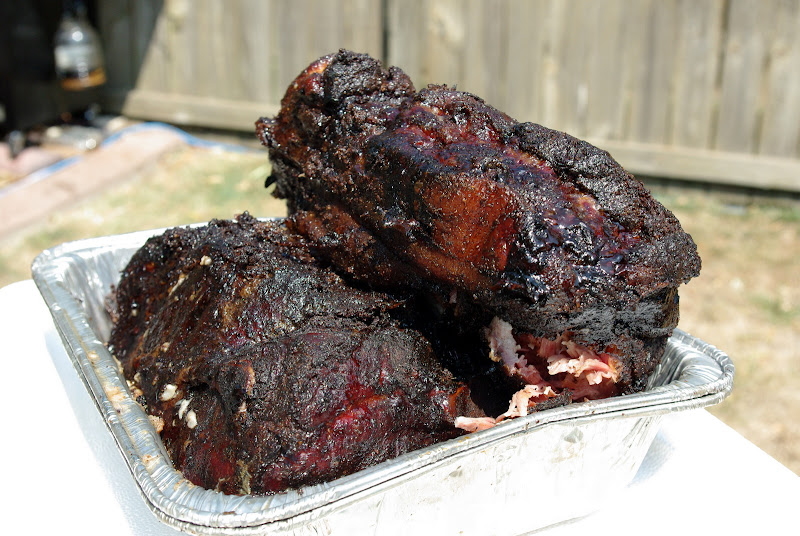 ISEEMORENUTS (Blazin' Pistachios) in my future... 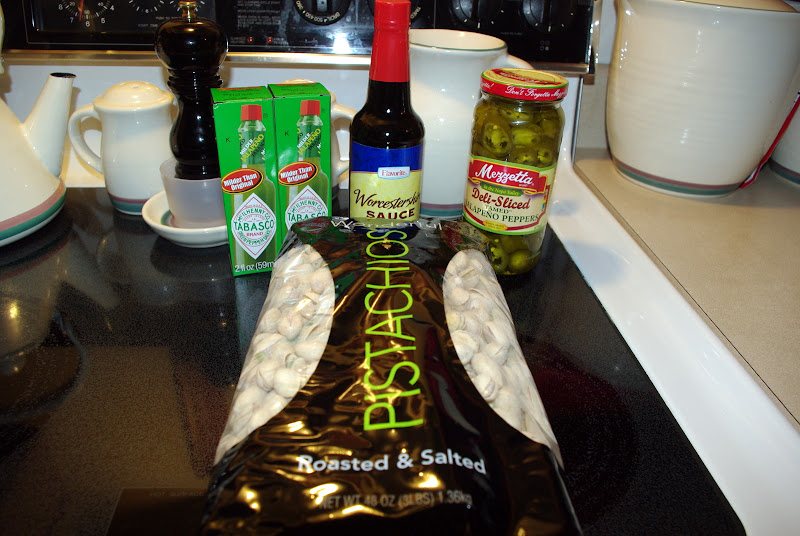 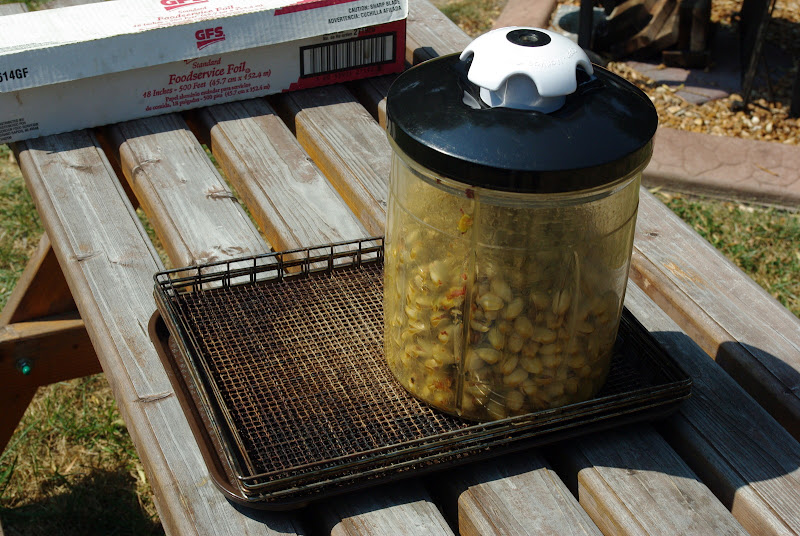 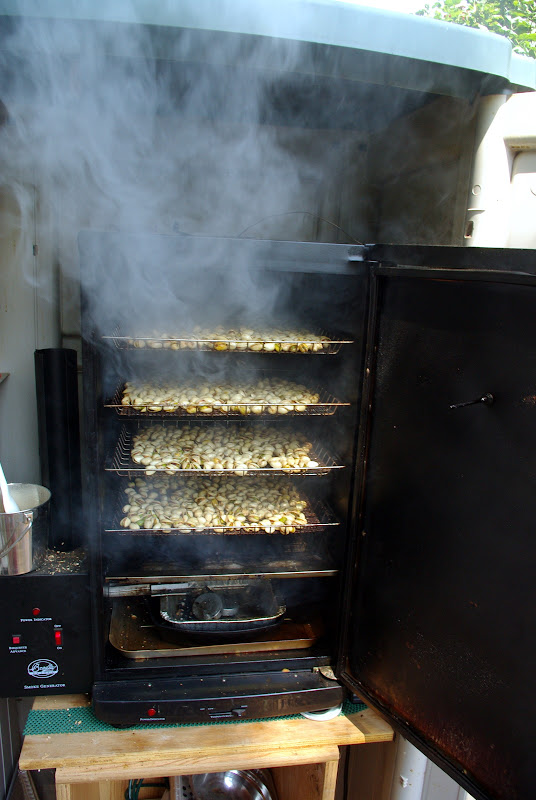 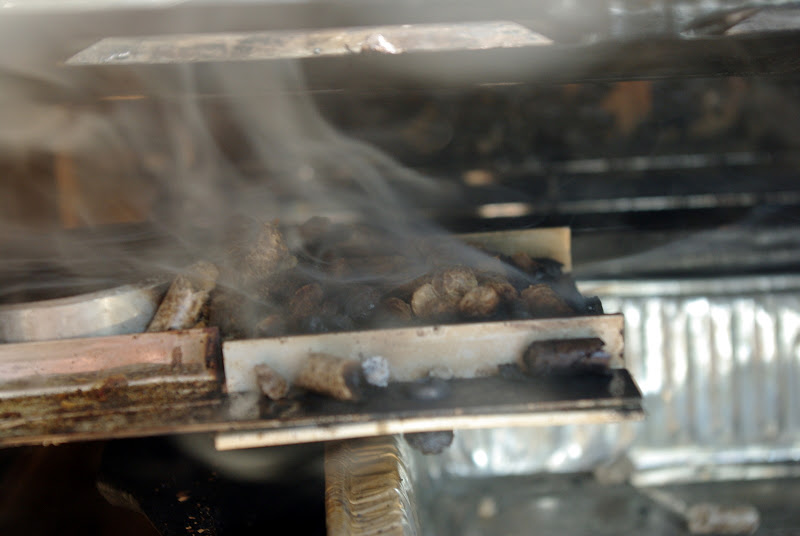 Ribs are coming along quickly. 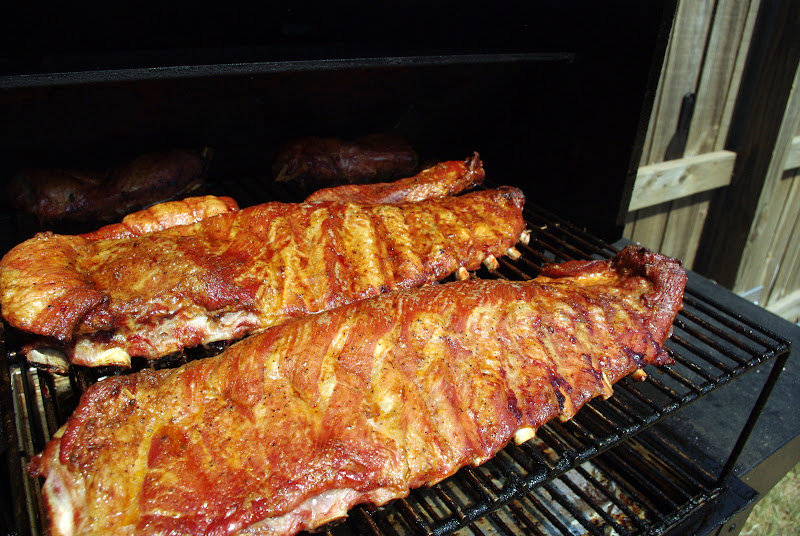 Traeger is still hot, so I dug a couple frozen chickens out of the deep freeze. Toss them in and dumped some CT on. 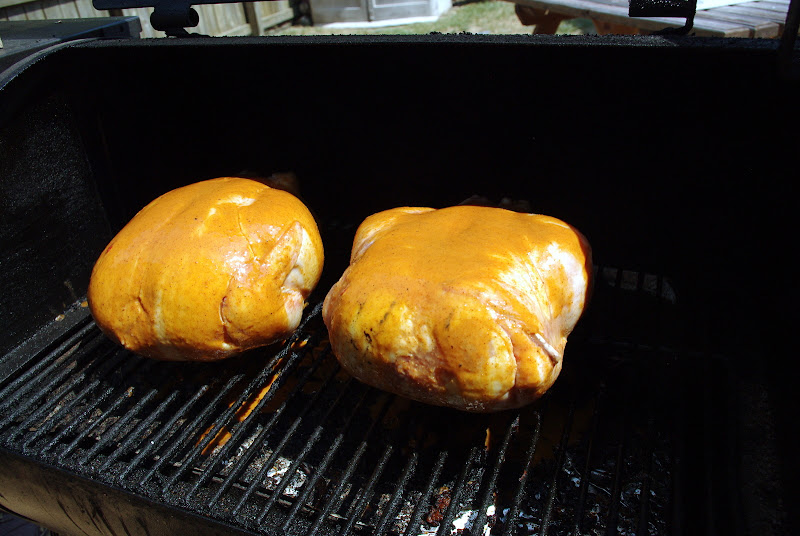 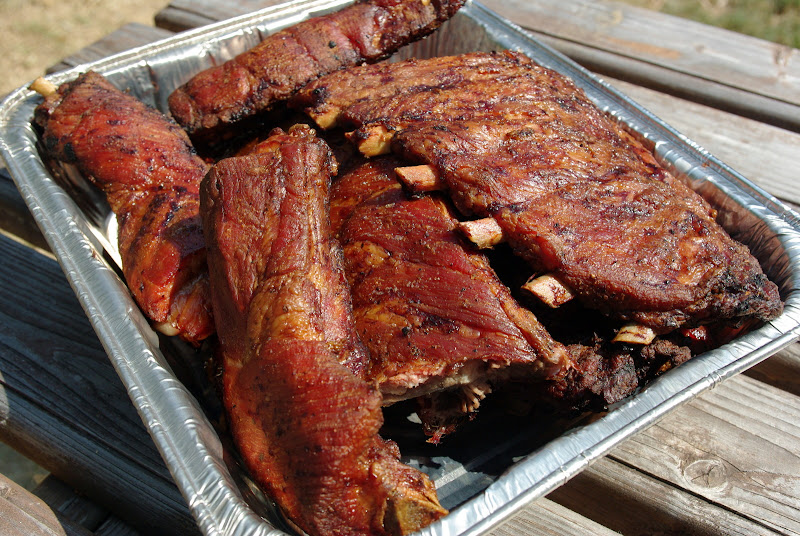 They are foiled and parked in the microwave for now. They are for next weekend, so I'll vacuum seal them after they cool off tonight.

The Auber doing it's thing. 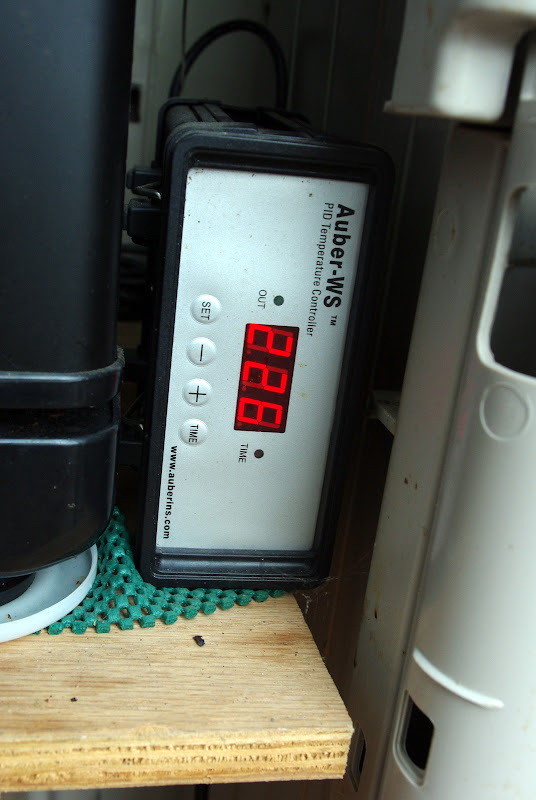 Lots of smoke from those pellets. 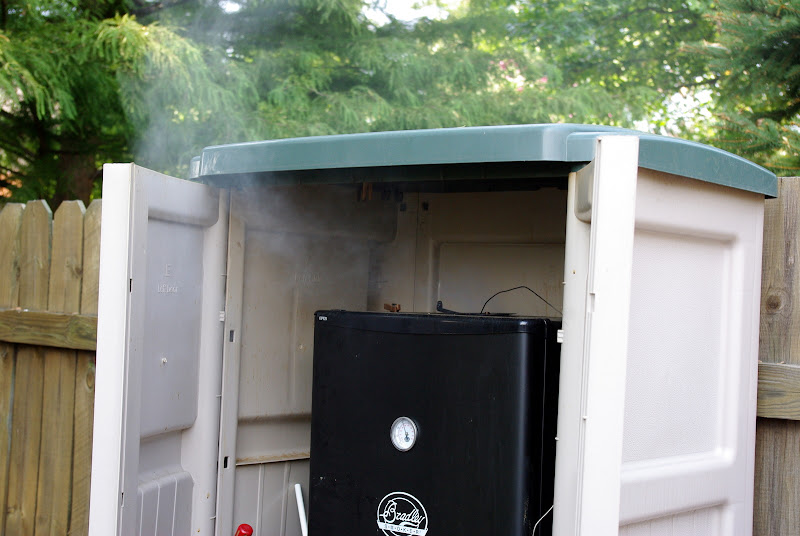 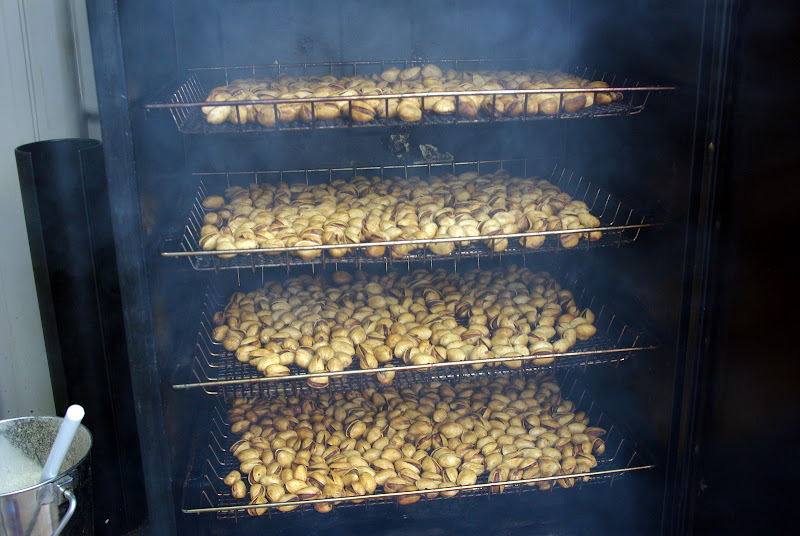 Pistachios are looking good. Flipped/rotated them for the last time, and turned the Auber down to 200 for the final drying time. 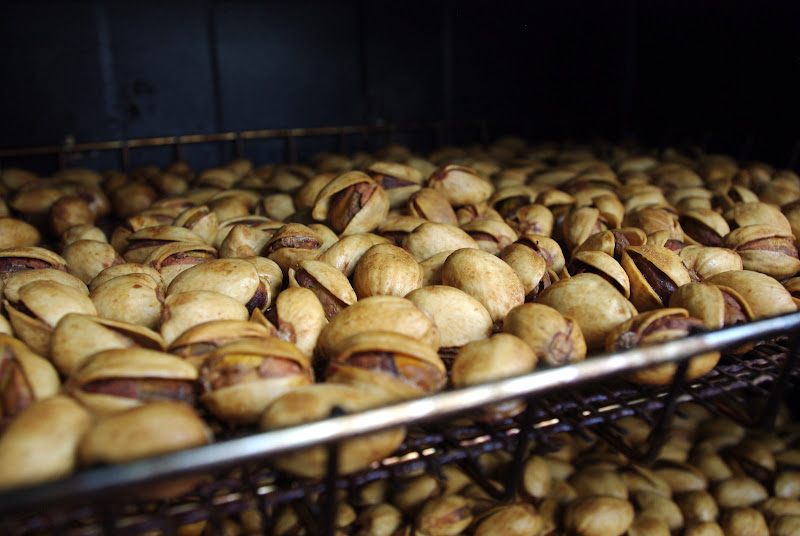 Pistachios are done... Racked up in the kitchen cooling off. 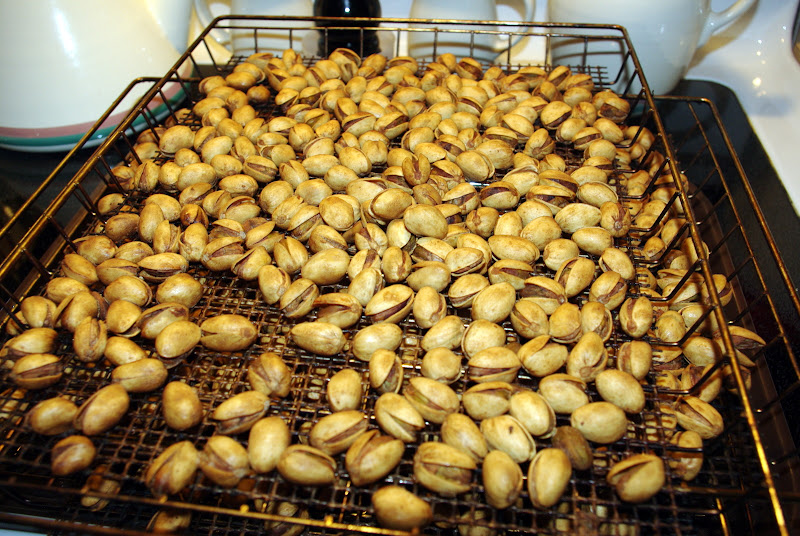 Hopefully the Hickory smell dissipates before MrsSTC gets home later this evening.

I"ll put them in some kind of container when I get home from church. Then I have pork to pull. Chicken is still half frozen on the Traeger, so I'll bump it down to 300° and let it ride. 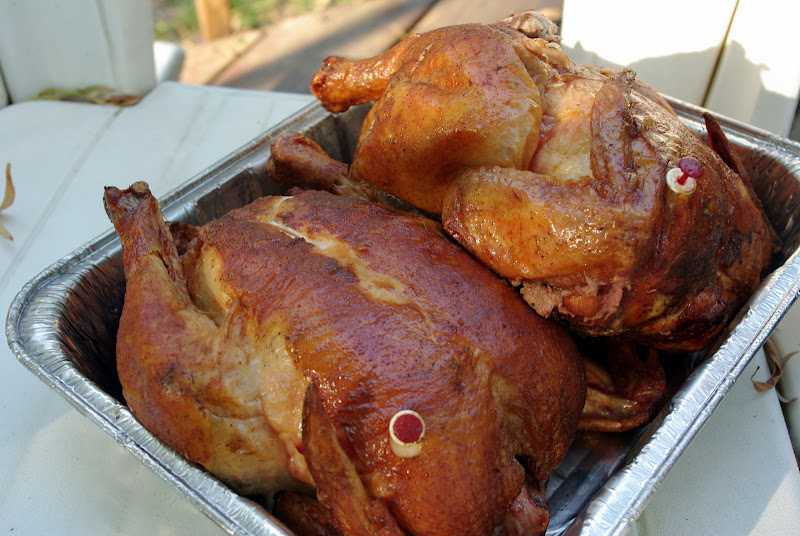 Pork is pulled, and everything is tucked in the fridge. (most of this is for next weekend - we have family coming from Puyallup, WA to visit) 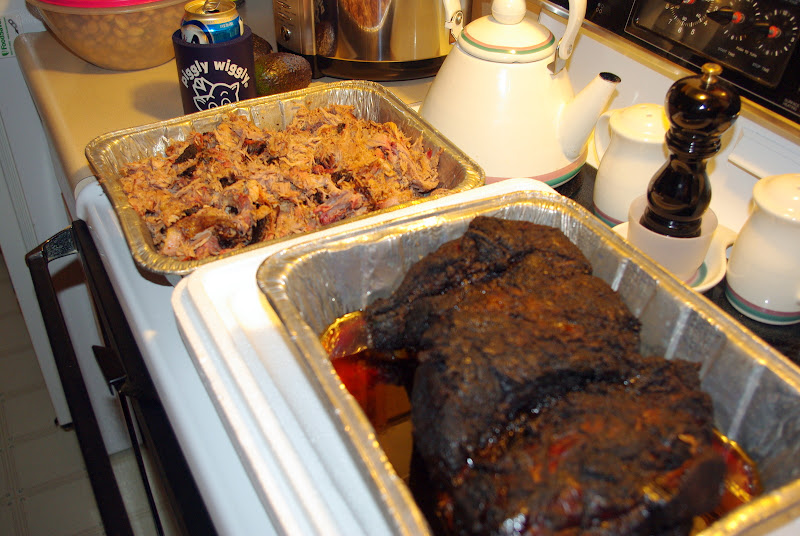 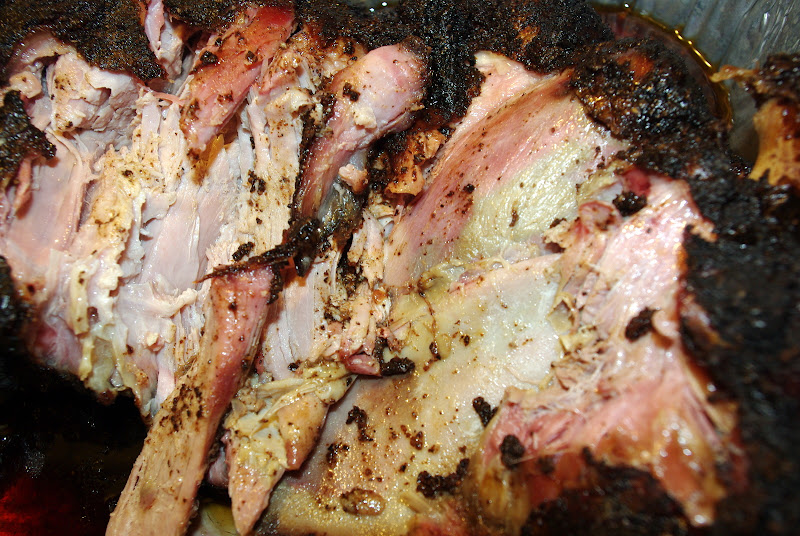 I"ll have a vacuum sealer party tomorrow AM.

We had chicken soft tacos for dinner... No pictures, didn't happen.

Sunday Brunch on the MAK for Labor Day Weekend

Don't know if I'll get to do another cook before the contest ends, so here's my entry.

I was sort of inspired by the Full English Breakfast, but I didn't have all the stuff like black and white pudding, back bacon, etc. I just decided to use the sausage and bacon that I did have.

Got everything together and chopped for my mise en place, seasoned tomatoes with freshly ground salt and pepper.

Preheated MAK to 400F and brought it back down to 340F or so to keep from burning my butter too badly. Onions and butter (We call that Polish salt and pepper in this household) on the griddle at at 340F. Sweated the onions. Then, it was time for the sweet potatoes for the hash. Bacon on the Frogmat.

Eggs on to the grill after I was done with the hash. Forgot my sausage, so I threw it on there at that time, which worked out well.

After the eggs were done, moved the sausage to the griddle for some direct heat. Turns out that it was a great thing to do the sausage last, because it picked up the flavors from the butter, salt, pepper, onion that must have been on the griddle. MAK back to 400F.

Then, boom! Not-so-English Breakfast on the MAK.

Goose, the cat, was really into it. He wouldn't leave us alone!

that bradley looks well seasoned. it that a single probe uber thing? like your set up.

found some fish in the freezer. ok, fish for dinner it is. i have a friend who fishes alot. i give him ribs and he gives me fish. i like the barter system.

to the moon alice.

found this two big pieces of tuna in the freezer. i defrosted them and put in ziploc w/ SOW's. let sit for over 4 hours in frig.

Relatives came over today, perfect time for mixing in some new things in with tried and true.

First up, ribs four ways. All 6 racks start of with EVOO, Plowboys, cayenne/habanero powder and on to the MAK at 225 for 30 mins then up to 275 for a little less than two hours. These are just about ready for FL. Four with butter and brown sugar and two with homemade hot wing sauce.

This one just came out of FL, mmmmm, I think it will get JD sauce. While the ribs were cooking I prepped three experiments. These were inspired by posts from Cowgirl, Chili, Spinny, and others. First up was a pulled pork roll. The filling was shredded cabbage, carrots, pulled pork, and lime juice.

This mix was rolled up in pie dough and onto the MAK at 400 until brown. These turned out really well (had a little trouble with them sticking to the frog mats) and the only thing missing was a good sweet and sour sauce.

Next I cooked up some jalapeno's, onions, and garlic and mixed in with the pulled pork and two different cheeses.

I then placed pie shells in a muffin pan. Six of these were filled with the pulled pork mixture, the other 6 would be dessert. Three shells were dusted with brown sugar and the other three with a brown sugar, cayenne/habanero powder mix. Then they were filled with cherry pie filling and a chocolate truffle placed in the center of each. All twelve were then covered with crust and baked in the MAK at 400.

I was really pleased with how well the pulled pork pie turned out.

However, the mini cherry pies were the stars of the experiments, even the hot pepper ones were a big hit!

If the contest is going through tomorrow, then I'll be posting our Labor Day cook tomorrow night, but for now...

After Big Poppa's post on "To Sear or Not to Sear" and seeing as how our local grocer has been carrying tri-Tips this year for the big cookout Holidays...

...I jumped at the chance to give BP's method a try, and I was NOT disappointed!


It got a light coating of Little Louie's and was put on the Stoven at the lowest setting to soak up a little smoky love from the Oak/Black Walnut blend. 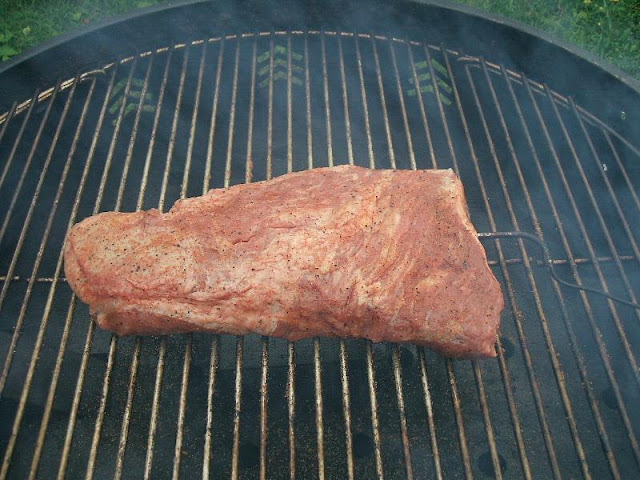 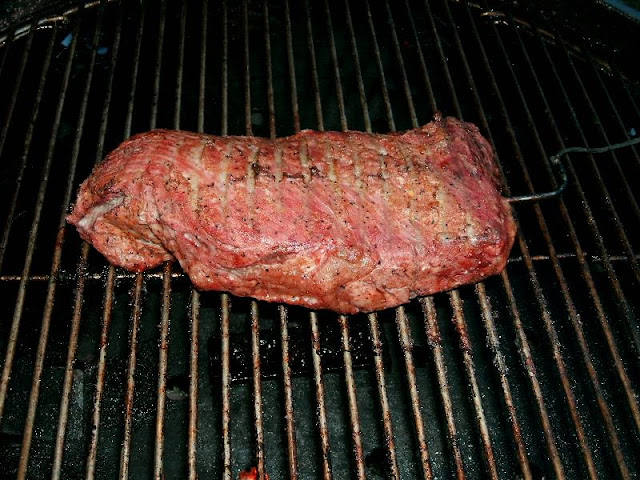 When I trimmed it into thick cut slices it was a perfect medium just the way we like with the end portions pushing more of a medium well. YUM! 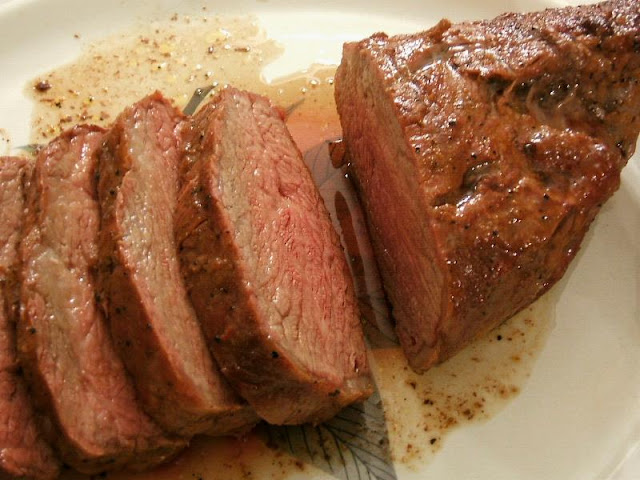 Nice and juicy too! 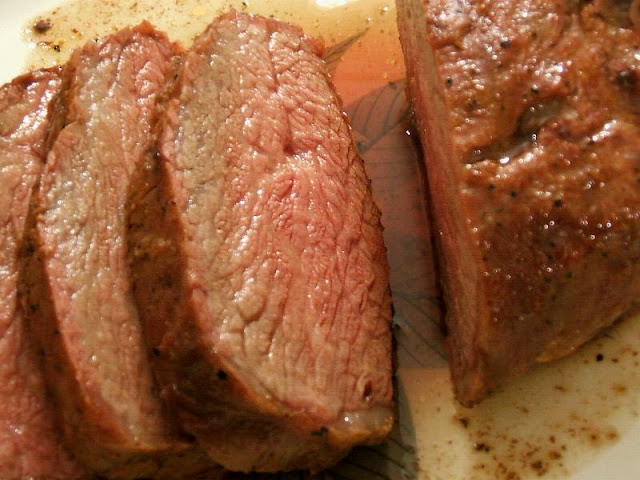 This was for my Wife's Birthday dinner and she loved it, as did the rest of us!

Getting a lil' foil luvin'

Look at the shiny glaze on those baby backs!
B

I got myself a new pizza toy!!

Decided to make some Thin Crust Wood Fired and some Chicago Cast Iron Deep Dish. Never used a Cast Iron for a pizza...Thought it would be a good idea!! Started with the Deep Dish because of the longer cooking time..... Fired the MAK to 425 and then built the pizzas...Used pretty basic toppings.... The sauce I used whole San Marzano Tomatoes and seasoned them up then a few pulses in the food processor..

While those where on, I laid my charcoal and preheated the Weber.. It says to add a whole log but I didnt have one...Just added some large chunks of Hickory and a pouch of BBQD Hickory Pellets..