Bflodan at the wheel for this weeks contest! Everybody enter and soak me

Had a little free time and my daughters were bugging me to make hot wings (in the deep fryer). I've been meaning to try smoking hot wings for a while now, so time to have a little shootout.

I deep fried 40 chicken wings and sauced them with by Buffalo style hot wing sauce.

At the same time I smoked some of the wings on the MAK. These were first marinated in EVOO, Desert Gold, Little Louies, and a dusting of cayenne/habenero powder.

Once the wings were about done, they were seared a bit over the searing zone.

Also cooked a whole chicken for the few folks coming that don't like hot wings (ok, just my son).

Here's the contenders, smoked in the corners, and fried in the middle. All were dipped in the hot wing sauce.

And the winner of the head to head taste test is.....Smoked hot wings, 5 to 3. Folks liked the smoked ones so much, when we ran out of wings they had me sauce the ones from the whole chicken and ate them too!

Now the bad news, the three fried votes were my wife and two daughters....sigh.

Wow, I don't envy Dan; He has his work cut out judging this week!

How about another easy but delicious side dish that takes advantage of all the garden fresh zucchini that's available this time of year?

The zucchini was washed & cut into wedges, then wrapped with a 1/2 strip of bacon. Sprinkle on a Little seasoning and they're ready for the grill. 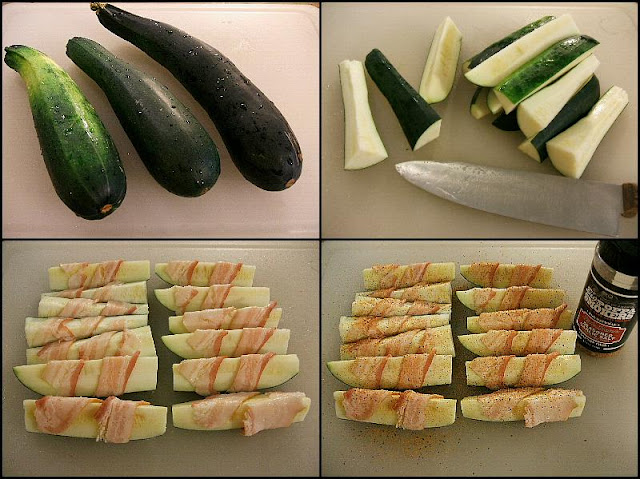 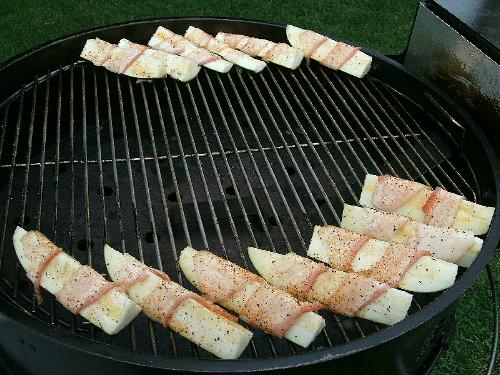 Brush on a light coating of equal parts melted butter & Italian dressing to finish. The acid & butter balance each other nicely.

They turned out nice & tender with the crispy bacon. 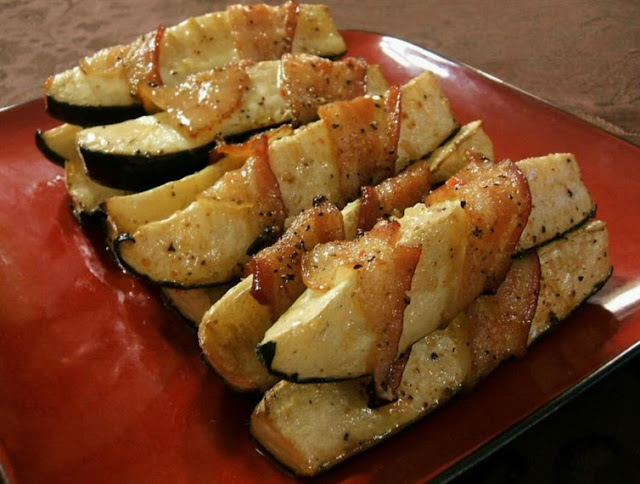 Lots of tomatoes and not a lot of time today = BLT's

Smoked a pound of bacon and toasted some onion rolls, added mayo and fresh tomato.

Next was romaine and avacado slices.

But wait, there's more....found this at the store today and couldn't resist.

Made of crust of graham crackers, sugar, and butter...press into the pie plate and smoked at 375 until brown, about 20 minutes. After baking, the aroma of this simple crust is fantastic. Such smokey goodness!

After the crust has cooled, add the filling (1 cup key lime juice, 28oz condensed milk, 2 eggs, whisked together) and back on the MAK at 325 for 15 minutes. Then cool two hours in the fridge.

One of our closest friends can't eat meat so I am always looking for good meatless entrees to try on the grill. I found this one at amazingribs.com and decided to give it a try-

Started with a couple of eggplants and a nice Portabella

took some of the skin off the eggplant, just leaving enough for some flavor

Tossed everything in a bowl with some Olive oil, salt, and pepper

Onto the MAK flame zone running at 375

Grilled until just starting to soften up

Time for assembly, took the grilled eggplant and portabella and placed in the bottom of a glass baking dish

Top with fresh basil and oregano 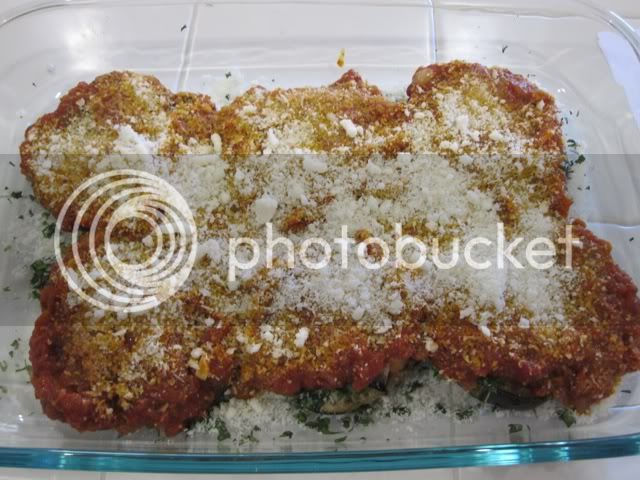 After about 20 Minutes pulled off when the cheese is melted

This came out awesome! So much tastier and lighter than the deep fried version, you can actually taste the eggplant. The key to this recipe is making sure everything is fresh. A wonderful meatless dinner that everyone loved!

Wow.. these are some amazing cooks this week!
B

Wow!!! What a tough week I ended up with!!! I think I counted 16 cooks this week... I really think that all 16 are top 3 worthy if not winners and that makes it really difficult to judge...Although Id like to choose them all here are my top 3...

3rd: Spinny
Leftover Pulled Pork Pizza
I thought this looked so good...Ive been tossing that idea around in my head for awhile but have yet to try it..Now Im going to have to, I just hope I get the same results as you...Great cook!!

2nd: SmokerJoe
Brisket, Burnt Ends, Pulled Pork ABT's
What an amount of work you put into this one!! I love Burnt Ends and that Brisket and ABT's looked out of this world...Very Nice!!

1st: Kevin
Beef Wellingtons
You made one of my all time favorite meals and it looked fantastic...I had you pegged as my winner from the moment I saw your entry!! If you keep putting out entries like that I think you will have alot of winners!! Great work Kevin!! Keep it up..

Congrats to all for a great week and thanks again BP for making this happen!!

Awesome week! Wellingtons Arsenault are on my short list now...

Congrats to Kevin, SmokerJoe, Spinny, and the other 13 winners! Great job Dan, tough week. Thanks BP!

I think that the list of things to try has doubled this week... I really liked the look of the beef basketball and then apple upside down pie... incredible!

Congrats to Kevin, SmokerJoe and Spinny!

I feel the need to comment on BP's contests. I don't compete unless I have something that is a little different, and IMHO, might have a chance to at least place. I follow the contest religiously. The entries are amazing. The ideas that come out of the entrants is equally amazing. Big Poppa has the easiest job in getting each contest started. The weekly judge really has his/her work cut out for them trying to decide who should be the winner.

I'd like to pose a question to everyone. In order for the judges to be able to "compare apples-to-apples" in a contest (with the goal of making their job somewhat easier, should a "theme/meat/vegetable/dessert" be specified foir each contest? Just a thought. This could be something on a separate post, I'm sure.

I will say one thing, I am constantly on the lookout for something to cook that really makes a statement. I really want to compete.

That's my boy! He kicked me out of the kitchen/deck unless he needed pictures taken. Congrats SmokerJoe & Spinny.... we will be doing pulled pork pizza soon.
S

This was truly a great week of cooks! Congrats to all the winners. Kevin, you did a wonderful job. Now, if I can just get me a pulled pork pizza and some Key Lime pie.......

Thank you everyone!
I can't wait to see what everyone cooks next week.

got any favorite foods kevin? lol..... how do you like ribs? lol.

sparky said:
got any favorite foods kevin? lol..... how do you like ribs? lol.
Click to expand...

Congrats to all! Another off the hook week.

Art you're question touches on exactly why this is so hard to judge. How can you compare fabulous ribs to a perfectly cooked chicken to a great fruit cobbler, etc. But that's also part of what makes this so interesting week after week. This contest just never seems to get old.

A themed contest might be fun too though.
K

@Sparky
My favorite kinds of food are the edible kind.