This is my second Brisket. I was very happy with the results last year but delighted with my cooking technique. Last summer I put it on the top rack over a giant water pan. It took over 18 hours to finish. Since then I've taken to using a small water pan and using the lower rack when possible. This made a big difference; I put it on at 6:15 PM Saturday night; at 6:20 AM Sunday it hit 180* internal temperature. At that point I put it in a disposable aluminum roasting pan, pour a bottle of Session beer, and seal it tight with aluminum foil until it hits 195* which it did at 8:00 AM. Next time I'll start around midnight.

Brisket can be great or terrible and not too much in between. I think the biggest key to success is the quality of the meat. i headed over to Gartner's Meats where I picked up a 14+ pound brisket. If you live in the Portland area and aren't a vegetarian, you should go to Gartner's. It's about 20 miles from my house but well worth the trip. 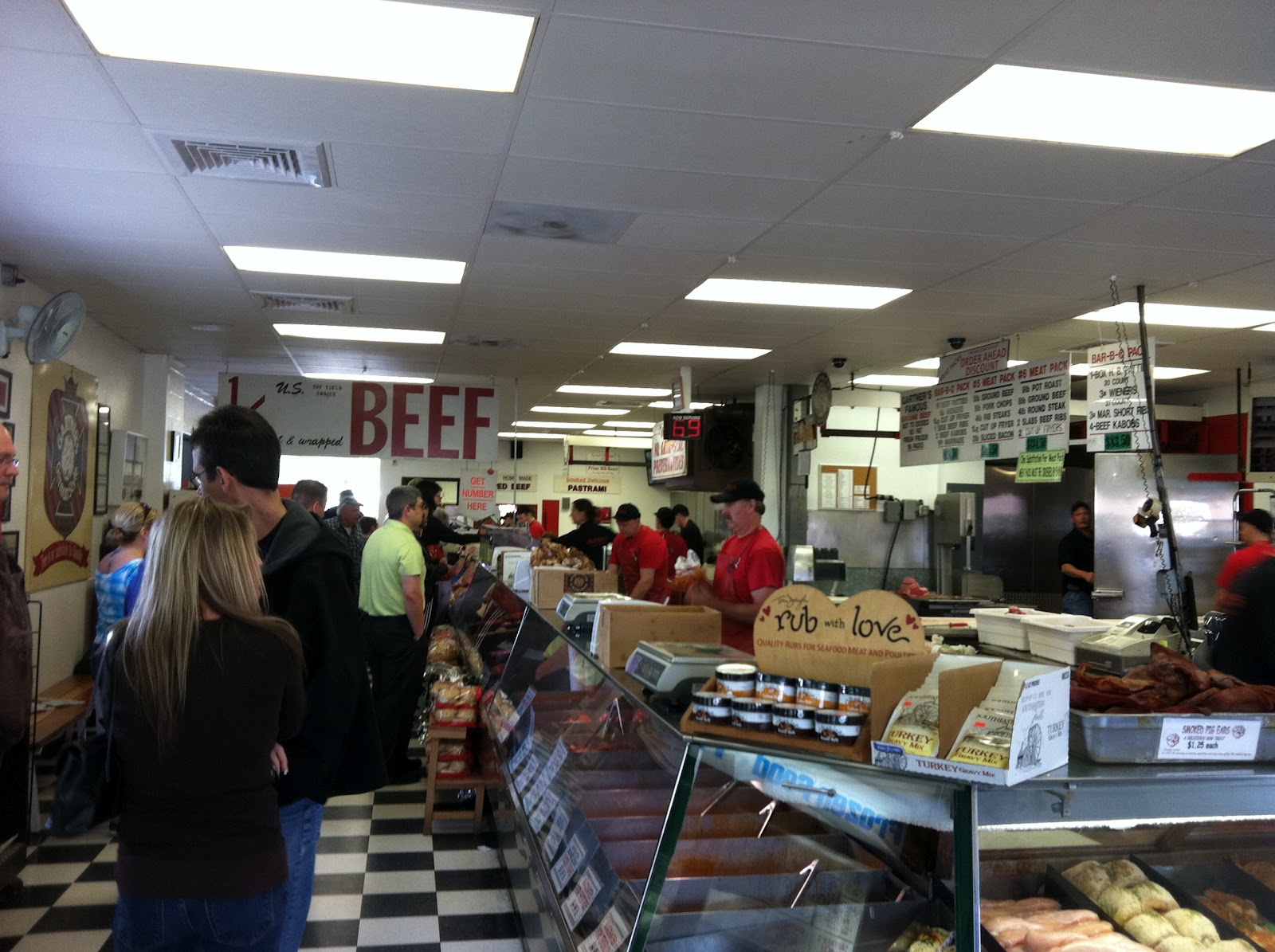 The brisket may have started at over 14 pounds, but there is a LOT of fat to trim from a full packer brisket. 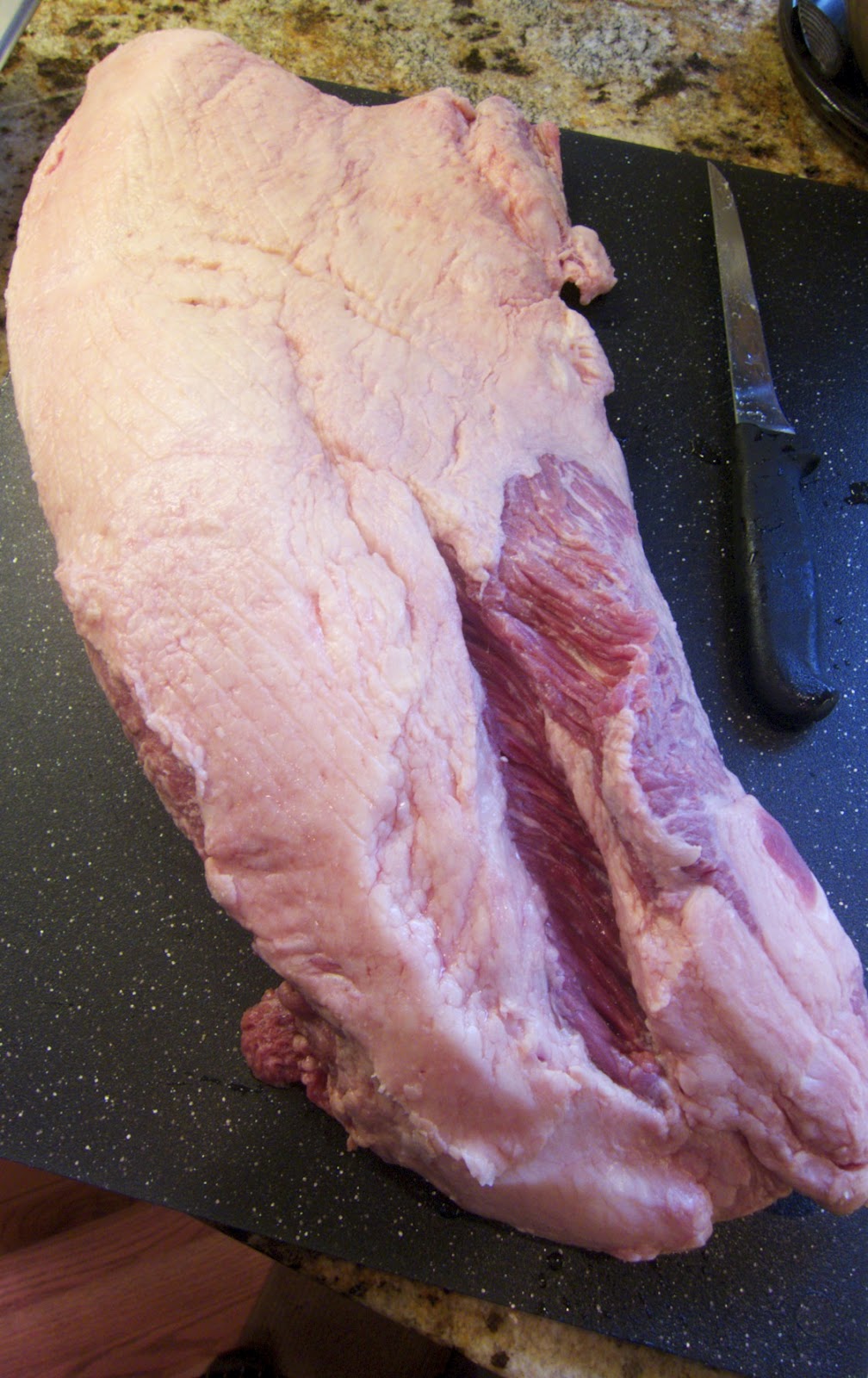 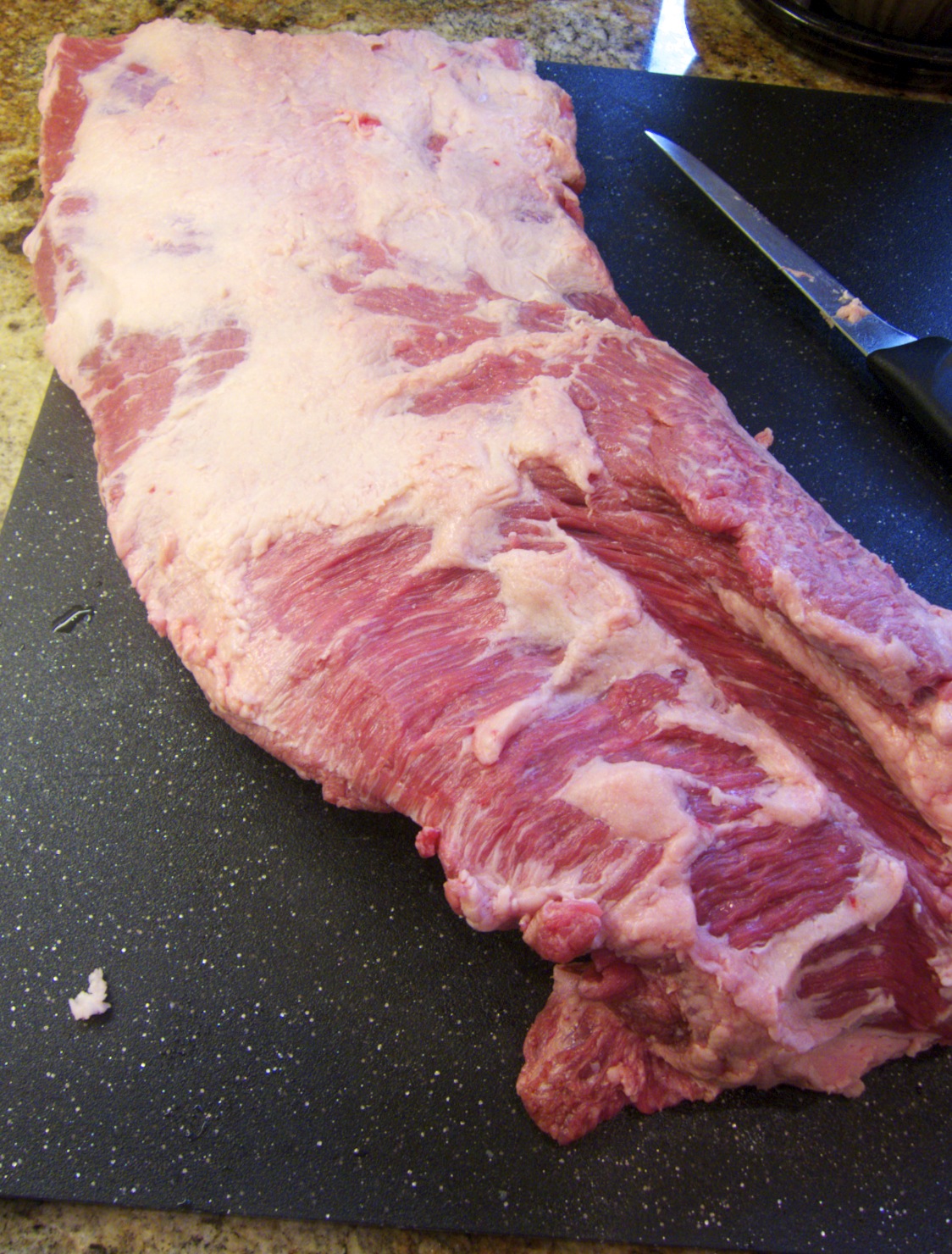 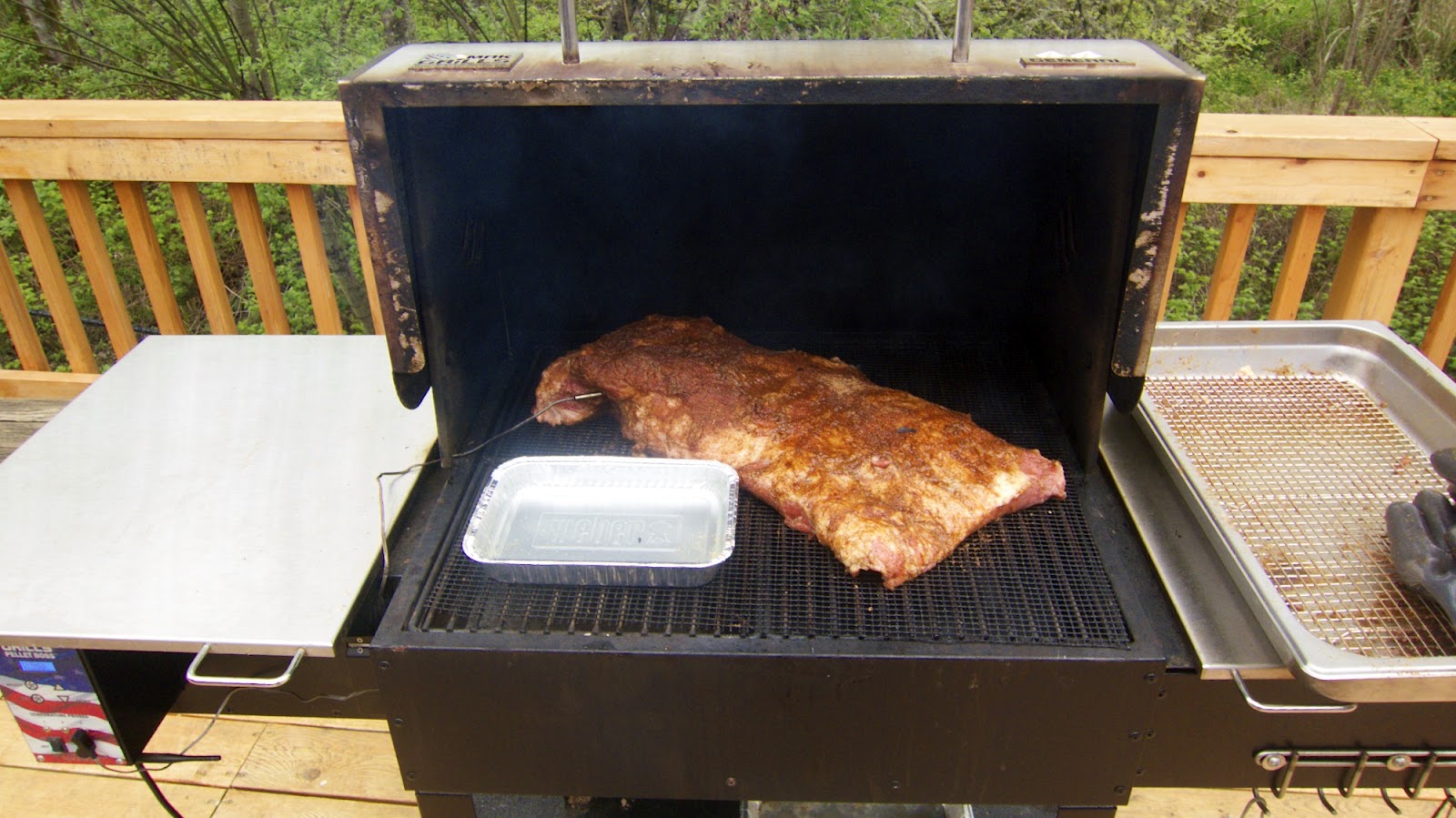 The Mak 2 Star General smoker doing what it's named for 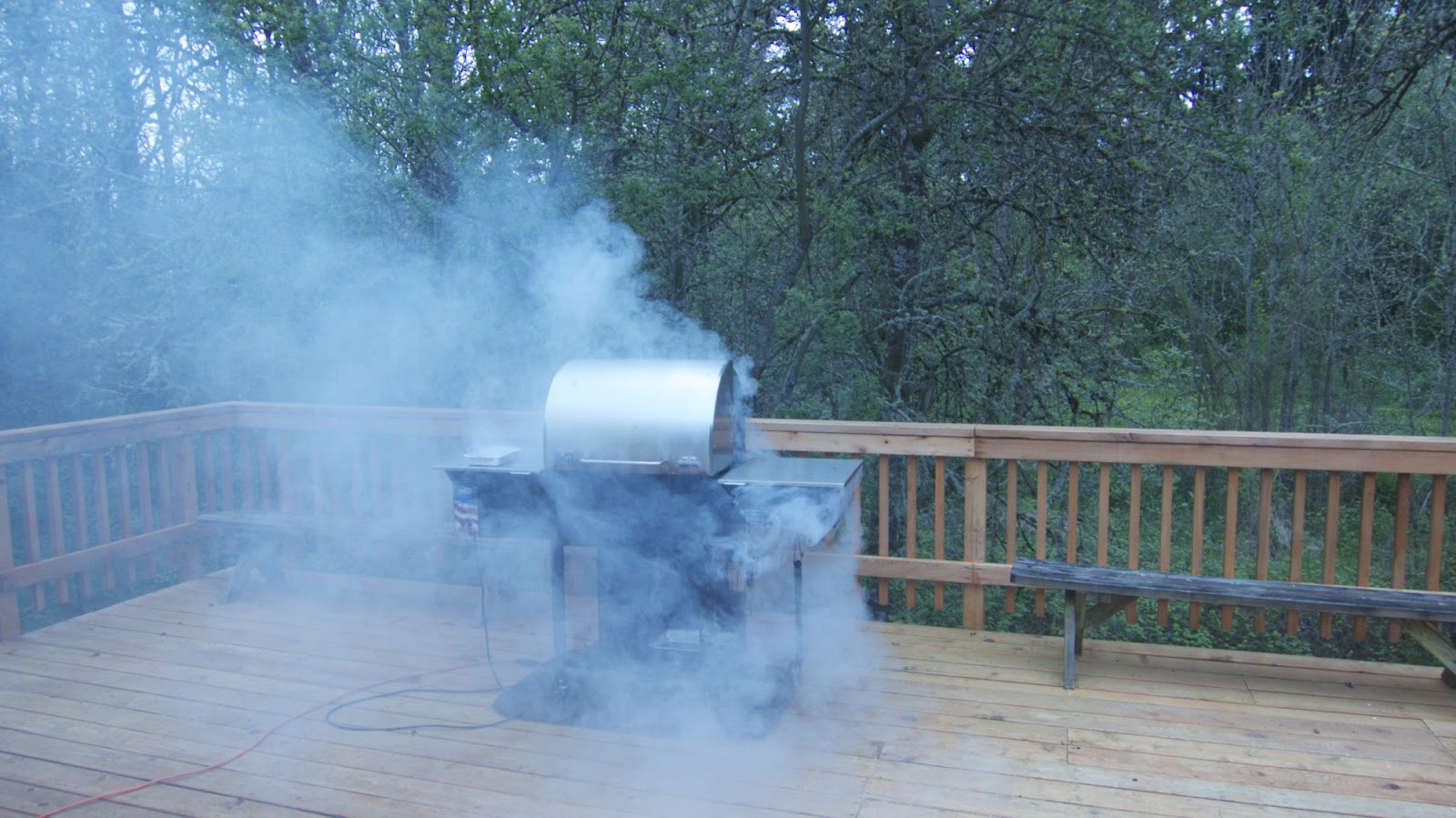 After 12 hours cooking on the rack and a couple braising in some beer, I get this: 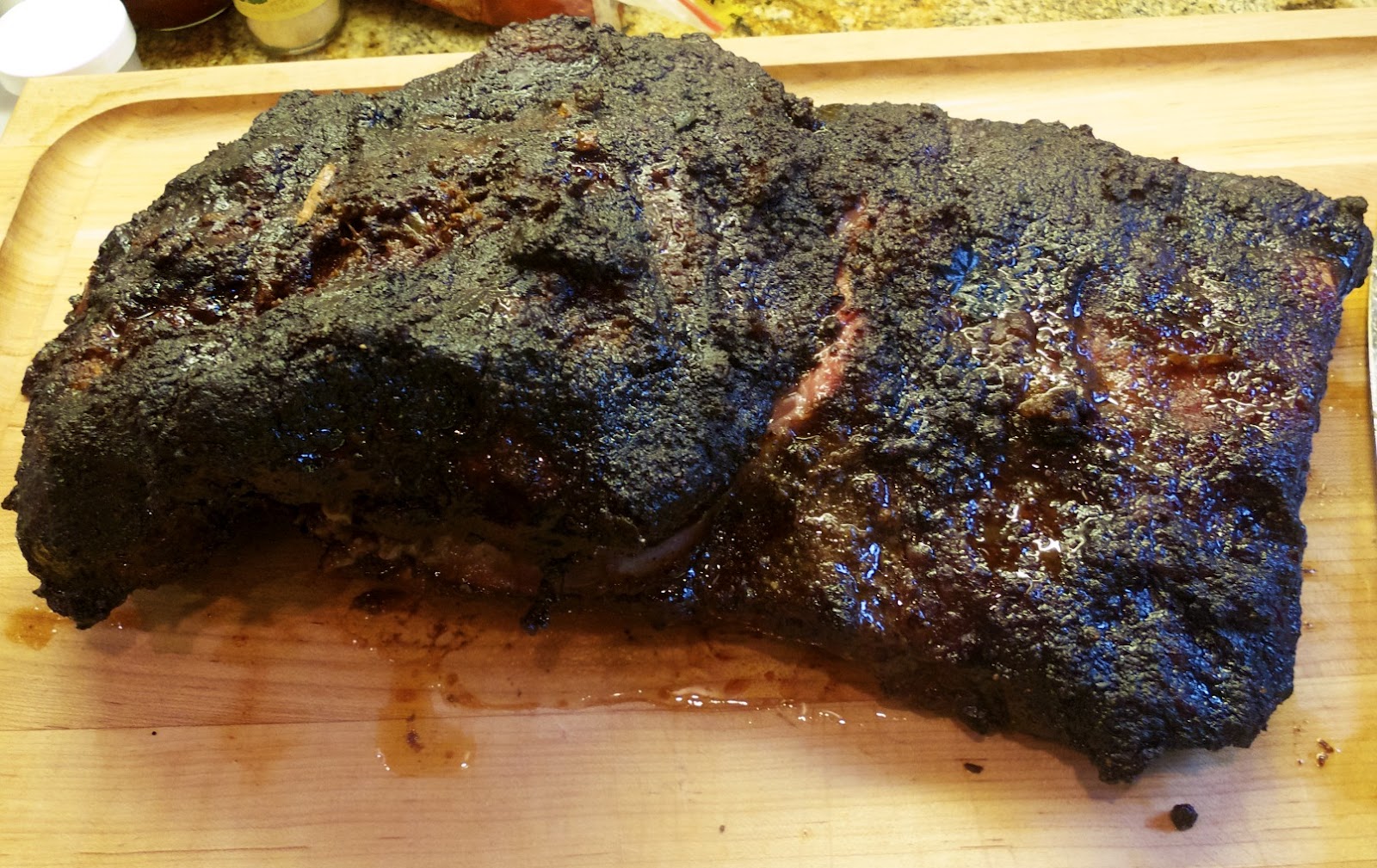 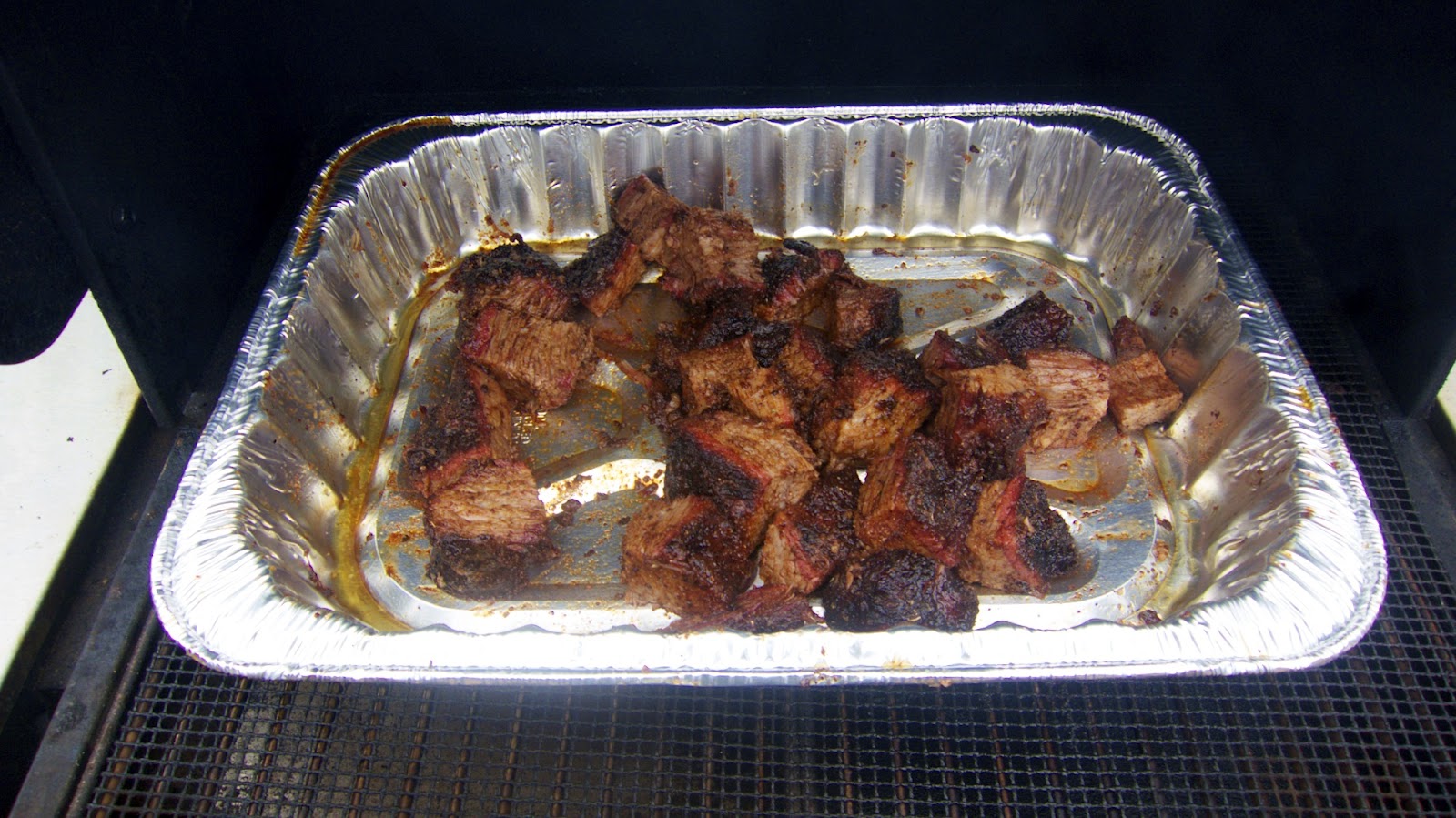 I sliced the flat across the grain 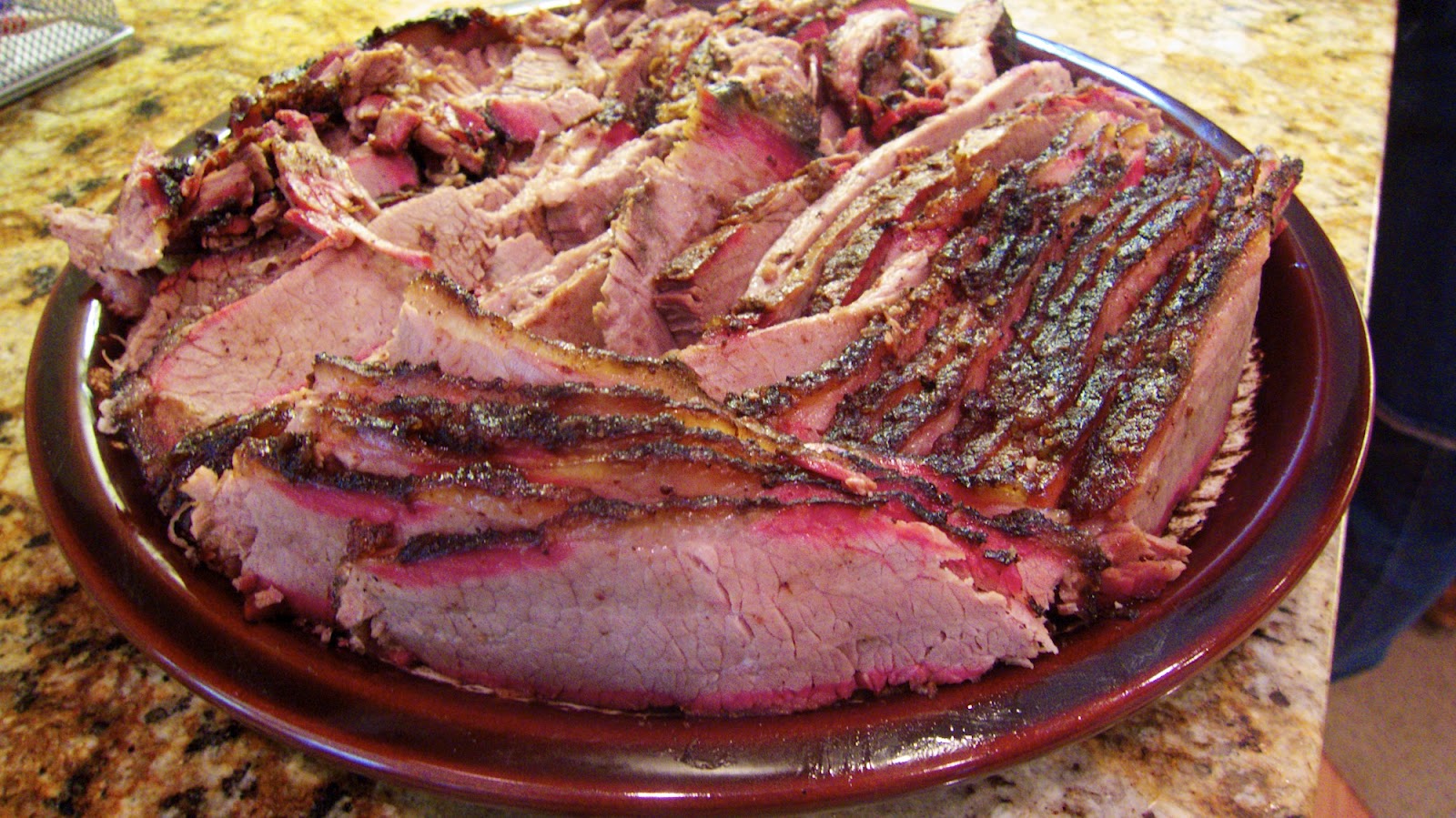 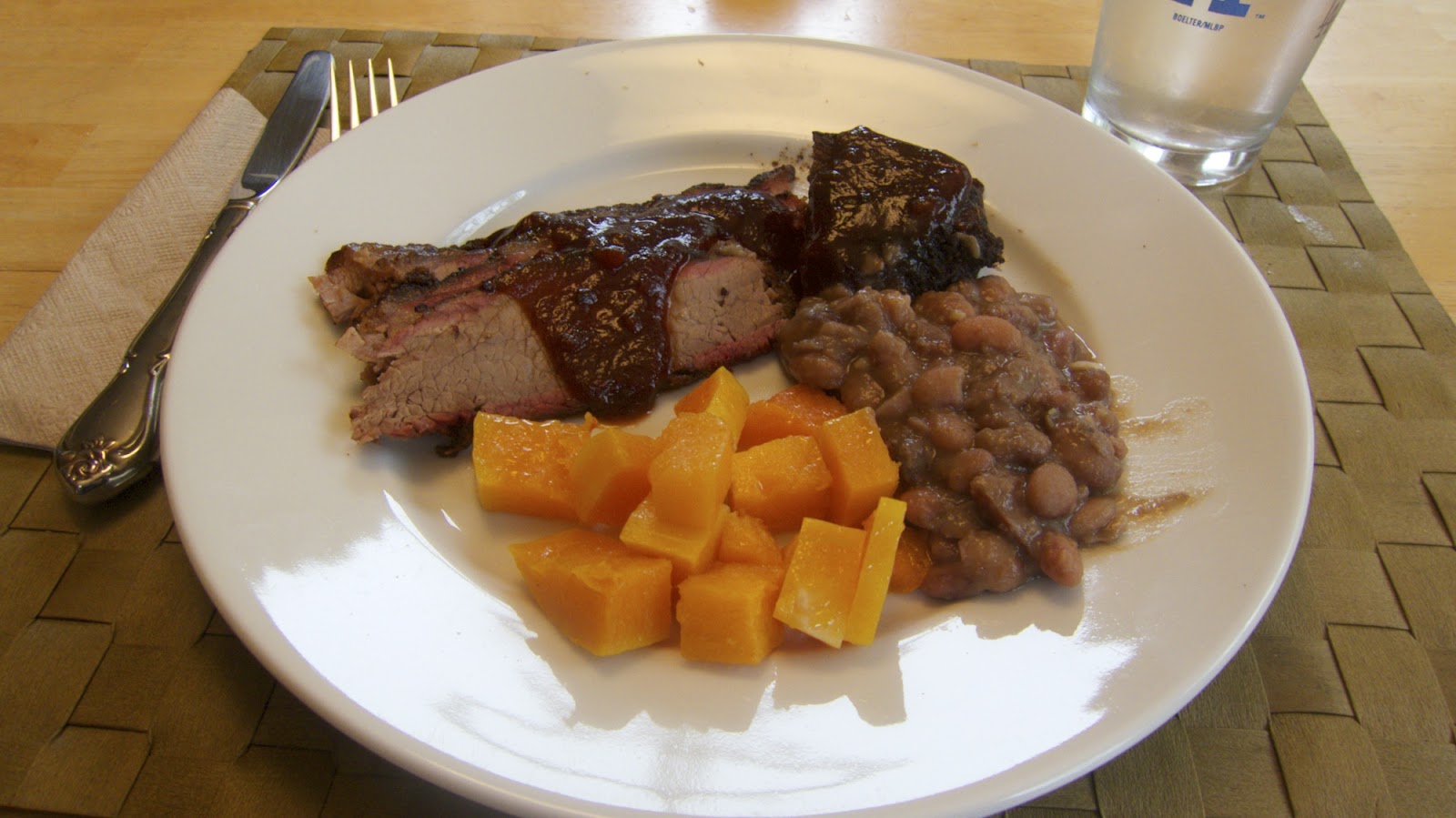 Got some rack of lamb from Costco. De Bebe said it was time to cook them. So, onto the MAK they went.

Olive oil, garlic powder, salt and pepper on the broccolini.

DSSR and Desert Gold on the chops.

Searing, then resting, then indirect cooking at 325F while I did the broccolini direct. Pulled the chops at 130-ish.

Rave reviews from De Bebe: She said they were the best lamb chops she had ever had. She looked at me with love in her eyes, and she told me that she couldn't believe I was going to be her husband.
Last edited: Apr 29, 2012

Been cold and rainy all weekend up north - and a frost advisory to boot tonight! But we said the heck with it and rolled the Yoder outdoors to get smoking!!

Started with a pork loin that I fileted out for stuffing and let it rest a couple hours in the fridge in a pork brine. 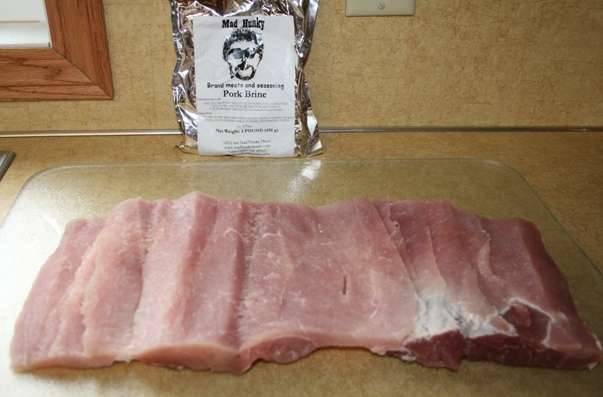 Sauteed some red onions, celery, and garlic in some butter. 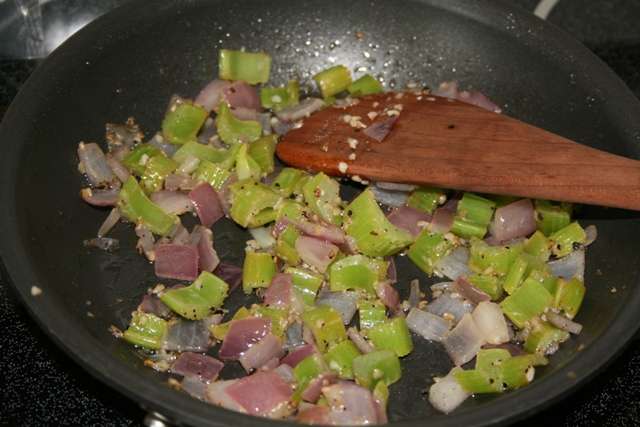 Once the veggies cooled it was time to add them to the pork with the other fixings!!
Layed the pork out and seasoned it with our Tatonka Dust; added the veggie mix (red onion, celery, garlic), cubed pancetta, goat cheese and some fresh mozzarella cheese. 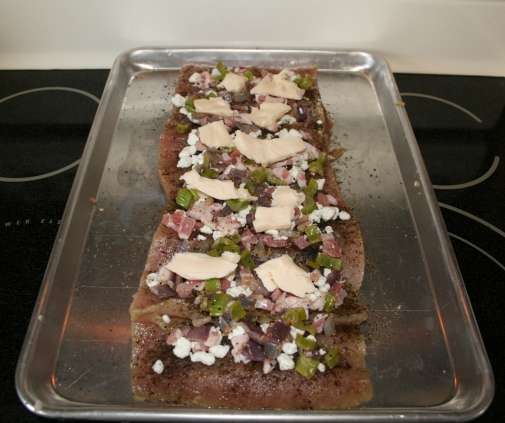 Rolled it up as tight as I could - THIS THING IS A MONSTER!! LOL
And added some bacon and for safety measures I secured it all together with some cooking rubber bands. 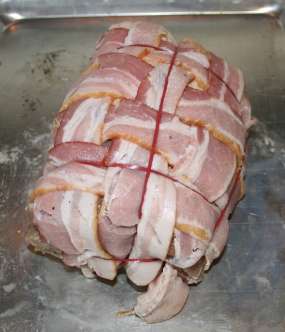 On the grill....it is a little bacon party with some shrimp ABT's!! 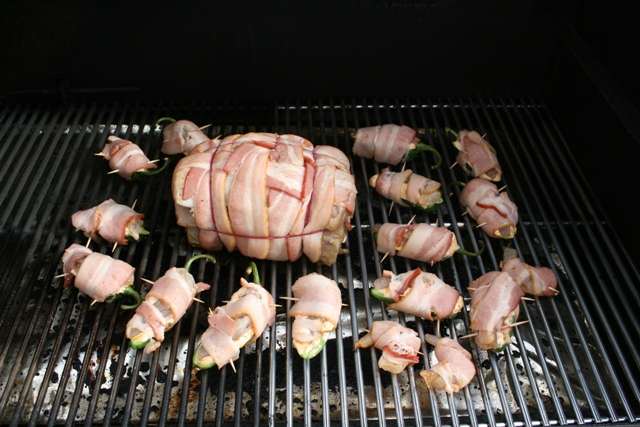 ABT's finished and ready for some snacking!! 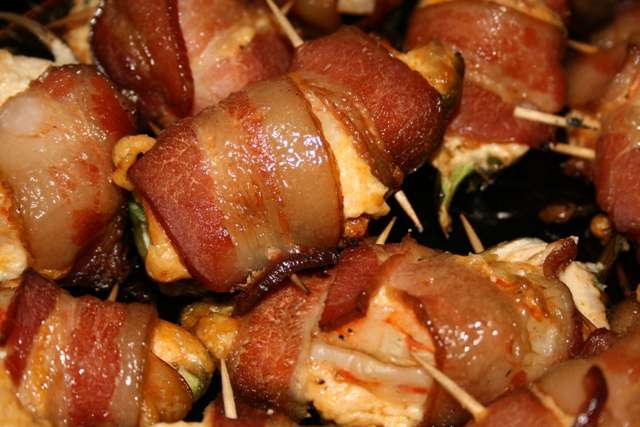 Tried something new with the stuffing - made it up on the stove top like usual but this time I changed it up and formed them into stuffing loaves and added them to the Yoder for a little smoke and to crunch up a little. 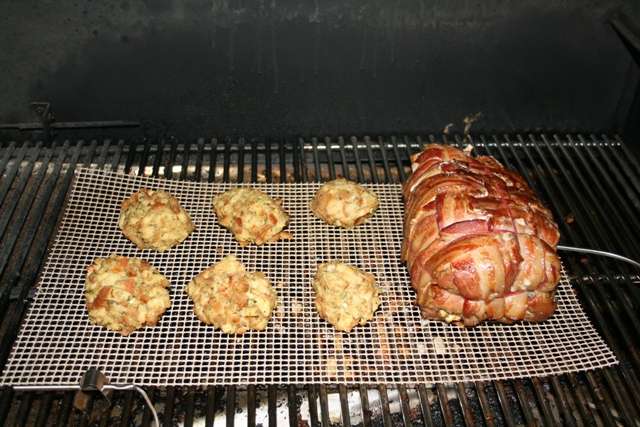 Close up of the pork loin sliced. 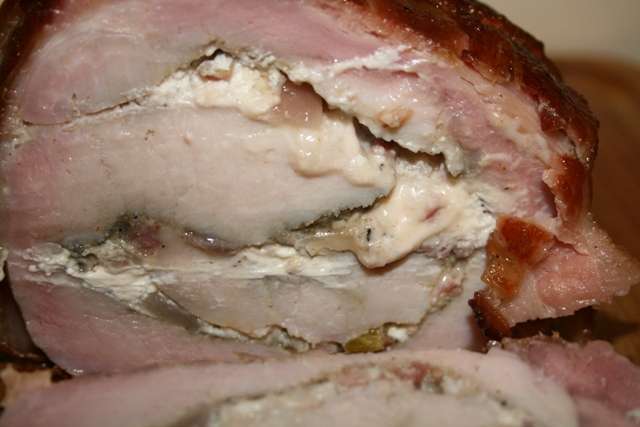 Plated up and ready to enjoy!! I think I will be making stuffing like this all the time - the smoke flavor was good and it add just the right amount of crunch!! The pork loin was excellent and you can't ever go wrong with shrimp ABT's! YUMMY!! 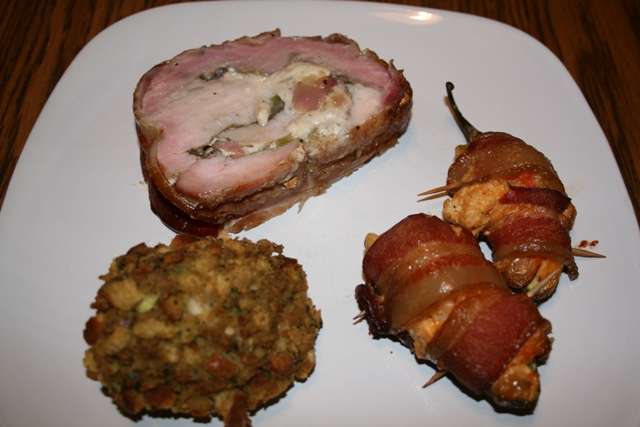 One of my favorite things to cook just got better with the new Money and Happy Ending rubs.. Started with a 5 Bone Pork Rib Roast rubbed with a little EVOO, Little Louies with Pepper and Money..

Plated with the beans and a fresh Mango/Avocado Quinoa Salad

And the winners are...

What a week! I can’t believe all the great cooks this week. Not only mouth watering food, but great descriptions, presentation and photography. Just keeps getting better.

Chili Head Burgers and onion rings on the MAK with a grilled mango and butter pecan ice cream for dessert.

I can find nothing wrong with this cook. From where he bought it, to the spice rub, the cook and the results. Presentation was top notch. Brisket looked great.Nice cook.

I liked everything about this cook. Simple, but you can taste the flavors of the ingredients as he puts it together. I absolutely adore Caribbean cooking and love seeing it improved with pellet cooking. Congrat’s on a great cook.

Before I announce the winner I put to this esteemed forum the following. I have a hard time wrapping my head around the depths of depravity one’s mind must descend to come up with ingredients in this cook. How does one sleep at night with the sound of thousands, nay millions of squealing souls begging for redemption from a life wasted only to be compared to a product like Smuckers. Yes I think we all know who I am talking about and may God have mercy on her soul. Bacon Jam indeed!

Deb you knocked it out of the park with this cook. Inventive, creative and totally out of the box! Everything looked fantastic. Can’t find a minus on this cook. Must have bacon jam! You probably raised Oscar Mayer stock a buck with the bacon jam idea. Great job.

PS Just kidding about all the depravity stuff!


Congrat's to all the winners and as always thanks to BP for the forum and goodies!
B

Congrats to the winners....all great cooks!!!!

Congrats to the winners!

Thanks for judging Rick!
And thank you BP for hosting!

Congrats to the winners and everyone who participated this weekend! It was quite the experience to be right there as Deb's cook was plated and we sat down to enjoy the delicious food and yummy smokey Bloody Mary! The Bacon Jam is to die for, honest.

congrats to the winners. another week of great cooks.

Another tough week to judge!!! Congrats to the winners. Actually, congrats to everyone who played this week.

Thanks BP for hosting!

Congrats to the winners, great cooks this week.
S

Congrats to all the winners. Thanks for judging Rick and thanks for hosting BP.

Congrats to all the winners!! and thanks BP!

COngrats Ht and Deb.. thanks BP!! That must have been a hard week to judge Rick..thanks!

Awesome week everyone, congrats to all the winners.

Congrats to the winners!