Deb is the Judge! This weeks contest! Enter and win big!

Lets have a barnburner! Minimum of six people enter and

If there are 12 entries I will add a new first place of $35.00 Store Credit and pay four places!

Whoah! BP is rolling out the big red wagon full-o-cash this weekend.

Can't wait to see all the entries.

Very generous BP! I may have to jump in the fray this weekend!

Love it Bring it on!

um, also for my smoker.

Bring it on ppl (I learned this word from Sparky )

I'm working all weekend and not doing alot of cooking so cook me a meal!!

The Smoking Lamp is lit! 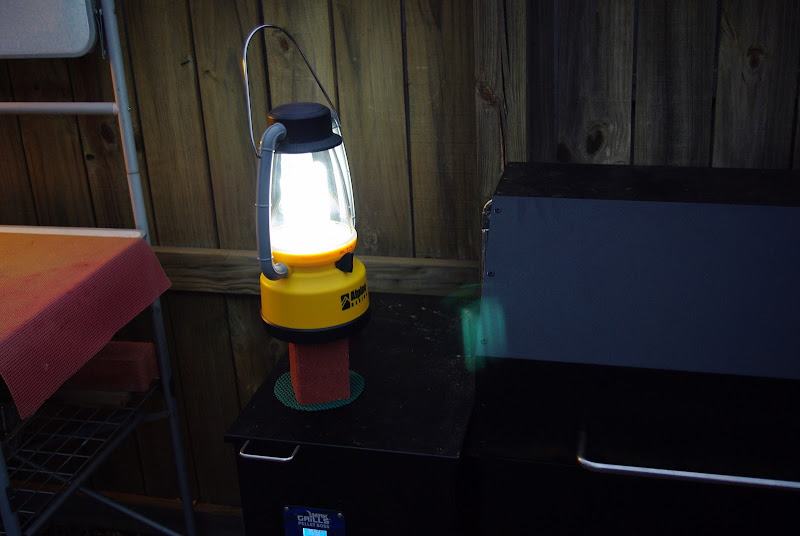 MAK'Ing the chili. Added masa to thicken up.

I plate my chili

Growing up in a spanish household my mom always had lemon juice around. She said it wakes up the tomato. Ok there is my entry.

My wife bought some Ciabatta bread and wanted to do something with it...I suggested Panini Sammies, she said, "We don't have a Panini Press"...I just smiled.

The Personal Pizzas are for the kids.

First up, soften up some veggies, about 30 minutes at 250

The Ciabatta bread was butterflied, brushed with the olive oil, and the ingredients were layered on.

On to the wood fired oven, set to high (~425 today). The homemade panini press is shown: Grill Grates and a brick, perfect! Cooking time was about 20 minutes.

The grill marks would be even more pronounced if the brick had been on the whole time, (thought of it about half way through)

These turned out great! Cripspy outside, gooey inside. My wife has already bought more Ciabatta bread.

The rest of the pizzas were thrown on...the best part of these 8" pizzas is everybody got to choose their own toppings. A simple and fun dinner!

That looks great Rip
B well, got home late afternoon. it was snowing up in Paradise and my wife didn't want to spend another day looking at houses in the snow. it was a long day anyway. no problem dear. i will take ya home (really wanted to get back to my MAK, don't tell her that). my wife was tired and hungry when we got home. heh, i go to the butcher dear. what would you like to eat (see how smart i am, while at butcher i'll get some ribs too, nice. i am so smooth)? she said chicken. cool. i can work with that. as i am walking out the door, she comes up to me a gives me a kiss and then said in a stern voice, "only 2 racks of ribs, no more". she knows me to well. i was going to get 3. oh well. at least she let me have two. alright, enough already. didn't DEB say make me a meal. well this is for Deb and my lovely wife.
going to start with jeanie's corn. love the idea. its was good too.

fired up a old friend because the mak was in use.

made some twice baked potatoes also. onto old friend.

took everything off when done (how does jeanie keep the dang bacon on?). wife was happy and thats all that matters.

Ribs for DEB
cast off that bow line sailor and lets get underway. yo, you on the fantail, but that butt out or whatever it is. i, i skipper (thats me the skipper, come on ppl play along).
a light glue and a little dusting of the boys.

sprayed a couple of times with some secret nectar. 2 or 3 hours later (wasn't timing anything).

time for some goodies ppl.

ya'll should really come over for some ribs. they were dang good (not the word i wanted to use).
These are my Ribs 4 DEB.
Last edited: Mar 26, 2011

Had some of the in laws over for dinner and they requested that we do Italian sausage and peppers (a big accomplishment as they are VERY Italian!)

Assemble the rest of the ingredients for the party

Onto the MAK griddle @400 to finish them off

After a 20 minute simmer

Served up on a bun

This has become a family favorite and I love the fact that my in laws love it! It is very versatile too you can do it on a bun or serve it over pasta for a nicer dinner. The key when doing it as a sandwhich though is finding good bread.
B