OK Thank God it's the weekend because that means contest.....Tricky eh?

You kno w the drill get off your rumbs and smoke some fabulous food and pick my pocket while you are at it!

Every body else that is left....$5 bucks store credit to Big Poppa Smokers

Post away and make it tougher than ever to judge!

Finally found some Tri-Tips - been looking for some time. 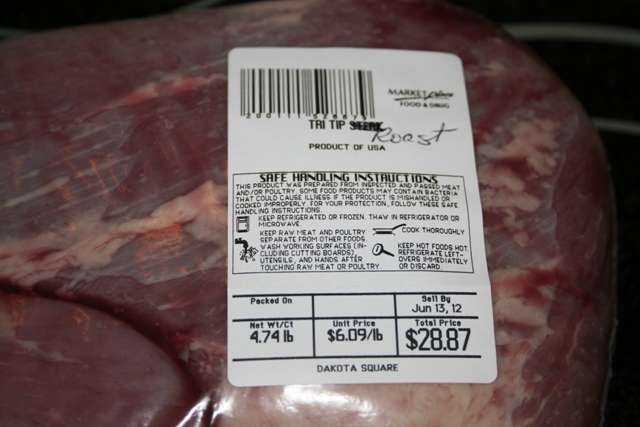 Made a marinade out of the Tatonka Dust and back into the fridge for a few hours. Here they are ready to go on ... the toothpick is marking the difference in the marinade experiment. 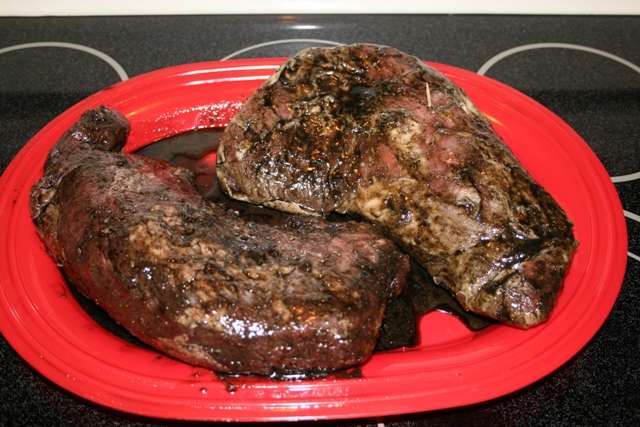 Fired the Yoder up to 150° with Oak pellets and added our new toy filled with Oak as well. This is the new 12" AMPTS from Todd. LOVE IT!! Let it smoke for about 90 mins. 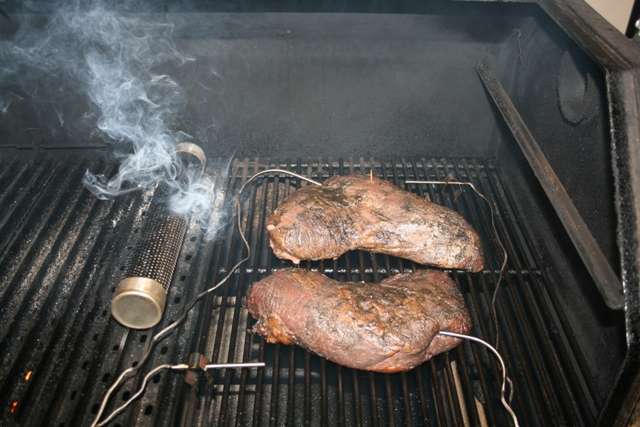 Had to get some veggies in and of course some shrimp!! 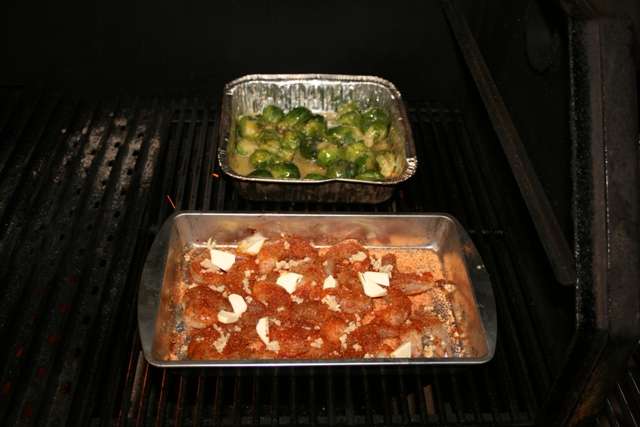 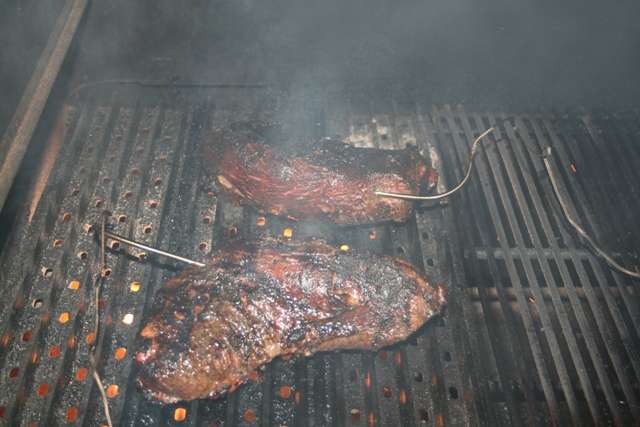 Cooked a few mins on each side and then pulled them and let them rest for 15 mins. Still had juices all over the cutting board! 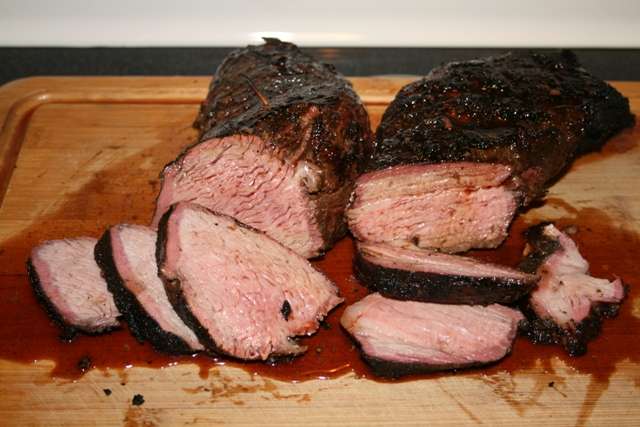 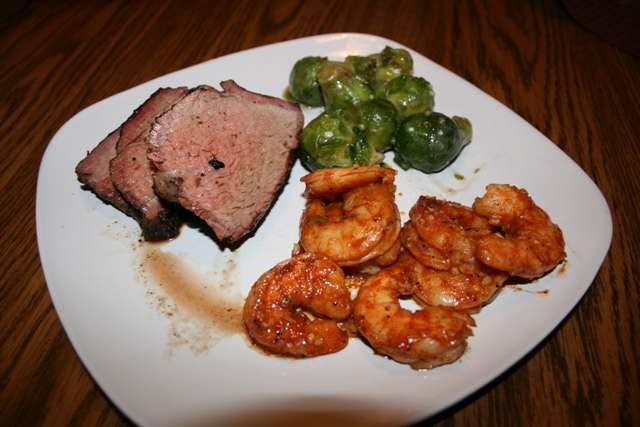 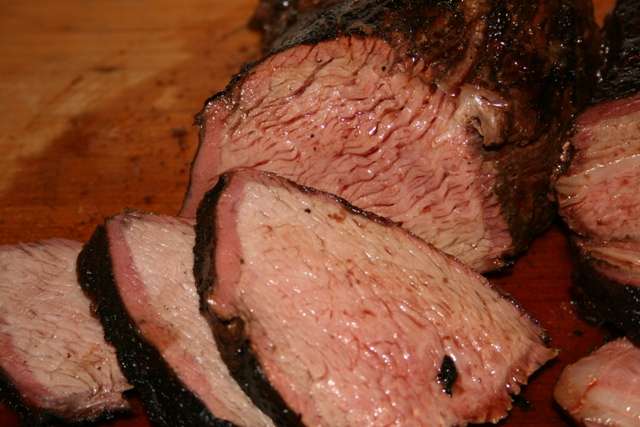 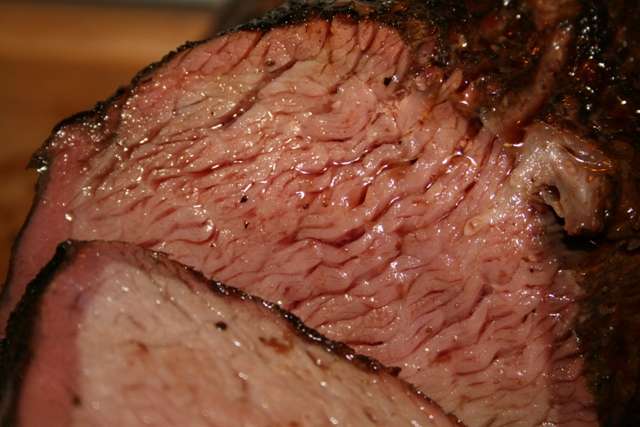 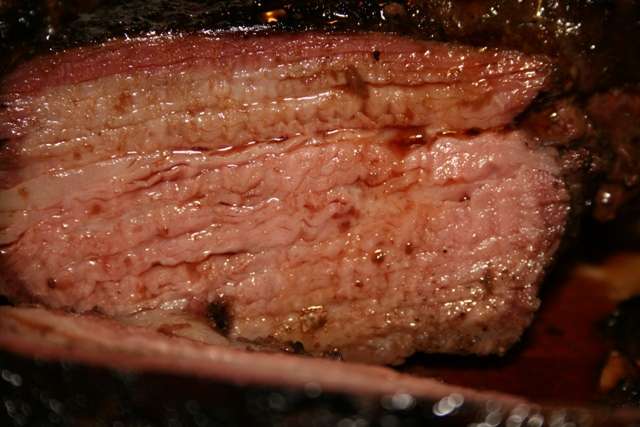 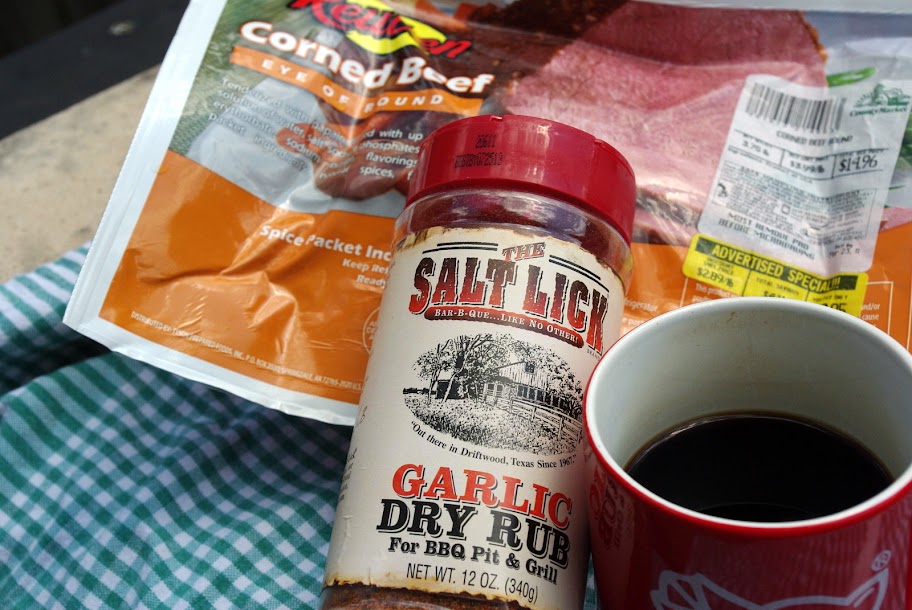 Trim (didn't rinse, gonna use the corning liquids for 'glue'), and rub-a-dub with some Garlic Salt Lick. 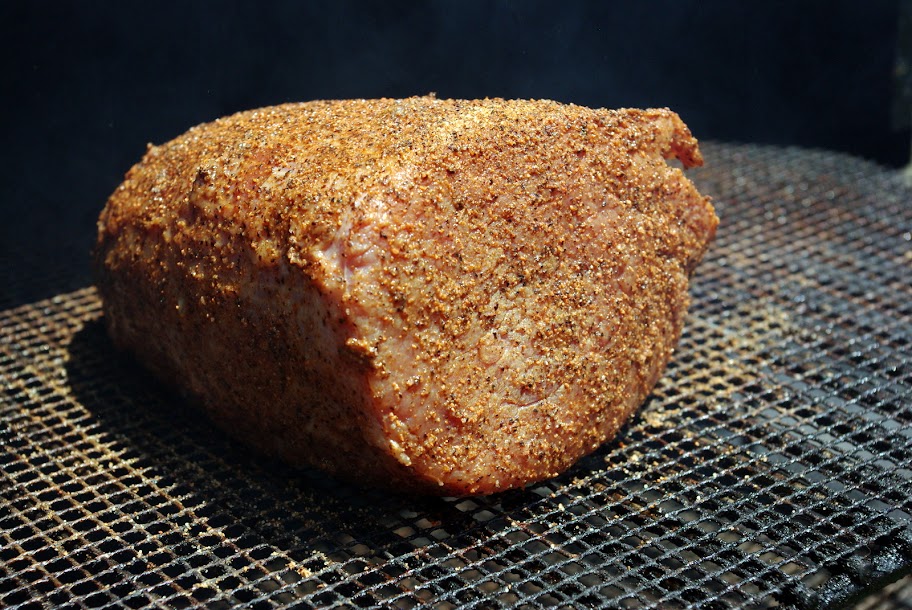 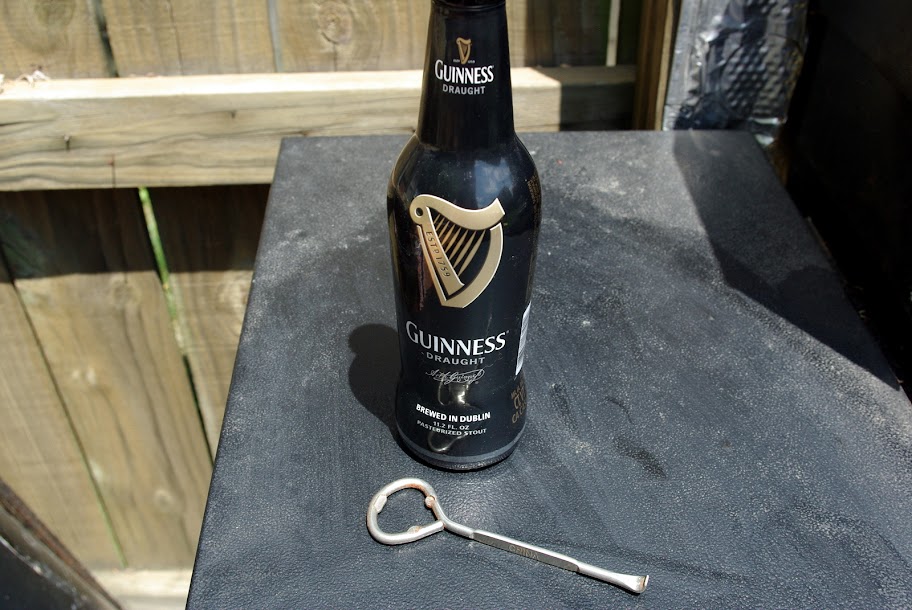 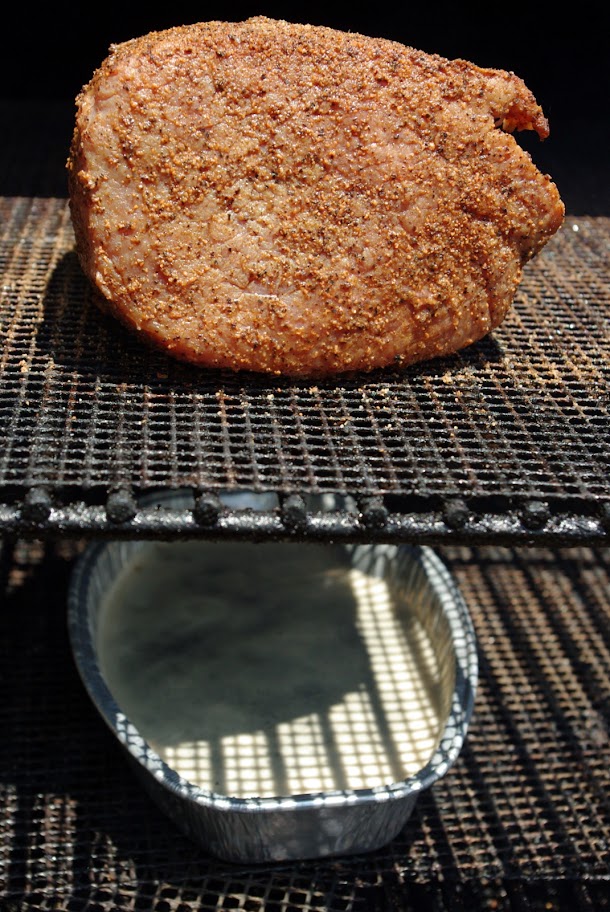 Cruising at around 235°. I'll stab it before we go to church and see if it can just rest foiled in the crock pot.


Gonna be a hot/humid one today. Even the Alpha Sentry isn't all that interested. 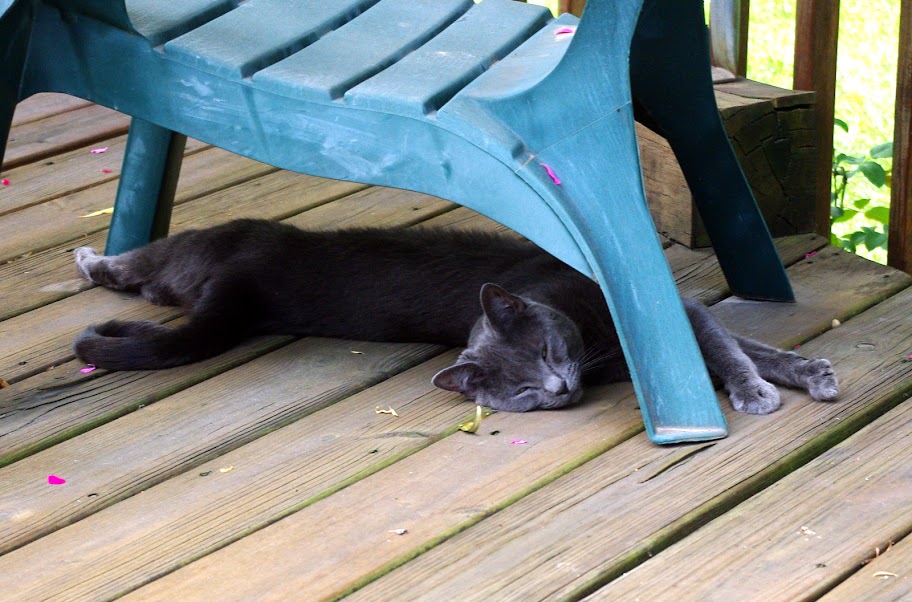 Note to self. Pick up rye bread, Swiss cheese and some good kraut..

We'll check back in a bit.

Went back for a peek.. 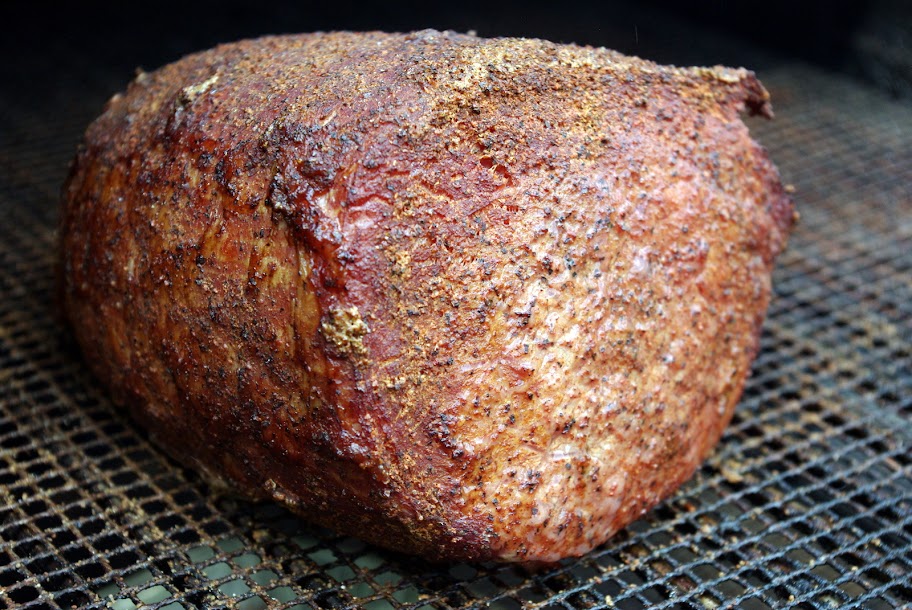 Time to probe it. Close enough. I'll have you know I had to up my shutter speed to catch that Thermapen live shot.. 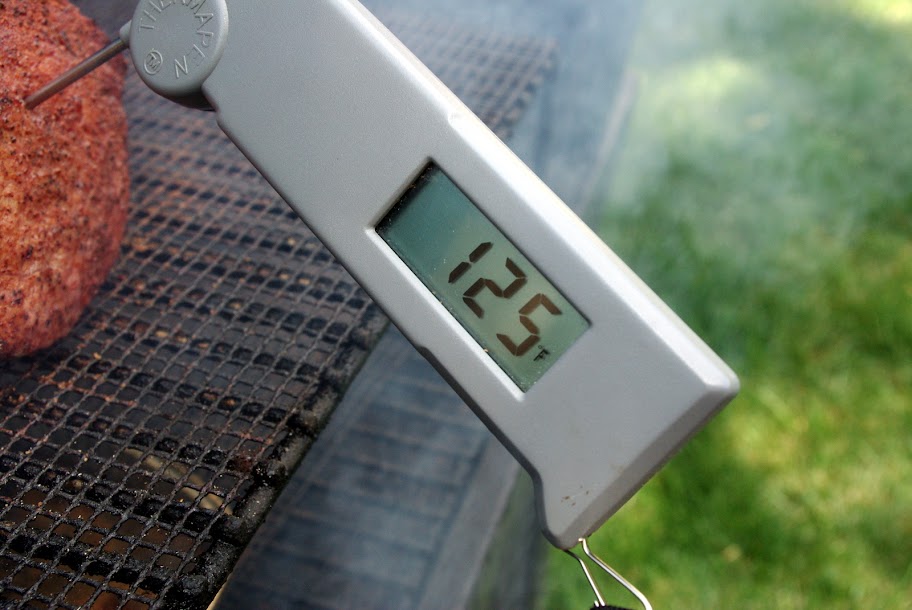 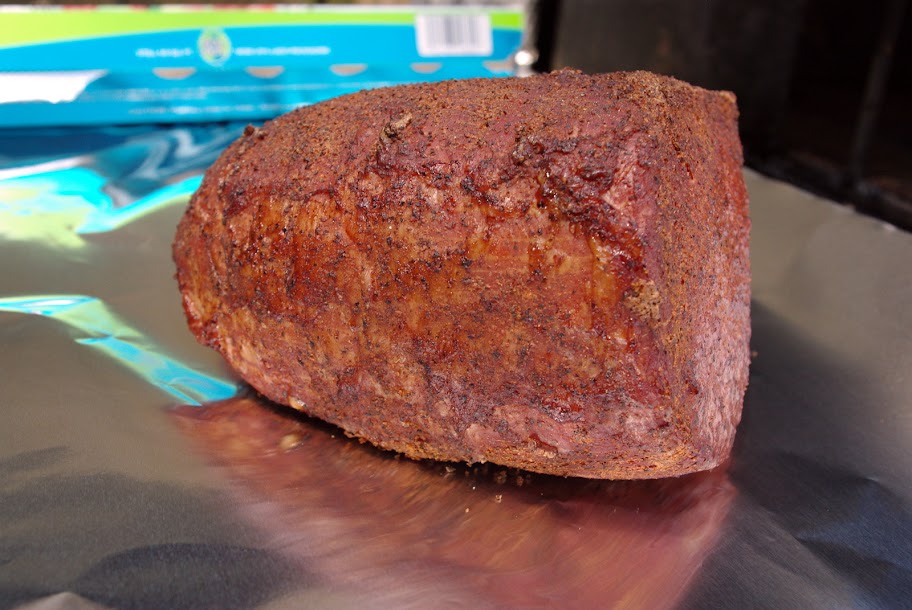 All wrapped up and into the crock pot 'oven' on low for a few more hours. I added a 1/4 cup of water in there to keep the moisture level up. 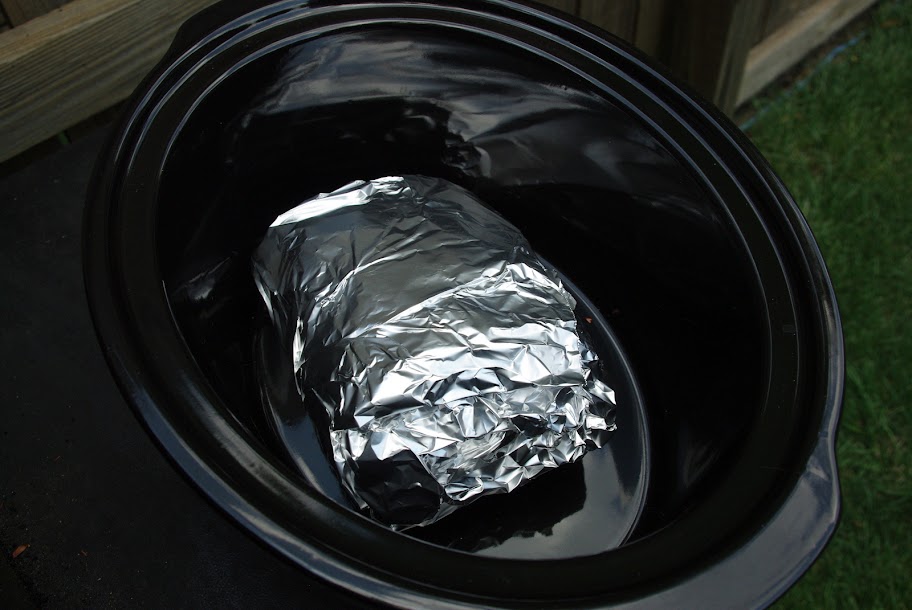 
Sliced.. (piled back into the crock pot to keep warm) 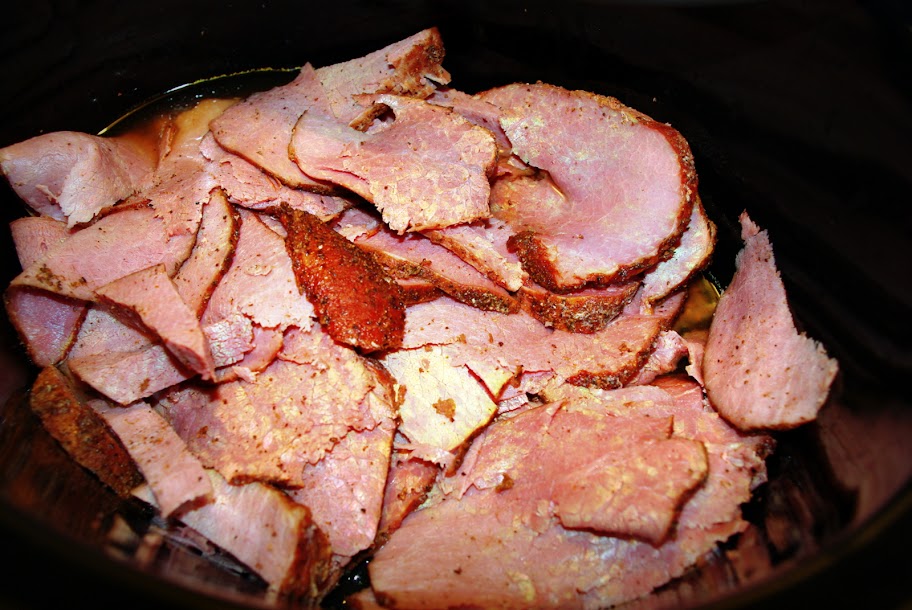 And plated up. Jewish Rye bread, a bit of 1000 Island dressing, 'Driftwood Pastrami' piled up, some Franks Quality Kraut out of Ohio, and a couple pieces of Swiss cheese. Sided with some Talk Of Texas okra pickles.. 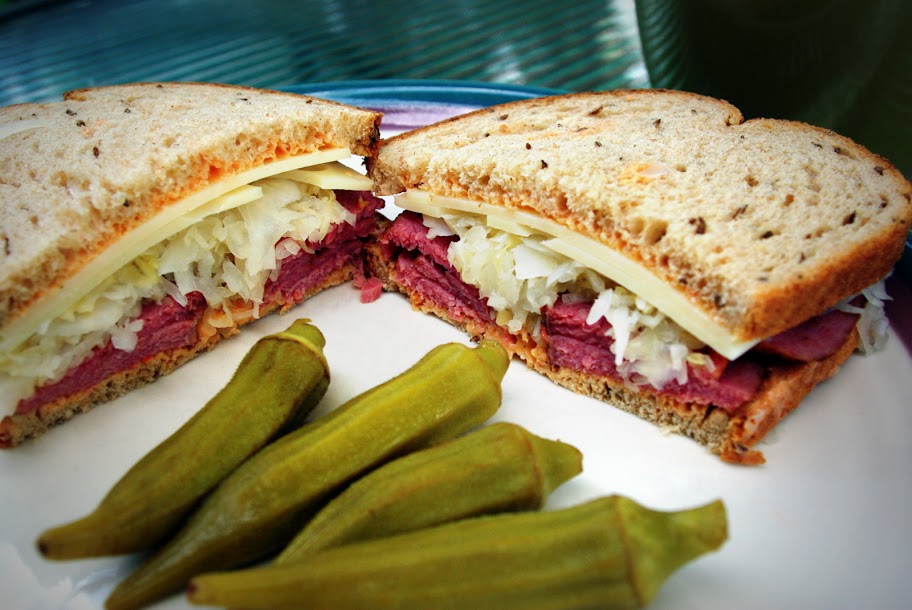 So, I've never done ribs before. I went to one of our rib experts, Sparky, and had him clarify for me his process. For some reason, I just had to have ribs this week. So, that's what we did today.

Used Yardbird on one rack. The other rack I used Little Louie's, but I added some fresh cracked pepper. I wanted a finer grind to the pepper, but I was too lazy to fix the grinder. So, I just used some Ancho.

A little yellow French's glue and the above rubs.

On to the grill they went at 275F for two hours. Then, it was FL time. In the FL, I had Filipino Banana Sauce (kind of like a ketchup), some Bragg's Apple Cider Vinegar, and some butter.

After FL time was over, after using the FL liquid to baste the ribs.

Finished product. You can see we had some grilled asparagus too.

Tasty beverage to wash it all down.

Thanks, Sparky! We really enjoyed that dinner!
Last edited: Jun 9, 2012

Okay, I am new (which you will figure out by my question). I just don't understand the whole *contest* thing. I see contests over and over but can't figure out how one wins. The only thing I can guess is that everyone is a winner because they all get a fantastic meal. Is is just all about pictures and great food? I really hate to be so clueless, but I guess I have to embrace who and where I am.

Winner of a contest is the judge of the next contest. All you have to do is post something you cooked with pellets. Generally, contests start on a Friday. Entries may be submitted until the end of Sunday. If Monday is a holiday, we have until Monday night. Pretty simple really.

Tilapia with Tomato and Basil

My wife wanted Tilapia and I wanted to use my MAK. Tried something a little different for me. First, put some green beans in a pan with butter, garlic and Desert Gold and put on the MAK.

Halved some small tomatoes and added to the green beans:

After a few minutes, added some water and juice from a lemon to the pan of green beans, and then foiled. Put the Talapia on the MAK at the same time:

This came out really good. I wil try again. Thanks for looking.

Ah, I understand now. Thank you!!! Sounds like fun.


roburado said:
Winner of a contest is the judge of the next contest. All you have to do is post something you cooked with pellets. Generally, contests start on a Friday. Entries may be submitted until the end of Sunday. If Monday is a holiday, we have until Monday night. Pretty simple really.

Kite said:
Okay, I am new (which you will figure out by my question). I just don't understand the whole *contest* thing. I see contests over and over but can't figure out how one wins. The only thing I can guess is that everyone is a winner because they all get a fantastic meal. Is is just all about pictures and great food? I really hate to be so clueless, but I guess I have to embrace who and where I am.
Click to expand...


The opening post of each weeks thread gives the details of the prizes...this week there is a bonus if we get 20...sometimes if you are lefthanded...heheh It is whatever mood Im in on early Friday morning when I post.
S

Started with a rack of lamb and trimmed some of the fat cap away.

Added some Money and after this replaced the fat trimmings on top.

Ingredients for a raspberry chipotle sauce for the lamb.

Some pictures of the final plate. The lamb turned out nicely, served with rice cooked with Desert Gold and sprinkled with a little bit of the adobo sauce from the chipotles, green beans with a sprinkle of Desert gold over the top.

i love Hazel. i believe her and #336 are going to make a great couple.

got some annies, swine & bovine rub and some tatonka dust. yes i am dreaming about football.

for the 1st time in my life i wrapped the tri and put in frig overnight. i seen muebe do this all the time. he's pretty good cook. thought i would try it.

everyone in the pool. i'm using oak pellets in my cast iron pot.

oh ya, were done.

do you see the smile on my face.

I started out by seasoning the inside of the bird with this.

I chopped the garlic shoots and stuffed them inside after seasoning.

Next I peeled the Skin back to get the seasoning under the skin and I re covered the bird to help keep it moist.

Next on the to do list is the quinoa and vegetables. I used some carrot,onion,beef stock and zucchini.

The veggies were chopped and sautéed first then I added 2 cups of water with the beef stock and 1 cup of quinoa.

Cooked it down for 20 minutes or so.

I made a bread pudding for dessert with some peaches fresh from the farmers market and some mango macadamia bread.

Ok the chicken is done and resting as the bread pudding, roasted stuffed tomatoes and grilled asparagus, zucchini and garlic shoots go on the MAK.

I missed the picture of the cored tomatoes with the quinoa.

Alright now everything is done..the chicken has the skin removed and the veggies are ready.

Delicious! Eating healthy ain't so bad! The chicken was super moist and one of the best I've done so far. I love grilled veggies of all kinds and it's my favorite way to prepare them.

A scoop of ice cream,raspberries and a light dusting of cinnamon..happy happy happy!

while trimming, I have friends in "low places"

On the MAK 2 Star

A couple of hours later

Ready for some Foil love with White wine.

After the foil time, I poured off the liquid contents of the foil, and ran it through a fat separator.

Packed up the liquid and put the ribs (still in foil) in a cooler for the ride across town to my Moms.

Ready to slice and serve. I reduced the drippings down to a sauce.

Sunday Steaks
After the kind of week it has been with a broken water main:

It was time for a Sunday Steak dinner, so we let some NY steaks and some salsa corn soak up some smokey goodness

Then a rest and a quick ride at 400 degrees for the steaks, salsa corn and some havarti quesadillas.

Thanks for looking.
S

I wasn’t going to cook tonight as there are some pretty good leftovers in the fridge but Deb gave me some beef she ground up and I had to switch gears and cook a burger on the Weber. I made a couple of burgers and hit them with some Double Secret.

Then on to the Weber with hand full of oak pellets.

Served up with a plate full of salad.