paying off favors. i owned the person who worked my friday shift, my son for mowing my lawns this week and my butcher for some other favors. and away we go.

used little louies w/pepper on 2 left racks and 3 eyz on the right one. then used sweet heat on all three of them.

wrapped one of rack with little louies and the other one w/ 3eyz with foil after 2 hours (275º).

the other rack all natural.
the 2 back racks had the foil and front one with bbq red sauce.

I'm in!
It dawned on my today, that I have a MAK "grill". Hmmm, grill you say? Let's see how that works. The forecast promised no rain today, so I pretended it was summer and grilled a chicken with cole slaw and a sweet potato.

First, let's start with the rub and what will the base of the sauce later. Simmer 8 minced garlic cloves, rosemary, thyme and lemon zest in olive oil for a few minutes. Separate the solids from liquid when done. 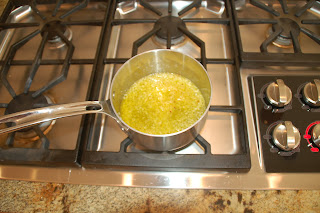 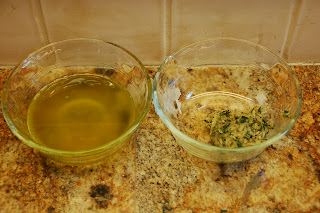 Butterfly the chicken and put the rub under the skin; salt and pepper on the under side. Into the refrigerator for a couple of hours to let things come together. 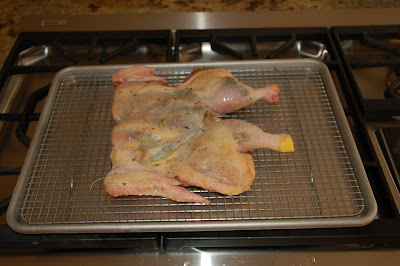 When we are about an hour out from dinner, I wrap a couple of bricks in aluminum foil and turn the MAK onto "High". I'm using the flame zone pan with the cover removed. 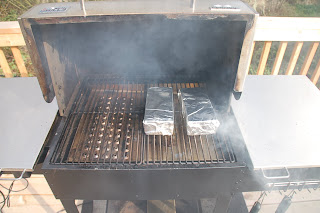 The chicken starts skin side down on the cool side of the grill with the legs pointed to the heat; we want the thighs to get hotter than the breasts. It's hidden under the bricks here, but it's under there, really. The bricks pressing down on the grill help the skin get nice and crispy; and since they are hot, they help cook the top side. 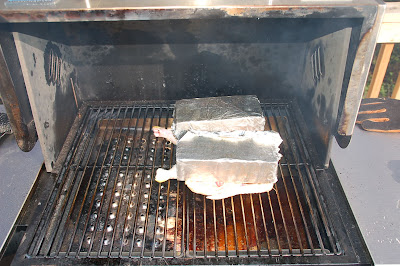 About 20 minutes later, I drop the set point to 400 and flip the chicken skin side up and put on the hot side. Bricks will go back on right after the photo is taken. 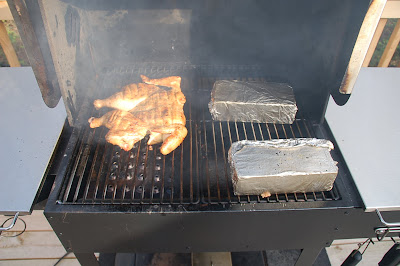 After 15 more minutes, the bricks come off and the chicken is flipped skin side down for the final crisping. Not too much worry about flame up at this point. I flip it back over to take its temp. It ended up a bit higher than I wanted; but it didn't dry out. 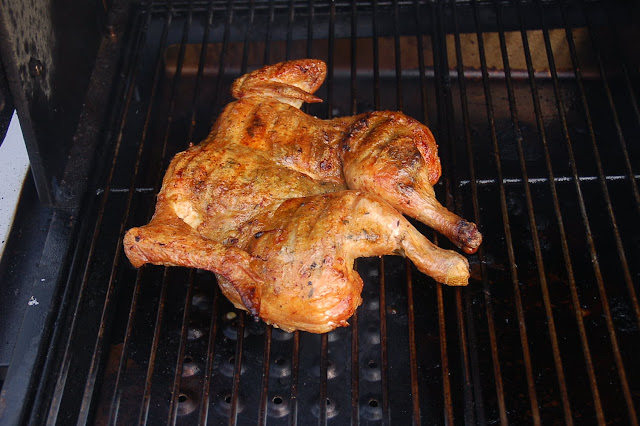 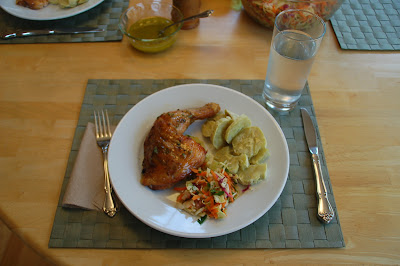 While the chicken was resting I added 2 Tablespoons of the lemon juice from the zested lemon along with a bit more thyme and rosemary to the garlic olive oil from the first step. Drizzle that over the chicken and you've got some good eats.

The cole slaw is interesting. It also comes from Cook's Illustrated. The vinaigrette is put together and placed in the freezer for 30 minutes. In the meantime, the cabbage is microwaved for 2 minutes with some salt and sugar. The cold vinaigrette then restores it to room temperature.

KyNola sent me a box of goodies the other day, including a Jambalaya mix from Oak Grove Smokehouse in Louisiana.

The tornado sirens changed my cooking plans Friday night, so I steamed it in my pressure cooker instead. (add 3 cups of water and some peeled shrimp from Florida) 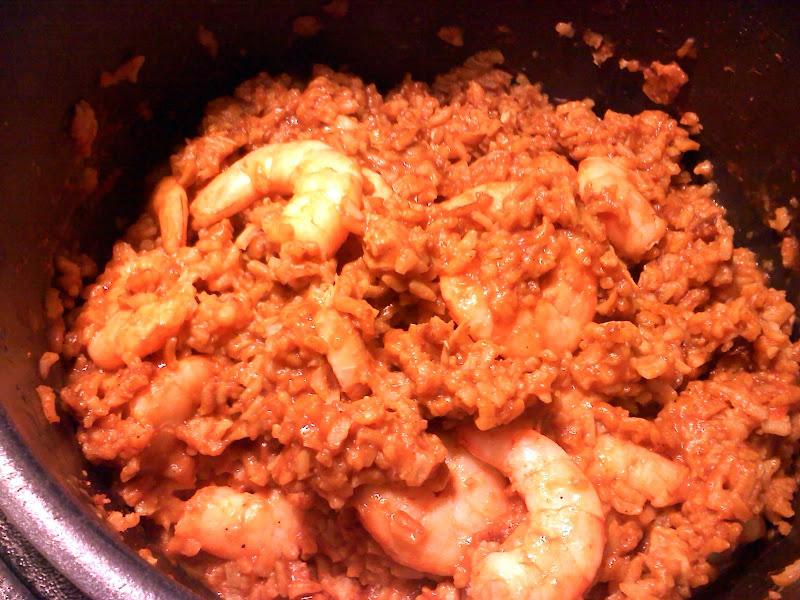 Now to have some fun with it..


Assemble the Lifeboats. (peppers nuked for 90 seconds then doused in cold water) 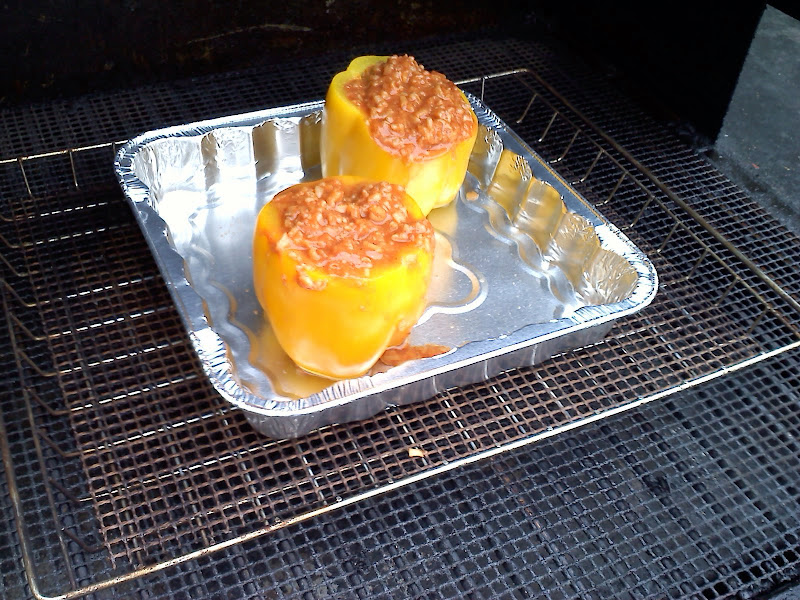 45 minutes later, the Gulf Shrimps reach for safety, and I put some garlic Texas toast on as well. 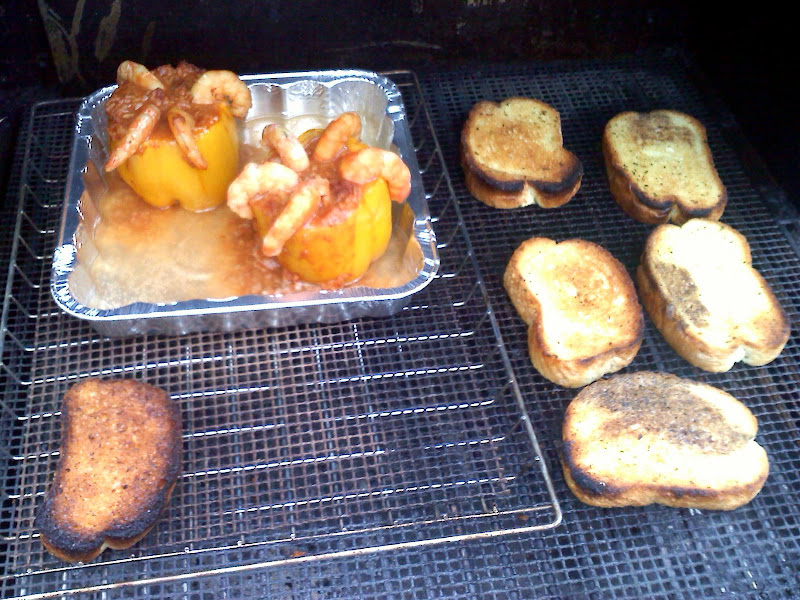 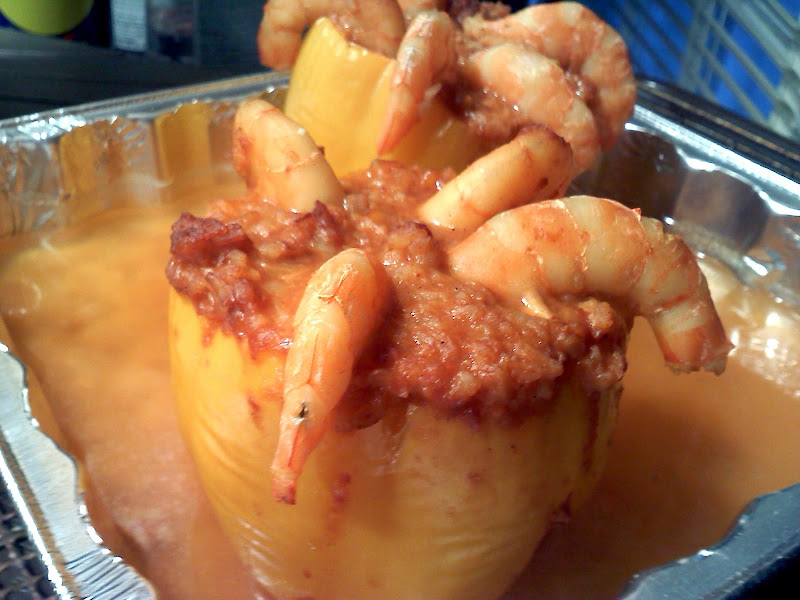 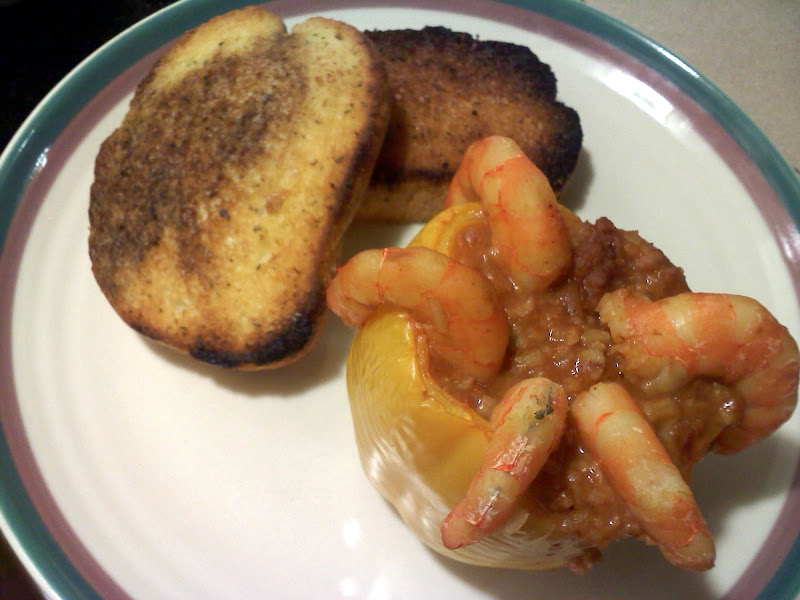 squirtthecat said:
KyNola sent me a box of goodies the other day, including a Jambalaya mix from Oak Grove Smokehouse in Louisiana.
Click to expand...


They look fantastic. That definitely falls into the category of "different" for the contest.

Found a nice 5lb Rack of Pork, Bone In, at Costco and decided to cure and smoke it with Hickory. Found some Hi Mountain Buckboard Bacon Cure at Bass Pro Shop but didn't know how long to cure it. I really learned a lot from this experience. Some good ... Some bad ...

Chose to cure it for 10 days like Hi Mountain recommends for a Pork Butt and I think that was my first mistake. I think I should have taken it to about 7 days max cause it turned out really salty near the edges. I will say that the 10 day cure did cure the entire Pork Rack but maybe 7 days would have done so also.

After curing in the fridge for 5 days I rotated the Rack of Port for another 5 days as instructed. Rinsed it under cold water and patted it dry. I think next time I will soak it in cold water for maybe 3 hours rotating the water every hour. Rubbed it with some Roasted Garlic EVOO and dusted it with some seasonings. Next time I will forgo the seasoning and just use the EVOO.

At our house it's a tradition that we must have Scalloped Potatoes with Ham or anything that's close to Ham. I use an easy recipe that I found years ago in a Betty Crocker recipe book. It calls to grease the pan, layer it with sliced potatoes, onions, sprinkle some flour, seasonings, and some pats of butter. Repeat the process 2 or 3 times and top it off with a layer of taters. Then pour some warm milk, to create the white cream sauce while it bakes, to about 2/3 full.

Preheated the MAK Pellet Grill to 235ºF using Hickory pellets. Slapped the Rack of Pork on the bottom rack and used a half rack for the Scalloped Potato casserole. Another lesson learned was that that since it normally takes 1½ hours @350º to cook the casserole it will not properly cook in time at the 235º. After 3 hours, I removed the casserole and popped it in the oven @375º for an hour.

Pulled the Rack of Pork when the Internal Temperature reached 160º. Took about 5 hours.

Sliced the Rack of Pork and they smelled wonderful.

The money $shot ... a slice of Pork, some taters, and a portion of corn ... Variety is the spice of life ;D

BP wanted to go International so I thought Id try a Russian dish that I use to love. I remember this being one of my favorite dishes as a kid but since fried foods arent as big as they use to be in my house I havent had it in awhile... I thought Id try it on the MAK with a little less frying....Not sure if it was any healthier but it sure tasted good...Added a few of my own twists to the normal recipe..

Pounded out some boneless skinless chicken breasts... Mixed some butter, diced shallot, chopped parsley, BP Little Louies Garlic salt and some Pepper together and dropped a nice spoonfull into to each breast..

Folded as tight as I could get them and secured with toothpics..Dipped into an egg wash and then Bread Crumbs mixed with some BP Desert Gold

I heated some oil on the Mak till it reached about 375 Had the Mak running at 450..
Also I had to through on an artichoke since I am addicted! Just kind of flash fried the chicken for about 4 min turning occasionally. Then removed and cranked the MAK to full power and let them cook about 15min.

Made a Parmesan Risotto to go with it..

Well I picked up this rack of pork and did it all up and went to post the pictures and
some one had the same idea. Well any way I did up some butter and garlic and injected
it ,sealed back up and refridgerated 24 hrs. Then I took it out and stand 1 hr. then EVOO and seasoned with garlic and pepper an headhunters and injected with apple juice
and put on the mak on smoke 2hrs,then bumped to 225 till 134. Then I weaved with
bacon and removed at 164.

Mak & cheese was delicious and the pork was super tasty,& moist

Wowzers! there are some gooduns this week!

What BP said...Great cooks! This is already going to be a taxing week to judge....that said, I must point out we are only two entrants short of holding BP upside down and shaking more money into the prize fund! Entries must be post mark...Uh, time stamped no later than 9pm CDT.
Last edited: Apr 18, 2011

This week I am just adding to the cook count, some pretty amazing cooks here!

Haven't touched the MAK in almost two weeks and spent most of last week at Disneyland. Driving home yesterday Daddy was thinking he needed some smoker time (amongst other things) So I hit the store and found some of these:

Hit em with a little of this

After about 2.5 hours threw the corn on

I know I do this one alot, but it's just that good! Besides it's Strawberry season here in Central CA and there are 3 stands within a mile of our house so I try to take full advantage!

Brush the butter on both sides of sliced poundcake

Poundcake and strawberries on the MAK running at 425

Serve it up with fresh made whip cream

Awesome! Now you've got me craving strawberries and we're a long way from getting fresh ones here.

Before I start, let me just say, YOU ALL CRUSHED IT this Week! Well Done!! Thanks for sharing your cooks, great stuff!!! If people don’t walk away with a larger list of things to try…then they should have entered!

Star1021Scott
- Tri Tip Salad
Looks great Scott! Trips on salad is a favorite around our house and yours looks absolutely wonderful!

FLBentRider
- Brisket and a couple of Butts
Half way to the “Sampler Platter”…just need chicken and ribs! Man does that look tasty!

Sparky
- Pork Butt ala Sparky
Great looking pork Sparky! I know your wife knows her Q, so I’ll have to try slicing on my next one!
- Sparky’s Ribs, just Ribs
“Just Ribs”? More than enough, sez I. I like making each rack different too, great looking ribs!
(btw, I wish you owed me a favor )

bflodan
- Chicken Kiev MAK Style!
Haha, nothing looking that good is ever “healthy”! But it sure looks tasty!!

Congrats to all the winners,to BP , all the cooks and to Rip for his great Judging and hope you are enjoying your new Mak Rip? Great cooks everyone. So close to that 12.

Thanks Rip, another tough week of judging with some fabulous cooks! Congrats to Deb, Pete, and Howard you guys really outdid yourselves this week.

Thanks Rip & BP. Great cooks everyone, definately some things I want to try!

Thanks Rip and BP again

Another great round of cooks