December 9 Contest...Lets get some winter action!

Come on...light up the ole pellet pooper and dazzle me....the mumber of cooks are shrinking and you guys and gals are too much die hards to let this contest thing die...

$5 bucks store credit for anyone who enters.

Sparky extra bonus of a Music Man hat if you enter with something other than ribs! ahhahaha

lol, i love ya man. i only know how to make ribs. i will start cooking this weekend. i have to work this evening bartending for a xmas party. will see the 1 stars early saturday morning. got to break out my new griddle.
Last edited: Dec 9, 2011

you can do it spark!
S

Chili grind and stew meat—hickory smoked for an hour:

The rest of the players—save one secret!— ready to be assembled:

To the pot is added the meat, onions and peppers:

After all of the remaining ingredients have been added, in goes the secret—Bronko's Chocolate Dreams BBQ Sauce (it's a made in Oklahoma item; gotta support the locals):

The resulting plate and beverage:

Last night's in-house baked gingerbread getting a quick MAK-n-Grill Grates sear (the square piece is for my mother-in-law who's not a fan of the black pepper version of gingerbread for her, IMHO):

In all, the chili turned out a little "soupier" than usual, but was great nonetheless. Other than that, I'd say it was the best chili I've made so far, thanks to the MAK! The gingerbread was great, too—spicy with a bit of sear and slight but noticeable smokiness. I must admit that my wife's suggestion was a wonderful way to start off the colder season here in Oklahoma—and the leftovers will certainly be enjoyed, too.

I put them on the MAK: After an hour on "smoke"

Finish!
We made several sauces, one with Starne's BBQ sauce and butter that was excellent!

adding the cajun spice made for a messy plate, but oh so good! 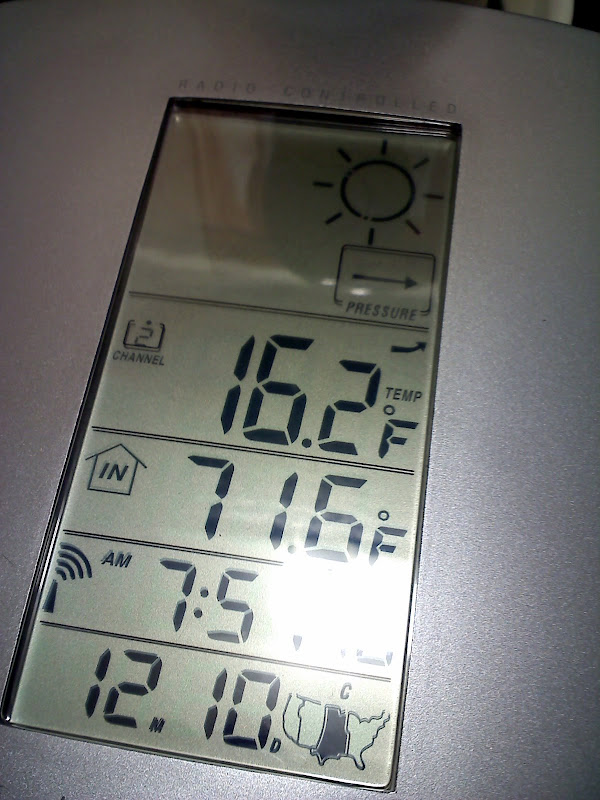 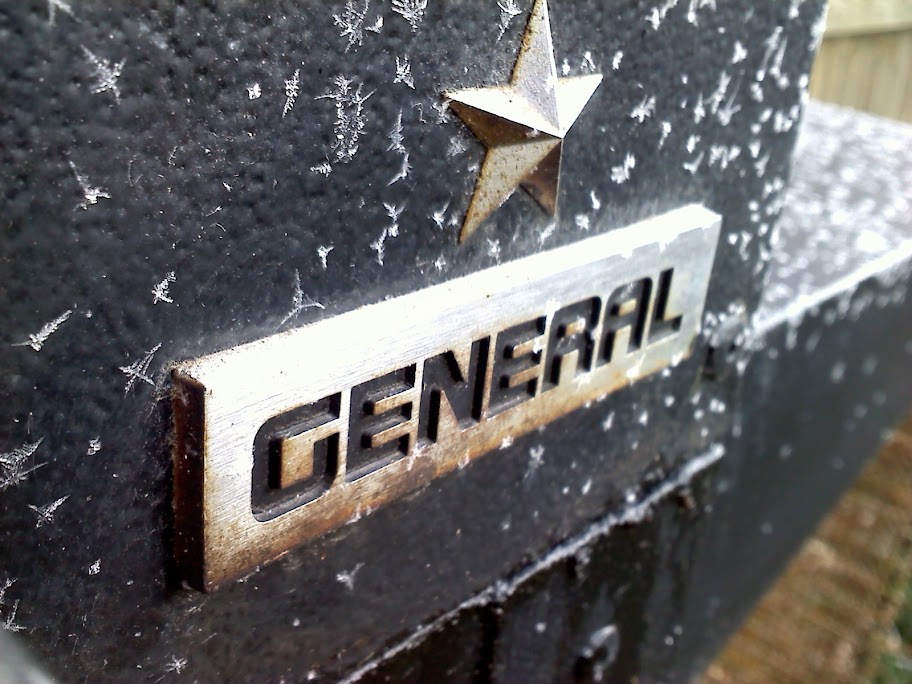 Thawing enough to get the gravy packets to split away.. 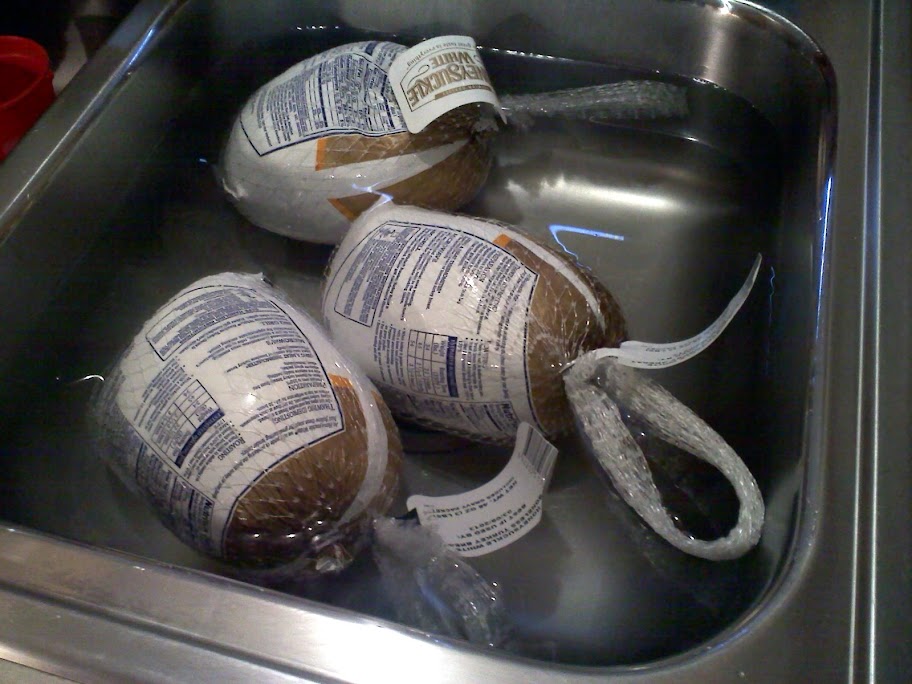 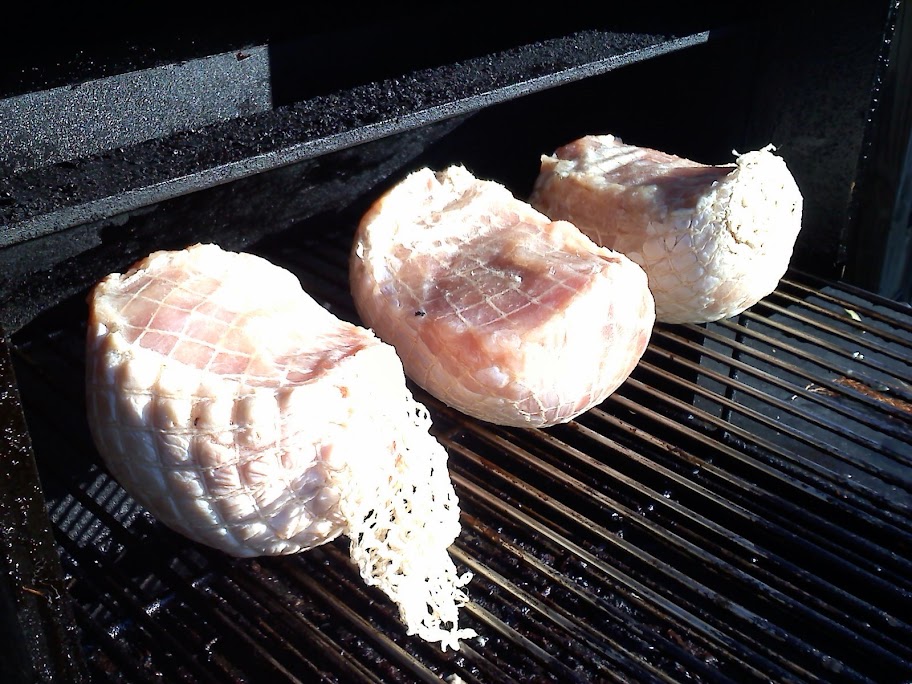 Fired the Traeger up as well. Gonna do some turkey meatballs later. 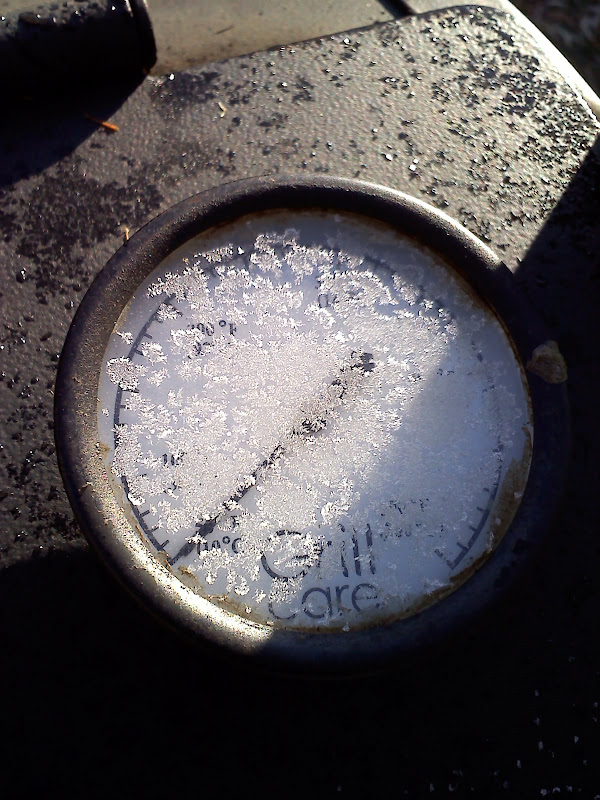 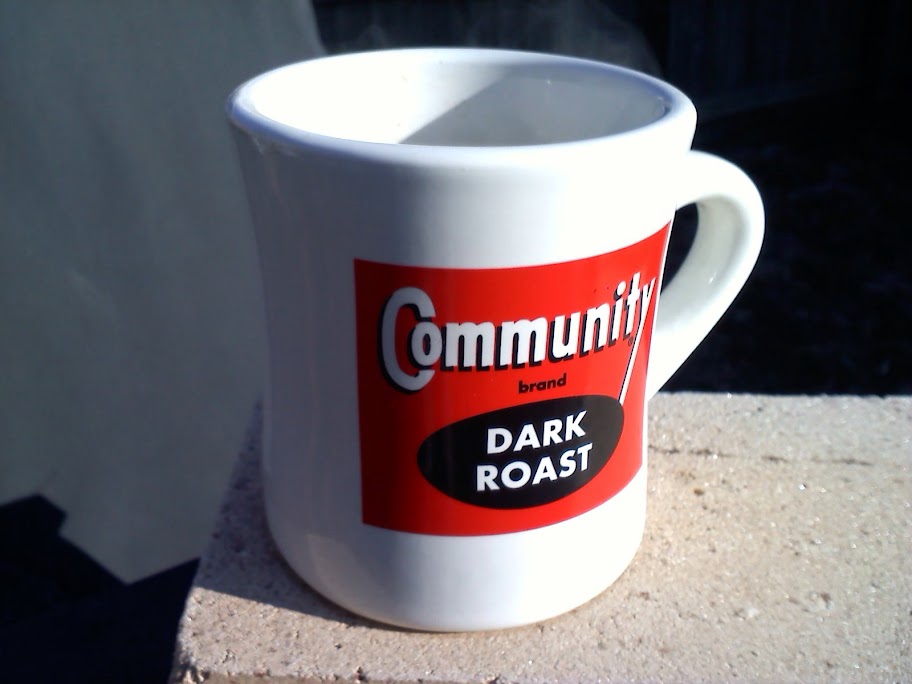 Meatballs are in. Didn't fell like messing with the bacon today. 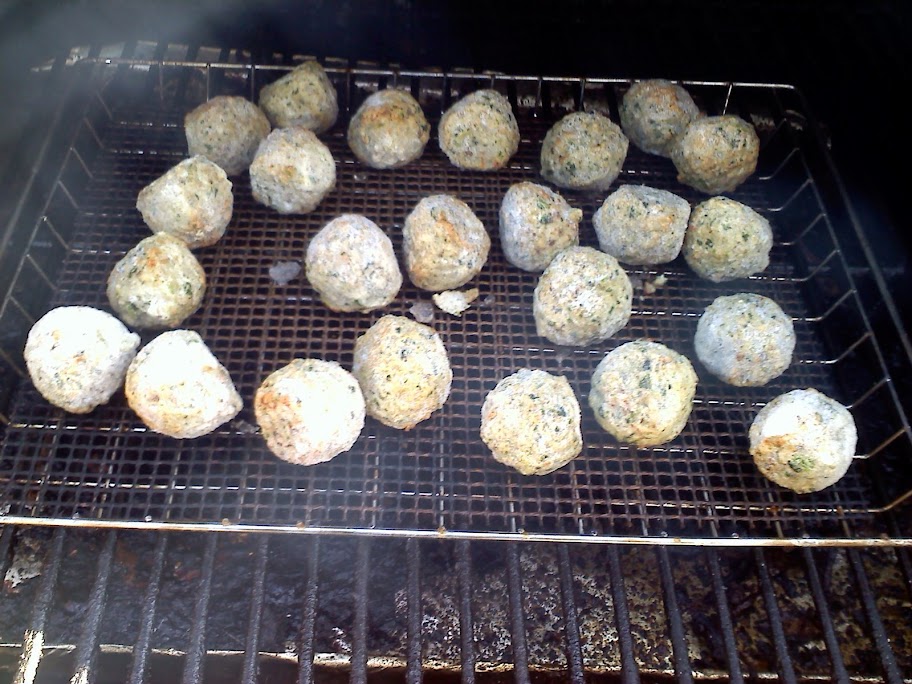 Sentries are posted. They aren't nearly as excited about today's assignment. 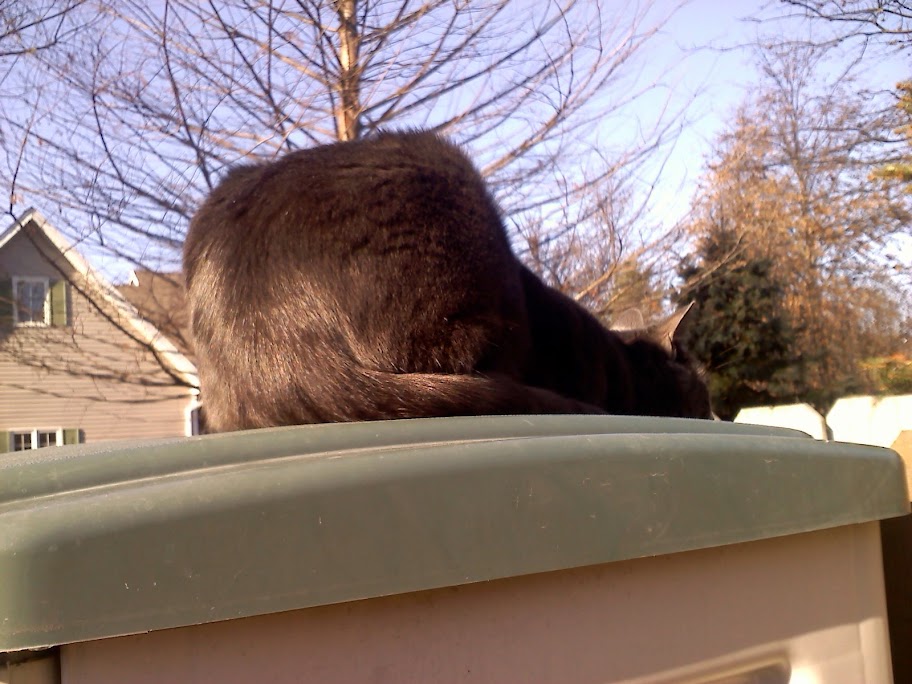 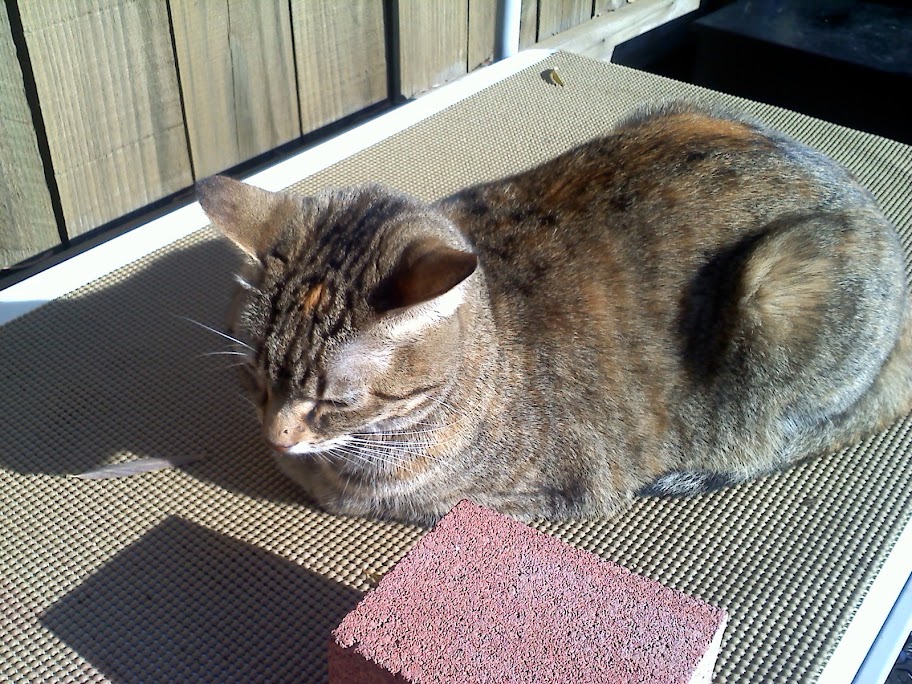 Getting some nice color now. Maybe another 45 minutes and they will be done. 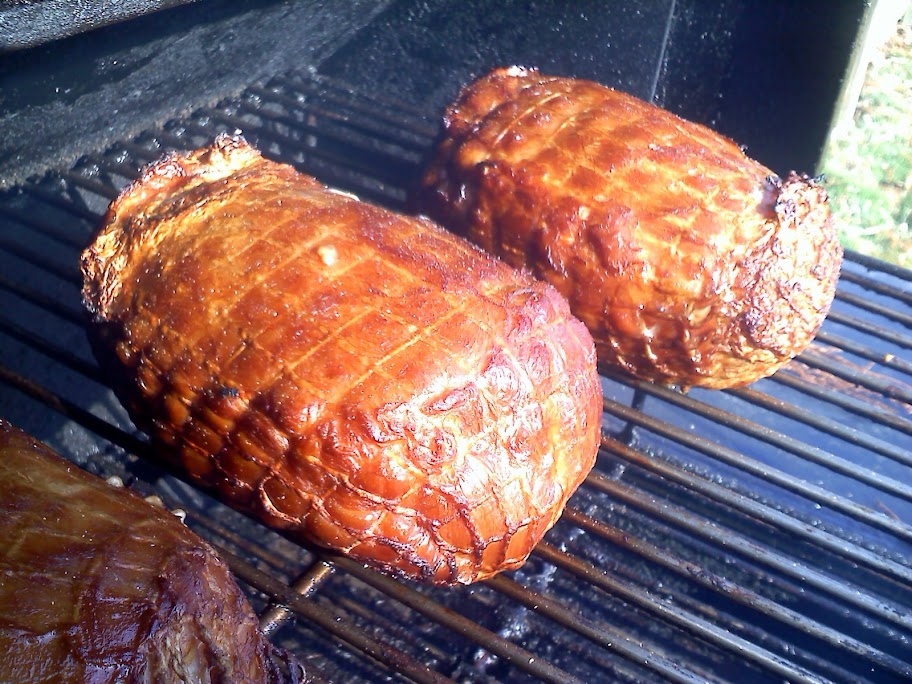 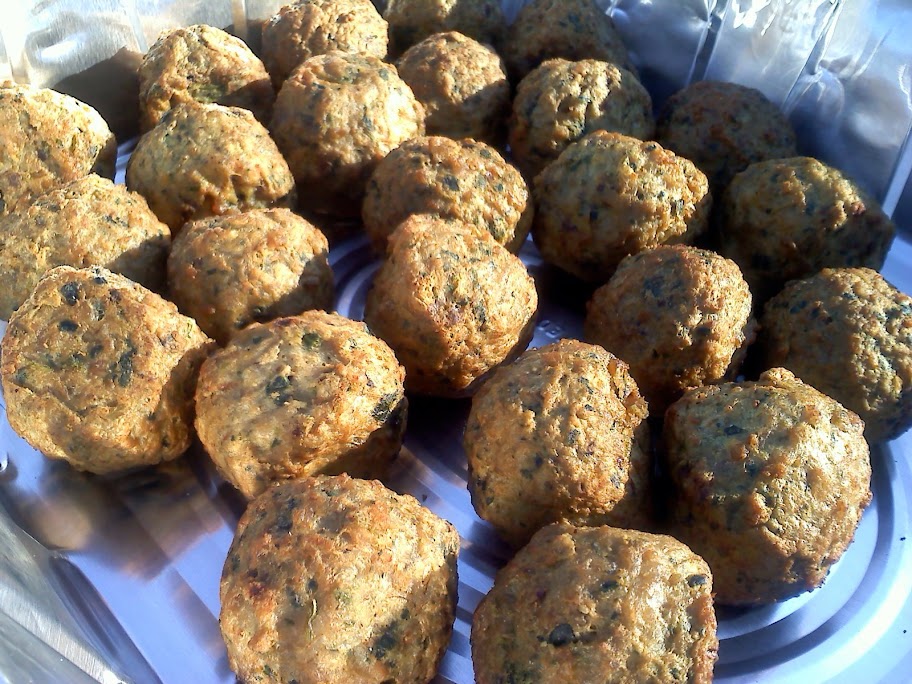 And into a crockpot of dumpster spaghetti sauce to get happy.. 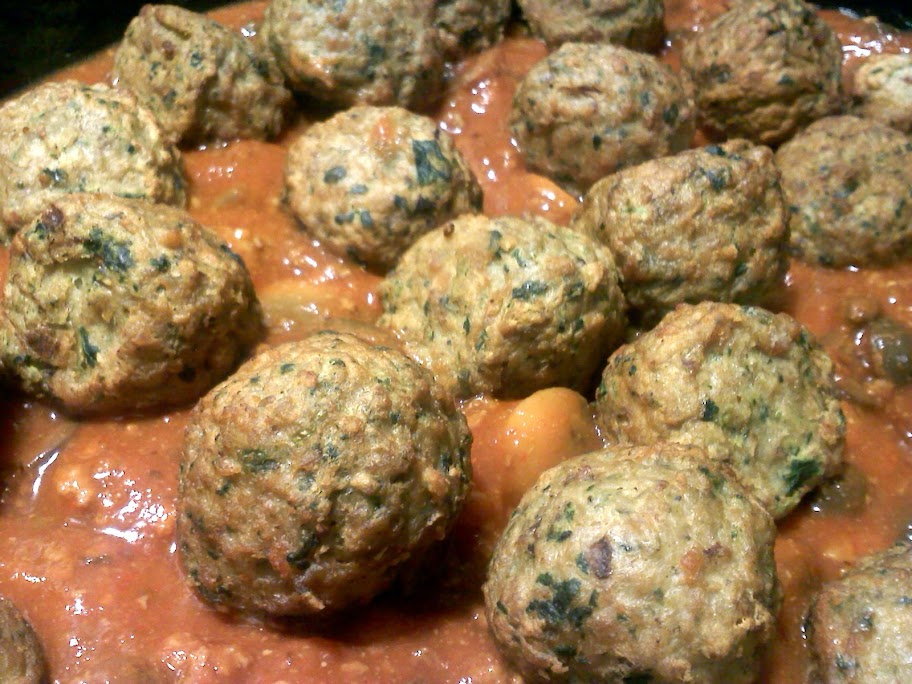 Boulders are done as well. Gonna rest in FTC for a while, then I'll strip the netting off and toss them in the fridge overnight. 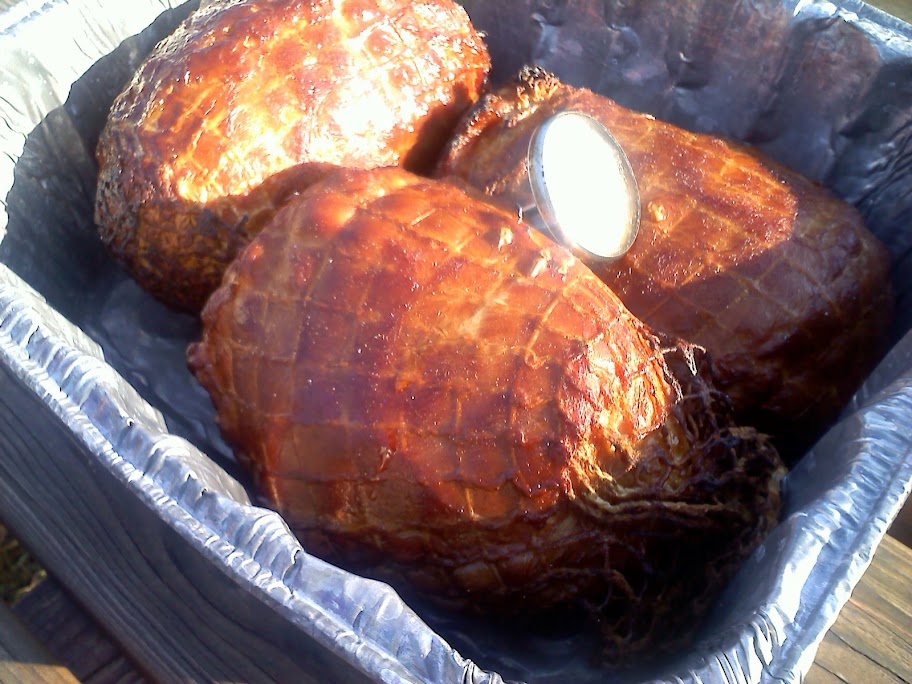 One will be cubed and frozen for some Turkey Noodle soup later this week (or next), one will be sliced thin and vacuum sealed for sandwiches, and the 3rd will be dinner.

Started with this little guy-

Hit it with a nice dose of Double Secret

Looking good after about 3 hours

Pulled and rest about 20 minutes

Season up some Asparagus with EVOO and Desert Gold

Slice up the meat

One of my favorite meals, and it always comes out perfect on the MAK!
Last edited: Dec 11, 2011

this cook is for the 1st place prize and a ernie ball hat. ya for me. i thought i would break out my b'day presents.

sausage is done. time for some hash browns. griddle time.

put on my 2 favorite rubs on them.

where not done yet.

ya baby. made some bisquick pancakes.

made 2 patches of pancakes. breakfast is served. and once again, no kids. my wife got her plate and i got one. and a 2nd one too.

I mixed up a marinade with Hoisin sauce, ketchup, brown sugar and about 5 cloves of garlic. Then decided to open the spice cabinet and decided some red pepper flakes might be nice and OH, there was an open bottler of red wine on the counter and I added about a quarter of a cup of that, mixed everything again and poured the marinade into a zip lock bag with the tenderloin to soak up some flavor for a couple hours.

I put the tenderloin on the Weber with cherry pellets.

The meat came off the grill when the internal temp hit 160 and it rested while I put together the sides.

And here is the plated shot:

I served it with zucchini squash with sun dried tomatoes and butternut squashed mashed with butter, salt and pepper and a little brown sugar.

The meat was moist and tender and perfectly cooked. The flavors mingled nicely together and the addition of the red pepper flakes gave just enough zip to balance the sweetness of the brown sugar and ketchup.

Sorry... First time uploading pics!! Now I have the hang of it!!
C

No doubt it's chili season, even though today was a pretty decent day with temps in the 30's during this cook.

Gathered up the fixings. (The Pacificos will drank by the cook, and not used as an ingredient)
Not pictured is the bag of frozen tomato's from this years garden.

The ground beef was placed loosely on frog mats interspersed with onions. This was lightly seasoned with BPS Little Louie's and Soileaus. Then on to the MAK for 30 minutes of smoke. After 30 minutes the meat and onions were taken inside and chopped, then into the cast iron pot for some more browning...looked like this just before the rest of the ingredients were added.

The little pies on the left are strawberry with a chocolate truffle (or two). The pies on the right are chili and the top two chili pies will be covered with cornbread mix instead of pie crust. The chili pie and cornbread chili pies are experiments and will be made in larger sizes if deemed worthy. About the cornbread...I'm the only one in the family who likes cornbread...I need to change that. My wife says cornbread is too dry. I told her I was going to try a cornbread recipe from one of our forum members...she urged me to try one from the Internet (you know, with ratings, so you know what people think). I told her it was Deb's recipe...she said, "Oh, ok." So Deb, no pressure here, right? Read more about Deb's recipe here: http://www.pelletsmoking.com/pelletsmoking-com-gallery-10/cornbread-2570/

Brought the cornbread in to rest, (skipped the bacon and garnished with jalapeño slices).

First up is chili in a bread bowl, this was very tasty!! Here's a strawberry chocolate truffle pie. I have made these before so it was no surprise how good they were. Man am I full!

Thanks for sharing the cornbread recipe Deb!

Amazing RIP.. such a talent!
B

Threw on a rack of Short Ribs and a Chicken onto the MAK.. Both rubbed with some of our favorites...

Short ribs went on smoke setting for an HR and then 275 for about 4 more hours... Chicken went on for the last hr of the short ribs and then upped the MAK to 350 and let short ribs rest for a bit...

After resting for about 40 min under foil, cut them up and mixed with some Pepper Plant and back on the MAK while the chicken finishes..

Pulled the Chicken at 168 and removed the Short Ribs and a balsamic marinated artichoke that we added on.. Chicken just fell apart it was so tender and juicy!!!

2 Hour Ribs on the MAK

In a recent thread Cmack1 recently asked about doing quick ribs. Well, between music at church, The kid's Holiday School band concerts & the Community band our family is in, this was an extremely busy music filled weekend.

With barely any time to cook what better time to test a quick two-hour rib method on the MAK.

The MAK was prepped by adding a pan of water and a packet of 100% apple wood pellets to the drip pan. The Idea was to add moisture to protect the ribs from the high heat and aid in smoke absorption and hopefully get at least a small smoke ring. The Packet of pellets would hopefully smoulder at the higher temps I wanted to use adding a little more smoke flavor. 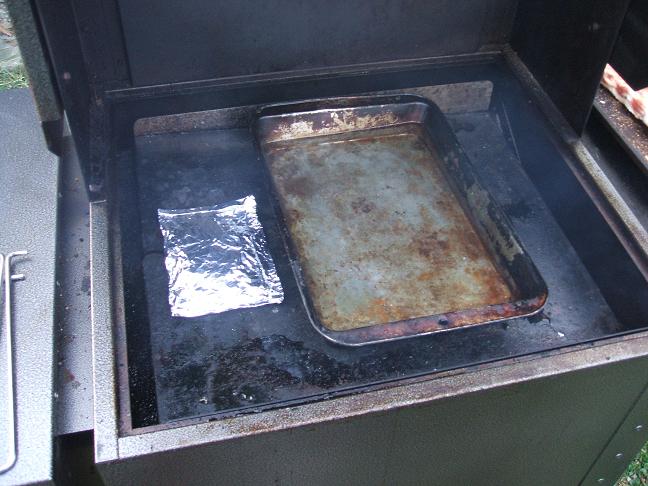 The ribs & tips received only a light sprinkling of some Smokin' Guns "Sweet Heat" rub. 15 minutes on smoke mode then 1 hour 45 minutes at 350° 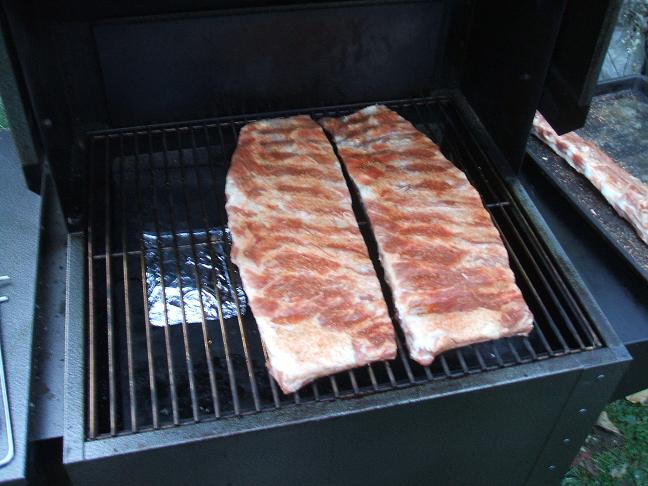 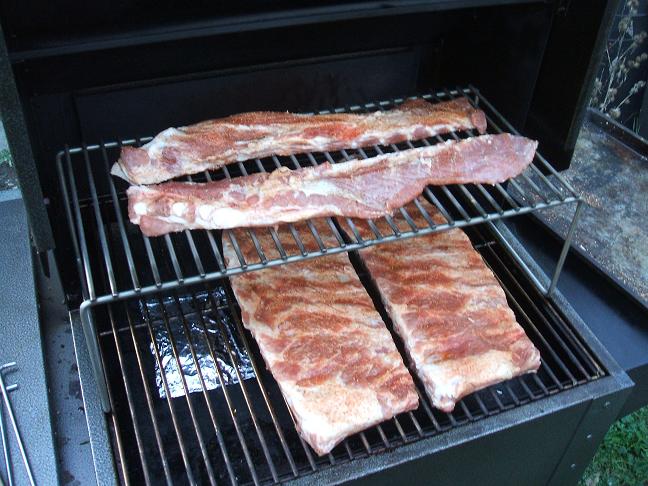 I mixed up some homemade BBQ sauce, some melted butter & honey. 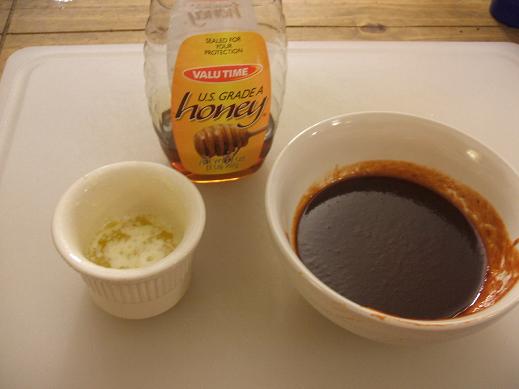 With about 10 minutes left the ribs looked like this: 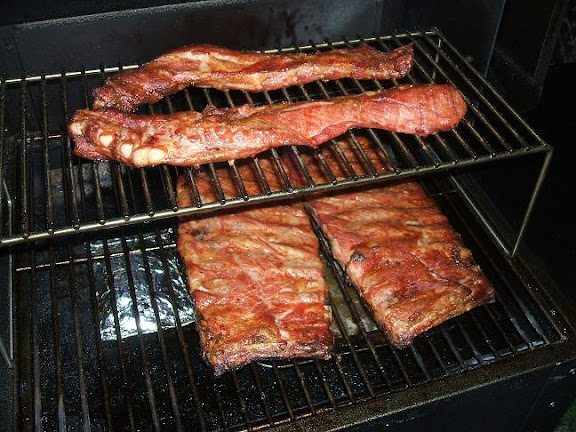 Quickly Sauced and lid closed for the last 10 minutes. 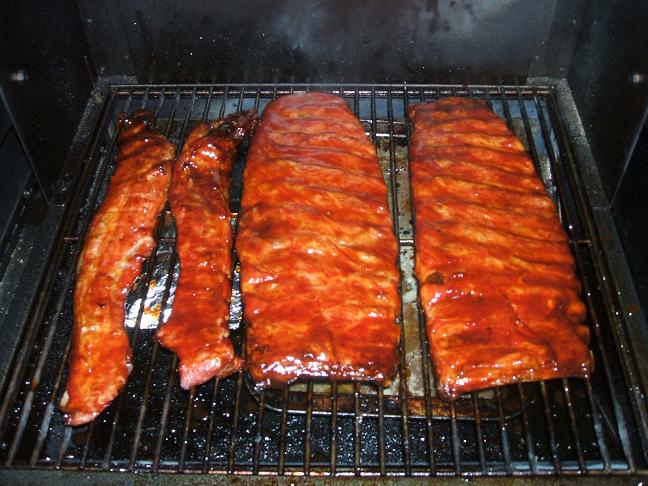 Time to slice & see how they turned out... 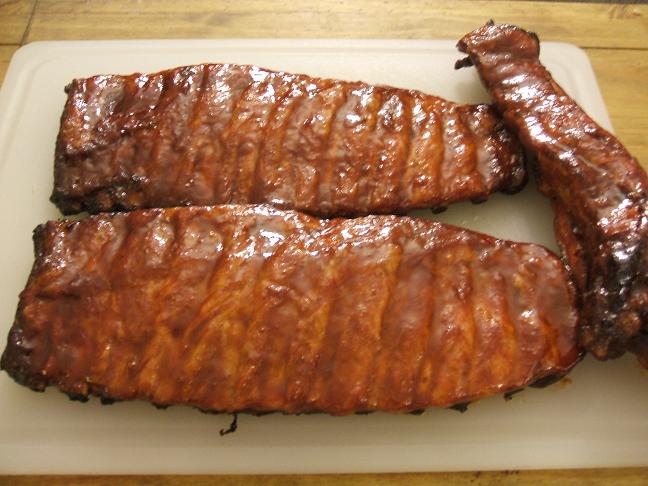 So far so good. A slight smoke ring and while not the most tender, definitely tender enough to eat. 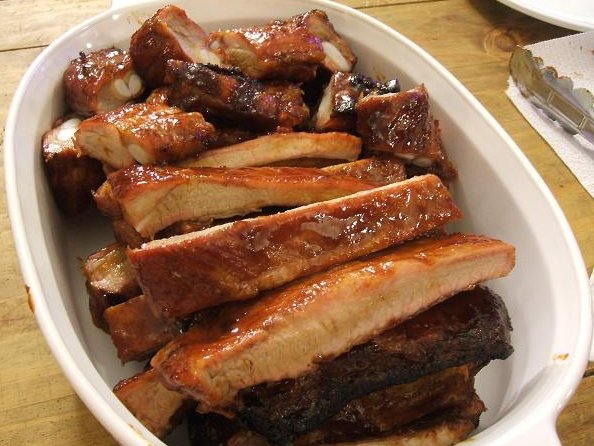 I believe the water pan & pellet pack did their jobs; they had a decent smoke flavor and light smoke ring. For being short on time, all in all I'd say these ribs, while not the best, were still pretty dang good!
The family seemed to like them. 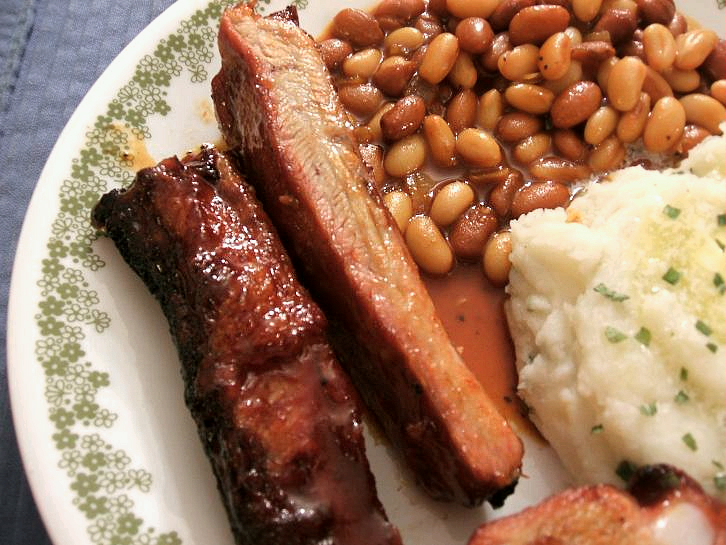